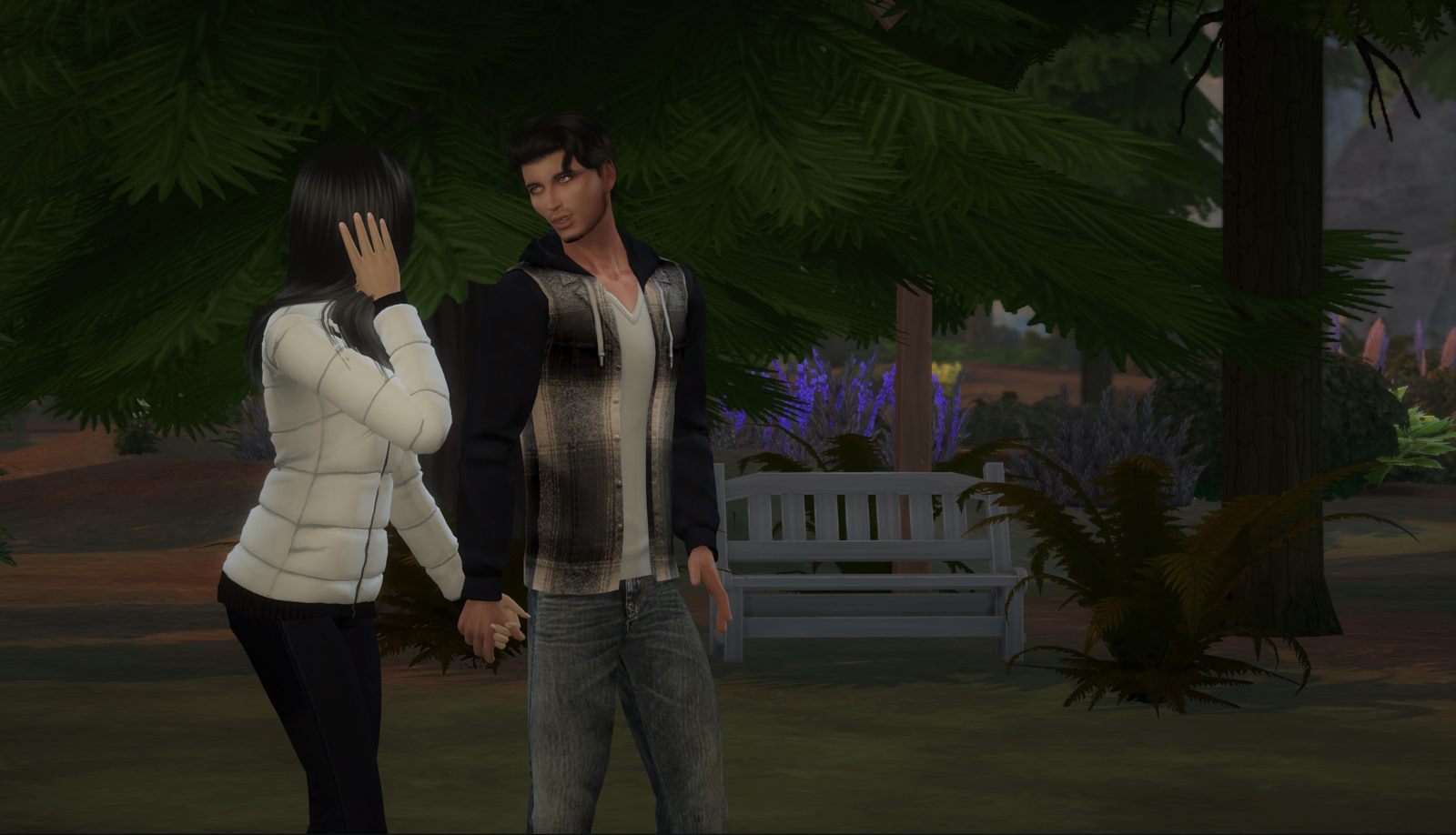 “Are you going to make it grandma, or do I have to carry you?”
He swept her up into his arms. 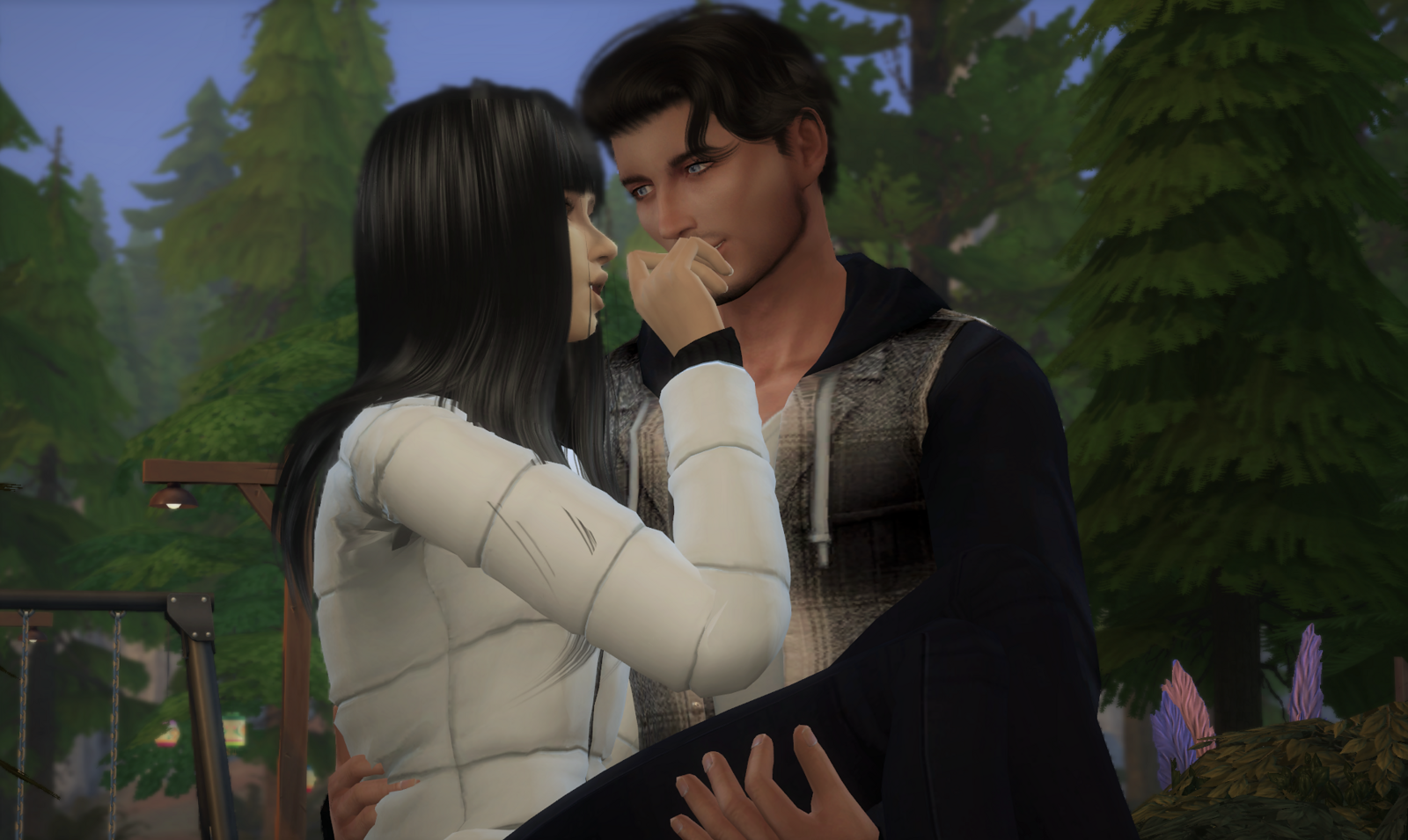 “I’ll give you grandma! I am fine. Your legs are longer, so you are faster. I thought you said go for a walk, not RUN for a walk, Indiana “KC” Jones!”
“Somebody had a spoiled Cheerio in the bunch today.” he kissed her. 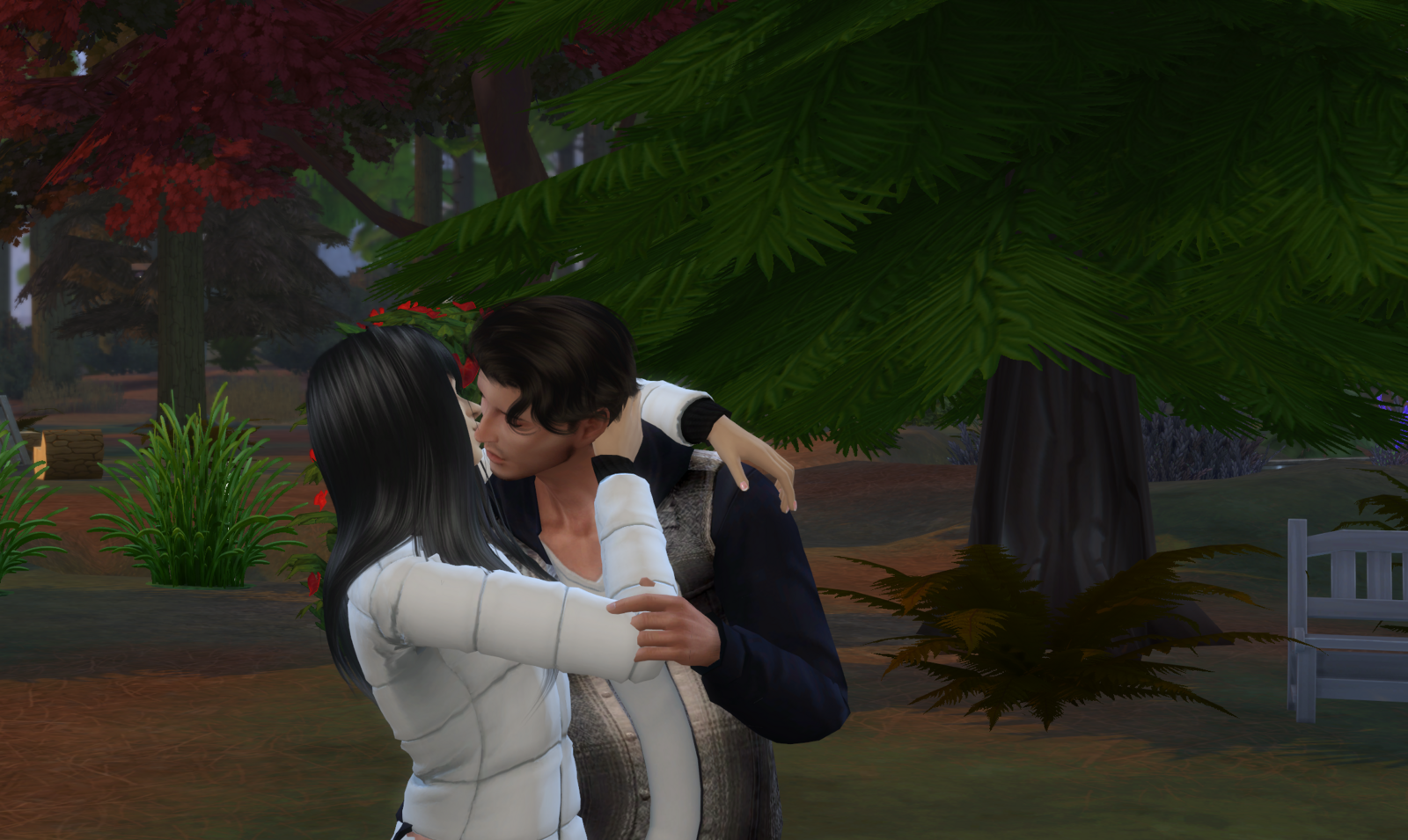 “Yup, and he is walking right next to me right now ..”
“Aww. Your Combat Barbie is showing again … and had to wear heels to go hiking …”
“Maybe you rather look at THIS?” Ever said and flipped him off.
He swung her around while kissing her. Once the kiss ended she could not believe the beautiful view of a waterfall before them 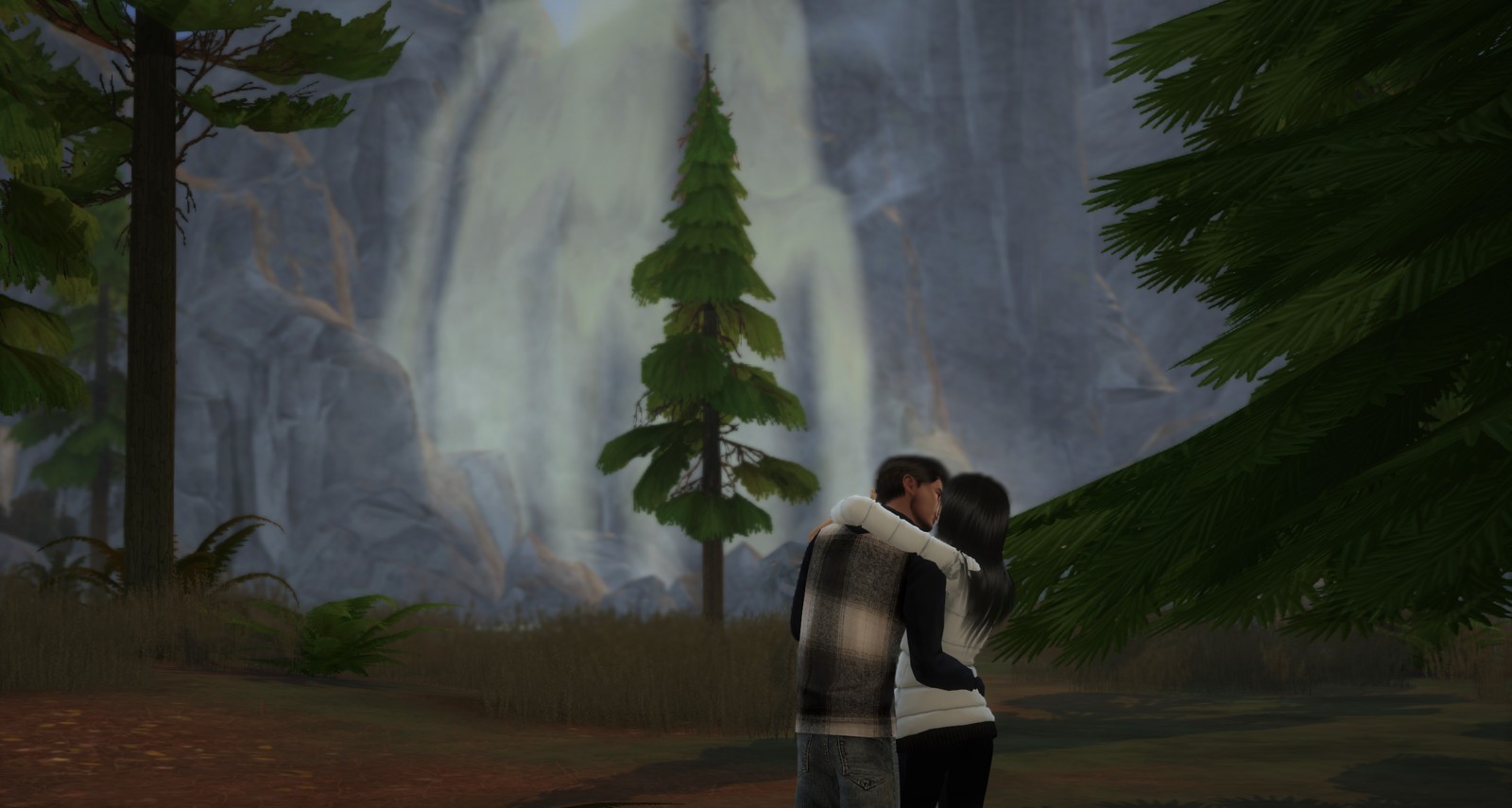 Afterwards he took her down some more forest paths until they reached a small pond.
“Here we are. Do you know how to fish?”
“Sure, KC. That’s one of the base classes when you study Architecture.”
“Maybe your dad or grandpa took you.”
“My dad and grandpa would be too afraid to break a nail. They are not outdoor kinda people.”
“Well, your awesome boyfriend will teach ya. I’ll turn Combat Barbie into Park Ranger Barbie in no time.”
“Yay. My biggest dream ever.”

KC ignored her moans grinning while he got the fishing poles ready, explaining it to her as he went.  Finally they were at it. 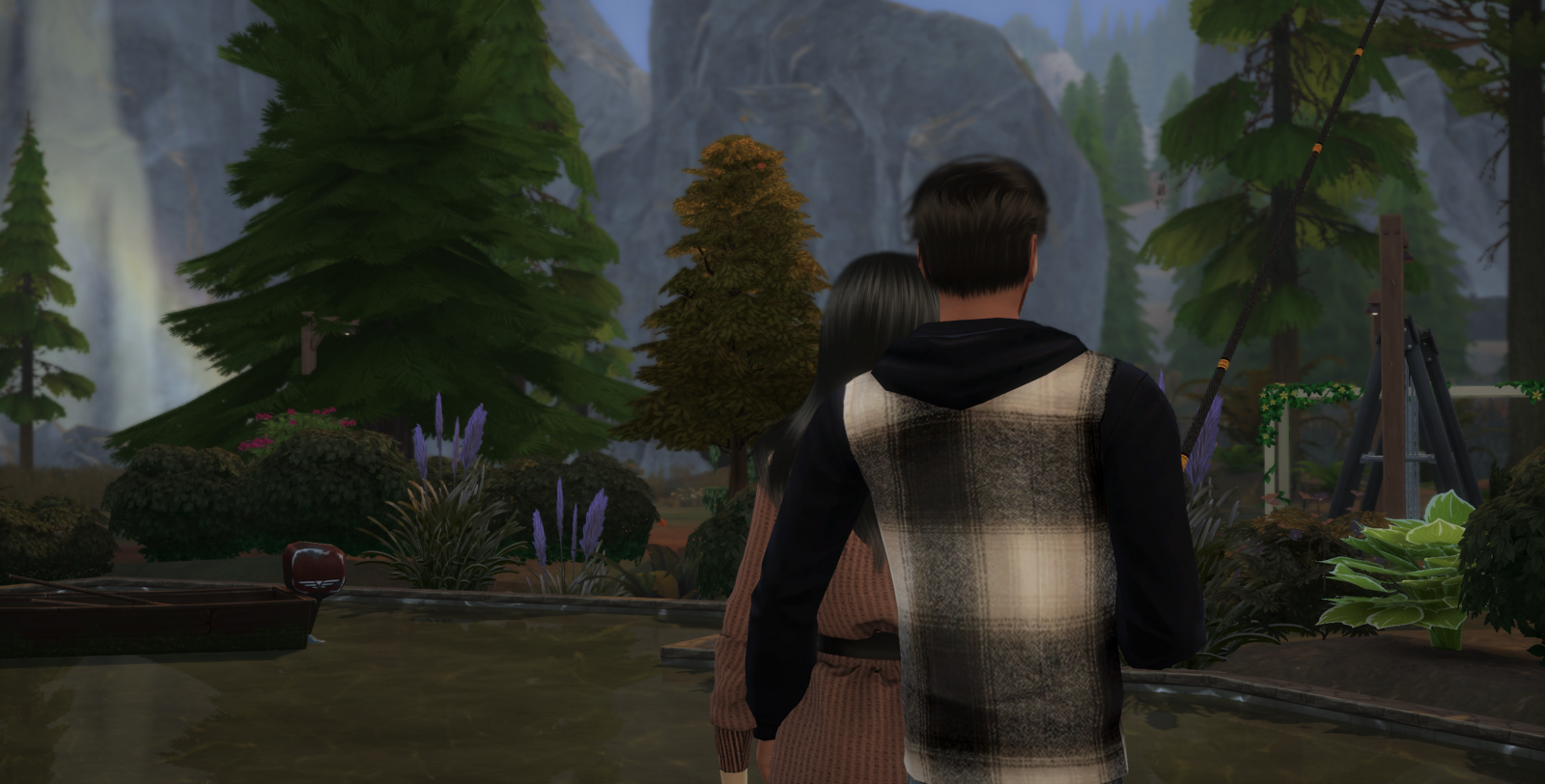 It did not take long for Evey to lose interest in standing stiffly with the rod in hand, so she let KC worry about catching them dinner while she played in the water, watching the reflections from above and the fish moving below.
Everleigh just about fell head first into the water when into the silence KC suddenly said. 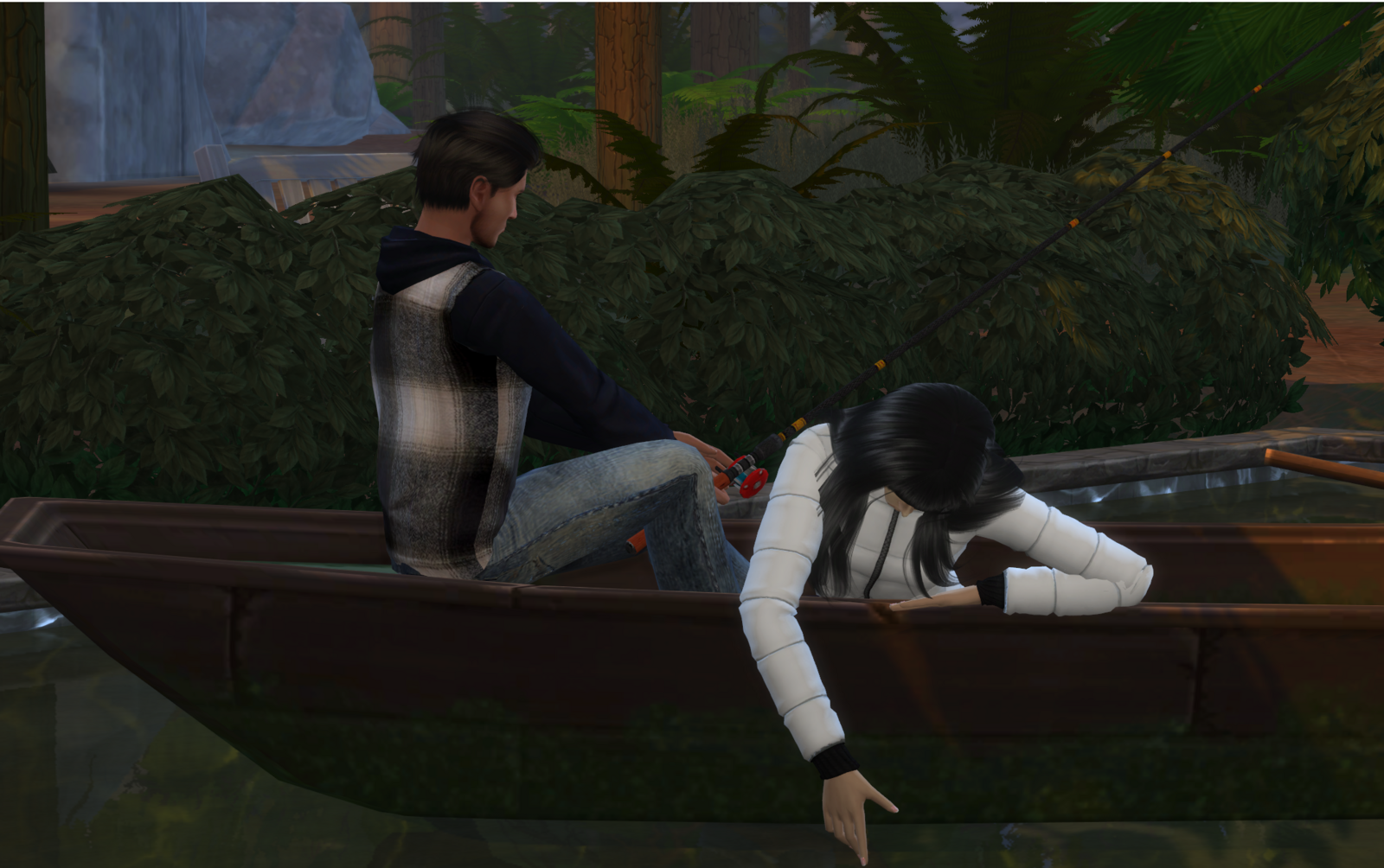 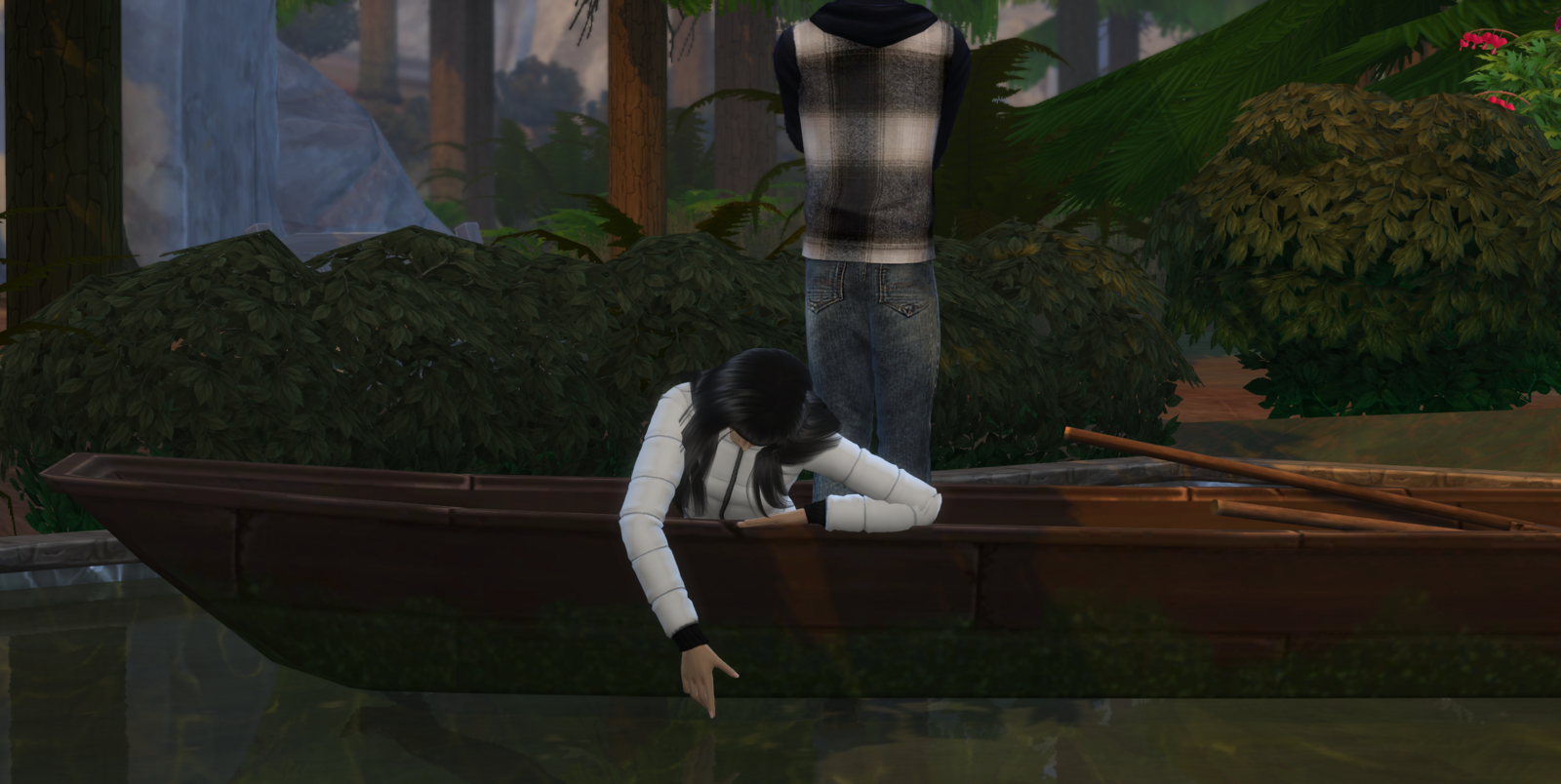 “I thought you never wanted a kid!”
“I didn’t. Not the way my life was going. And let’s face it, I am not exactly from the greatest breeding stock. But everything has changed. I have changed. You and your family have changed me. Your grandparents have taught me so much, and I can see it now. With you. I hope I will be like your grandpa one day.”
Everleigh said nothing to that. Too shocked.

She had never even wasted a single thought about if she ever wanted kids, and if so, how many.
Or if she ever even wanted to get married. Maybe yes, maybe no.

She was 19 years old and in the middle of college for crying out loud. Had everybody lost their minds now? Who even thought of settling down before their life had even really begun?

Before long they had enough fish for dinner and were on their way back to the cabin.

KC had wanted to rough it in a tent, but Everett had insisted on a small cabin instead.
They did as requested even though KC kept complaining jokingly that in a tent he would at least not have had to worry about waking up with Heath next to him in their sleeping bag.

They had been here for three days now and it had been everything between heavenly and hellacious alike. Everleigh hated the bugs, the bathrooms – or lack of proper facilities – and the blisters from all their hikes together.
The time alone with KC was amazing.
He was funny, knowledgeable, strong and fearless. And surprisingly attentive and romantic. Plus here at night they did not have to worry about anybody walking in on them.
KC had been in a stellar mood ever since they had arrived here.

Before they left, that had not been the case. For a while Everleigh was afraid he would break up with her, as he was very upset about the latest KC vs Heath incident. No matter what Everleigh tried, he stayed mad. Secretly she was praying that Heath would not show up at the cabin or it all would vortex out of control for sure. With no sign of his adversary and much alone time KC seemed appeased and his mood skyrocketed.

Finally they sat down for dinner, grilled catch of the day a la KC, which smelled delicious.

“Smells great, baby! I am ravenous!”

“Night fishing? No thanks!”

Once finished and cleaned up they went indoors, snuggled up, when KC told her
“Now that I got you too fattened up to run from me, I have something important to discuss with you. Been thinking about it a lot, had to connect the dots in my brain first, but I think it is ready for the printers now.”

Everleigh was afraid that he would propose. She loved him, but WAY TOO SOON.
“We’ve been through some rough times recently and I really worried about us for a while. Which is why I came up with a solution. Let’s move in together. Just you and I.” 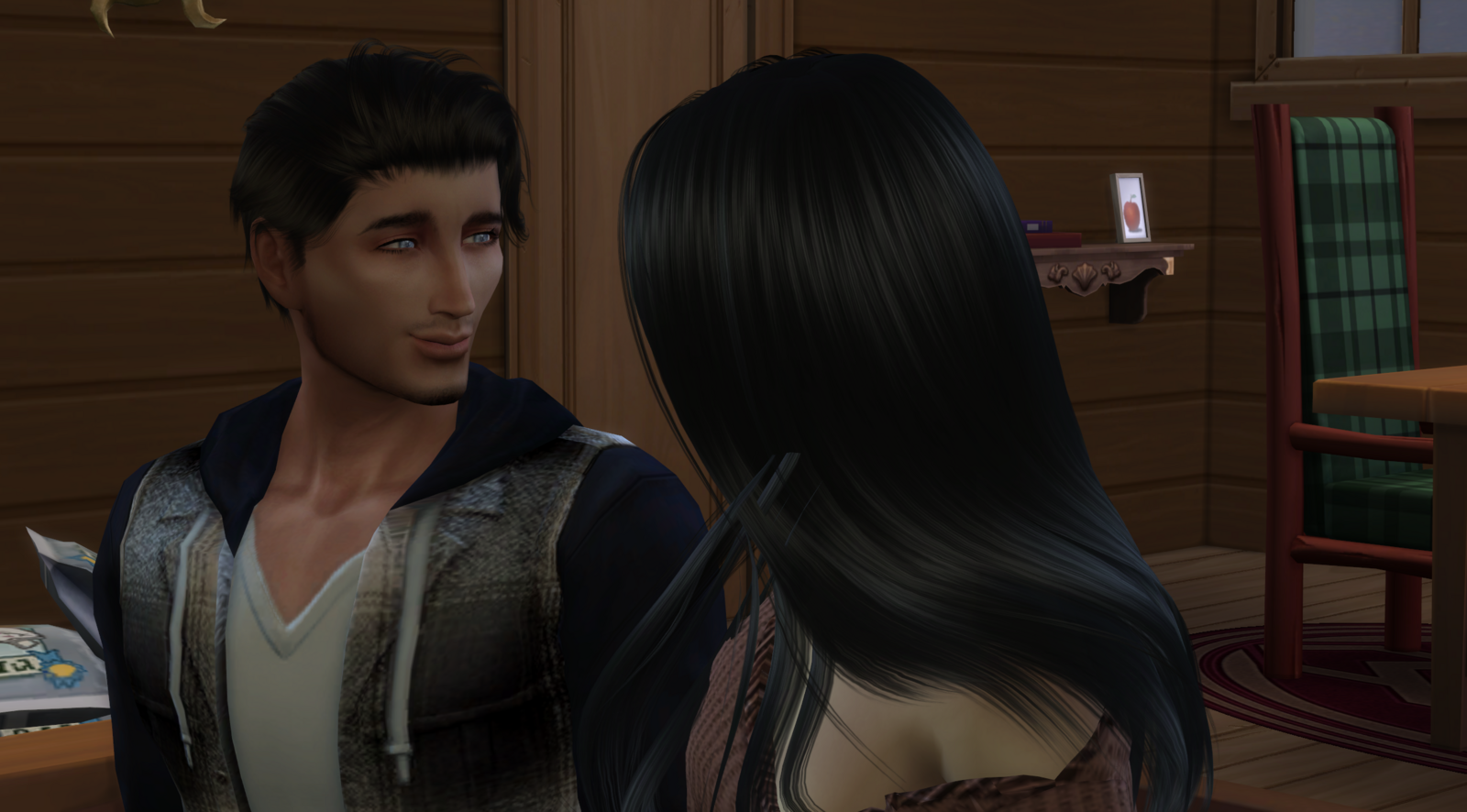 “What?”
“Yeah, we’ll find a small place near campus. I’ll find a job, just something to pay the bills. After you graduate we can still move back to Brindleton Bay, or maybe somewhere else. Maybe we can save up and have you design a house for us. Not a temple, obviously, but something we can manage to save up for.”
“Oh … WOW!” 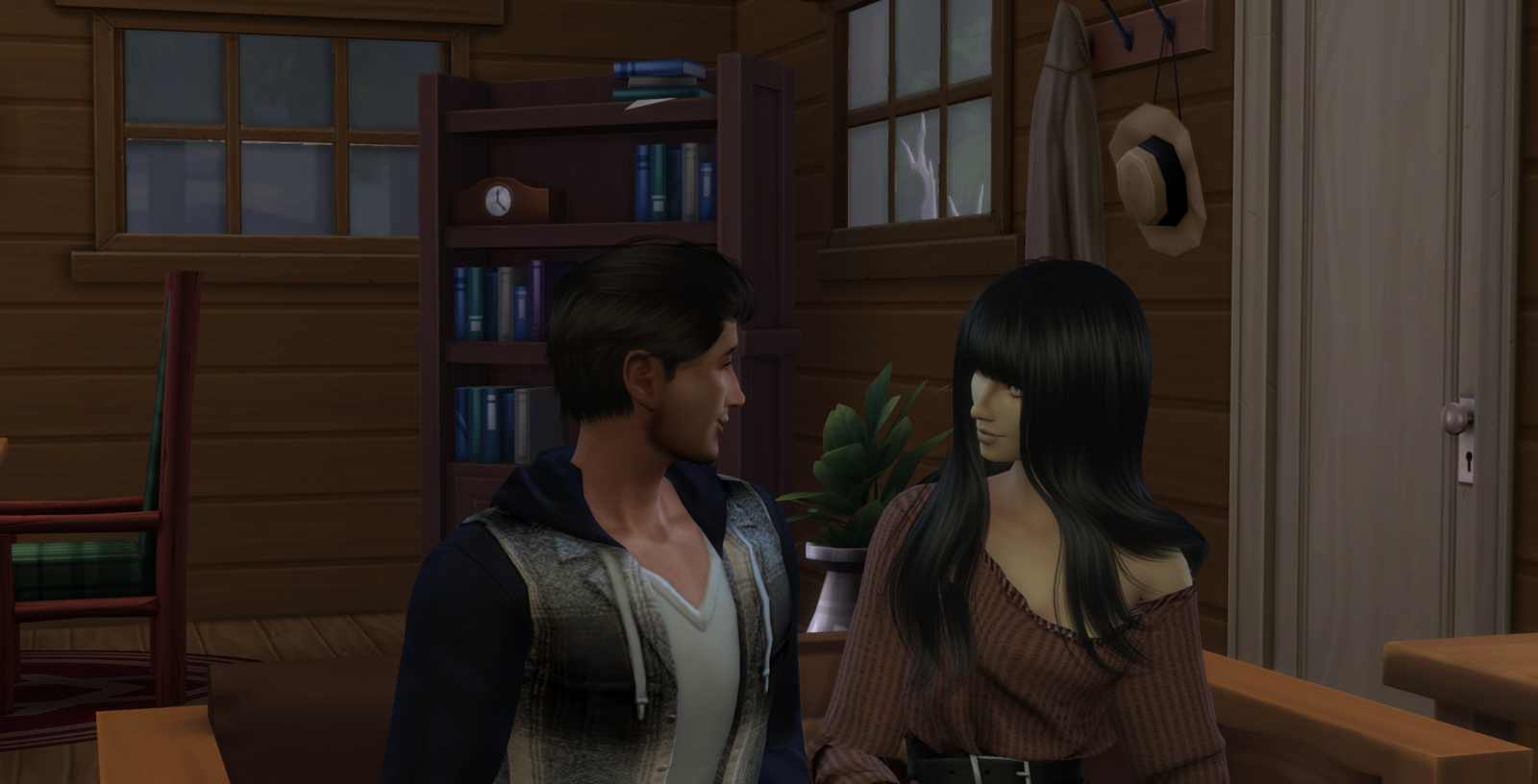 “Is that a good wow or a what-the-hell-KC? Wow?”
“To be honest, a little bit of both. Moving out had not even crossed my mind.”
“Look at the bright side, saves you from babysitting duty for your lil bro. And we can always take the train and visit with everybody. I am sure your grandparents wouldn’t mind us staying there again.” 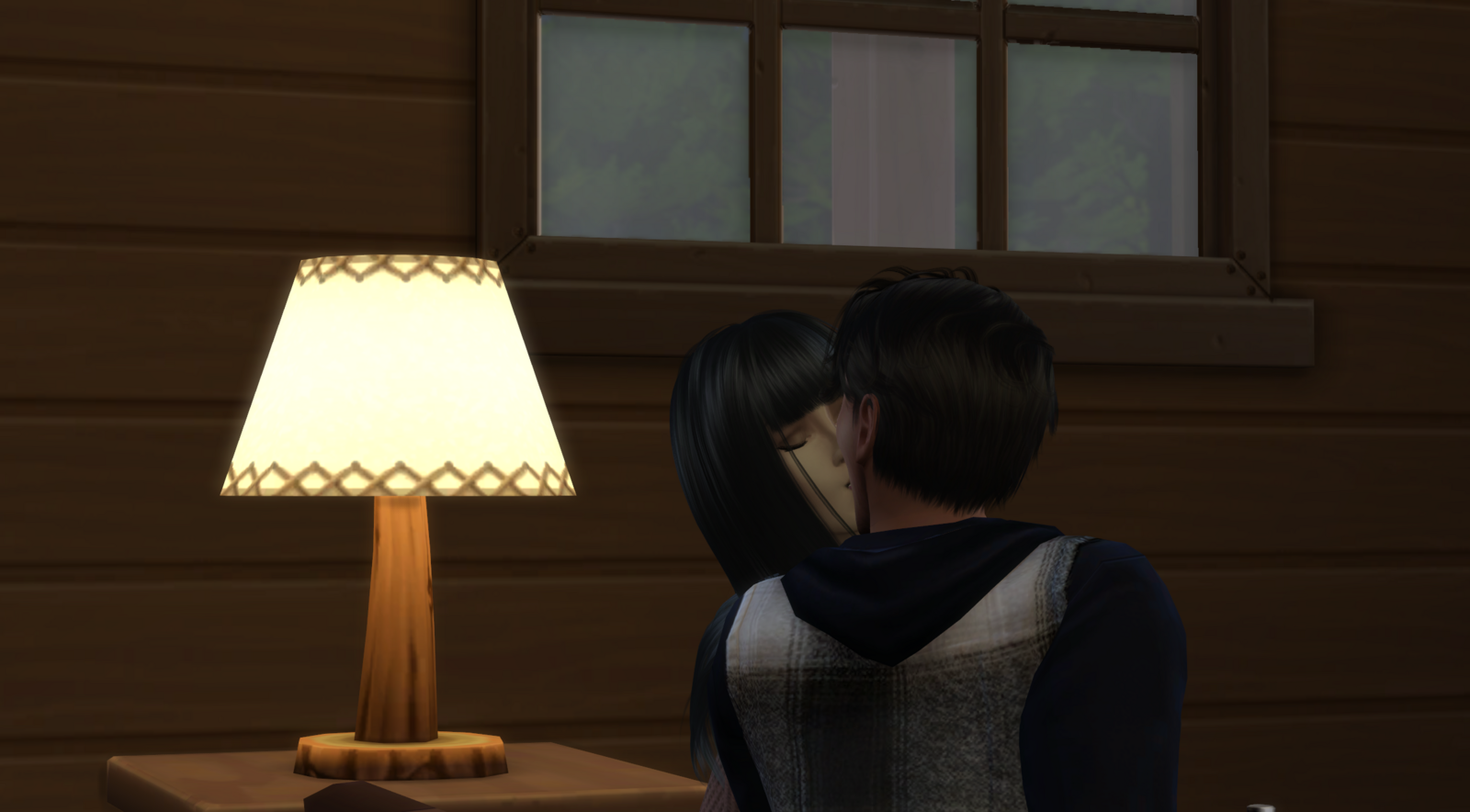 Later that night, in bed, during another one of the many very romantic and intimate moments with KC Evey was distracted, pondering the new development. Part of her loved that KC was this serious about them, especially after the rough seas of late. Another part of her had always imagined her living on her own at some point. Just her. She was a bit of a Loner sometimes, needing time away from everyone. KC was loud and boisterous. Hard to see him giving her space when she needed it.
If she declined he would be heartbroken and possibly take it the wrong way. As if she wanted to keep him at distance, and knowing his jealous tendencies, possible think that her hesitation was because of Heath too. Oh Heath. If she were to move in with KC and he ever showed up … oooomph. And if he didn’t, how would she ever see him again?

Maybe it really was time to cut ties with Heath.
Sweet Heath.
Although, had not been all that sweet of late. Somehow it seemed like he had been patient with her for as long as he could muster, as if he had been hoping she would choose him eventually. As time went on, he seemed to run out of patience and become more pushy. And impatient.

Maybe everybody was right. Maybe their friendship had run its course. After his recent outburst she was not so sure how safe she still felt with him …

But could she really do it?
She had missed him so much those 7 months after he freed her from those other vampires by paying with his treasured humanity, or at least so they all thought.

But she had to make a choice. Something had to give before everything would spiral out of control.

While busy between the sheets, neither of the young lovers noticed that they were no longer alone … 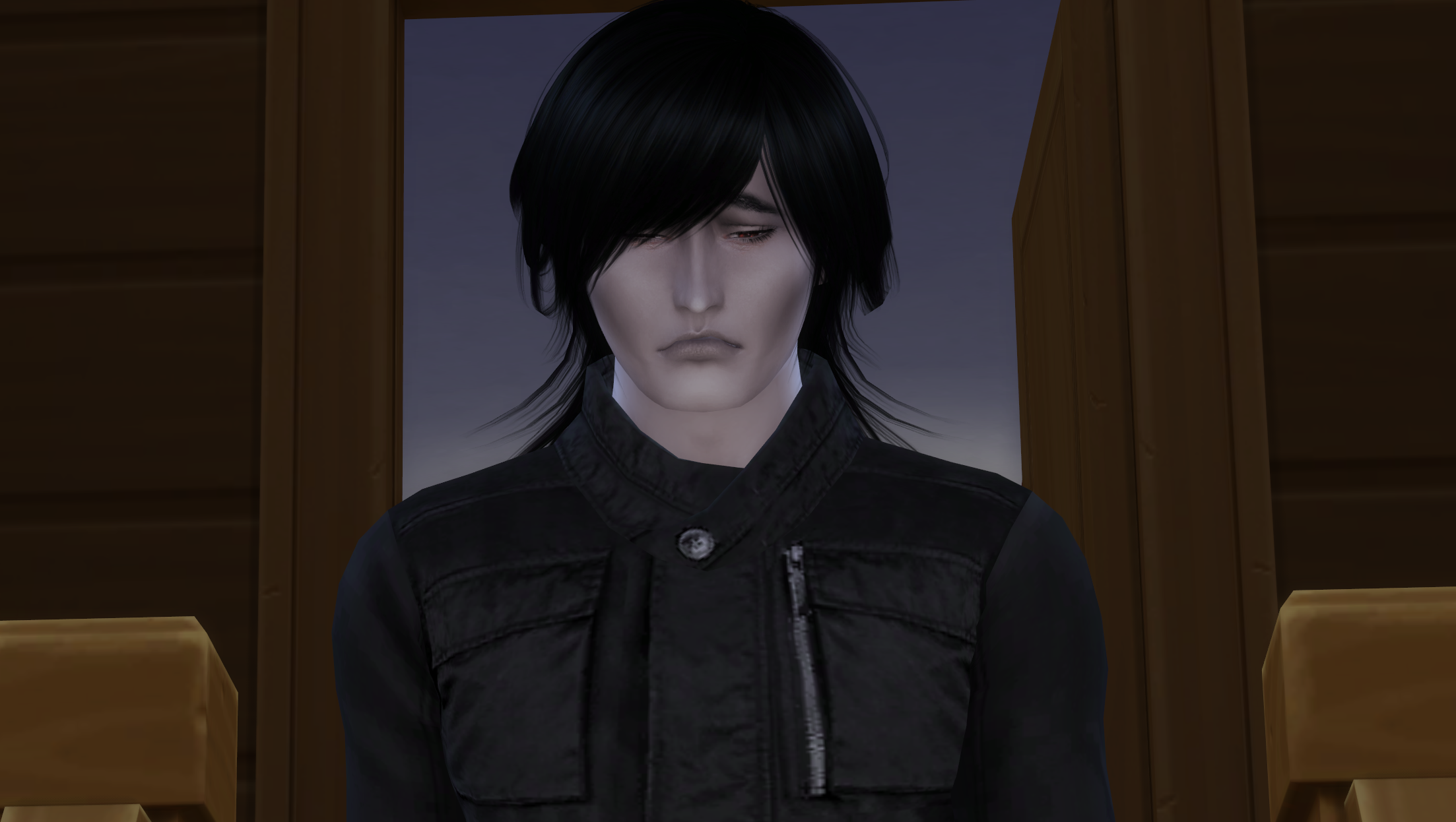 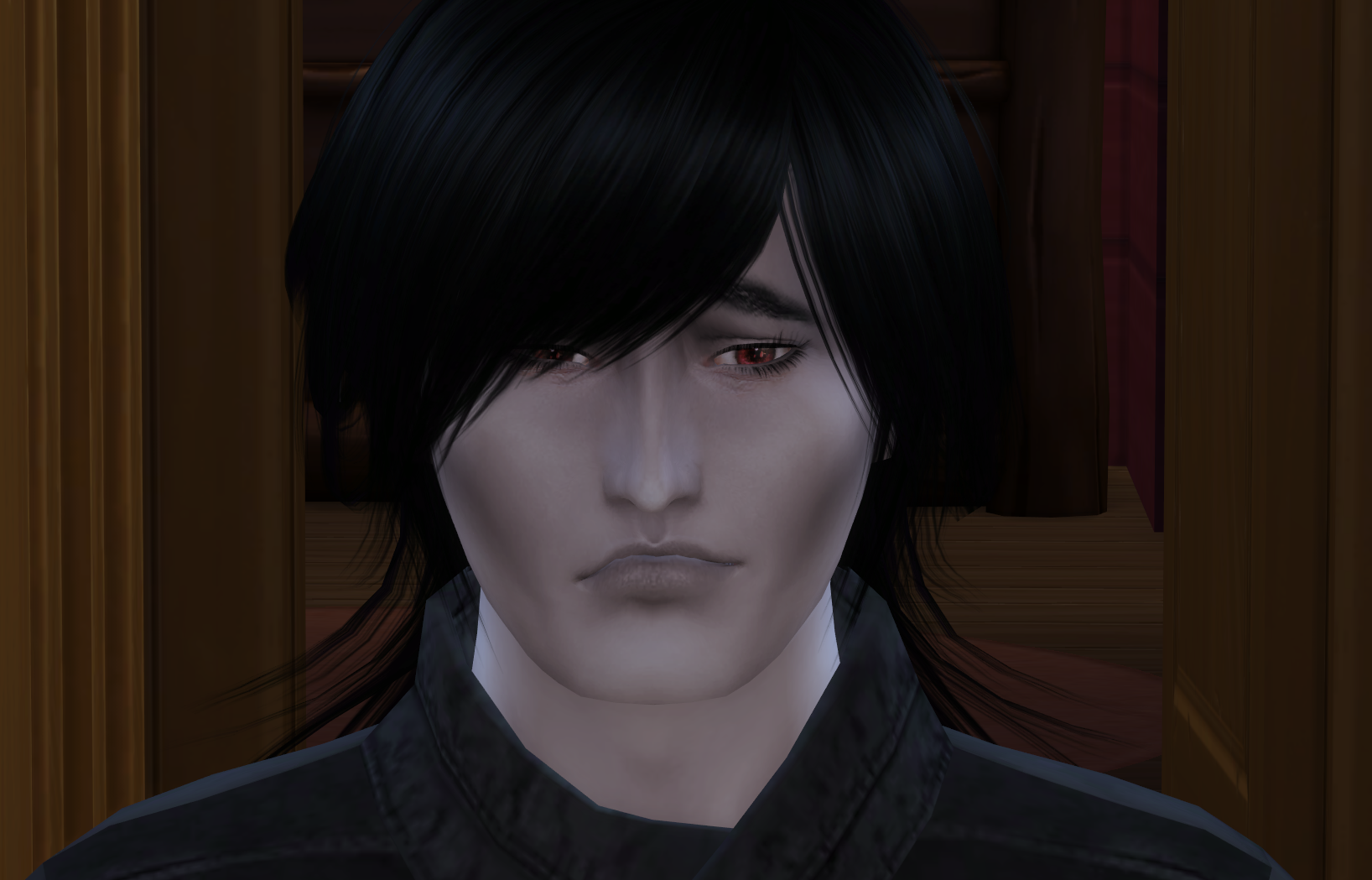 “This has to end!” the words nothing more but a quiet whisper now fading between the rustling of the trees along with a set of eyes glowing in an unnatural red …