Heath paced back down the sandy path to the beach yet again. He had met a beautiful girl by chance, she agreed to meet with him. Just … where?

Idiot! 75% of Brindleton Bay was coast, should have asked where exactly she usually went.
Stupid!
Now he would end of not seeing her after all, she might be at the other side of the Bay.

“I am an IDIOT!” he hissed out aloud now.
“That is a strong statement.” he heard a soft voice, making him smile. She was definitely a vampire, as he had not sensed her presence.
“Hello Catherine.” he smiled nervously at her, which she returned in kind. It was obvious that she had not been on many dates either.

“I left my easel at home. I thought maybe you would like to go for a walk with me, so we can get to know each other better. If you want to, of course.”
“Oh, I want to. Very much so.”
They started walking, slowly.
They talked, and time until the first signs of dawn came on seemed to have flown by.

This would only be the first of several secret nightly meetings. Each time they got more comfortable with each other.

At some point the polite smiles turned into shy meaningful ones followed by gazes just a little too long to be accidental and blushing.

The distance between them sitting next to each other dwindled until their legs touched. And more.

And then one night …

At some point Catherine insisted Heath come to her home and introduce himself to her parents, officially.

Heath walked up to the doorway, Catherine opened at the second knock as if she had been standing by the door, she pulled him inside, a quick kiss when they heard Silas’ voice from the living room.
“Who is at the door, my petal?”
Catherine pulled Heath along with her.
“It’s Heath, daddy. Heath and I wanted to tell you something … we are … dating. He wanted to officially introduce himself to you and …”

Catherine beamed at her father, then at Heath, until Silas shot up from his chair interrupting her.

“I beg your pardon?!” he roared startling Elizabeth.
“Daddy!” Catherine seemed shocked.
“You and … that there?! No. NO! Absolutely no!”

“Silas, darling …” Elizabeth tried to calm him.
“NO! Out of my house. And you, up to your room!” he yelled at Heath, then Catherine.
“Daddy!” she complained again.
“GO UP TO YOUR ROOM!”

“Come on honey, daddy wants to talk to Heath I think … alone …” Elizabeth pulled her daughter along with her up the stairs. She had never been the type for confrontation.
“Get out of my house and never come back here. And do not dare to see, talk to or anything else with my daughter. I wish no further engagements between you and her. Am I clear?”
“Sir, but why? I have …” Heath started.

“I do not care what you have or haven’t. The answer is no, now leave before I forget myself!”
Silas already opened the door and shoved Heath outside, slamming the door shut behind him.
Heath could do no more than stare at the other side of the door as the slamming of it still echoed in the night like another warning.

Heath sat on his couch, staring up at a large picture of him and Evey smiling back at him.
“I have no idea what I had to smile about then.” he said to the picture.
His mood had been at the lowest low of late.
He hardly ever saw Everleigh these days and if, usually with that ape KC at her arm visiting her grandparents in the main house.
Now he finally he found a girl he was really interested in, and her father locks her up and kicks him out.
Was he really so terrible to warrant that?

Catherine seemed to really like him. She smiled so sweetly and never had any of the usual hesitations and reservations.
Never had she looked at him like some failed laboratory experiment like most people did initially.
She and he had dreamed about the future, normal things to most, but always so far out of reach to him. Now for once they seemed within his grasp, but alas, enter Silas.

From others he knew that Catherine was under lock-up at Silas’ home, who had taken her phone and computer and any way to communicate with him. Liam had also tried to talk sense into him, alas with no luck. Since nobody could force Silas to allow it, once more Heath would remain alone.

A knock on the door above startled him briefly. Nobody ever knocked, as the only one who ever really came here was Evey.

“Yes?” Heath inquired.
“Can I come down?” A male voice asked.
“Yes…” Heath did not recognize the voice.
Into view came a young man about his age, who looked familiar.

“You probably do not remember me, I am Henry Blackbourne, Catherine’s twin brother. We met a few times at our house.”
“Oh yeah, right. Hi. Is she okay?”
“She is fine, all things considered. I guess you heard that dad won’t let her see you?”
“Yes.”

“She begged me to get this to you.” Henry handed Heath a sealed envelope.
“What is it?”

“Not a postal worker but looks like a letter to me.”
“Ah, yeah.”
“Look, I know my dad can be very strict and he is very protective of his daughter. Cath and I are close and she is miserable so I decided to help. If my dad finds out about this, I’ll be tarred and feathered just like you and Cath.”
“Thank you. Can you wait for me to read it, so I can give you a reply?”
“Yeah, sure. Since I have nothing better to do with my life.”
“Sorry .. and thanks. I’ll be quick.”
Heath tore open the letter, hoping that it would not be a goodbye, instead he read sad explanations of her situation, that she missed him, wished she could see him, how sorry she was about everything. It was signed with a little heart next to her name, which gave Heath new hope.

Heath found some paper and wrote his reply, encouraging words, caring, telling her to not give up, there would have to be a way. He sealed the envelope and handed it to Henry.
“You know, you should get a TV down here. See you around Heath.”
“Yeah, thanks again!”

A knock on his coffin. He moaned. Heath had been in there for three days without feeding or interacting with anyone. Most likely it would be Liam or Leonie checking up on him.
And he was not in the mood.
Another knock.
Ignore it.

The coffin was now opened from the outside and before he could protest he looked into beautiful purple eyes.

“Catherine!” He exclaimed jumping out of his resting spot.
Hopefully I do not stink!, Heath thought, now deeply regretting his decision to live like a hermit for days as they embraced.

“Heath, I had to see you. I ran away from home. Can I hide here? Please! Is it safe? I do not want to go back home. My father is unreasonable. Please!”

“Umm … here? I don’t know, the Camerons would get into trouble if they looked for you here and I am pretty sure they will. Catherine, I have an idea, hold on to me, tight.”

He closed his eyes as they became transparent and then vanished. 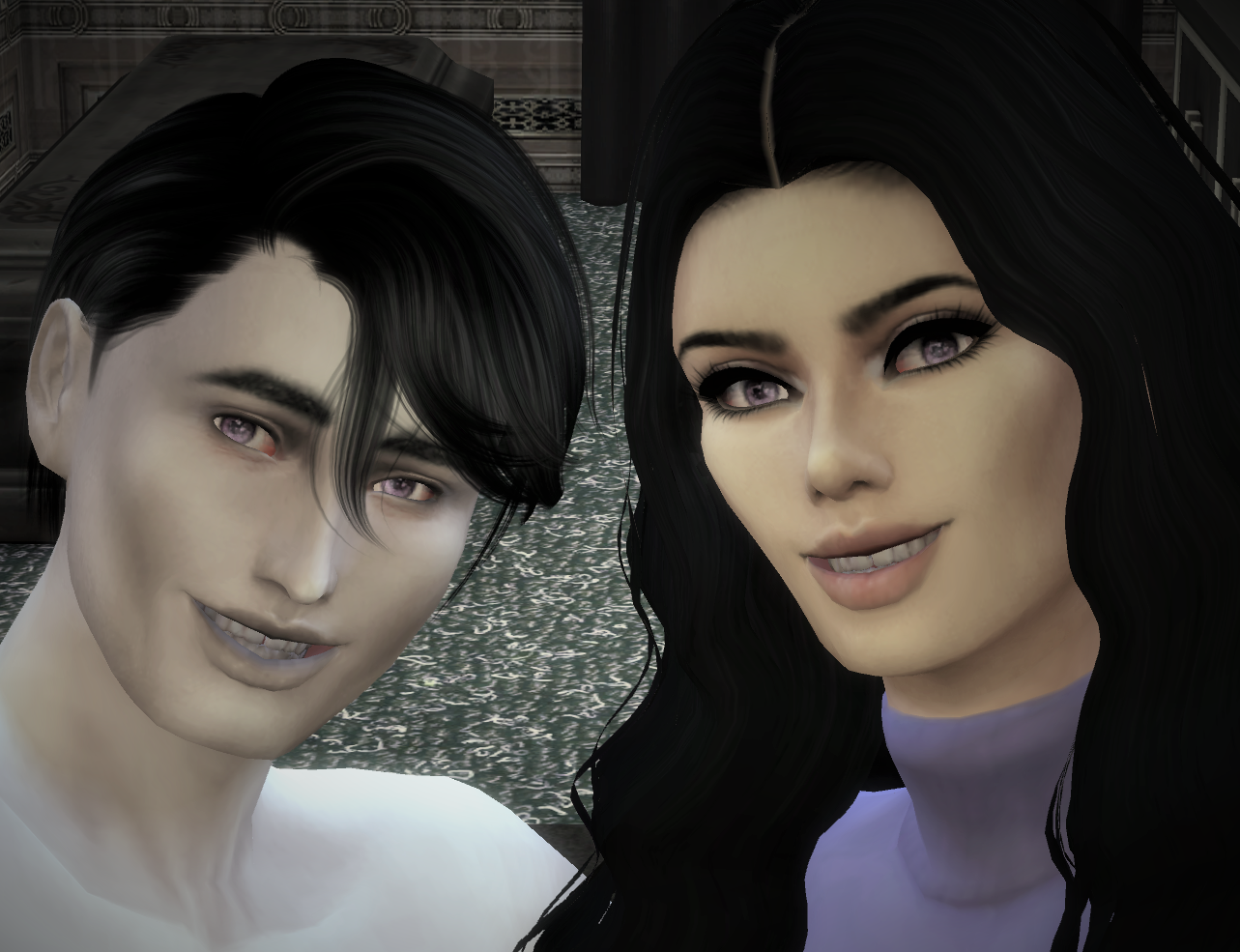