Heath awkwardly pet Catherine’s back, as she sat next to him, hunched over, crying relentlessly like she had for hours now with only brief breaks. They had been gone for three days now, and she had only gotten worse.

He deeply regretted letting her talk him into running away with her, as undoubtedly by now everyone had figured out they were gone together. And all that not too long after his faux pas with Everleigh. The Camerons had forgiven him for that, but they would not forgive him for this.
Silas had probably raised hell at their home, scared Leonie and all because of him.
Why could he not finally figure out how to do the right thing?
Why did life have to be so complicated and complex?
If only Evey were here.
She would know what to do.

“Heath, I want to go out. I need air. This is making me claustrophobic. Can we go out, please?” she looked up with swollen, reddened eyes from all the crying.
“Of course.” he agreed, against better knowledge. It was too risky. But if he said no, she would cry again. He could not bear it. It was dark. Maybe nobody was out and nobody would see them.
Hopefully.

He lead her up the steps and onto the grass where she broke away from him and immediately began running down the dirt path. 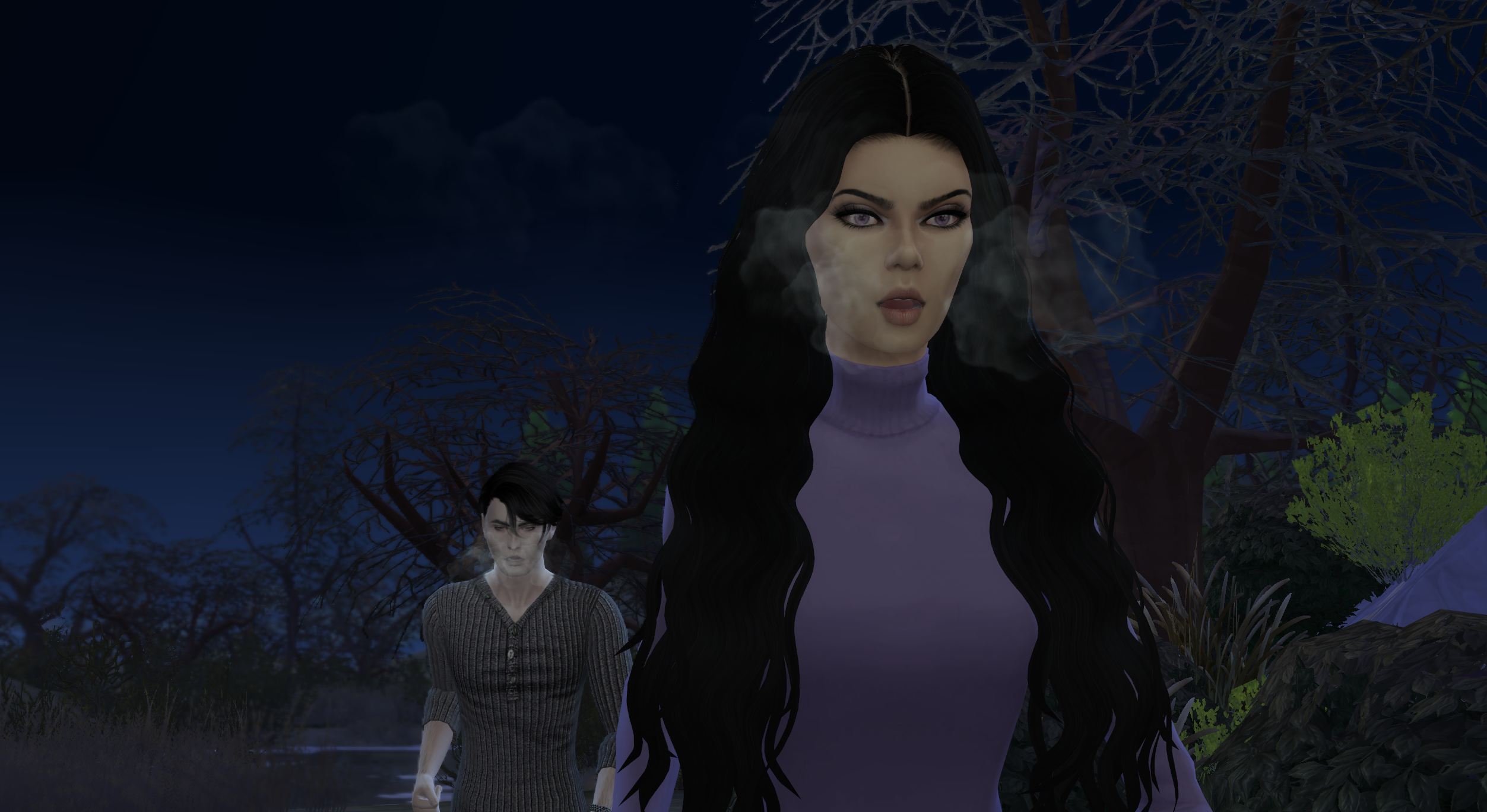 “Catherine, no! Wait! Please!” he yelled running after her. 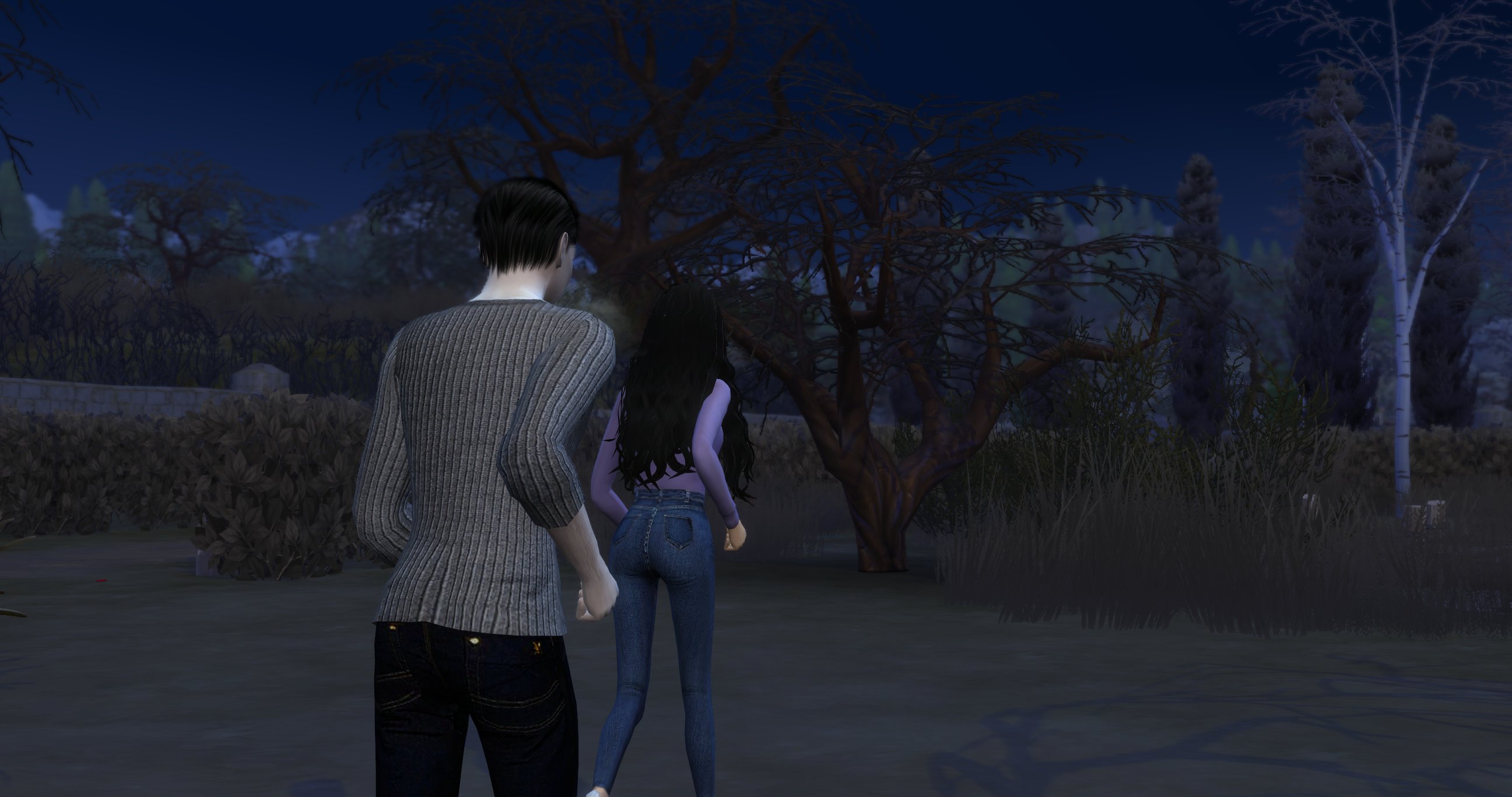 When he finally caught up with her they were near civilization.

“Not here, too risky. They will find us.” he tried to gently drag her back to the hideout, but she dug in her heels and shook off his hand.
“Is this Windenburg? I have rarely ever been. I want to go to the promenade, I heard it’s beautiful there. Please Heath …. pleeeeeeease.” she begged him.
“There are too many people – including vampires – there, with all the bars, clubs and such around …. no Catherine.”
“Even better, nobody will mind us. I am going!” she turned and walked off, while Heath stood around uncomfortably.
“Wait up, Catherine. I cannot let you go alone. It’s not safe.” he ran after her, then walked next to her.

They had been walking around by the water, holding hands, Catherine seemed in much better spirits and Heath relaxed when she even smiled up at him now. 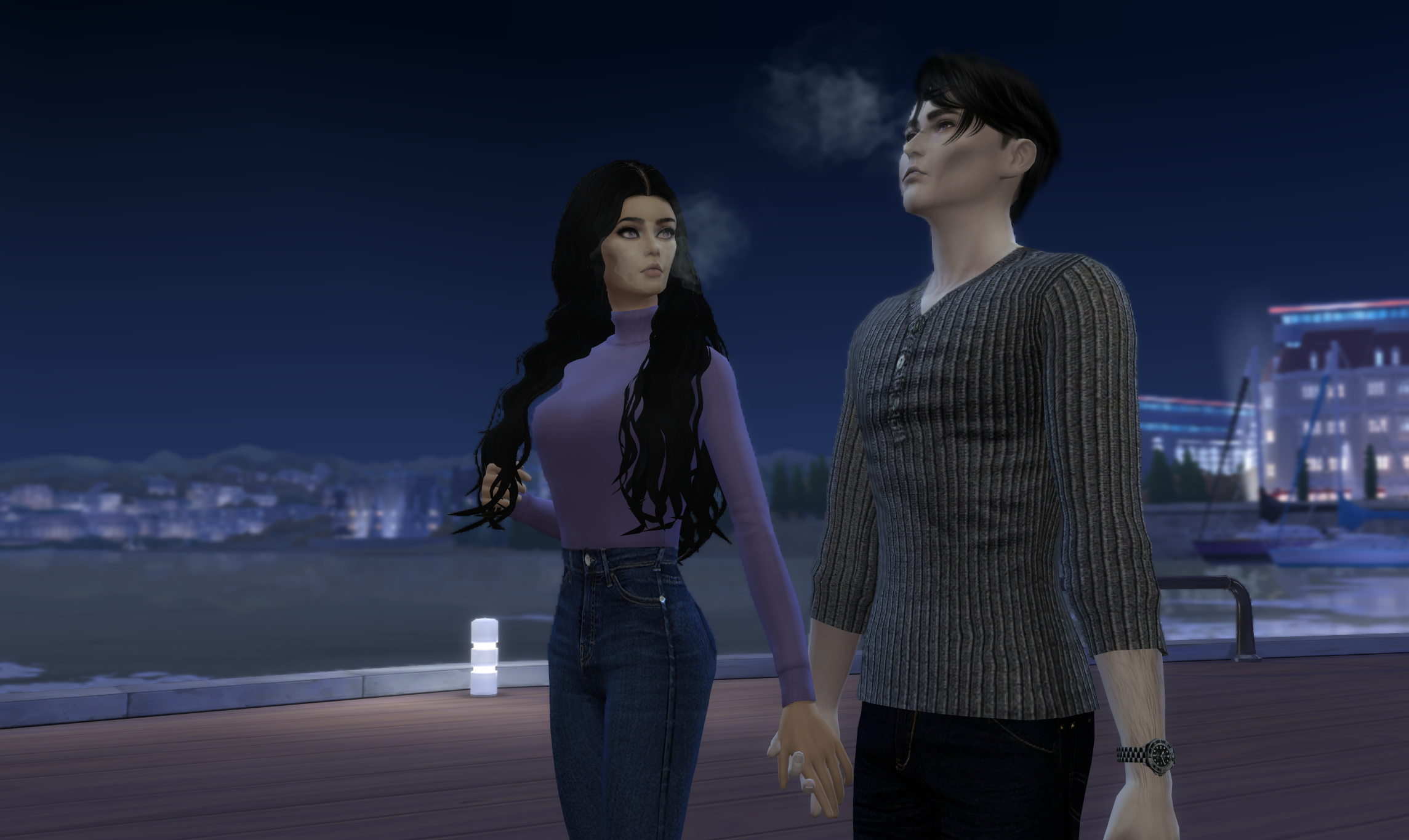 She seemed to enjoy the walk, looking around the scenic views with obvious amazement. 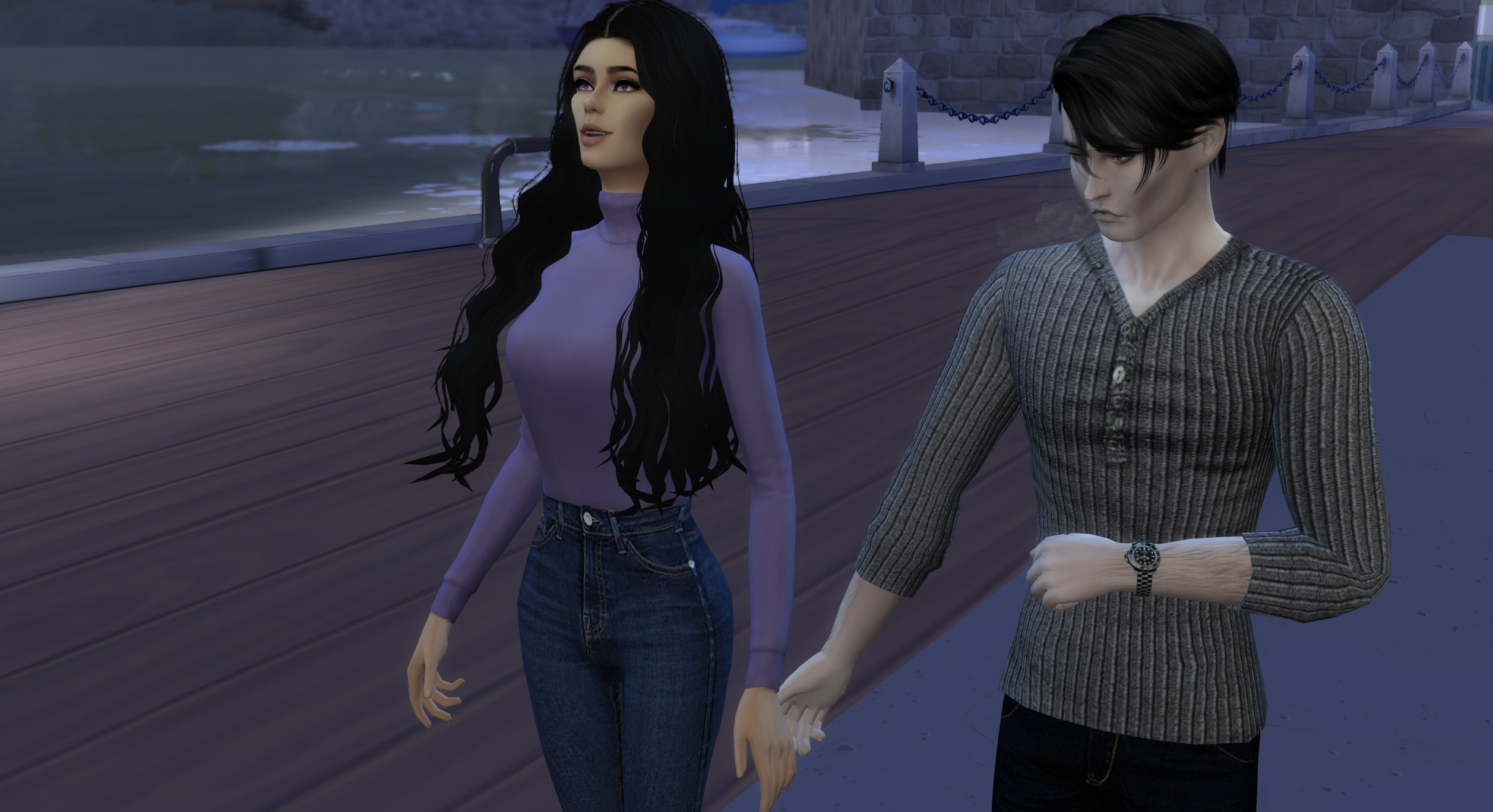 Instead of crying, she was now chatting happily about the things they passed, how she liked them.

But then suddenly she seemed to have seen something, inhaled sharply, stiffened, pulled her hand away from his and started beating around on his arms and chest, screaming. 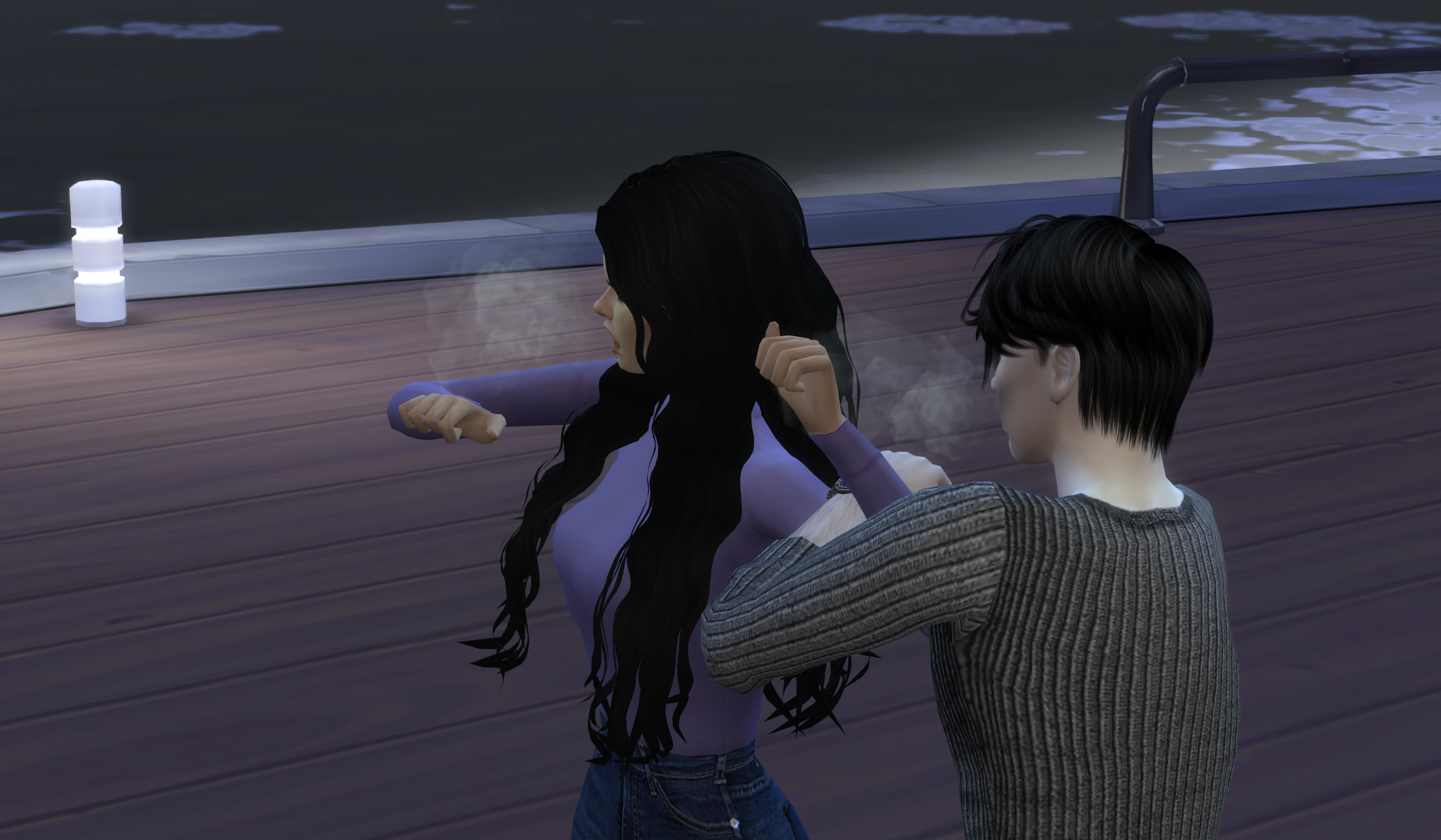 Heath froze in his tracks, then tried to contain her when he saw two young men arrive, pulling him away from her by force.

Still in utter disbelief and shock he never saw the other move, but felt the hard impact of the punch sending him to the ground where he received more beating. 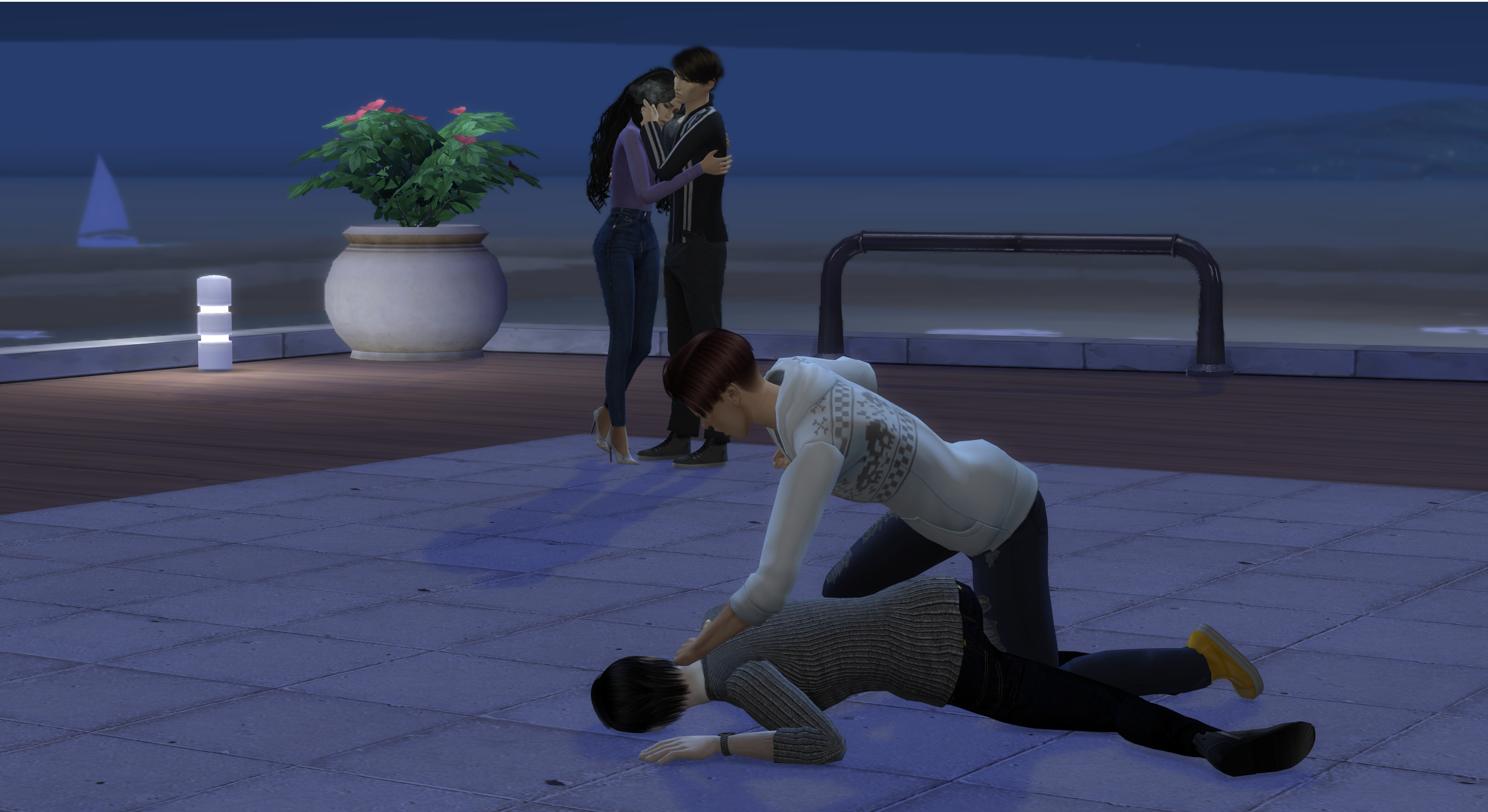 Eventually he was pulled up and held onto.

He saw Catherine cry into the shoulder of one of them with great familiarity. Heath realized it was her brother Henry, the guy holding on to him probably would be Charles, her older brother, so he refrained from using his powers on either of them.
She knew them, cared about them, best not to risk injuring them.

The next occurrences were a blur, but he ended up beaten and alone, after listening to endless and dangerous threats for his immortal life by other immortals. And Catherine only stood by, crying while thanking them for ‘saving’ her from his ‘abduction’, that she wanted to go back home to daddy.
Sold out.
Coldly.

When he finally made it home he ran into Evey leaving. Naturally she stayed with him, he cried on her shoulder until both fell asleep on his couch.

Everleigh steered her car into the street where she lived when she could already see the white Jeep and its owner standing in front of her home.
Uh oh!
“KC! What are you doing here?” she said, exiting her car.

“Visiting you. Guess what, you are not home. Pretty early to be out and about.”
“Yeah .. I … uh … needed to run to the convenience store for something.” Everleigh stuttered. 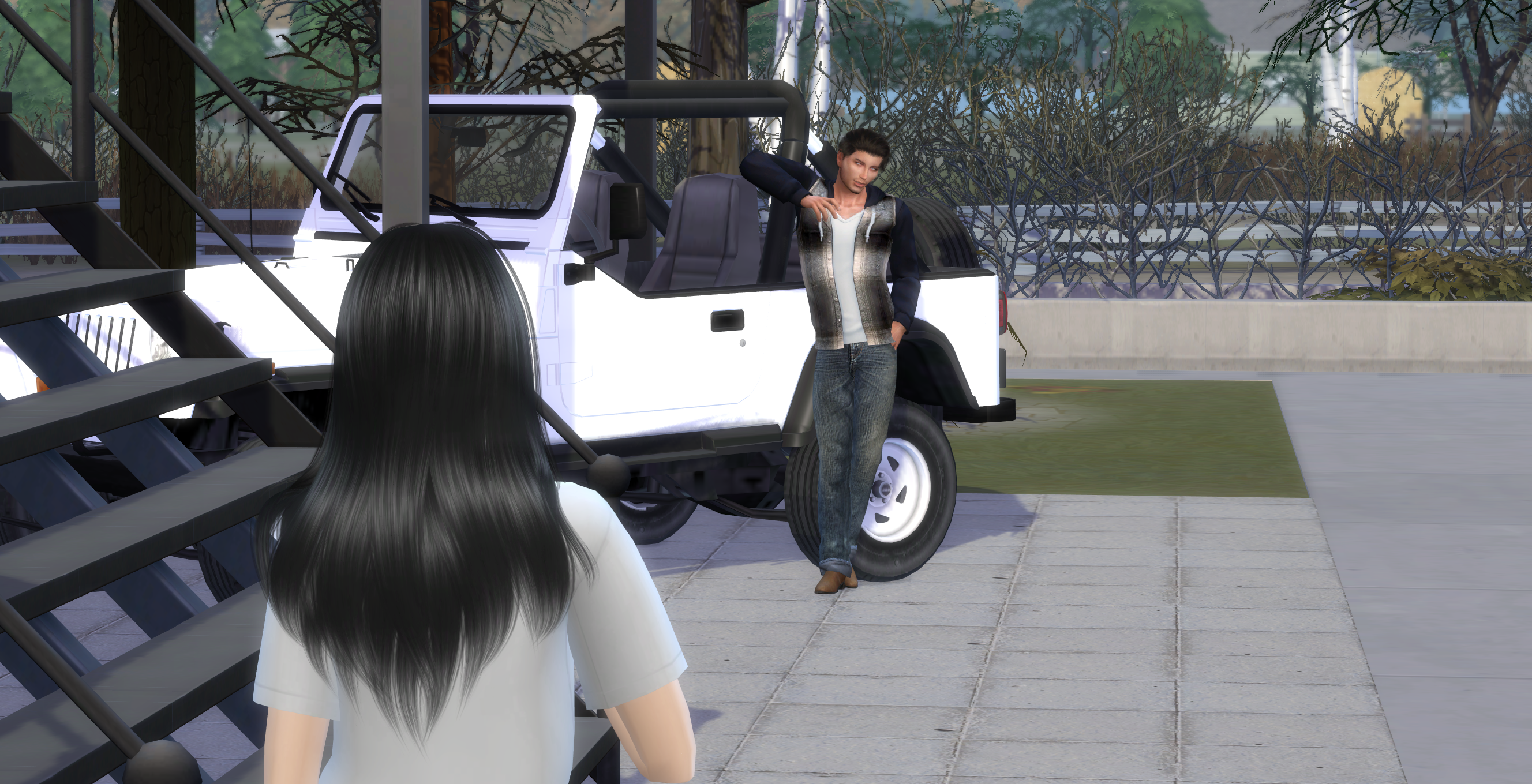 “I know exactly where you have been. I drove by and saw your car in the driveway at your grandparents’ place last night. Guess I should tell you that my mood is pretty rancid as I have been right here all night, waiting for you to come home. Which you didn’t until, let’s see, ah almost 5 AM. Just wanted to see if you would tell me the truth. Evidently not. On that note, I am out of here.” he turned around. 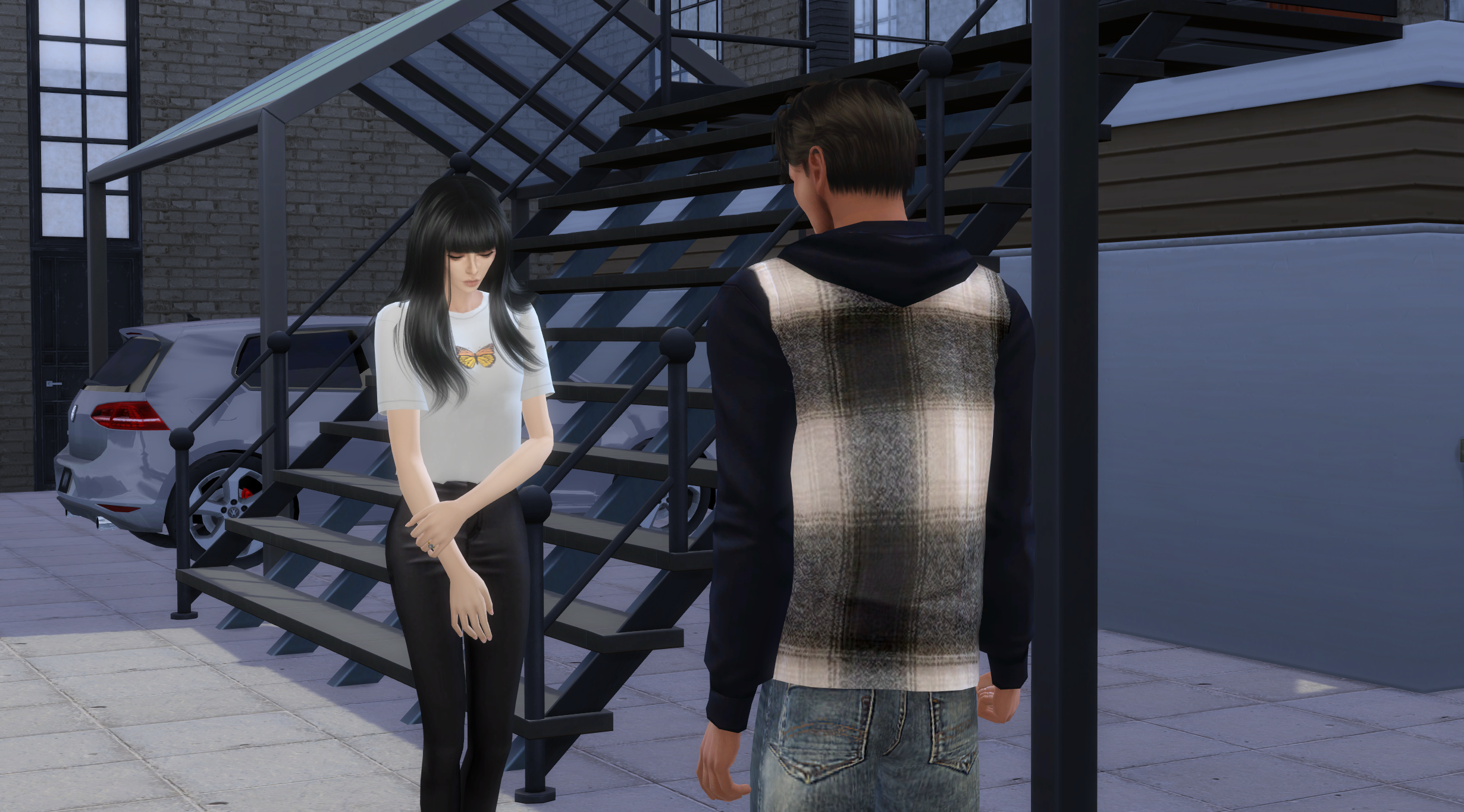 “KC, wait!” Everleigh said and he halted, then told her
“I am not in the mood for waiting. I have been doing a lot of that over the past years.”
“KC, this is not what you think. I just talked with Heath, he’s hit another rough patch, and then I fell asleep on his couch. Totally harmless.”
“Harmless? You know what was also harmless? Your cousin – an attested bratty bitch – kissing me unsolicited. Would you like a refresher how well THAT went for ME?!” KC was very upset.

“Oh my gawd, KC, how many more times do I have to apologize for that. Fine, again, I was a bitch about that and you were totally innocent. Feel better?”
“Not really. You know, I was not gonna say anything about it, maybe for my own sake to feel like I still have something resembling balls and a backbone, but your reaction to my proposal was pretty fucked up too. Well, now that your Mr. Special is back and available again, have a nice life with him.”
He turned and climbed into the driver seat, turned the key in the ignition and started backing up. 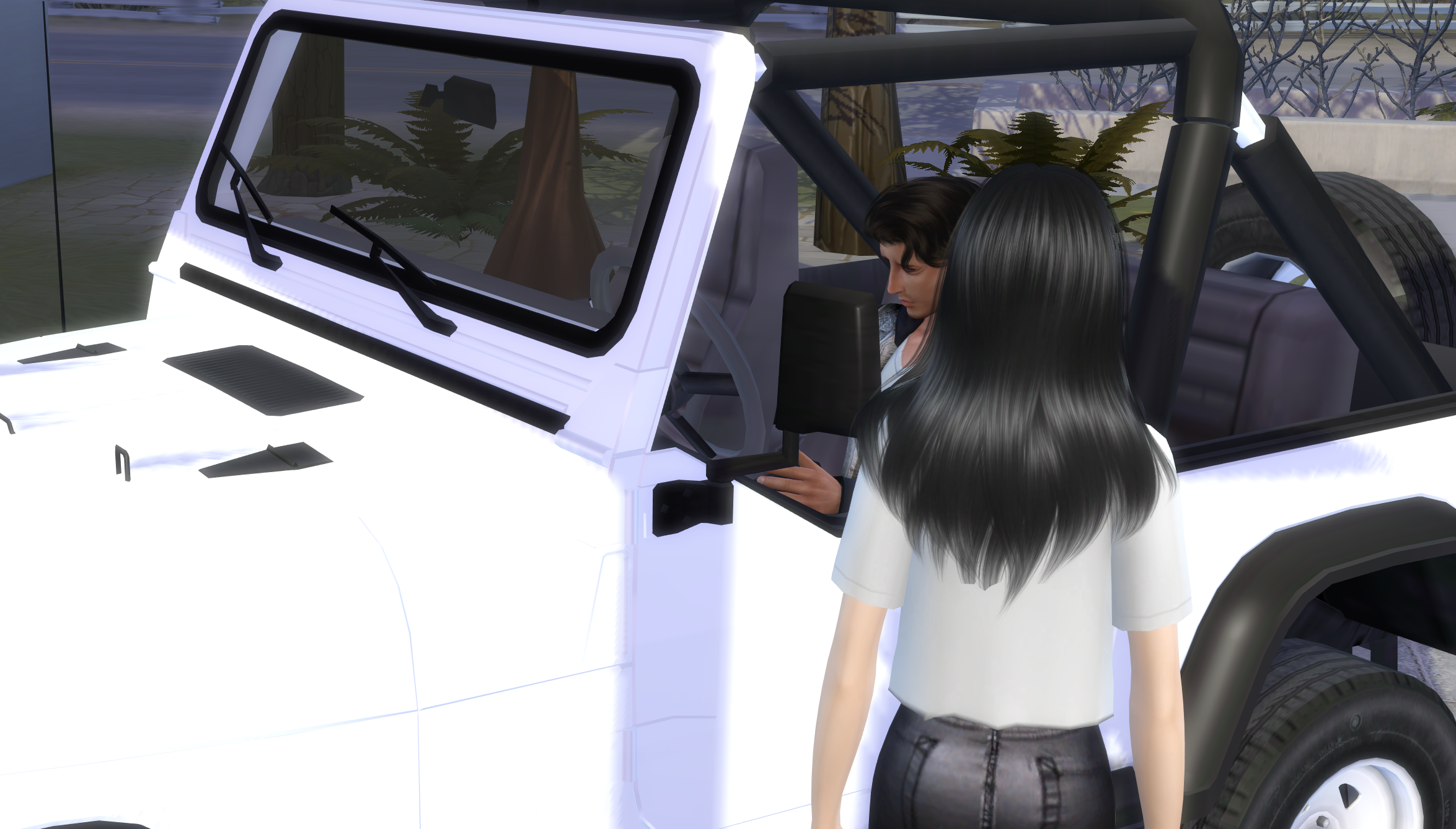 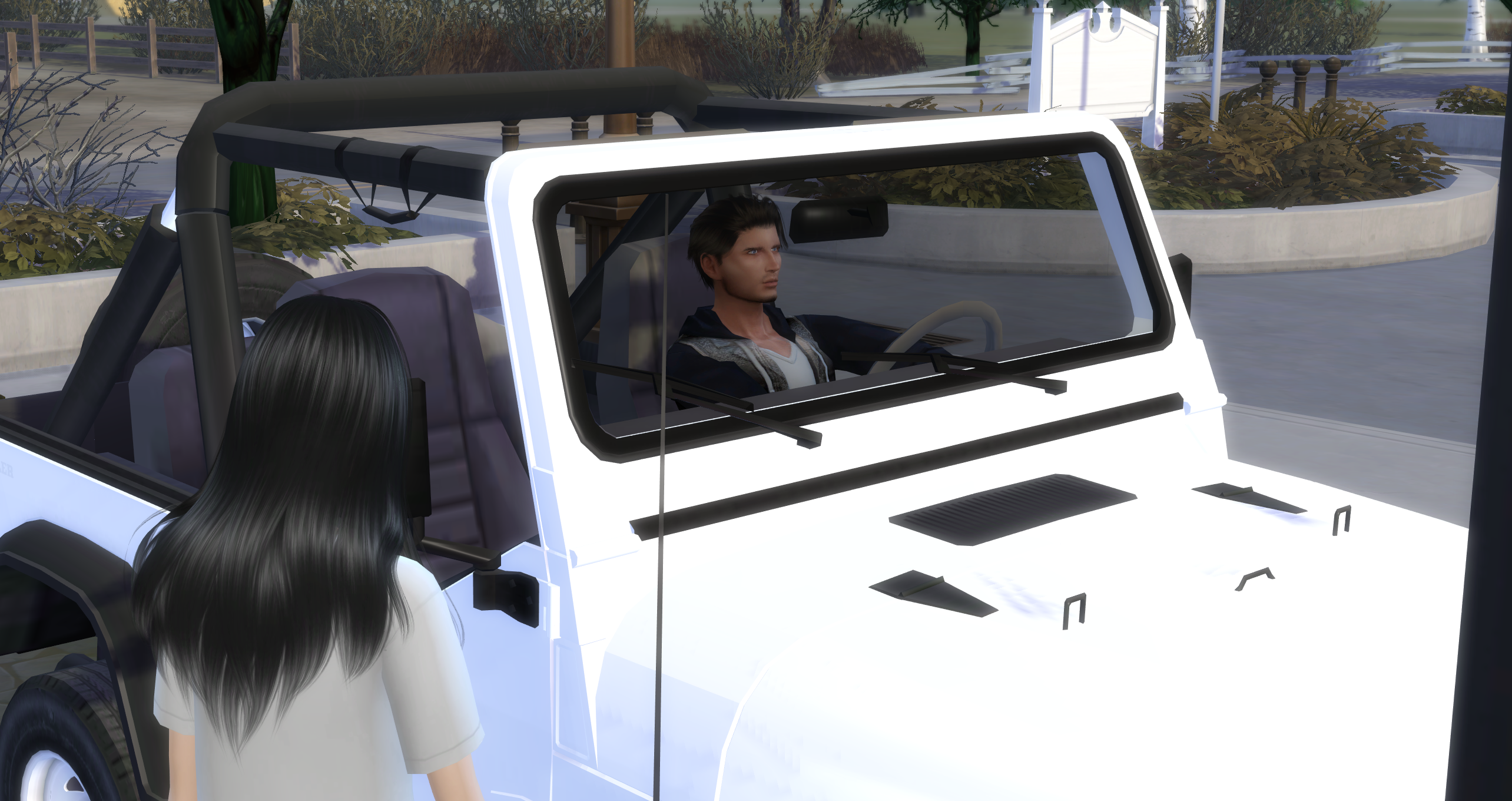 “KC, are you breaking up with me? Don’t you love me at all anymore?” 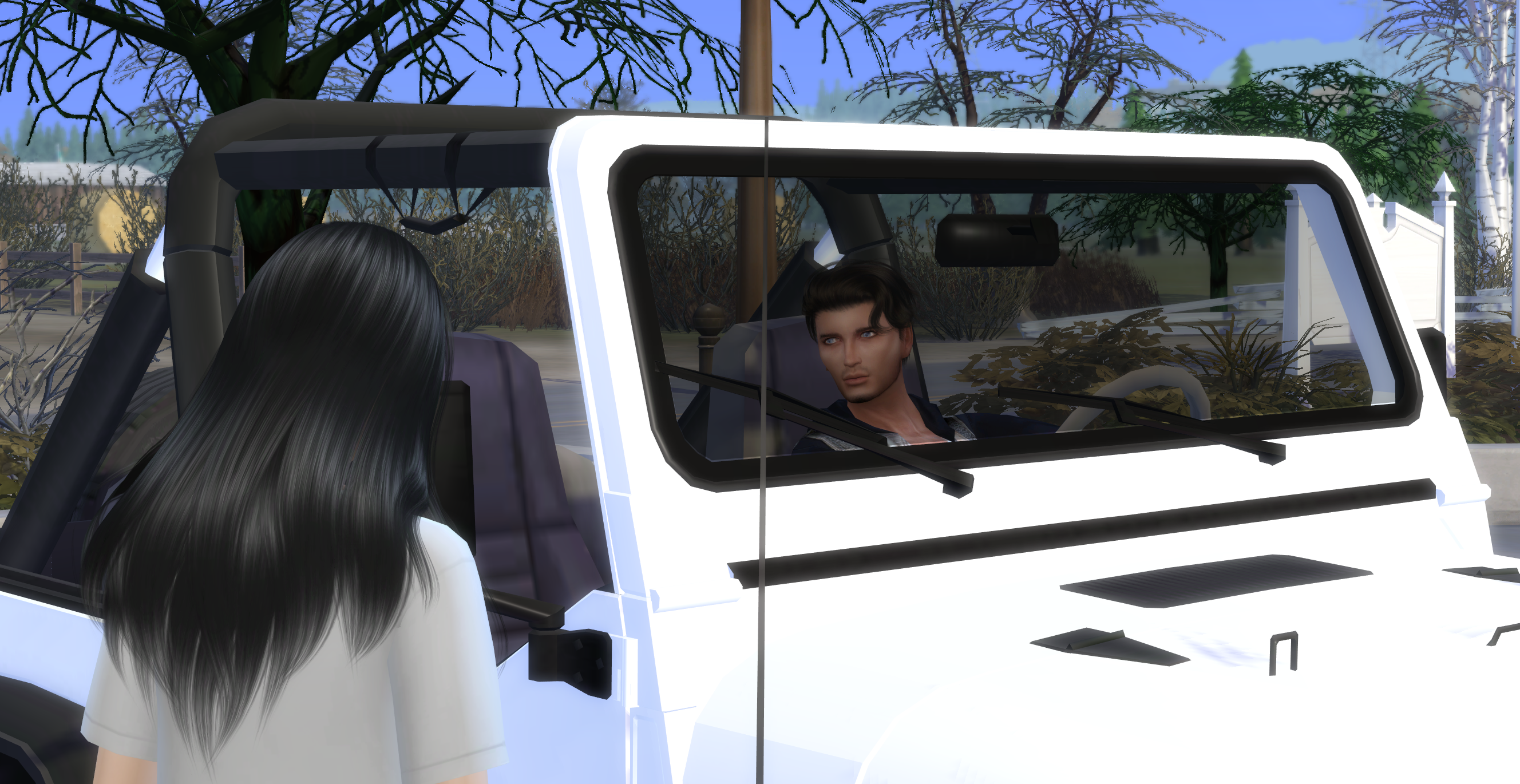 “It is BECAUSE I love you that I am walking away from this, before I start turning bitter and hateful towards you and while I still have an ounce of self-respect left. Show me one man in his right mind who would not mind his fiance sleeping over at another man’s, who has never made it a secret that he wants her.” he growled as he drove off without another look.
Everleigh had not even noticed that tears were running down her face.
What to do now?
Drive after him and try to get him to understand? He seemed so very upset, doubtful he would be receptive to anything she would say.

If she did nothing, it would look like she agreed with him.