Summer Break
It’s the twin’s 16th birthday party.
“Want some cake?” Ethan offered.
“Aren’t you gonna wait to blow out the candles and shit until we all finished howling ‘happy birthday’ at you guys?” Forrest smirked.
“You know my parents. There is pre-cake cake.”

“HAHAHA! Where is your sister?”
“She’s not here. Ez is at our grandparents’ house.”
“Oh, when is she coming over. I thought this started like an hour ago and I was running late.”
“She’s not. Just me.” Ethan told him plainly.
“Ezzy is missing her own birthday party?!” Forrest couldn’t believe his ears.
“Yeah. We all tried, she wanted no piece of it. Grandparents aren’t much for parties like this, we had the big family dinner over there last night. She just stayed and decided she won’t come to the party. She didn’t invite anyone who wasn’t coming anyway, so .. we had no argument against it.” Ethan sounded upset.

“I always thought 16 was like some special thing for girls.” Forrest still had a hard time believing it.
“I did too. First birthday ever we are not celebrating together. Totally weird. I don’t know what to say. Before and during the vacation everything seemed okay, she was almost her old self again. She seemed happy and chatty, just like the old Ezzy again. But then suddenly she just crashed. Worse than ever I think. Mom and dad are giving her a month, then they are taking her to the doctor again.”
“Dayum! Sorry to hear that dude.”

Ethan went to greet some more newly arriving guests, while Forrest stood there trying to process the news and his disappointment. 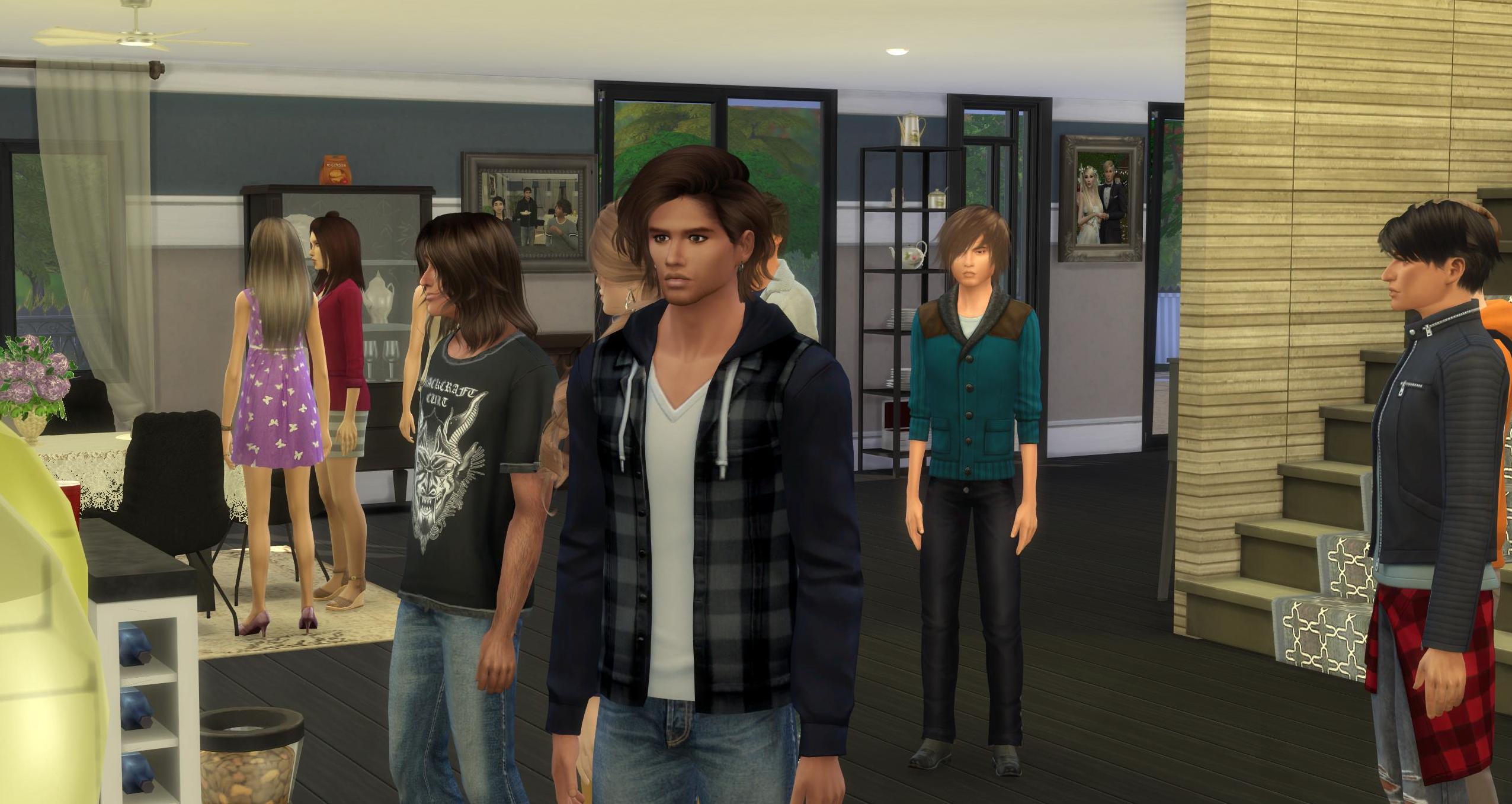 It had been almost two weeks since he had last seen Esmée. And it didn’t make him feel good at all. He looked at the bag with the gifts he brought, went over and took the smaller one out, after making sure nobody paid attention he ran upstairs, slipped into Ezzy’s room. 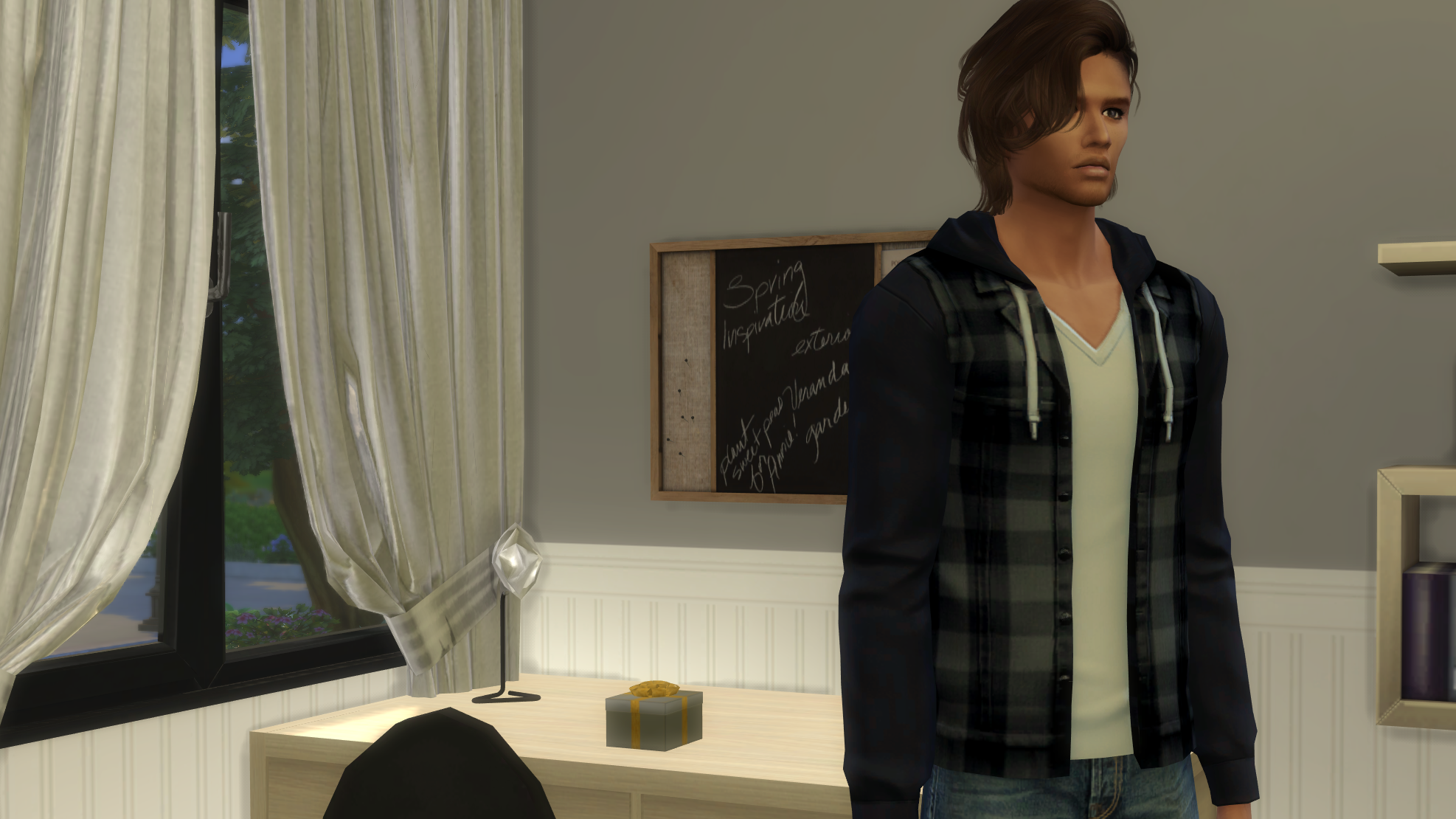 He placed the small box on her desk when he realized the picture of the three of them was gone. 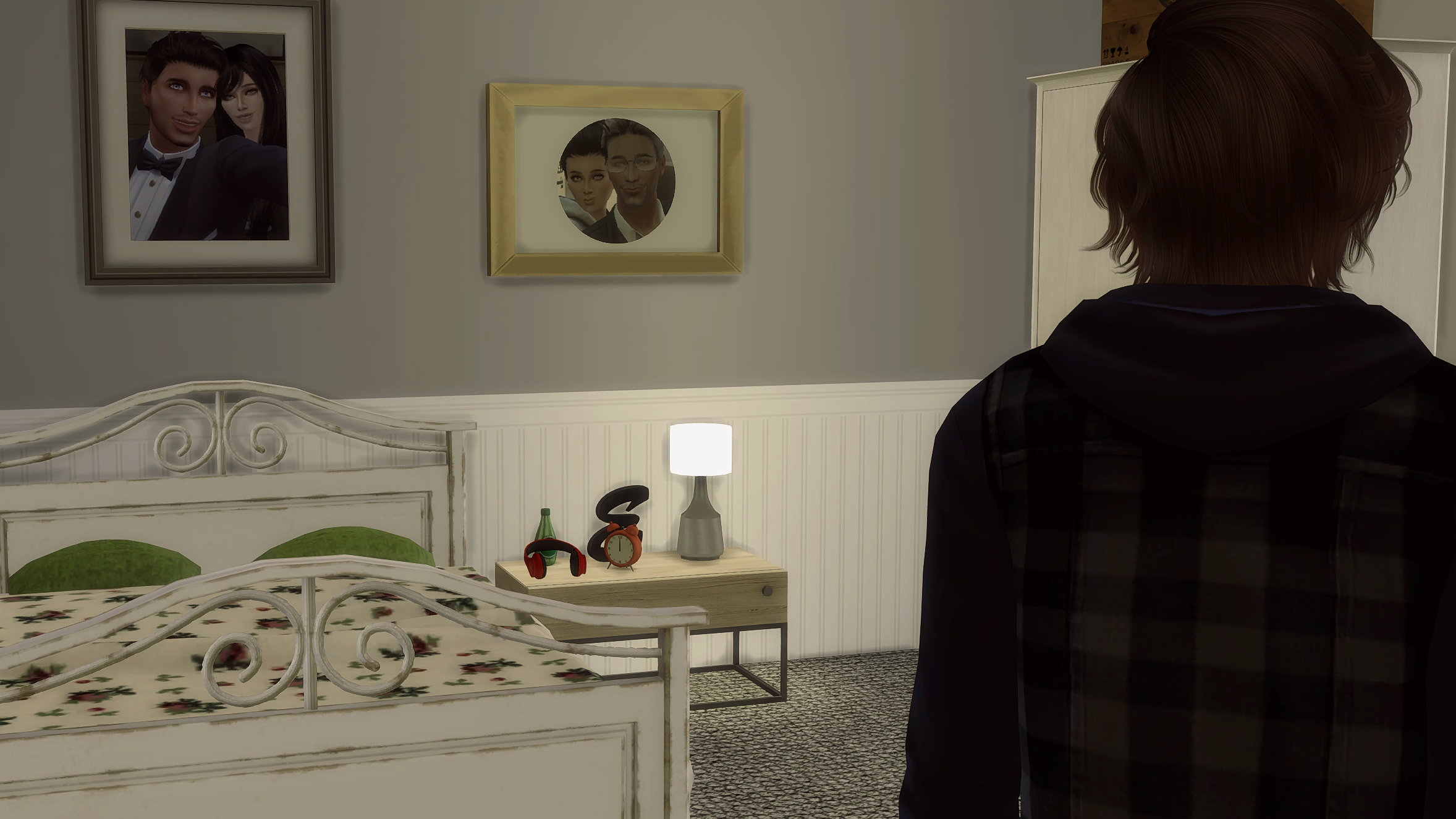 “Shit!” he muttered, uncomfortably shuffling his feet, unsure what to do, but feeling like he had to do something. Just what? 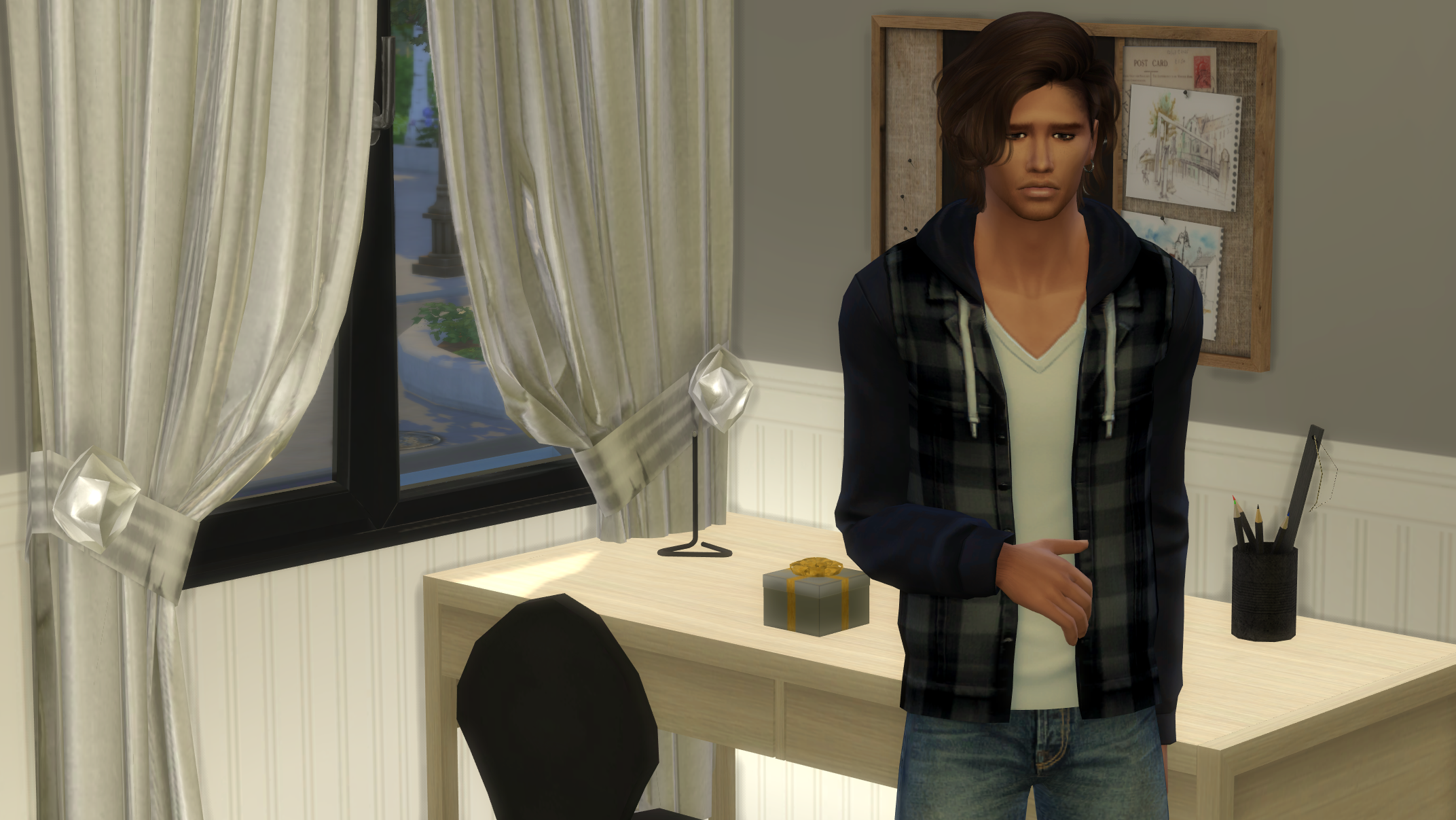 He let out a deep sigh then slipped out of her room again, one last look at the painful bald spot on the wall where that picture had once hung. 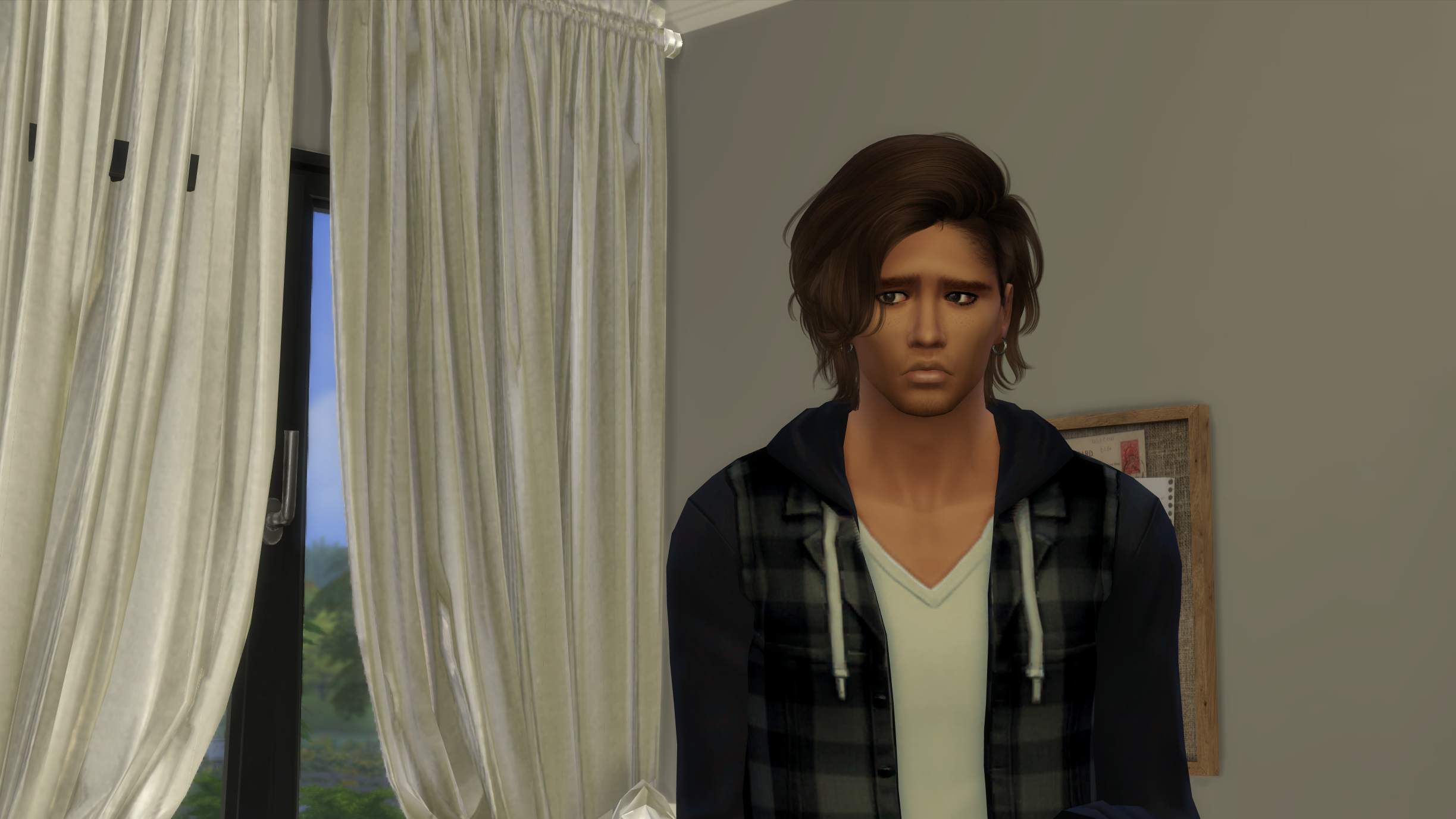 Somehow he felt rejected, cut out. And he didn’t like it.

There was music, the cake, dancing, games, laughter. In the midst of it Forrest went outside onto the Camerons’ patio. He needed air – and some quiet.

He still felt disappointed even though Ethan loved his present, a new video game, and there was a lot of laughter. 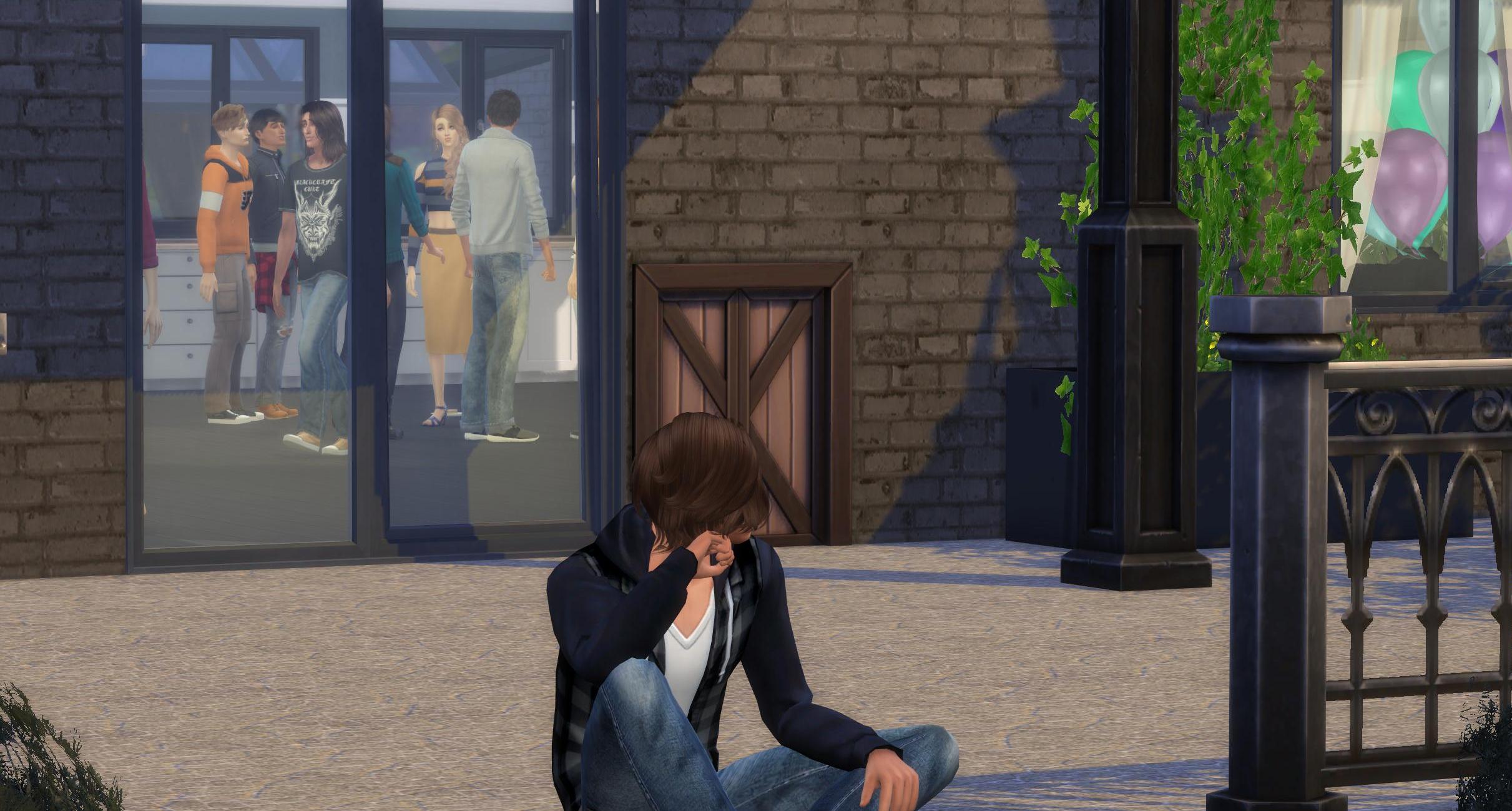 Looking back inside he noticed the many family pictures – and particularly Esmée, smiling, looking happy, he thought about how crappy it had to be to spend your birthday alone, so he went back inside, ran up to her room, grabbed the little box he had placed on her desk earlier and left.

“Ezzy, there is someone here for you.” Katie told her. 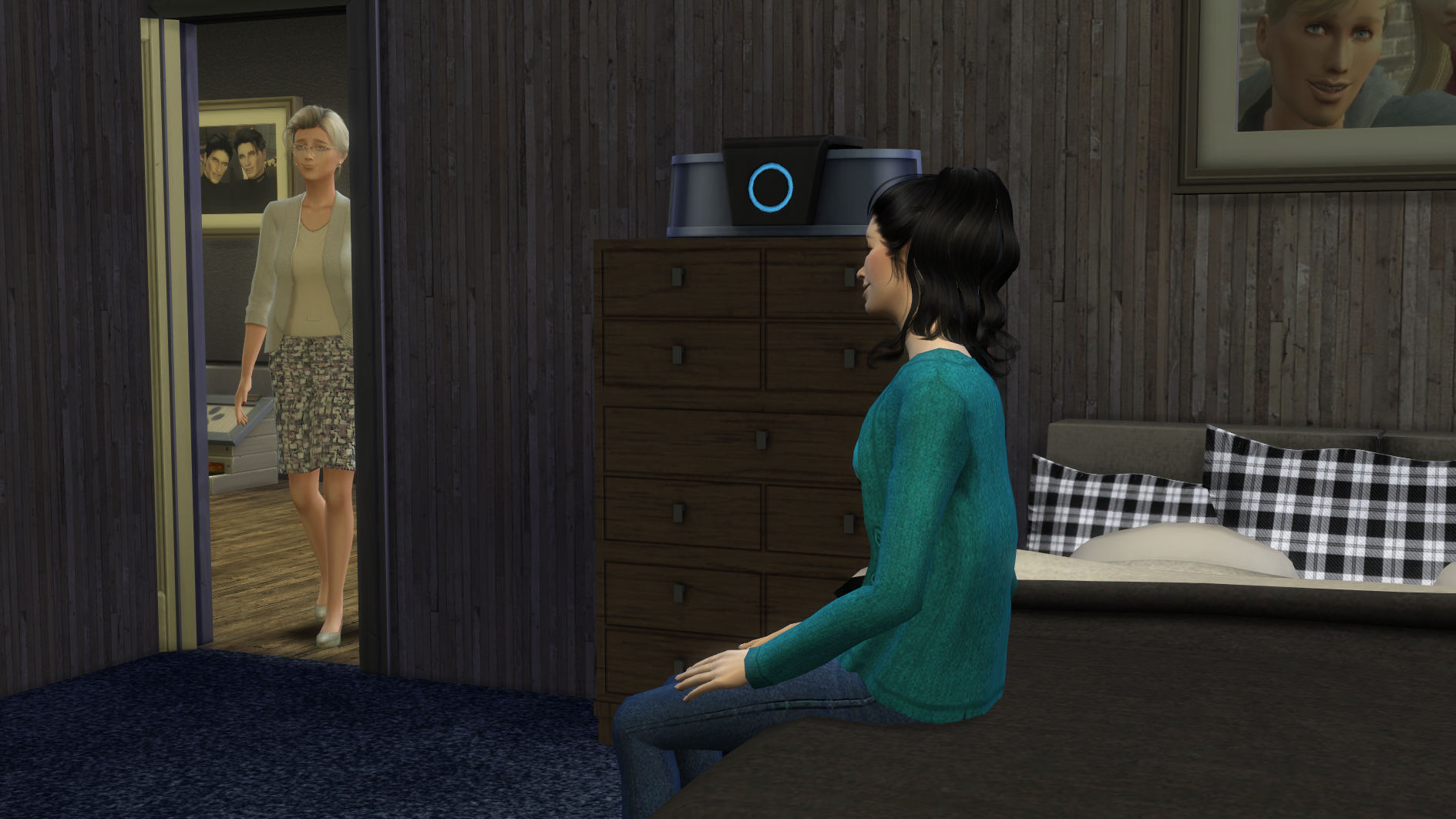 “For me? Who?” Ezzy had no more friends left. She had broken it off with every single one of them.
“Ethan’s friend. Freddy I think.” 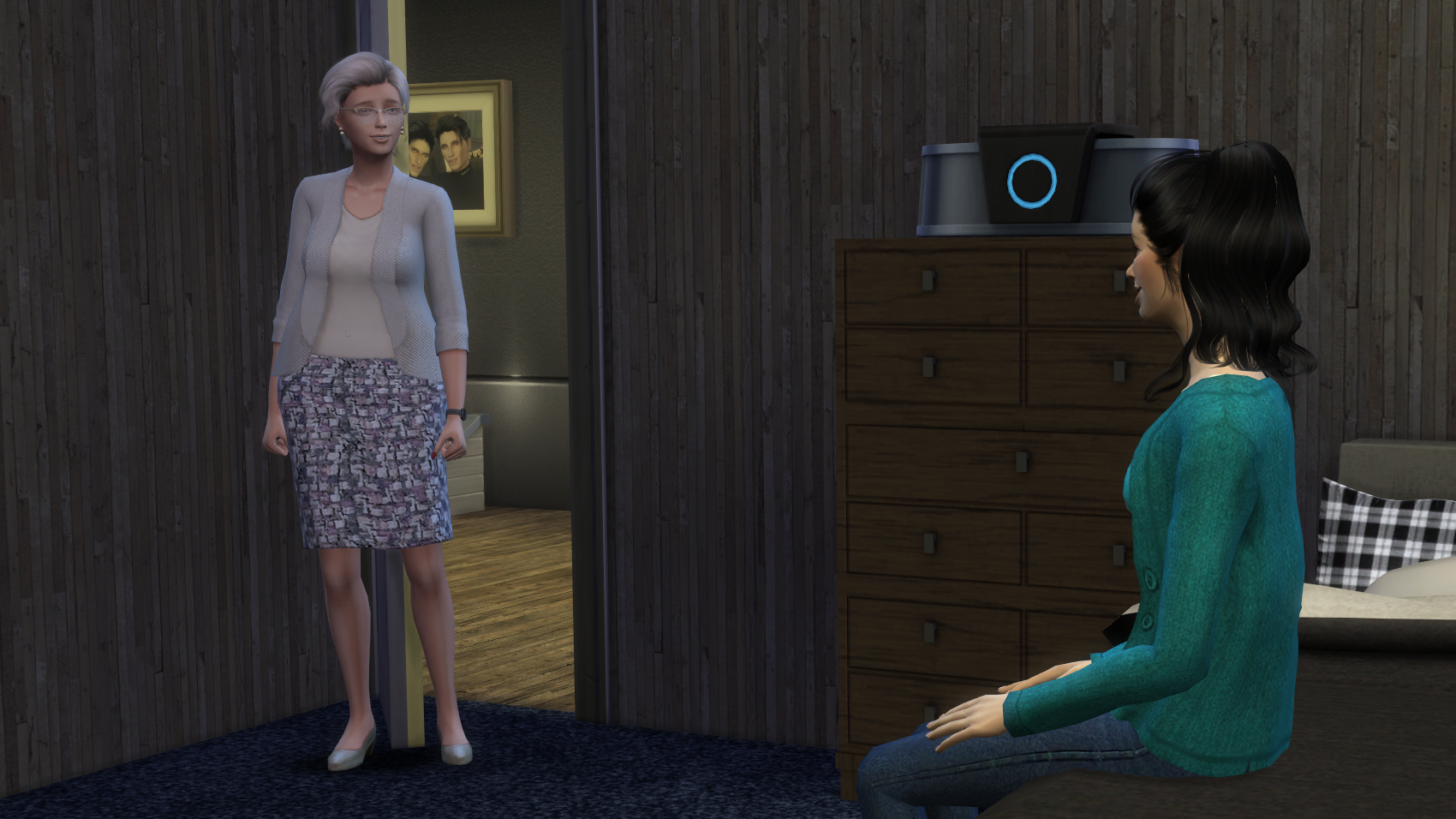 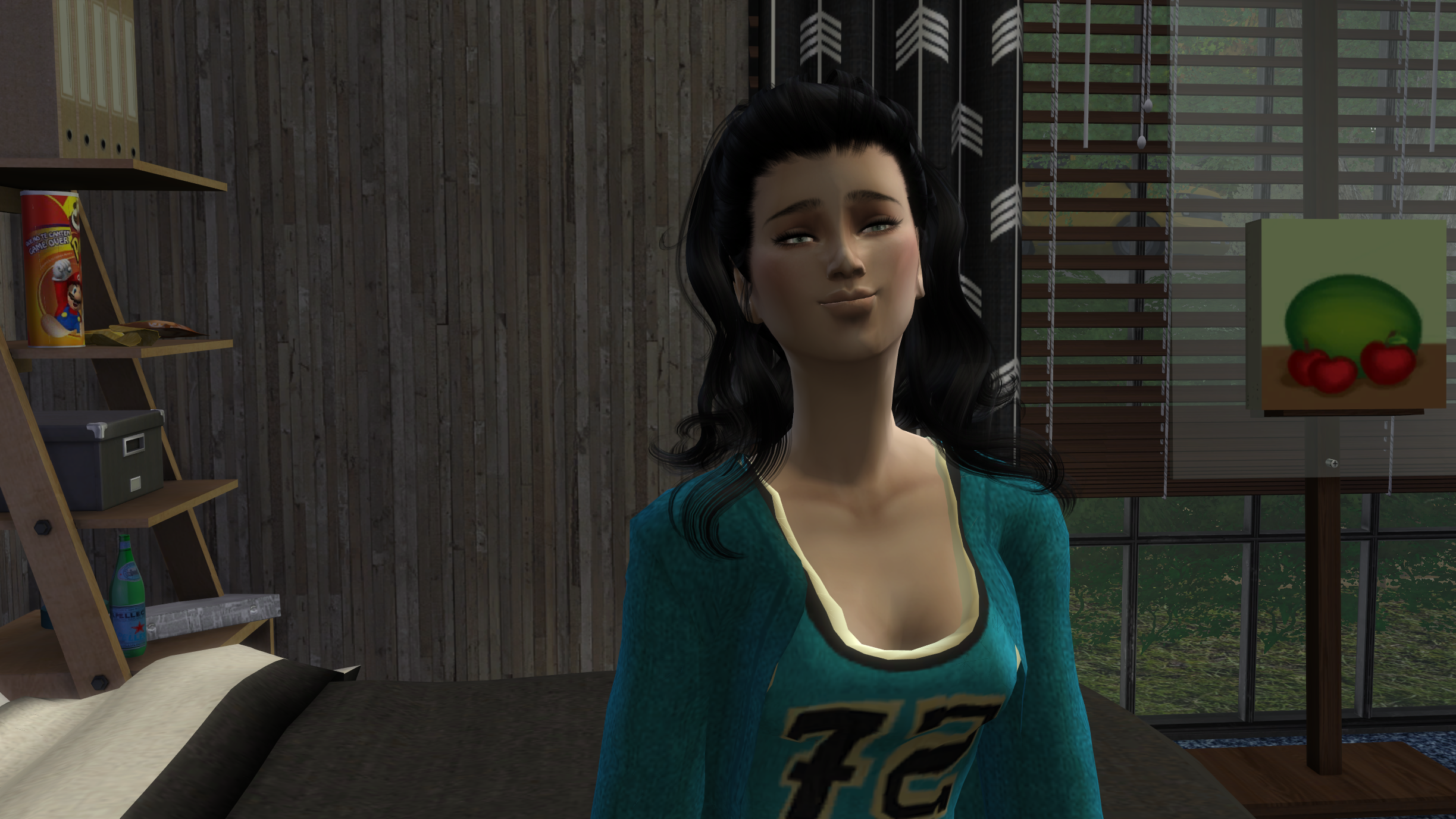 Esmée went to the front door. 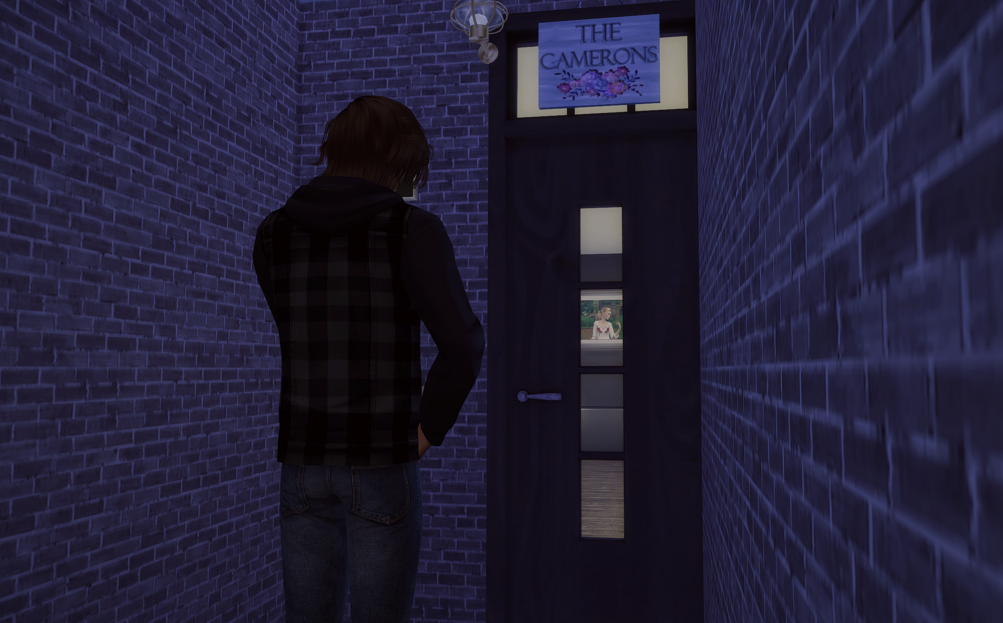 “What are you doing here?” she looked at Forrest. 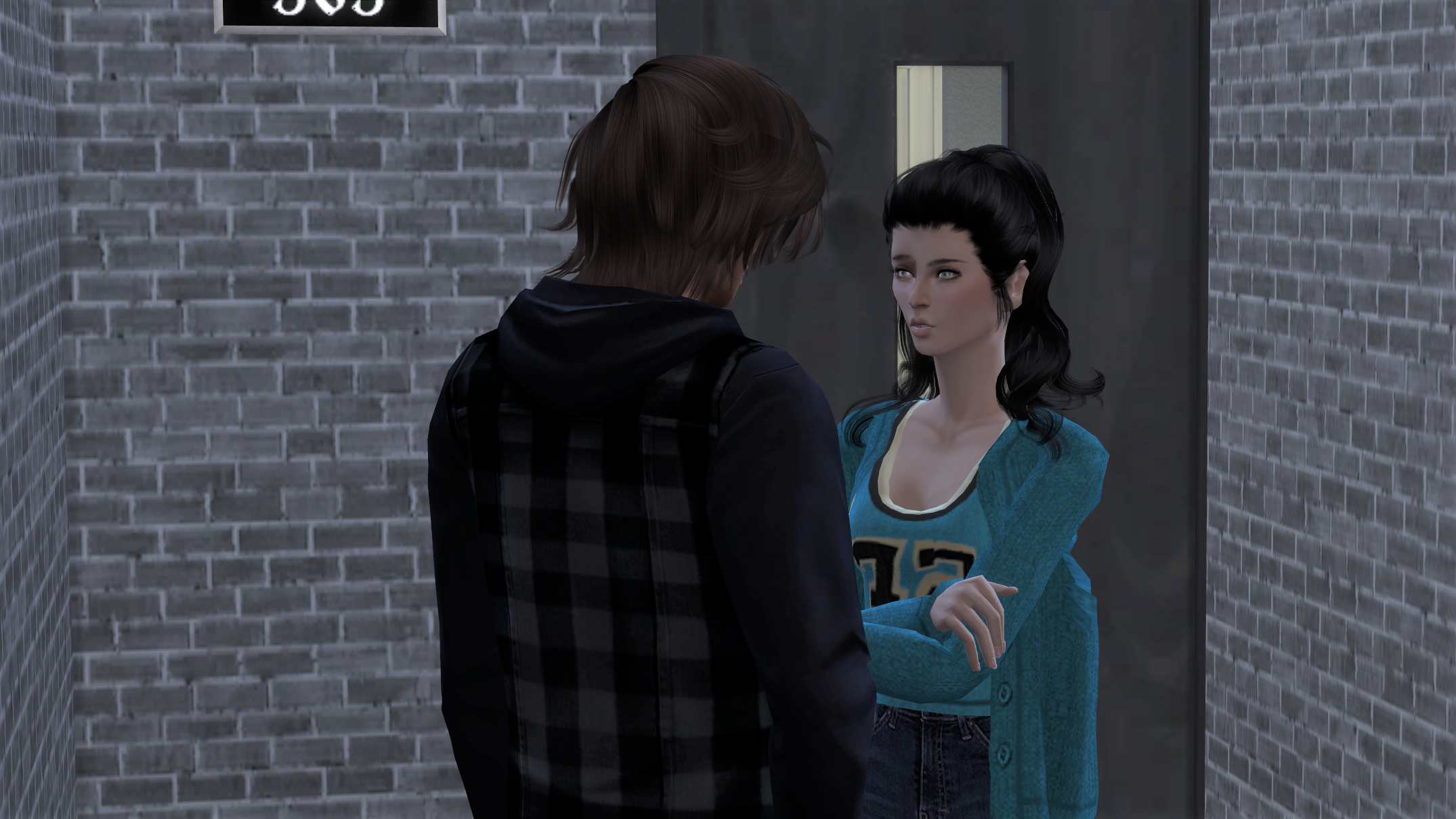 “Happy birthday.” he said and tried handing her the gift box.
She just stared at it, but didn’t take it.
“Did Ethan send you?”
“No. I am a big boy now and capable of my own decisions. Here.”
“You don’t have to buy me anything.”
“Now you tell me. But I already did, so here. Might as well take it.” 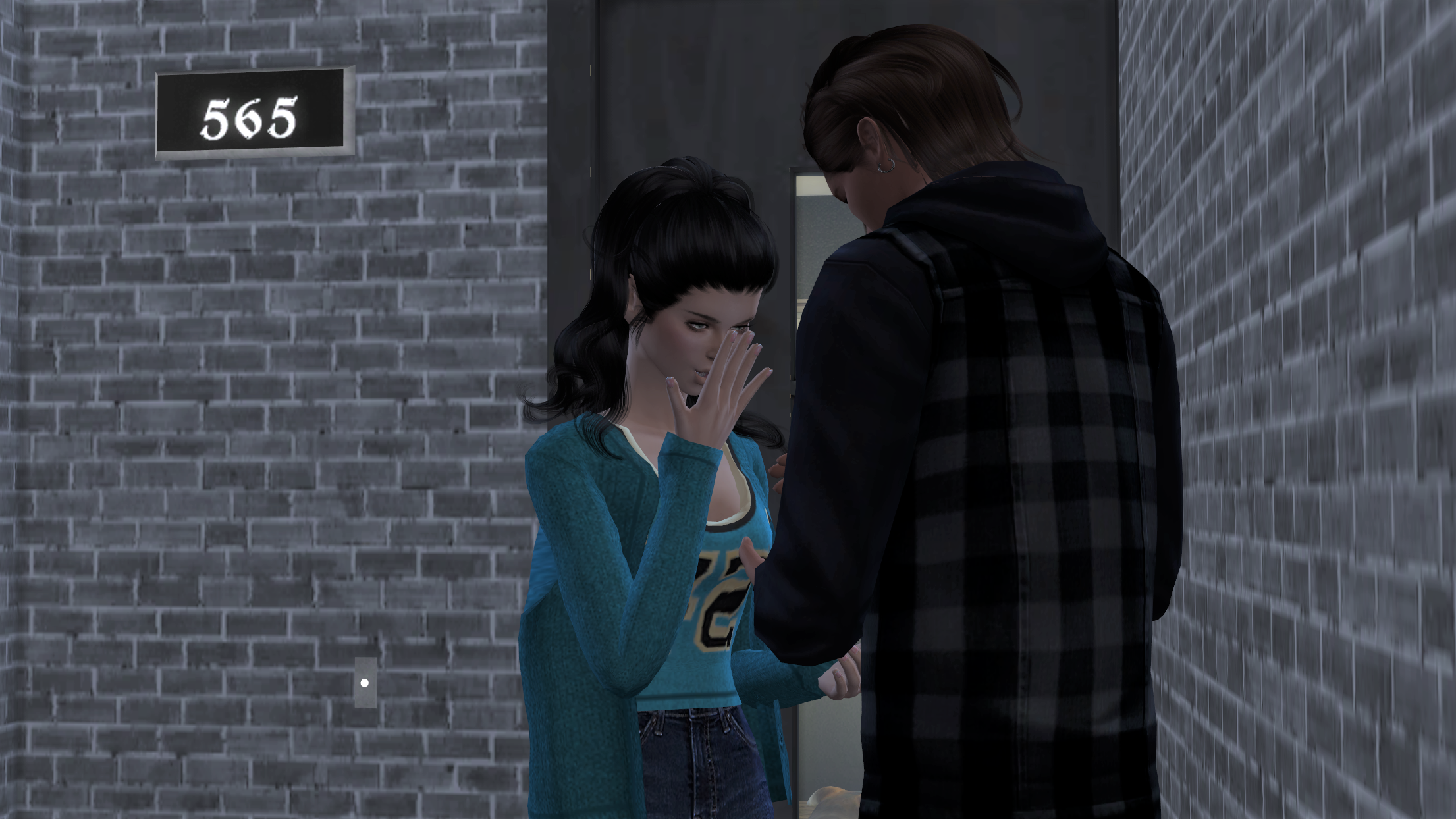 “No, thanks. Whatever is is, maybe you can return it.”
“I can’t. And won’t.”
“Then give it to your girlfriend. I gotta go.”
She shut the door in his face. 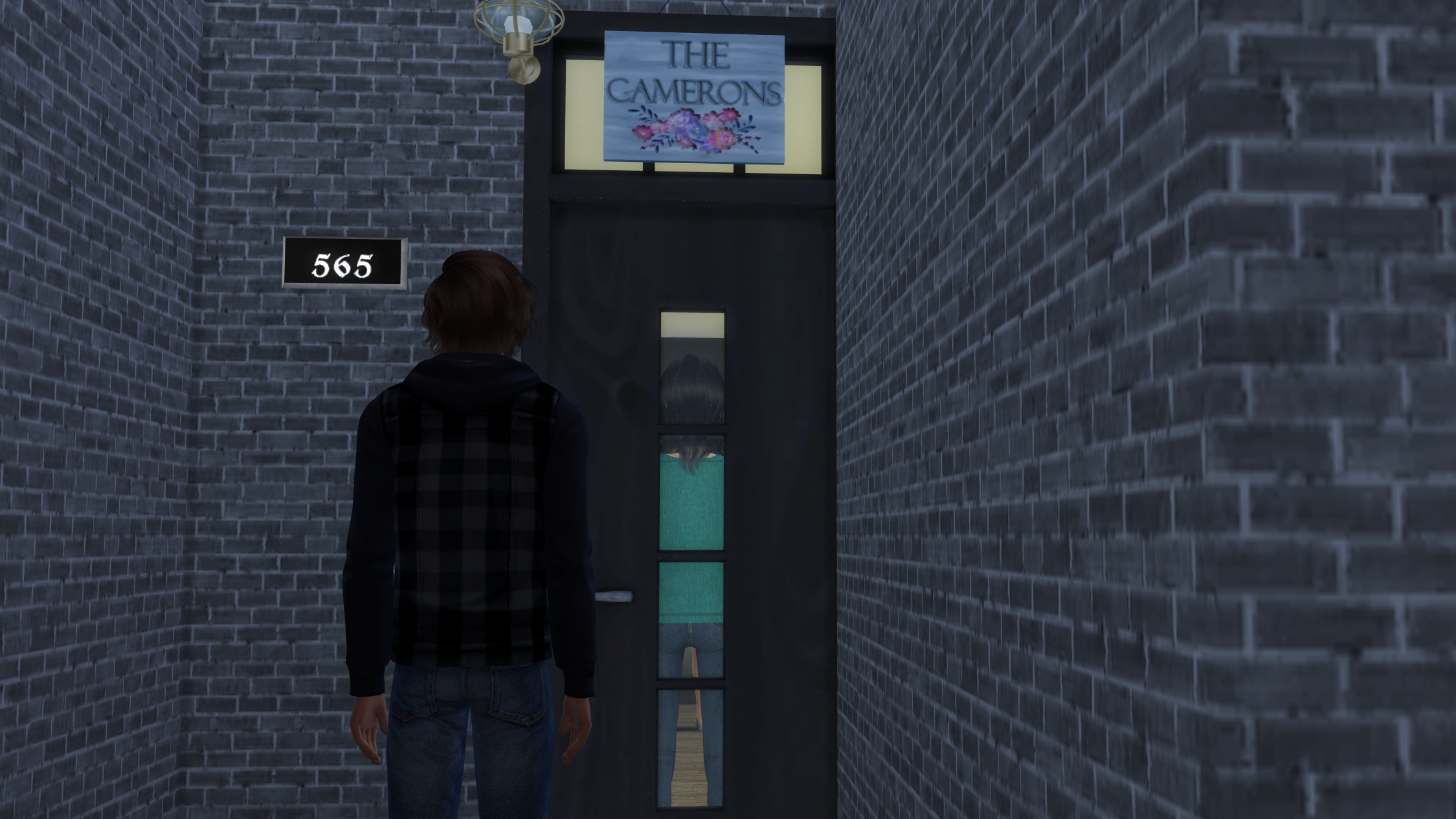 He wasn’t even mad at her for it, but he could see what Ethan had been talking about. Esmée seemed changed. Not once had she smiled, but there was something about her, something in her eyes that seemed aloof, sad, detached, shielded.
The door opened again and Ezzy’s grandma looked surprised. 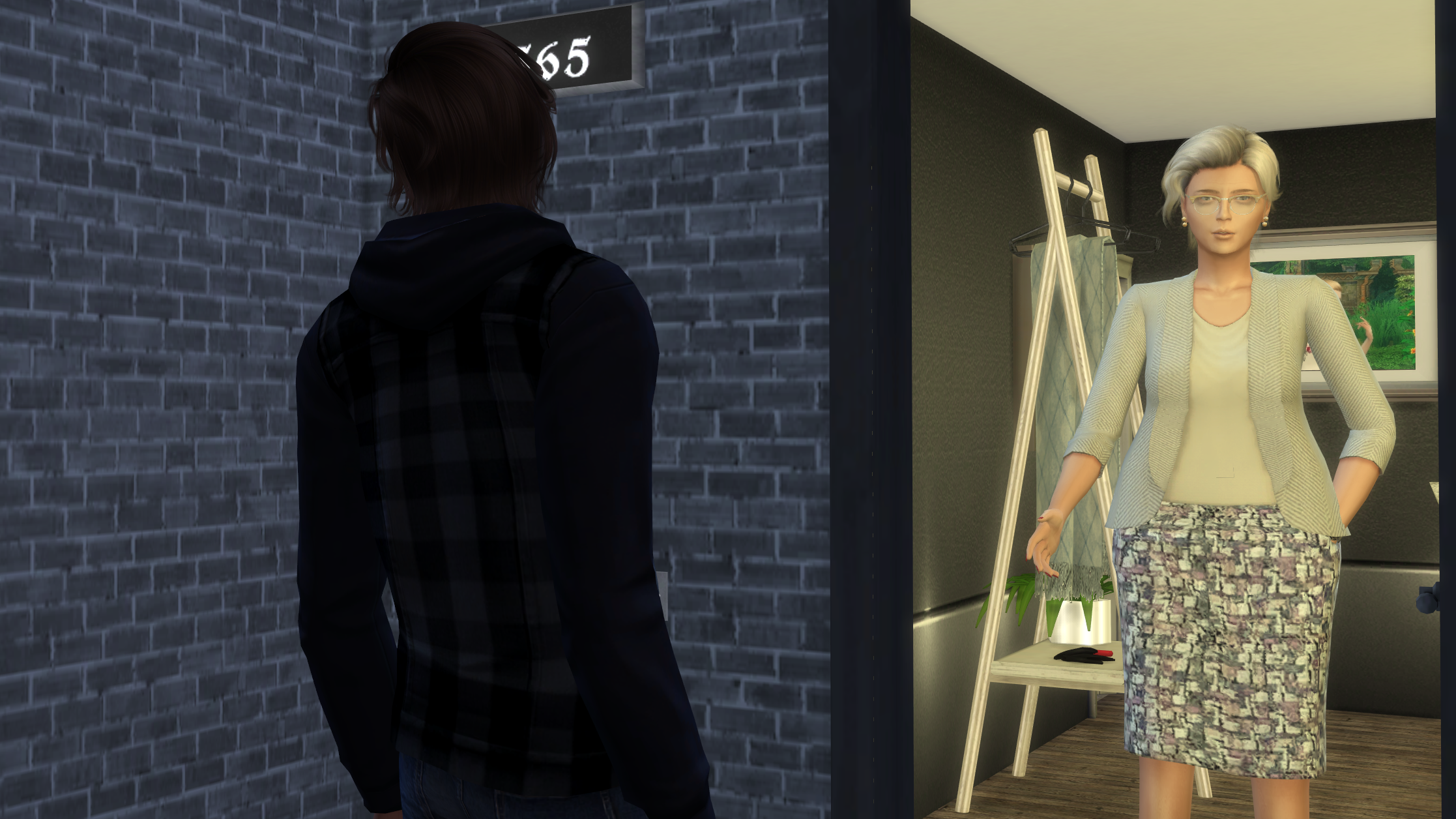 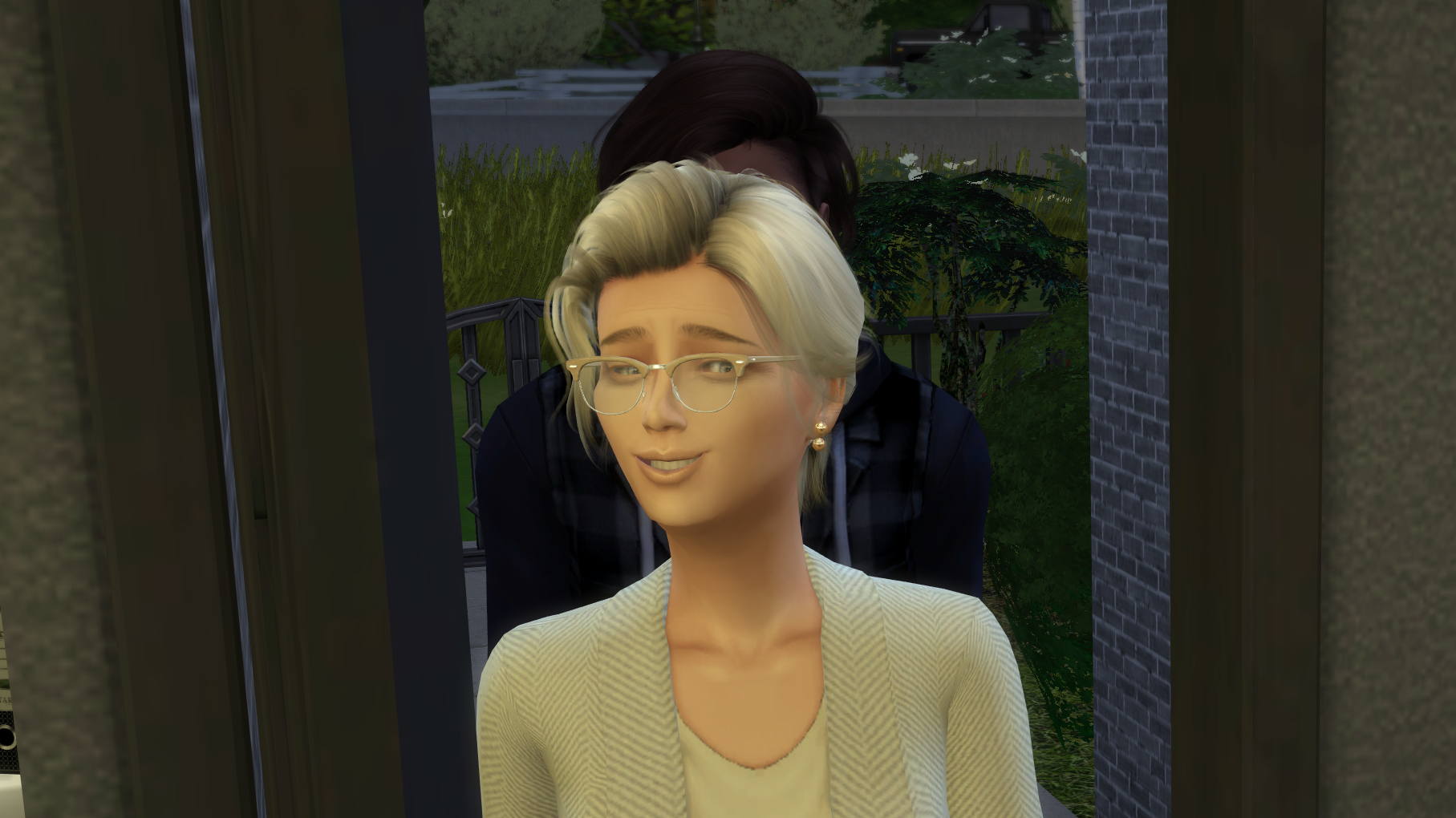 “Maybe you could give it to her? She didn’t want it from me.”
“What? Wait a second.” Katie turned and called for Esmée, who came out of a room looking not very happy to find him there.
“Ezzy, this nice young man brought you a birthday gift and you just left him outside? That is not nice at all! Take the gift! And what do we say?!” 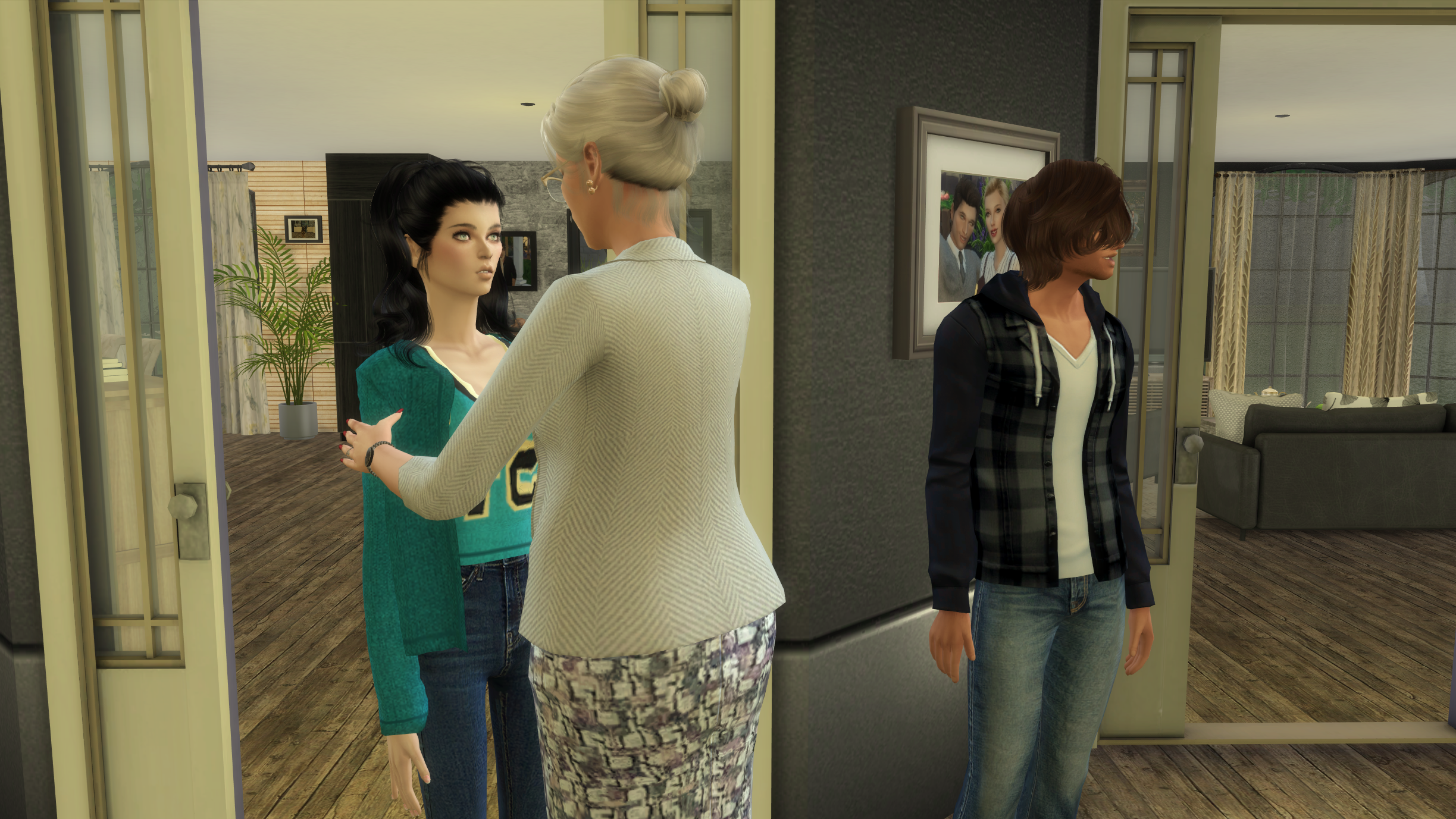 “Grandma…”
“Don’t you grandma me!” Katie told her firmly.
“I am not five years old!”
“Then don’t act it!”
“Fine. Thank you for the gift.” Esmée told Forrest.
“You’re welcome. Happy birthday. Again.”
“Open it!” her grandma demanded.
Ezzy did and produced a small necklace. She stared at it, when her grandma oooh’ed and aaah’ed about it, then insisted on putting in on her. 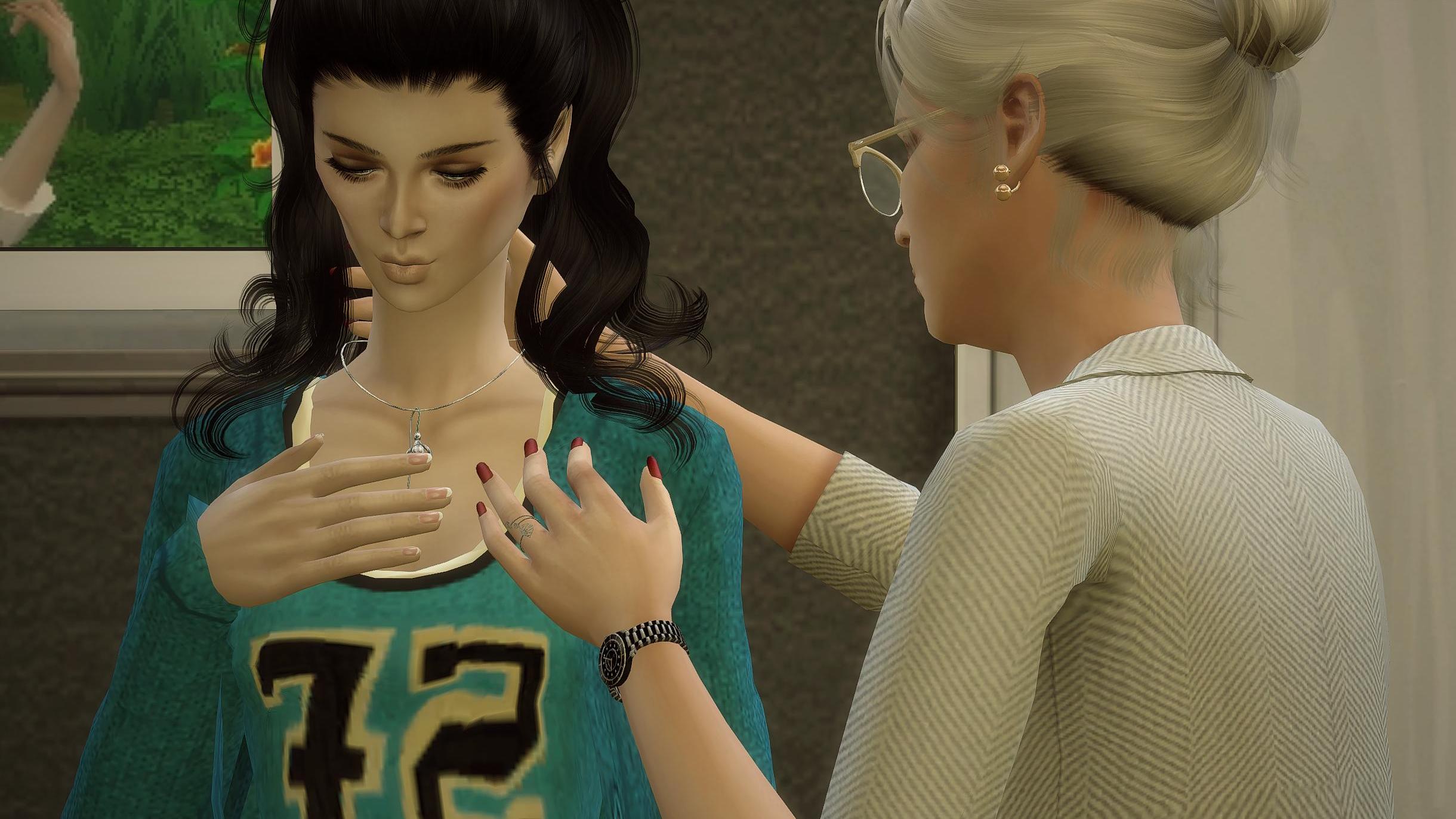 “Oh, it’s beautiful. Great job, young man. You have good taste!”
“Do you like it, Ezzy?” Forrest asked quietly.
“It’s … too much.” she said.
“ESMEE!” Katie reprimanded her. 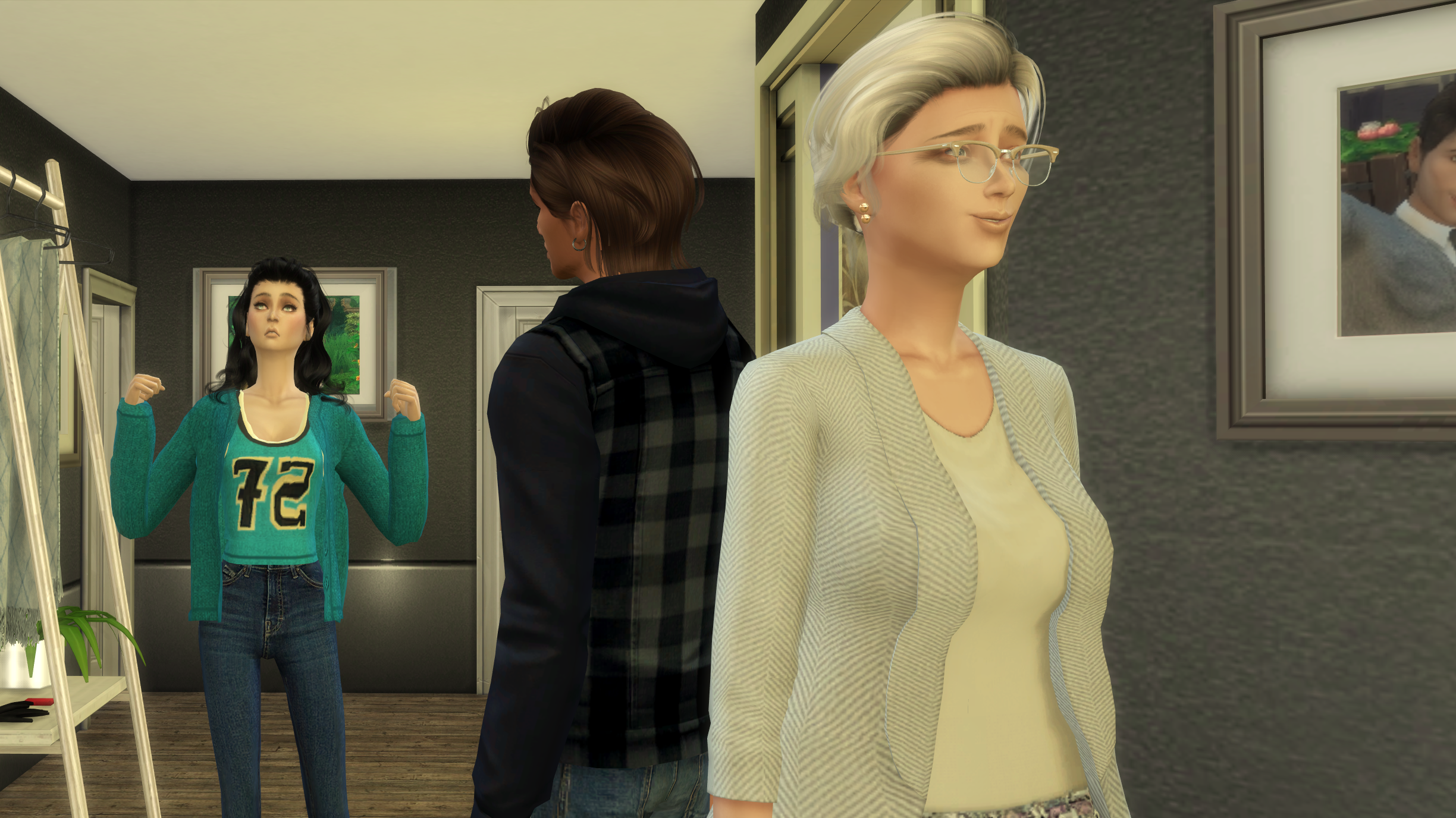 “Hey, wanna go get some air?” Forrest suggested to diffuse and maybe earn a brownie point with Ezzy.
“Yes, please!”
They left and walked a few steps around to the back of the house in silence, while Ezzy took the necklace off, a fact Forrest tried to ignore.
They sat down in the grass, she stared into the horizon, giving him a chance to look her over, trying to figure out what could have happened that she was so resentful and aloof all of a sudden. 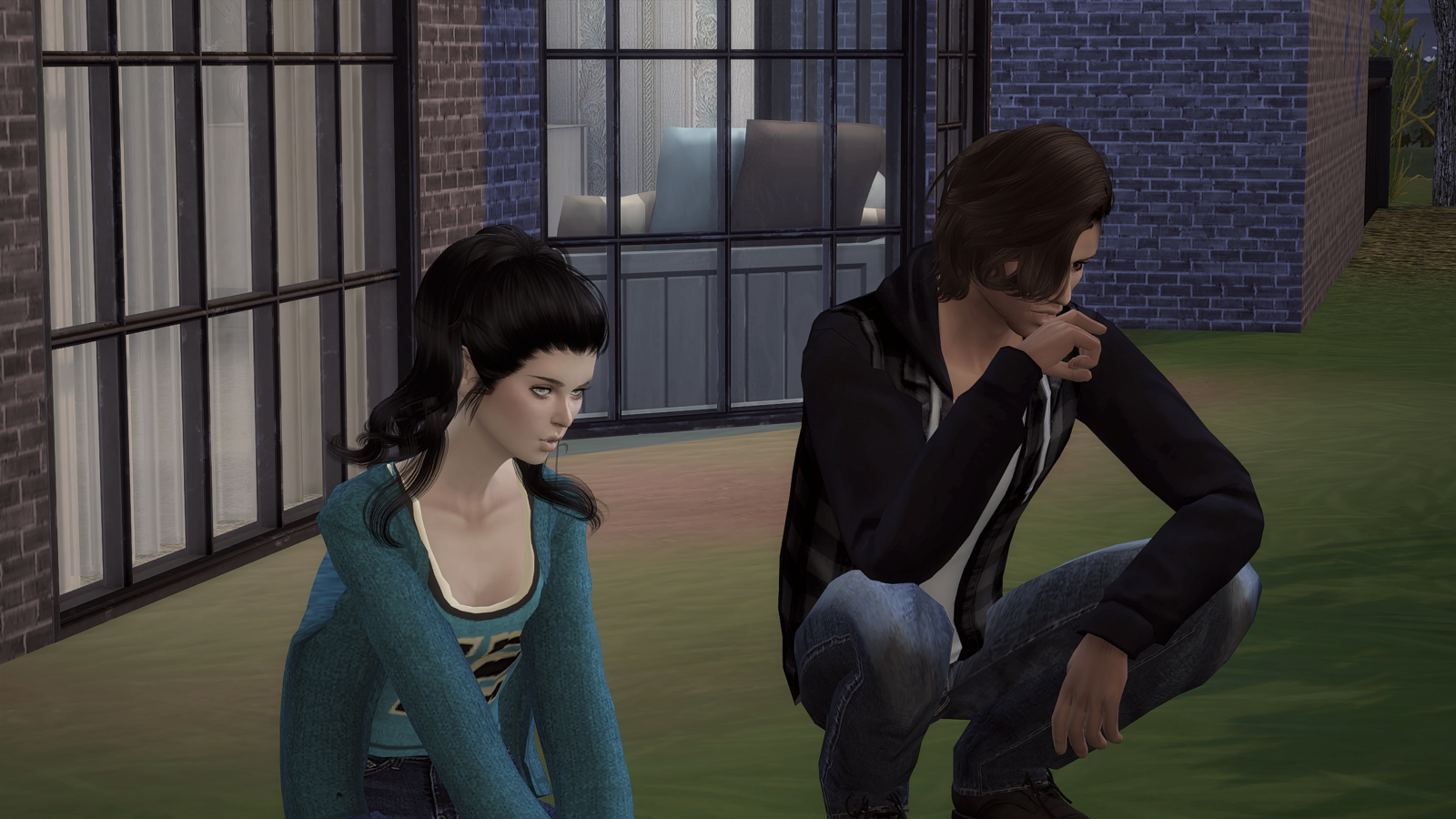 He had thought they had made progress. Before and during her vacation it felt like they were friends too, the three of them had so much fun together, but now she was icily shutting him out completely, obviously uncomfortable around him, while he felt better when she was there. Despite of it all. 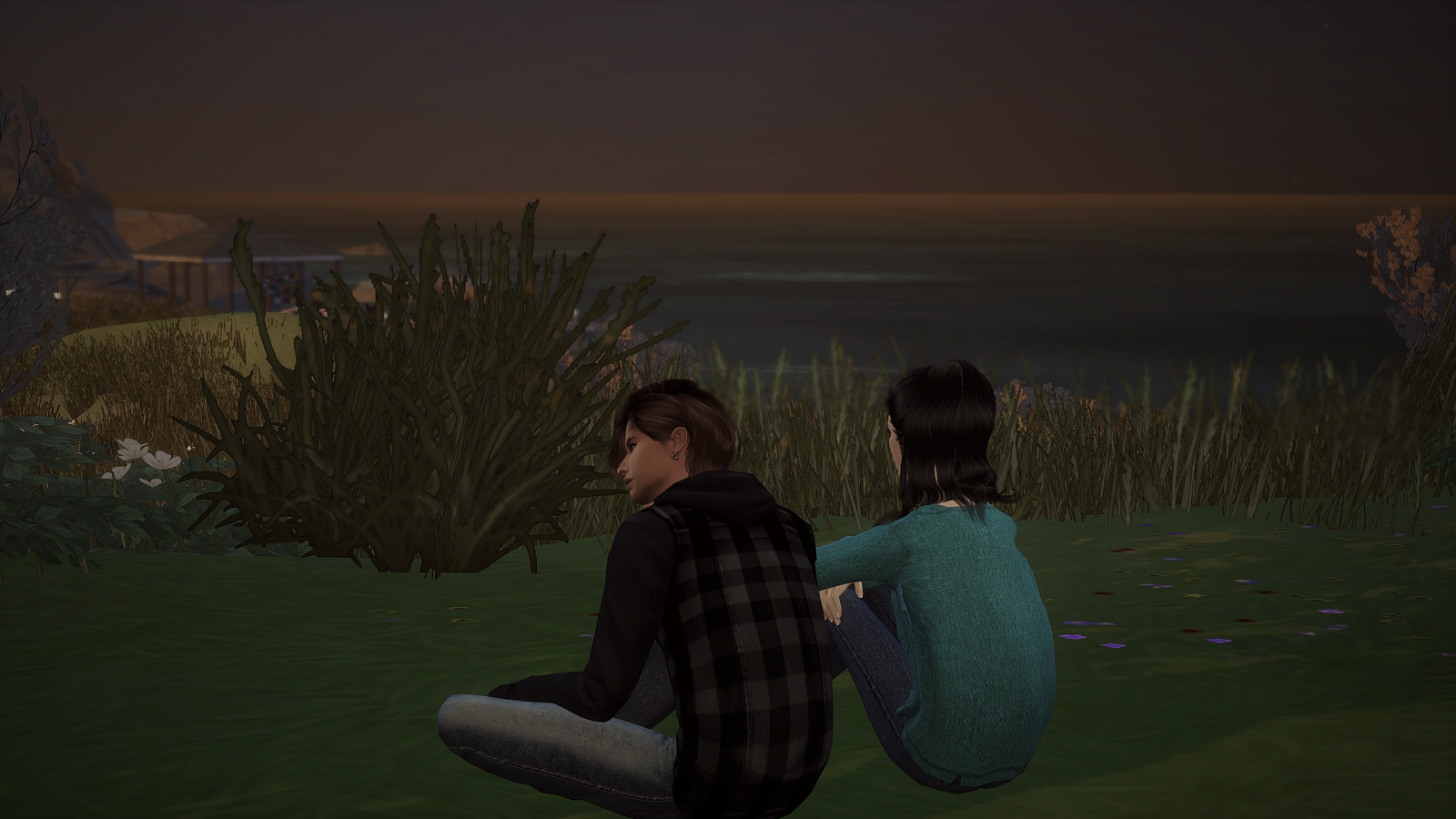 Her words left him speechless, they felt like another door shut in his face. And there was really nothing he could reply to it. The truth was not appropriate and he didn’t feel like more lies.

“So, what do you do at your grandparents’ all day?”

“This and that.”
He tried a variety of topics but if she answered at all, it was one syllable.
“I have to get back.” she said quietly.

“No. It’s right there. Get back to the party. Ethan will be pissed if he realized you ditched him on his birthday.”
“He won’t be if he knew I made sure you weren’t alone on your birthday though.”
“I like being alone. I don’t like people.”
“You’re just not hanging with the right ones then.”
“I spend my time with the only ones that matter. My family. This is me. Good night.” 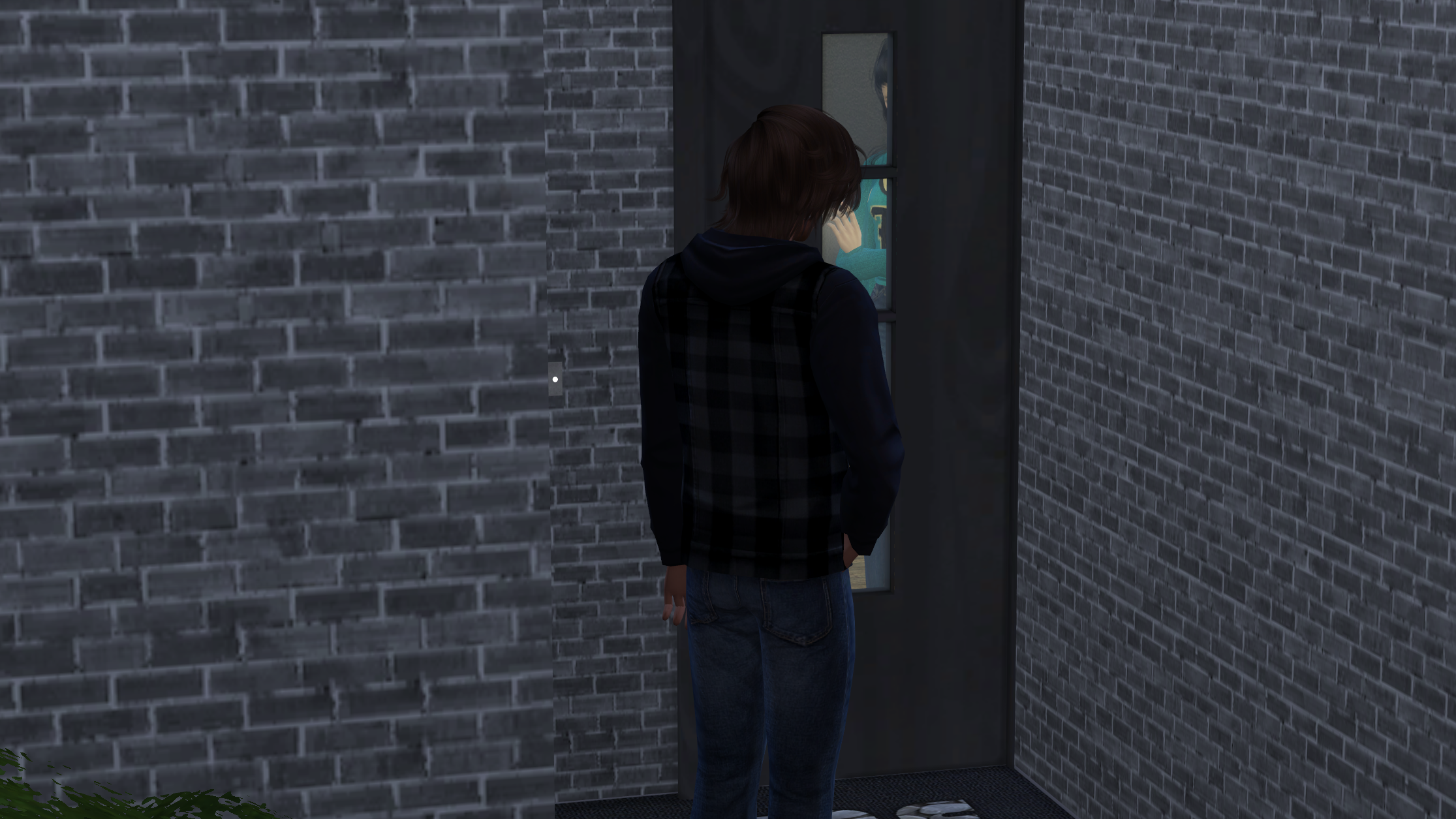 She slipped inside, leaving him to digest the bitter aftertaste her words left with him. 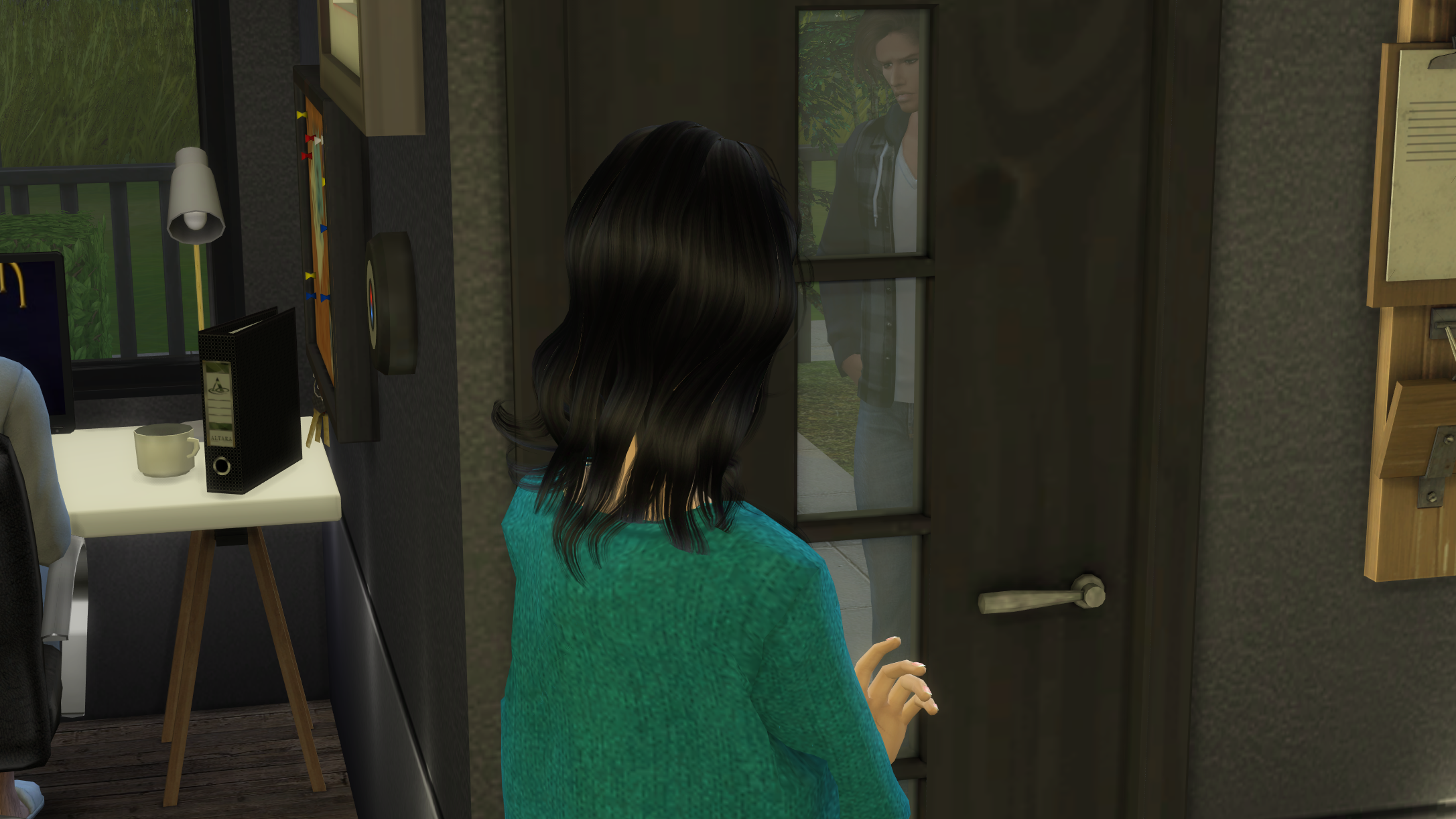 It had been many days again since Forrest had last seen Ezzy, the only reason he knew she was in the house when he was over visiting Ethan was when they heard footsteps above.

One day he couldn’t stand it anymore, pretending to go to the restroom upstairs, he stood in front of her door, about to knock, then just opened the door instead. Once he was in, she’d HAVE to interact, instead of just locking him out.

“Hey! Ever heard of knocking?”
“Yeah, overrated. Wow, did this room get even more bare since I last saw it?”
“What do you want?!” 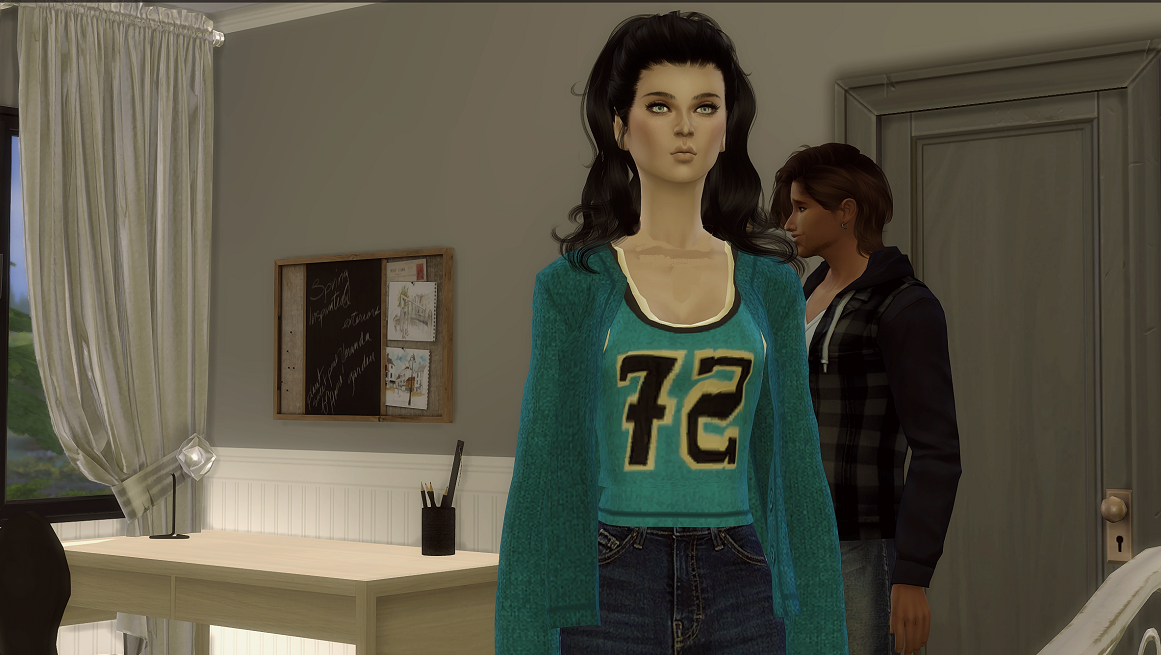 Oh, right, that would have been handy to have a good excuse for right about now. Oops.
“I … uh … oh, you took down the picture. Did it fall?” he deflected, while asking a burning question at the same time.
“No.”
“No what?”
“No, it did not fall.”
“Why did you take it down?”
“I didn’t like it anymore. Doesn’t go with the decor.” 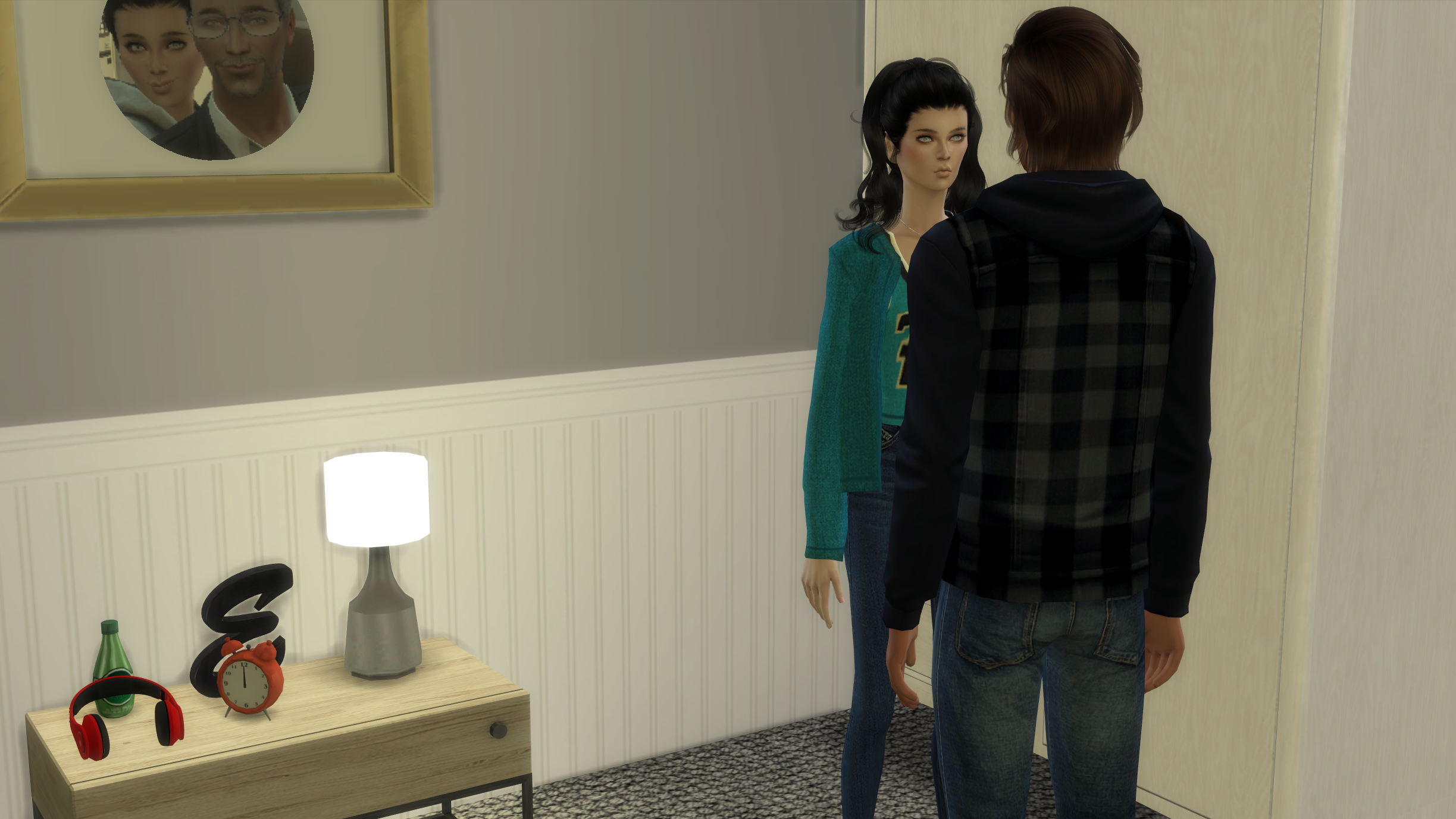 “What decor?”
“Just leave.”
“You’re not wearing the necklace. Do you not like that either? Maybe we can exchange it for something you like. Together.” 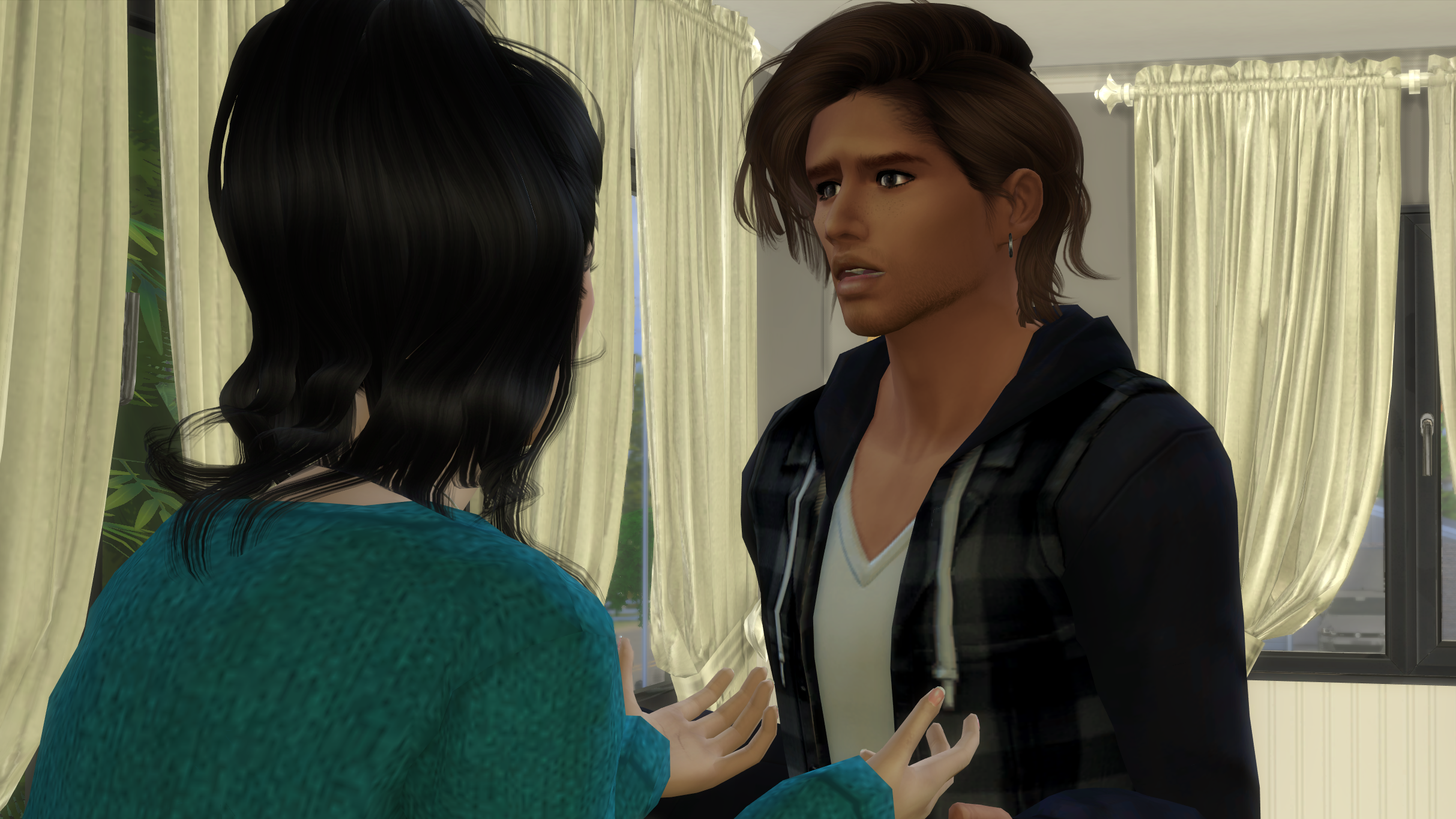 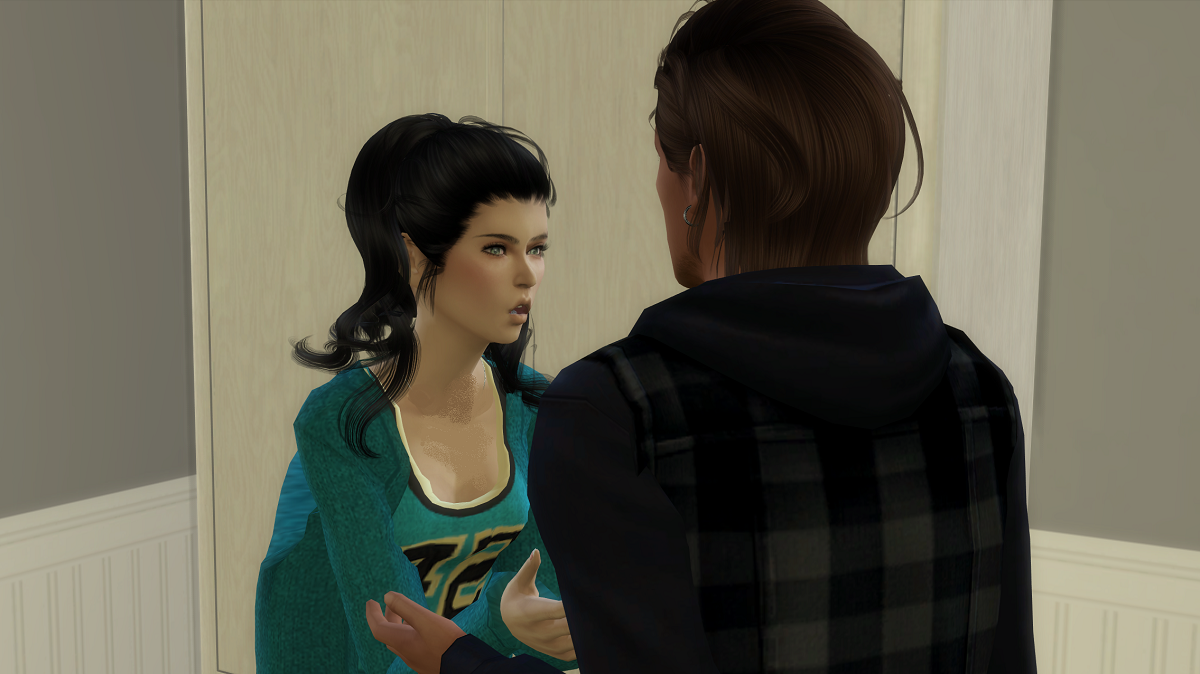 She tried to just stuff it in his shirt, when he caught her hands, both froze he wanted to say something but could not get the words out, while she just looked up at him startled.

“Hey dude, did you fall in? About to call in search & rescue for ya!” they heard Ethan’s voice, as he banged against the door of the bathroom across the hall. 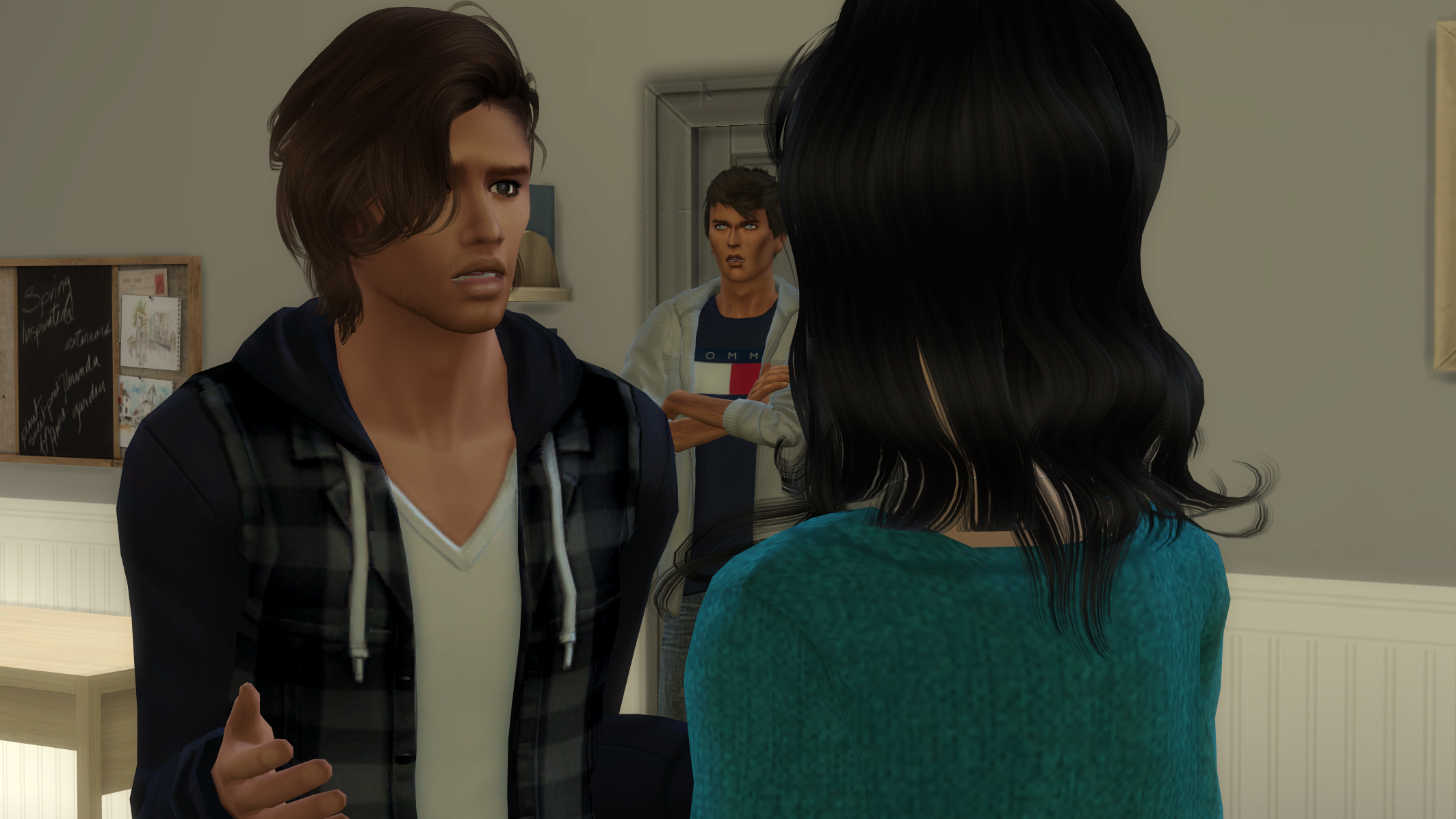 On their way to the stairs Ethan gave Forrest a few funny looks.
“What the hell were you doing in my sister’s room?”
“I told ya, just checking on her.” 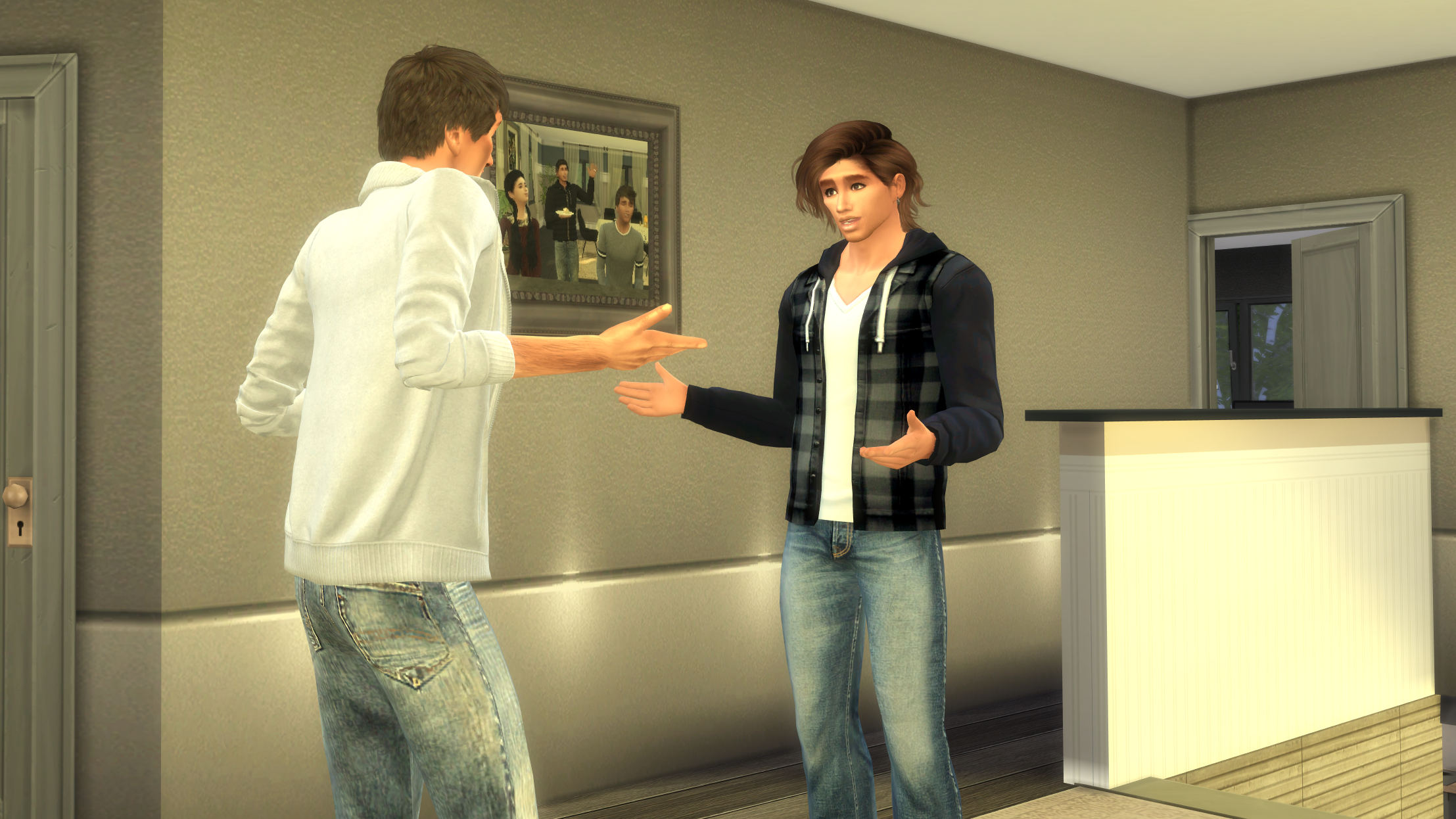 “I am warning you, man, don’t you go sweet on Ezzy!”
“What?”
“Hey, you broke up with that incredibly hot chick, I wouldn’t put it past you if you were looking for a rebound chick. But not her. Not Ezzy!”
“I don’t rebound. I am the one who broke up with Naomi. I don’t need to rebound.”
“Whatever you wanna call it, you are not gonna do it with my sister. Copy?!.” 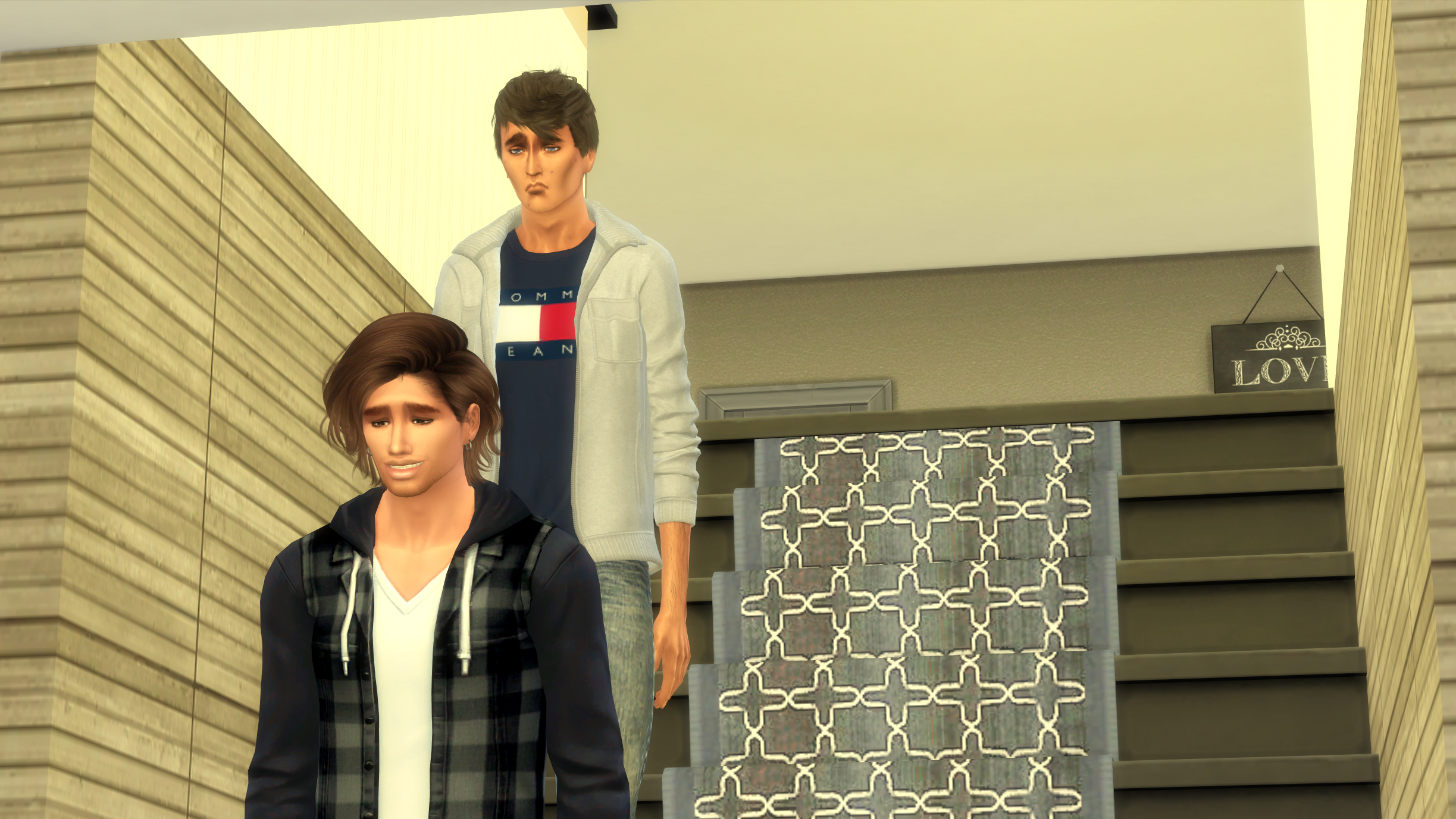 “Ok, ok, copy. Relax, man. Just saying I wanted to, hypothetically speaking, why not?”
“For one, because you are my best friend and she is my SISTER.”
“So?”
“You are not going to date my sister. Ezzy’s too vulnerable. Just don’t go there. The end.”
“Ha, as if. You know how she gets whenever she sees me. Fat chance anyway. And I told you, she is not my type!”
“As long as you remember that.” 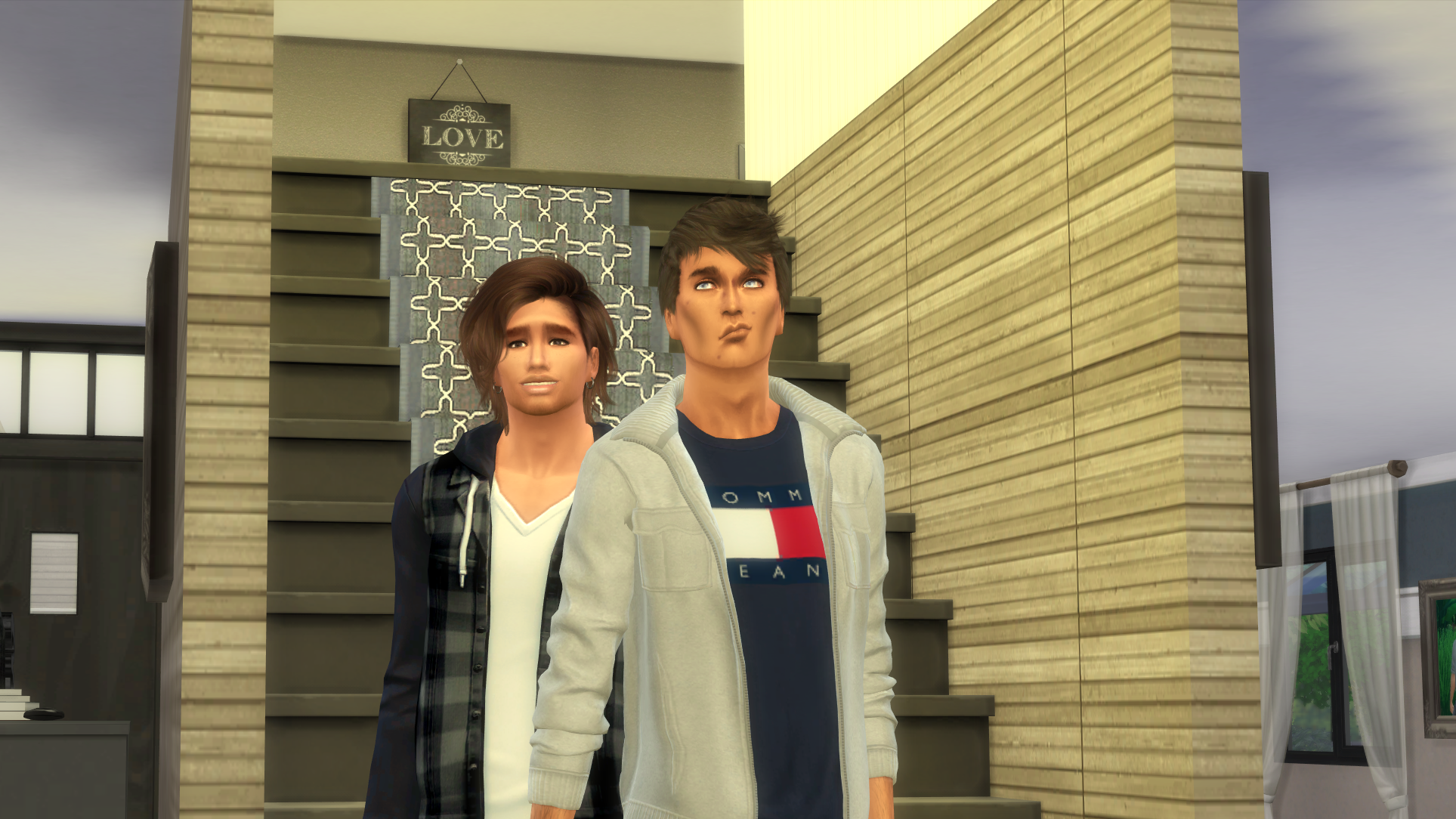 The subject didn’t come up again between the friends and a few days later, the twins, cousin Cole and their grandparents left for a beach vacation for two weeks.
This time the only text messages Forrest got were from Ethan.
-tbc-