Shared joy is a double joy; shared sorrow is half a sorrow.

Nick pulled the box from Ezzy’s hands. Today was moving day, she was moving back into his penthouse from her parents’ home.

“Goddamn it woman! How many more times do I have to ask for you to sit your ass down somewhere and let us men do the heavy lifting. There are two strong guys here. You and your mom just worry about unpacking and shit.”
“What the fuck did you pack in these, kid? Did you pack our pool and garage?!” KC complained entering now carrying a box. 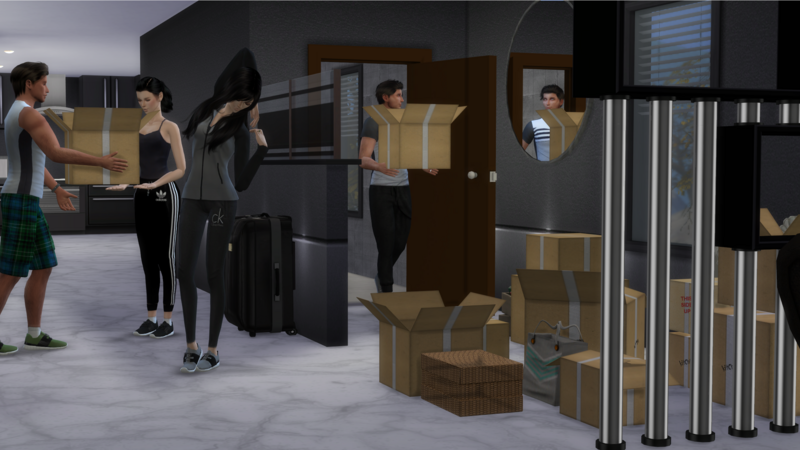 “Okay guys, enough with the cursing. Nick and KC, final warning. I always heard that girls marry guys who are like their dads but I didn’t think that included a passion for cursing!” Everleigh said with determination.
“Yes dear.” KC told her with a kiss on the cheek.
“Yes Mrs. C.” Nick affirmed.

Ezzy didn’t have too many things to be moved into Nick’s place, and the move back into his penthouse went quickly, especially with her parents’ help.

KC had flown back to Del Sol Valley with her to tie up the loose ends there, pack up what little she had in her studio apartment and they were back within two days. The next day was today, and they were moving her into Nick’s place again.

Esmée began to fidget and bend, as if in discomfort, Nick and Evey were eyeing her when suddenly Ezzy yelped
“Ouch! Oww.” she cringed in apparent pain, doubled over then straightened up stiffly, here eyes widened with fear.
Evey, KC and Nick all dropped what they were doing and ran to her, she seemed breathless and pale. 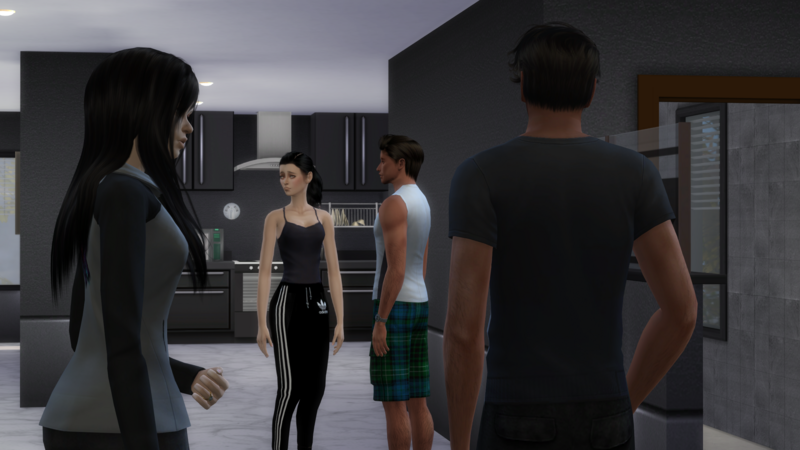 “Get her to the hospital – NOW!” Evey ordered.
“You guys stay here, I’ll call you!” Nick said alarmed as he scooped her up and ran out the still open door.

The doctor entered with a solemn expression on his face as he shook his head to himself.
“Are you the father?” he addressed Nick.
“Yes, Nicholas Gray.” 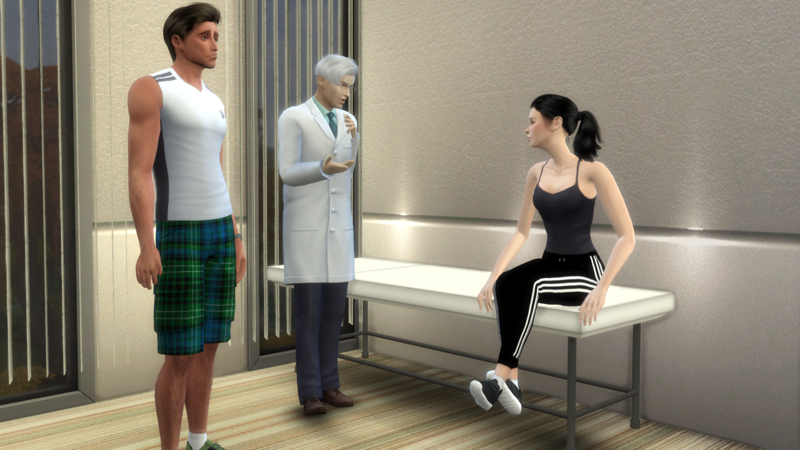 “Would you two join me over at the desk?”

They all got settled in the suggested spot.

“Miss Cameron and Mr. Gray, I am very sorry, and I wish I had better news, but all I can do at this point is to confirm your fears. Unfortunately spontaneous abortions – or miscarriages – are a threat in the early stages of a pregnancy, especially after your body has been weakened.”

“Weakened?” Ezzy whispered.
“I noticed in your file that you have had some psychological trauma. And you suffered a miscarriage prior to this one not too long ago. Also, as I am sure my colleague who attended to you then mentioned it to you, but I will say it again, your BMI is alarmingly low, also a risk factor sometimes.”
“Did I cause this by lifting heavy boxes?”
“Ez, don’t.” 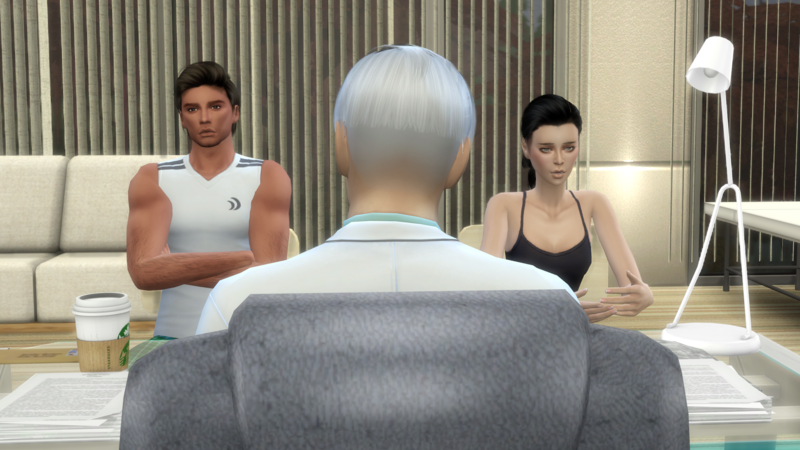 “No, Miss Cameron. That would not have an effect on a pregnancy, especially not this early on. Later it may cause you backaches. But it does not cause this. Truly, Miss Cameron and Mr. Gray, early stage miscarriages are not as uncommon as you may think. Some women are more prone to it than others, and some may never know it happened, depending on how far along they were. You were just a few weeks in. We’ll put you on some vitamins and some supporting medications, and need to work on getting your weight to a safer level. You truly are at a dangerously low value. Look at your arm. I should not be able to wrap my entire hand around your upper arm, Miss Cameron. I would suggest you think about some in-patient options to …”
“No!” Esmée said quickly and determined. 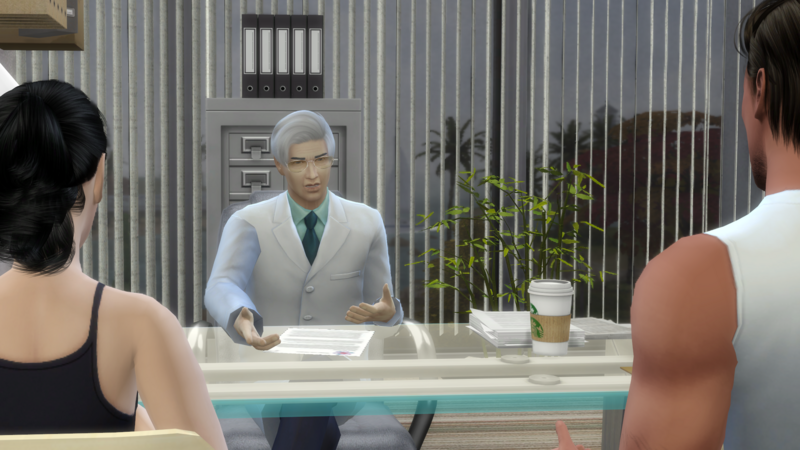 “I’ll make sure to fatten her up, doc, we appreciate your concern, but we both have been through a mountain of traumatic experiences of late and are trying to recover. Together. I don’t think it would be beneficial for either of us to be separated again. The baby was not exactly planned. Now, I hope it is okay for me to ask and I am not speaking out of turn here, but what are the odds of her having a baby at all?”

“If you manage to get her weight up into a more normal range in a healthy way, so not by feeding the poor girl cheeseburgers till she bursts but by eating regular meals of healthy, nutritious foods, I see no reason why she could not successfully carry a pregnancy full term. I took the liberty of looking through her medical history and saw no red flags, her vitals are good, her blood work is good, she didn’t list a family history of pregnancy issues. I would, however, suggest to not even try for a baby again until she is at least closer to a healthy BMI. While early onset spontaneous failed pregnancies are not as traumatic as they would be past a certain point, we do not want to chance having to go through this again, especially considering you both’s history with physical and psychological issues recently.”

“What if the father has such a history with problematic pregnancies in his family? My mother miscarried seven times until she had me and there were complications during the pregnancy with me and during my birth, preventing them from having another kid.”

Esmée said nothing, just stared at Nicholas with the shock written all over her face.

“Mr. Gray, I can confidently say that would not affect her. You two should be fine. I would suggest you try to take it easy, relax, heal before your try again. This goes to both of you.”

On the way to the car, Ezzy  pointed at a bench in front of the hospital, so they sat down.
“I am so sorry Nick.” 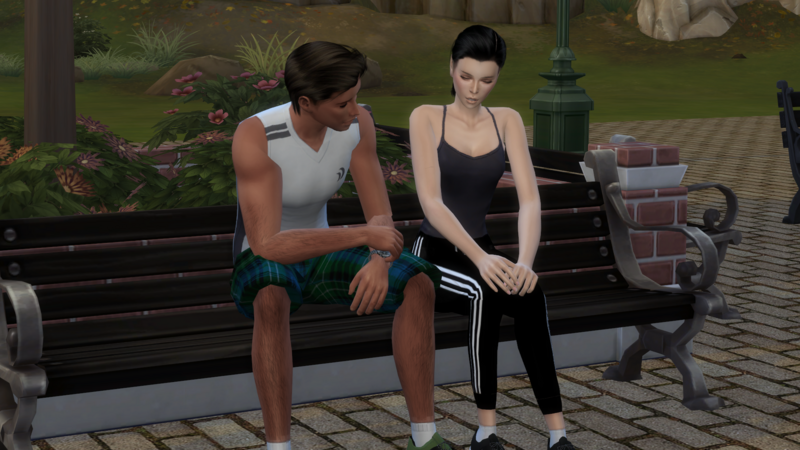 “I am sorry too, baby. But we are fine. We will be fine. Here, look at me. We will be fine. Just another setback. You heard the doc, we’ll put some junk in your trunk and we’ll have a dozen kids before we’re thirty.”
“Umm, slow your roll, man. Not too much junk, don’t want you to leave me because I turned too chunky. And not a dozen kids, please.” 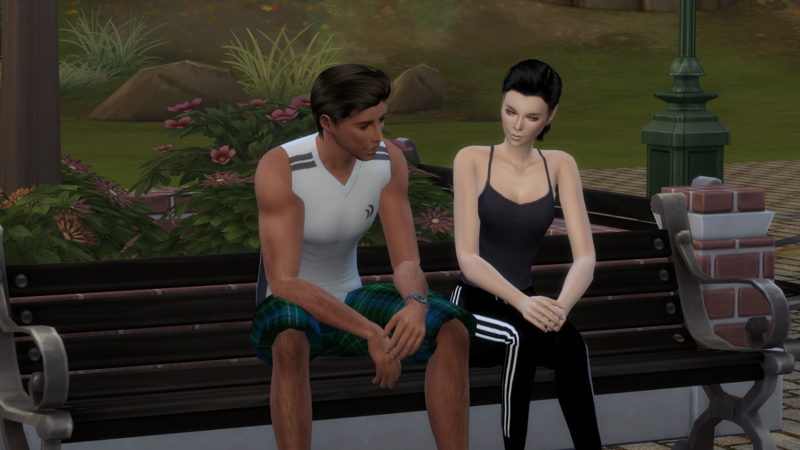 “Actually, I am really liking that idea. Make you nice and thick so you can’t run from me no more and I won’t have to chase you all the time.”
A brief moment of silence fell, until Ezzy spoke quietly.
“Was that true what you said in there, about your mom?”
“Every word of it.” 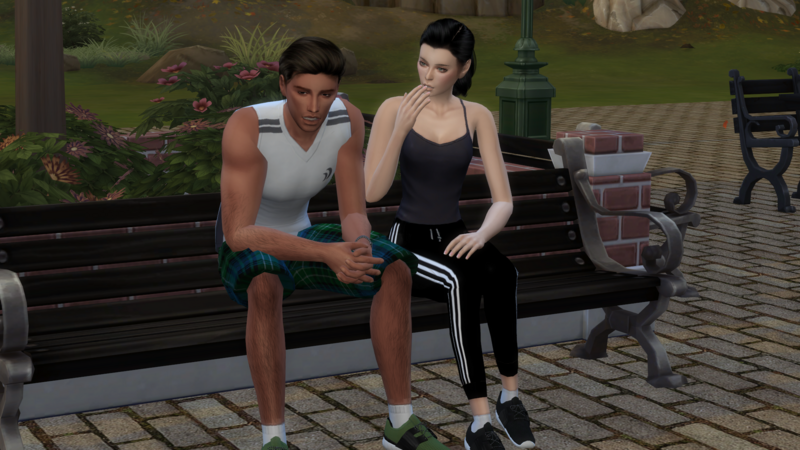 “Nick? Why have you never told me about that? That would have explained so much.”
“Because it is not my fault or yours and I heard that same story so many times since I was old enough to understand it, that I just cannot feel sorry for her anymore. I am her son, not her property. If you cling to someone so tightly that you nearly suffocate them, they won’t want to come back to you. Ask any parent, you only borrow your children, not own them. Look at your parents. They clearly love you and Ethan, but never suffocated you guys.” 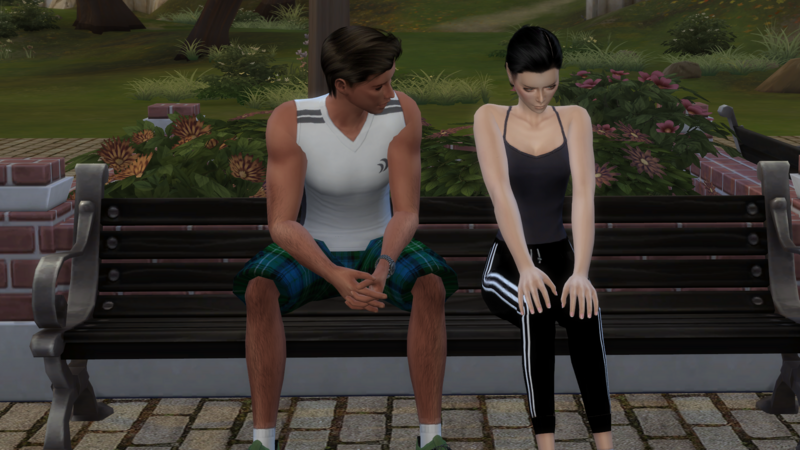 “Nick? We’re going to be okay, right?”
“We ARE okay, baby. Just a setback. We did all our crying, it won’t change anything. We have cried so much over the past year and a half, enough already. It is sad, we acknowledge it is sad, but I have more important things to worry about. I need to get my girl healthy. Then we’ll do this right. Once we’re all settled in, we start planning a wedding. And a honeymoon. And during that honeymoon we will have ungodly amounts of calories and sex, which will fatten you up and knock you up and we will have a baby. The end.” 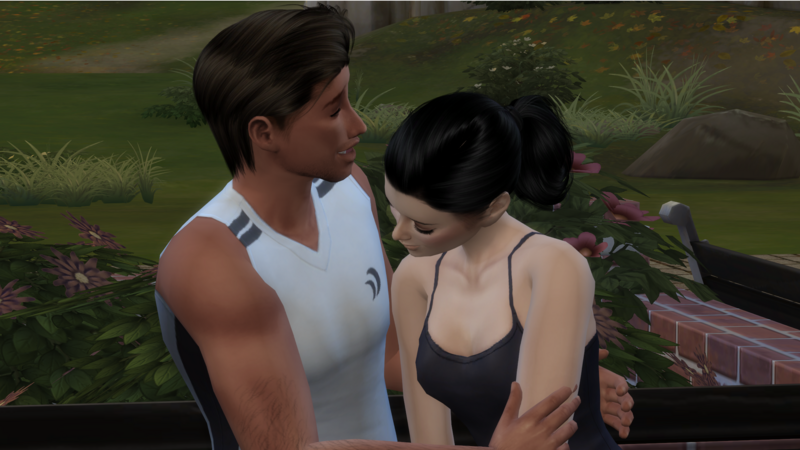 “Shhh Nick! There are people around us!”
“So? We are a young couple, we look like a young couple, if any of them were to be shocked by us getting in a lot of bedroom action, then I don’t think us talking about it will make a difference to their level of IQ. Joking aside, Ezzy, I know this is not how normal people react to what just happened, but we are not normal people. Not after all we have been through. We got each other, we got this, we just cannot dwell on it. We need to move on. One day we will be to a point where we can be like everybody else. But not now. We have to be strong and march on. And stay positive.” 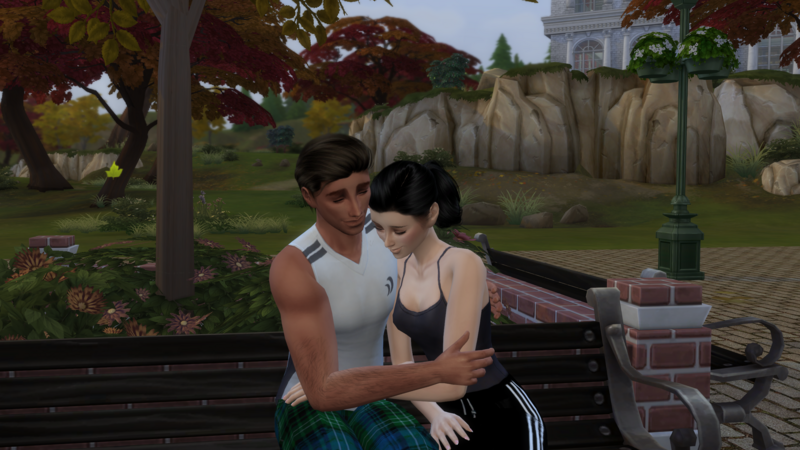 “Nick, I never want to be like everybody else. I want to be us. Always us.”
“All right, that leads us to a very important question then: Italian or Mexican?”
“You are not seriously thinking about food now?!” 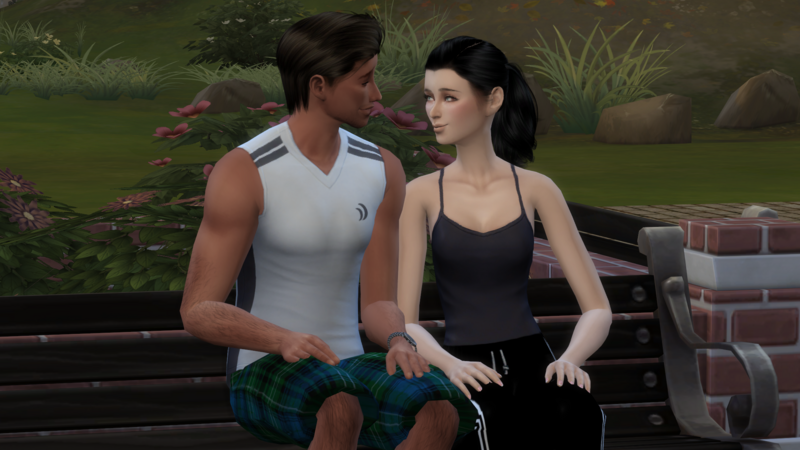 “Oh, I am! We are. You heard the doc. We need to get some pounds on you. No time like the present. So pick or I will pick for you? And you may end up eating mayonnaise with a spoon.”
“What about mom and dad?” 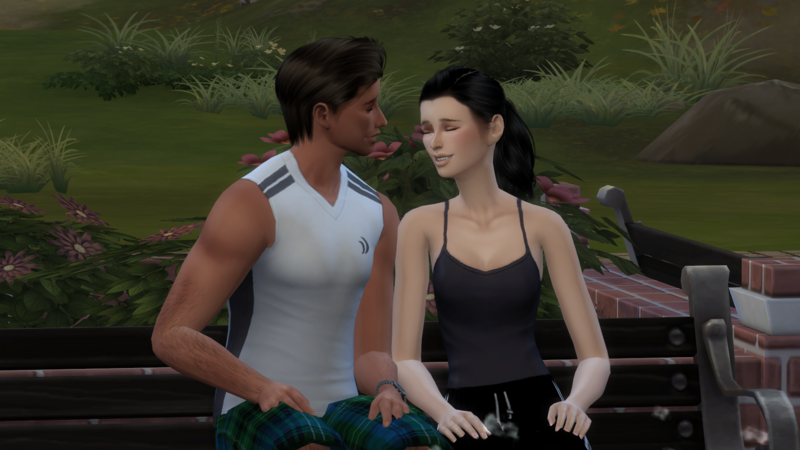 “They can meet us there. My treat.”

This time the tragedy was easier to process. Nick was right. Any other couple could and would mourn the loss, but they just couldn’t. Nobody but KC, Evey and Ethan knew about the pregnancy yet, the rest of the family only knew that they were a couple again and engaged, which helped keep the awkward moments contained.

A few weeks after that day they already began planning the wedding. There was no definite date yet. Just talk about ideas. 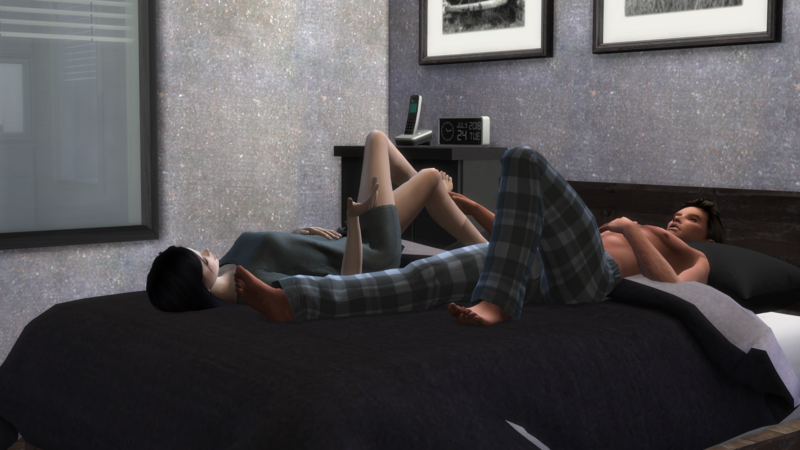 “How about this dress?” Ezzy grinned as she showed Nick an all black floor length gown, just to get him roweled up.
“Sure, if you want to get married naked, cos I swear, if you show up in black, I will rip it off of you. Hope you’ll be wearing cute underwear for the pictures.” he reached for the magazine and tossed it across the room.
“Tell me how you really feel.” she chuckled.
“I really feel happy, Ez. We have each other, we have a future, meaning we have everything.” 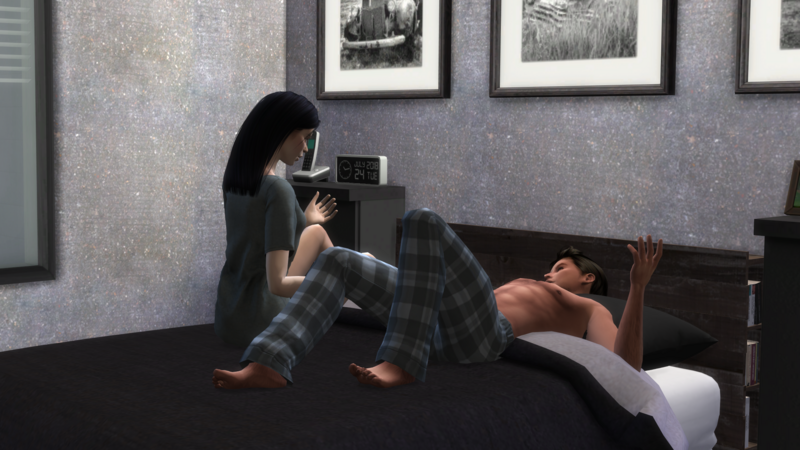 “Wow, sometimes you sound so incredibly smart and mature.”
“Want me to say some stupid immature shit to balance it out?” he chuckled. 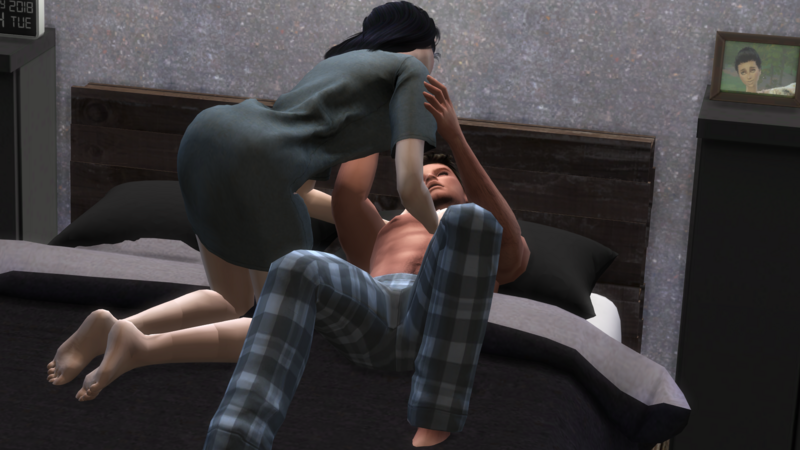 “No, let me just be near you, admire you and bask in what a lucky girl I am for a while. Man, Nick, if you weren’t as persistent as you are, we would never ..” 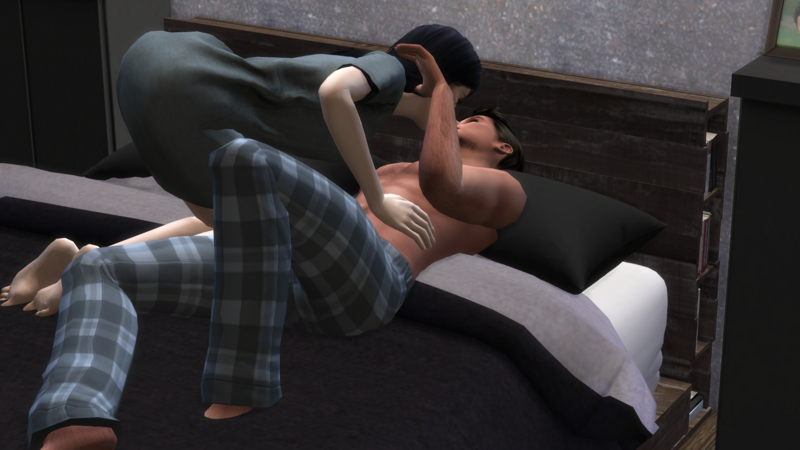 “Hey, shhh, none of that. Come here. You can ‘if ‘and ‘but’ things to death. Reality is that I AM a persistent, arrogant, annoying son of a bitch and you need that. And you are the most caring and nurturing, crazy-ass firecracker woman I have ever met, and I need that. I may just be a bit less stubborn that you, and realized that sooner. But now that we both do realize it, watch out world.”
“Nick? I am really sorry I punched you when we were 13 …” 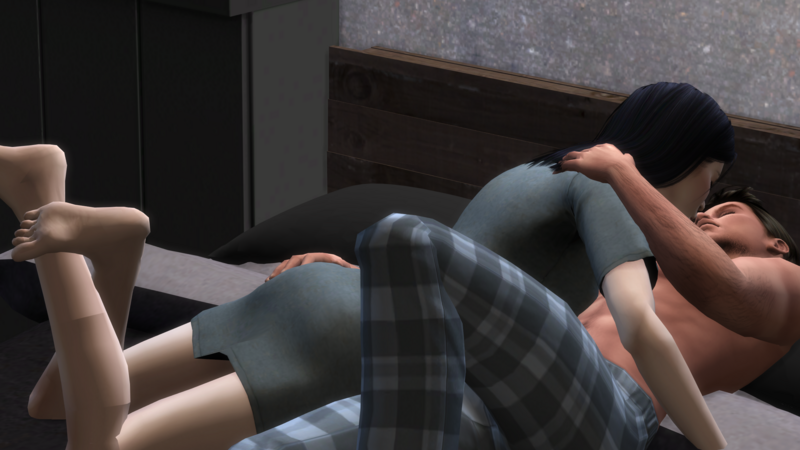