Once the kiss ended, Ethan stood there, unable to say or do anything except embrace her while feeling in some sort of haze. 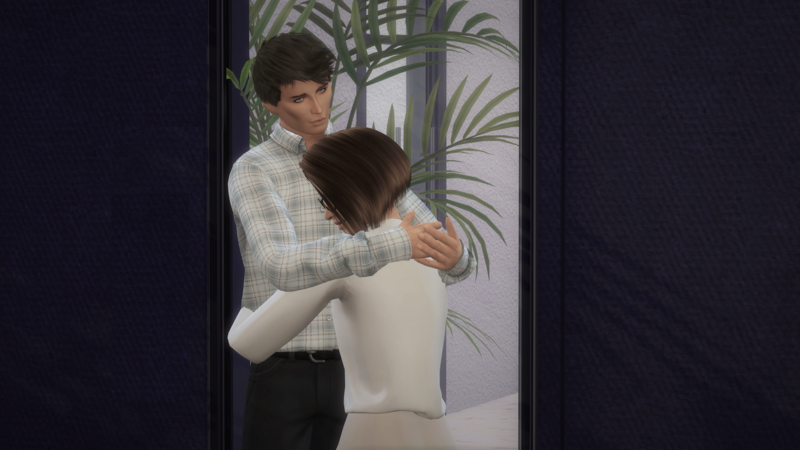 At some point Grace pulled away a little, her eyes searching in his for any sign of approval or dismay.

When he still wouldn’t, couldn’t put into words what he wanted to say and ask, Grace whispered.

“Please, say something. Anything …”

“You shouldn’t kiss me like this, Grace … it makes me … makes me think … that .. that you …” Ethan mumbled, dancing around the words he was afraid to say. 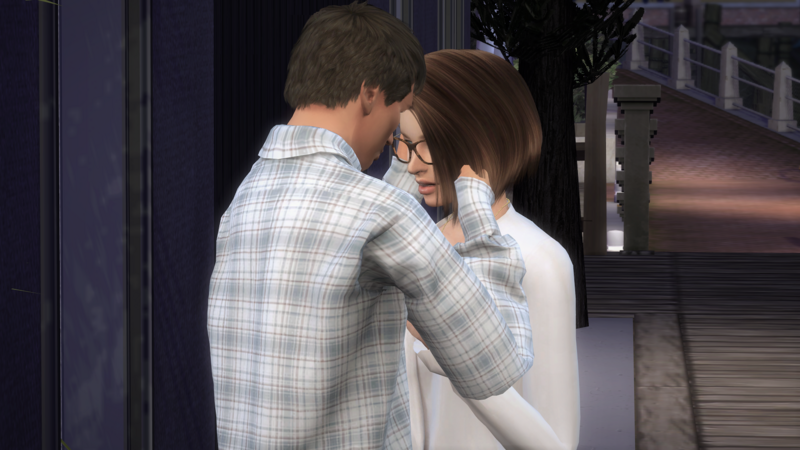 “Can we go to your place? Grandma has a caretaker for the night …we really need to talk.” Grace suggested.
“What about … him?” Ethan asked referring to Alex.
“Never mind Alex. We need to talk. Alone, undisturbed. I am not offering myself up to you, Ethan. But we both deserve to know where we each stand.”
“Okay …”

They went back to the EC Architects building to take Grace’s car, since Ethan lived close enough that he could walk to work, if need be.

The 5 minute drive was wordless, neither spoke as they entered Ethan’s empty house, his son was staying over at Ethan’s aunt & uncle’s for the night. 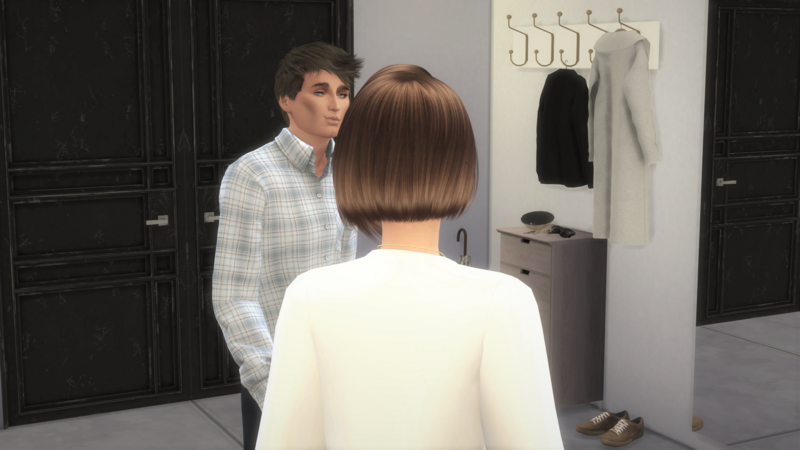 Standing around his entrace way awkwardly at first, until Ethan suggested a beverage. With the wine poured they sat down.

“Who will make the start?” Grace asked.
“I’ll go. Amy called, her baby is not mine.” 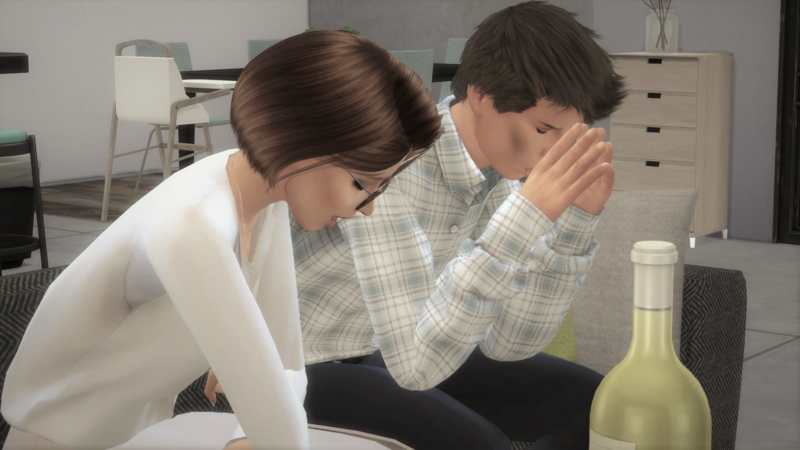 “Great, Ethan, but this is supposed to be about us. I’ll start then. To be blunt, when you came to me that one night, I was heartbroken from seeing you and Blythe together all the time. Even when I came by to talk again the next morning she was here, in YOUR shirt! Whenever we are all together, it seems like you two are meant to be. Anyone who didn’t know you guys’ story would have mistaken you for a couple. To me, it seemed but a matter of time. So I cried through a few nights, sometimes even in the restrooms at work, until I concluded that I needed to move on. Enter Alex. I really like him. He is a sweet man, caring, compassionate – for the most part. And he evidently likes me – a lot.” 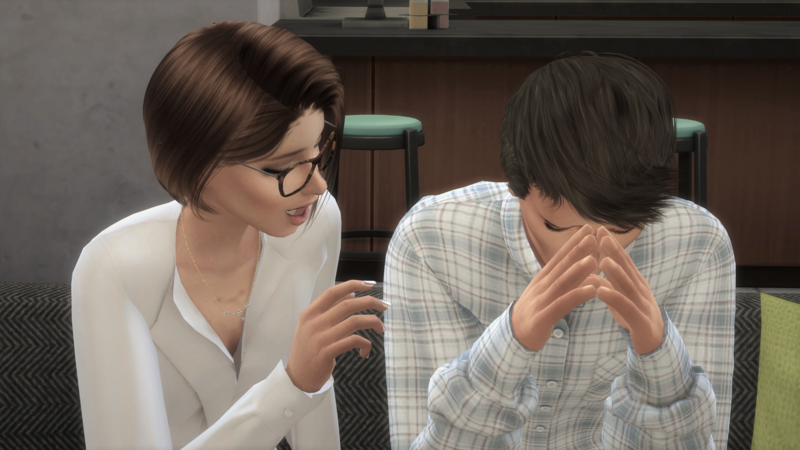 “Do you … love him?” Ethan asked the question he really didn’t want the answer to. 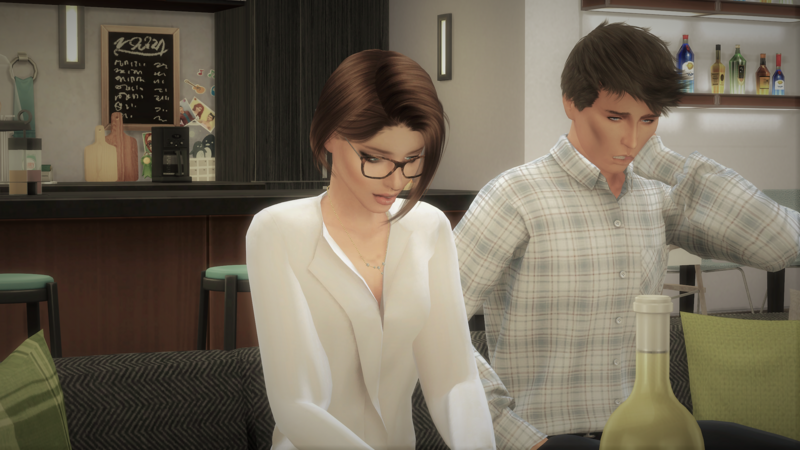 “I don’t know Ethan. I don’t think so. I thought I might have, but he is very … explosive sometimes. Wound very tight and one false move makes him lash out really bad. Afterwards he is all apologies, but does leave an aftertaste.”

“We agreed on truth, remember. I am just being honest. Your turn. What is going on with Blythe and all the others? I saw you talking to this very pregnant lady in the park once, but didn’t want to ask in front of Blake ….” 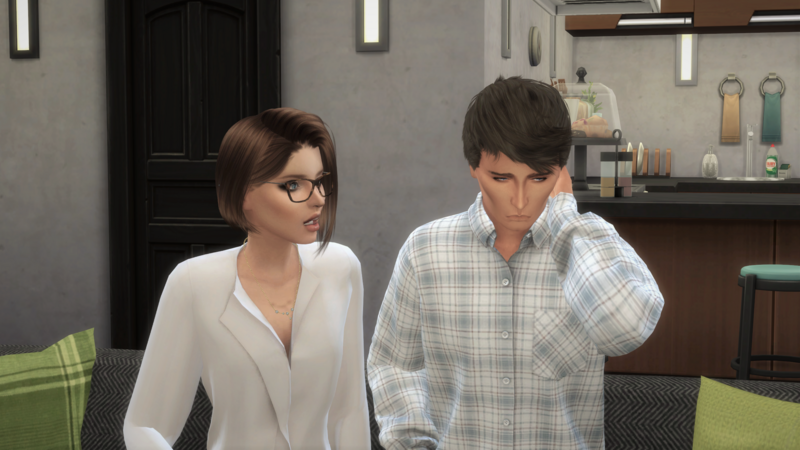 “That was Lana, my personal trainer. And no, that wasn’t me either, although when she texted me asked to meet and walked in that like that, I admit I thought the same thing, but she calmed me down, it’s her ex-boyfriend’s baby. She was only wondering about why I hadn’t been by the gym in a long time and to assure me that it would be platonic from now on. As far as Blythe goes, she and Blair have new neighbors and are going out with them. Blythe is still trying to work through her issues before things get serious. Must be a thing going around with neighbors. No such luck, my neighbors are an elementary school, a high school, my aunt and uncle and parents. My life again. But I have been the epitome of a good boy of late.”

“I cannot believe I am the first to say these words between us, but since I was the last to tell you ‘no’, it seems fair. Ethan, I lov….” 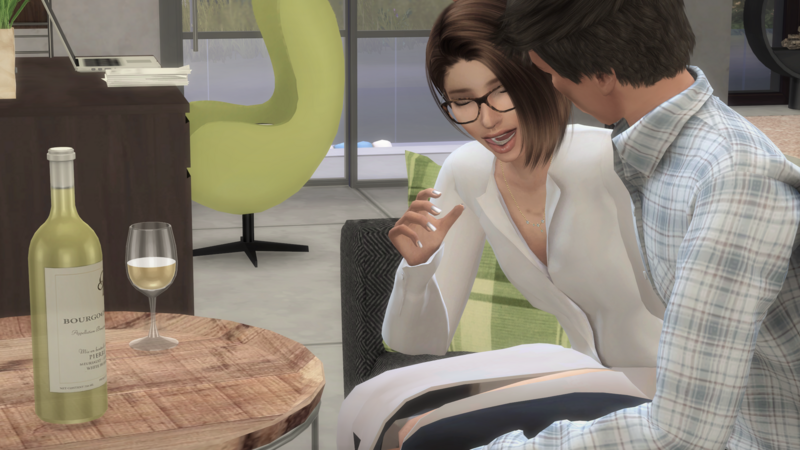 Right into it building up to the ultimate romantic moment, both knowing what Grace was about to say, Ethan was more than ready to hear those words, they were interrupted by loud banging on the door, then Alex’ voice demanding them to open followed by him shouting obscenities.

“I know you are in there, Grace, your car is out front!” Alex’ voice echoed through the closed front door.

“Ethan, don’t!” Grace kept him from jumping up to answer in kind.
“He is going to cause a scene!”
“Please…”

Ethan stayed, eventually the banging stopped. Both breathed a sigh of relief.

“Do you want me to check on your car?”
“I don’t care about my car right now, Ethan. This is impor… waaah!” Grace let out a startled cry, staring at the patio door. 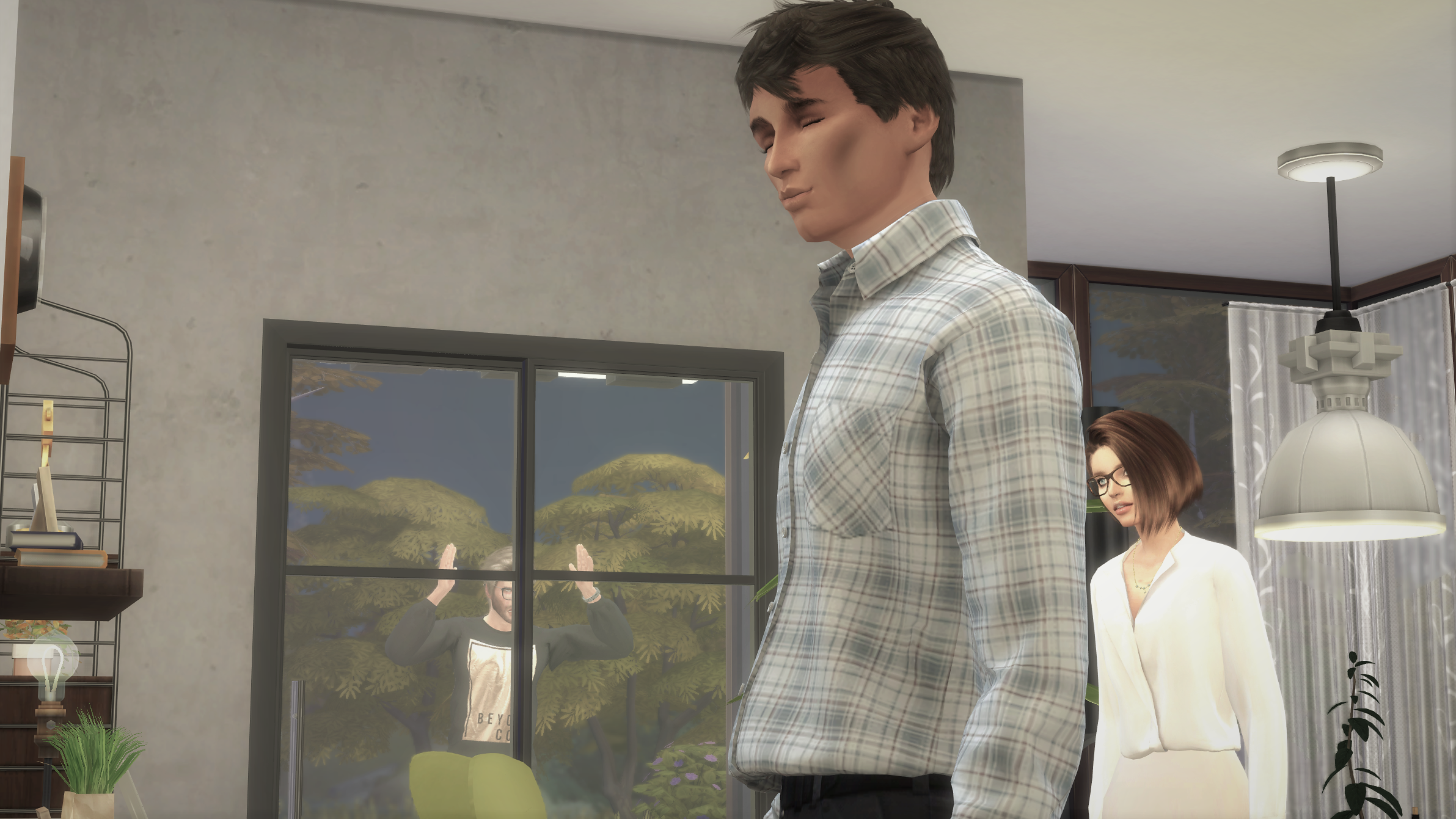 The minute they both heard a noise, startling them, they jumped up when they saw Alex now at the back door as already the sliding glass door to the patio was opened, evidently left unlocked and Alex stood in the room with them, his face an angry mask. 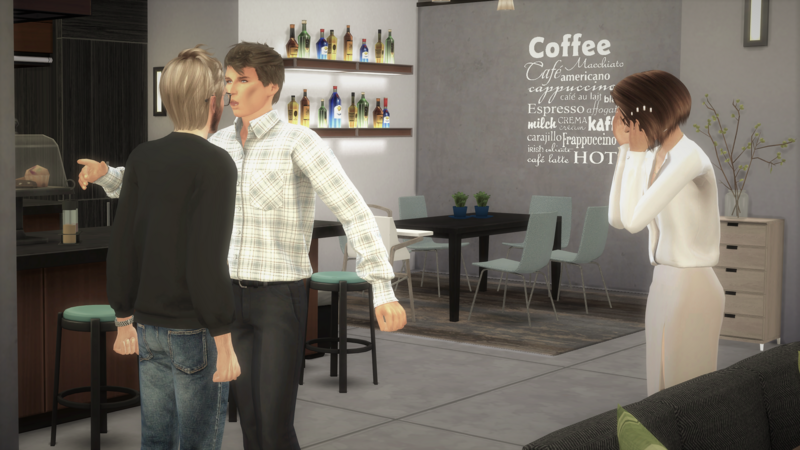 Alex tried to approach Grace, Ethan shielded her. A brawl started, accompanied by a high pitched scream by Grace, who tried unsuccessfully to interfere. 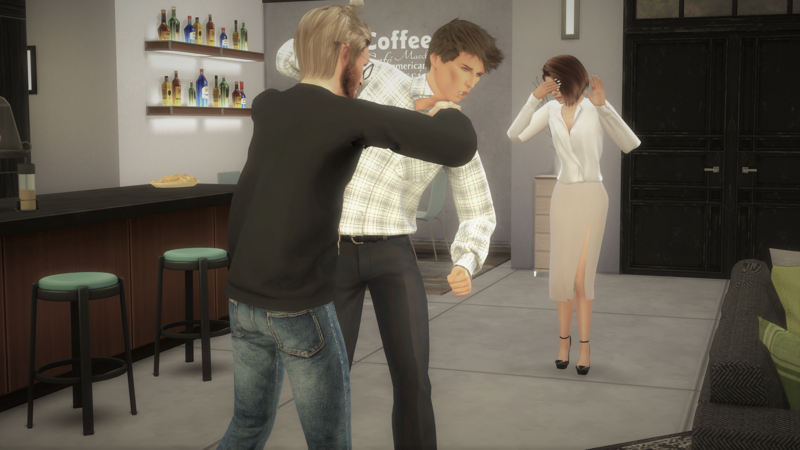 Alex went down to the floor and Ethan kept hammering on him, all the anger and frustration, further fueled by Alex still instigating further in between hits. 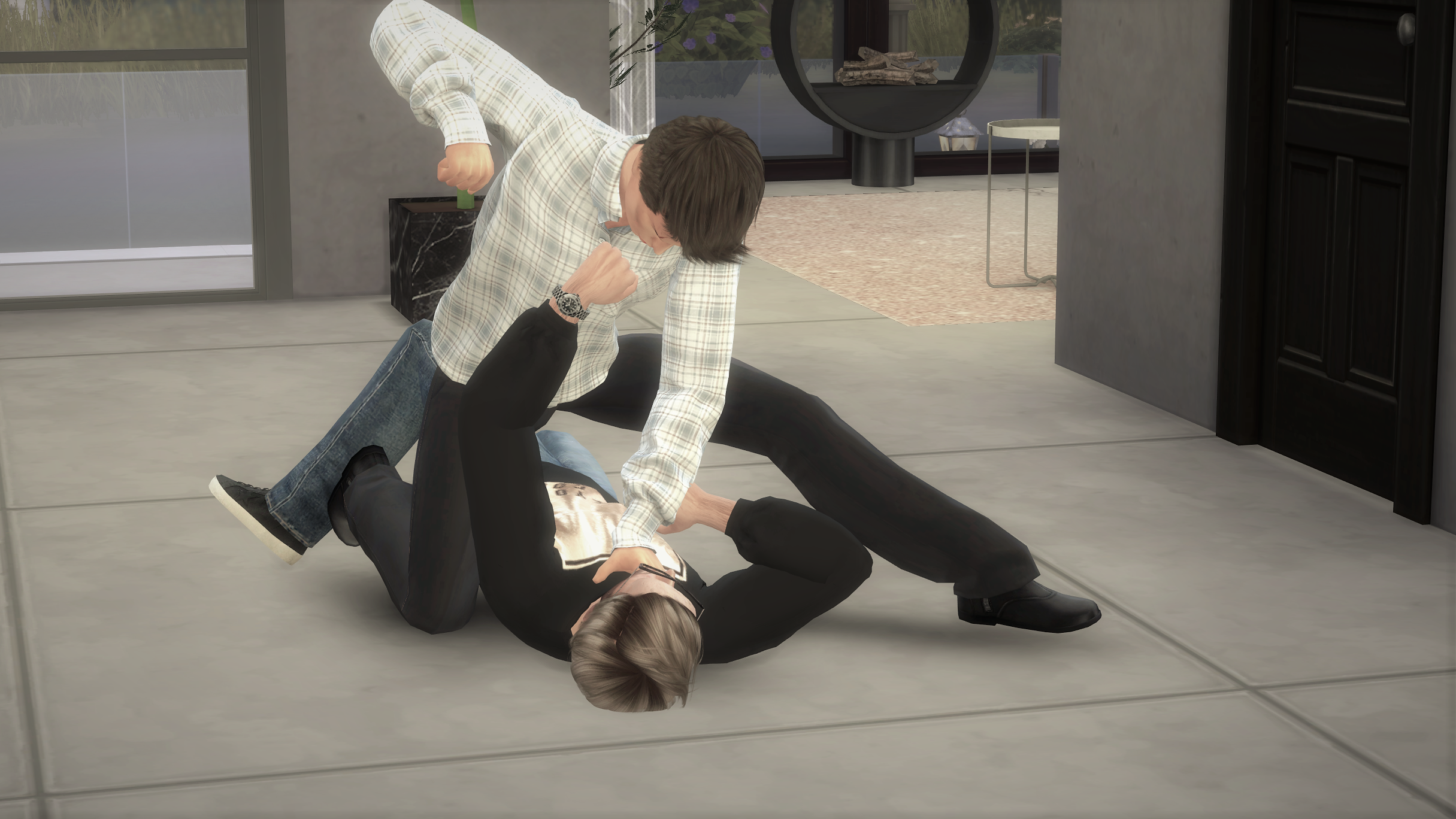 It took a few minutes, the men were still trading punches when two men rushed in, let in by Grace, who instantly went into the brawl, plucking the fighters apart, while lifting Alex back upright. 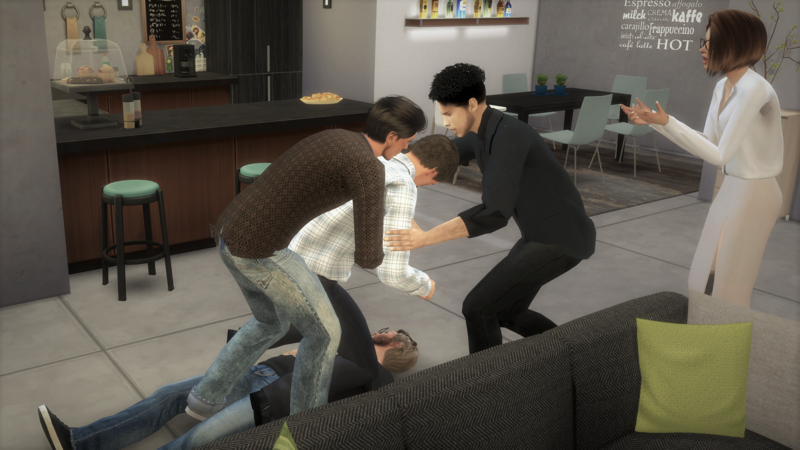 Grace had called in KC and Nick, who luckily lived only minutes away, and both were significantly stronger than Ethan and Alex. 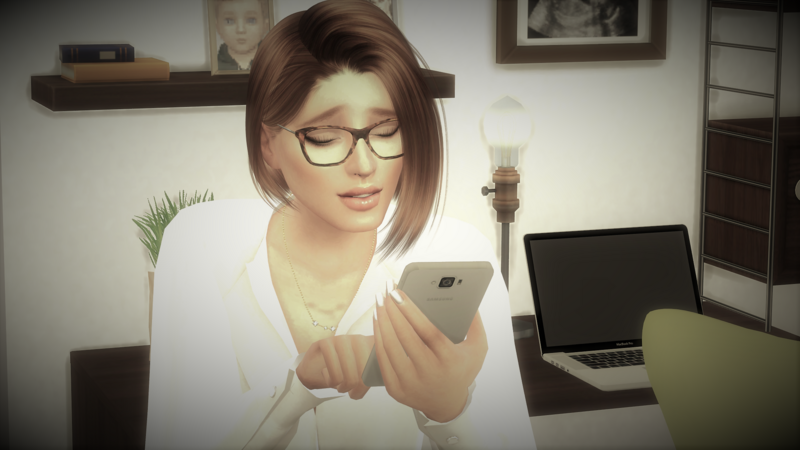 A whirlwind of words ensued, each arguing their case and with each other, until KC had enough. His voice overcasting all the other noise, rendering the intended effect.

“So, for starters. What’s all this about?” KC roared.
“He is a homewrecker and she is a slut!” Alex informed him angrily.
“Ethan!” KC pulled back his son, shooting him warning glances when he tried to go at Alex for his comment.
“You’re a douche! And you’re trespassing, broke into my house, you moron!” Ethan yelled at Alex.

“Ethan, shut the eff up, kid! So I’ll deduce you two came here to – whatever – and you found them and bust in causing all this?” KC continued, his voice upset.
“She is not supposed to be here. She is mine!” Alex barked.
“Yours?! Like hell she is!” Nick snorted a laughed at him. 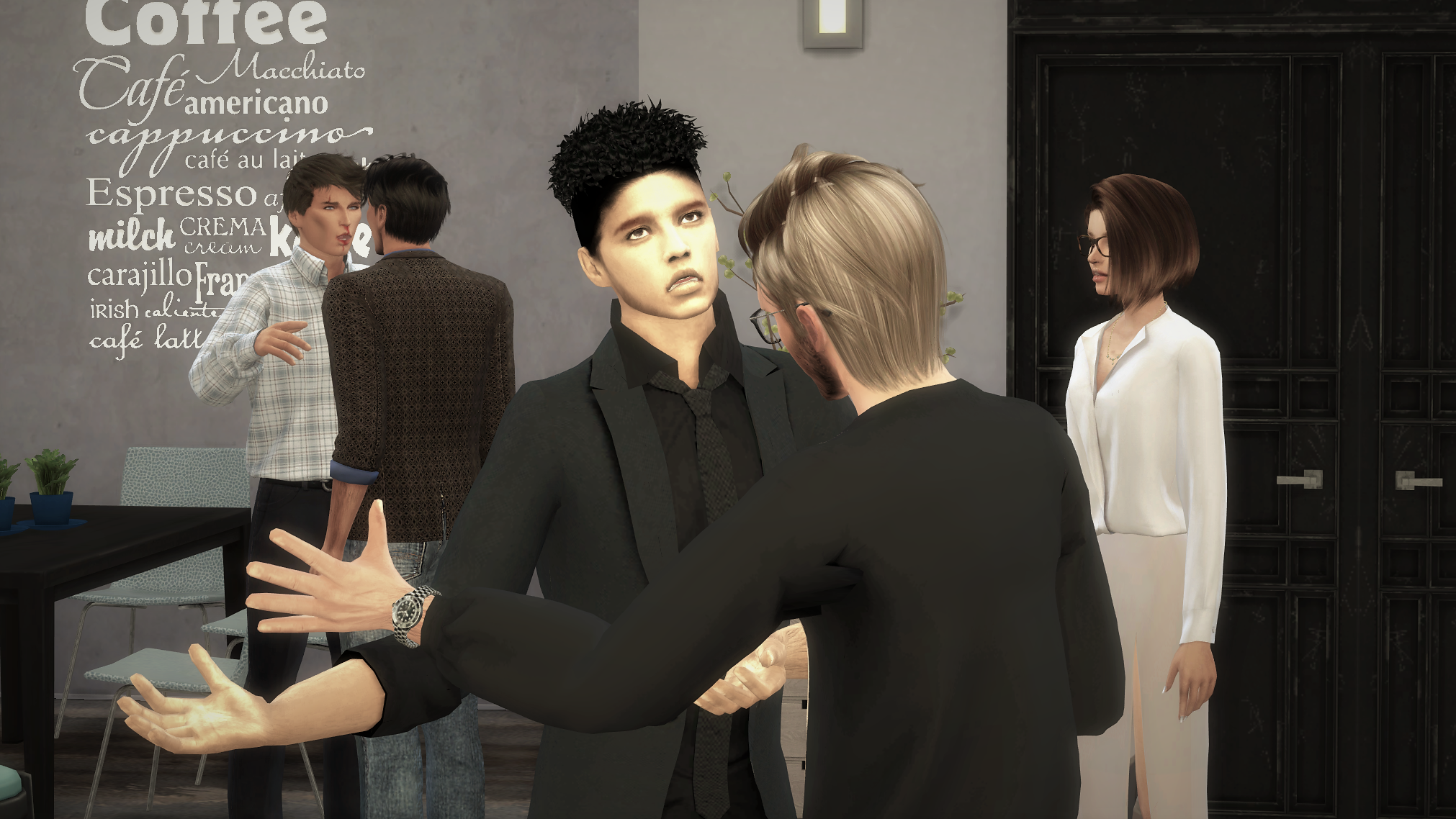 “Nick – I am about to put you outside, kiddo!” KC warned his son-in-law.
“It’s true! He weaseled his way into her life when she was …” Ethan argued.
“Shut up you loser!” Alex chimed in, roweling up Ethan again, so KC and Nick had their hands fulll. 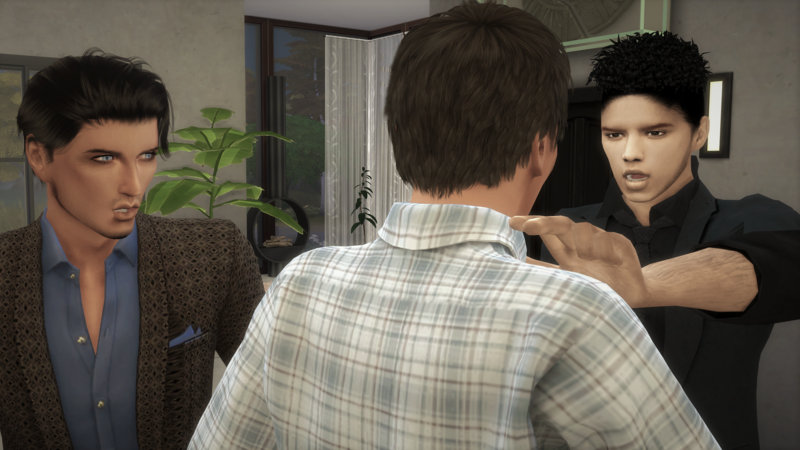 “Ok, before someone sends us to some daytime talk show with this, I am going to do this. You, Alex, are going to go home and steep in where you will go from here. I get it, this is not great for you, but man, it happens. You Grace, do you want to stay or shall Nick drive you home to make sure this one leaves you in peace?”
“I am fine…I’ll stay.”
“In peace? You can HAVE her, that trashy ho! I was good enough to fill the void but now she crawls back to you. I am done, Grace! DONE!” 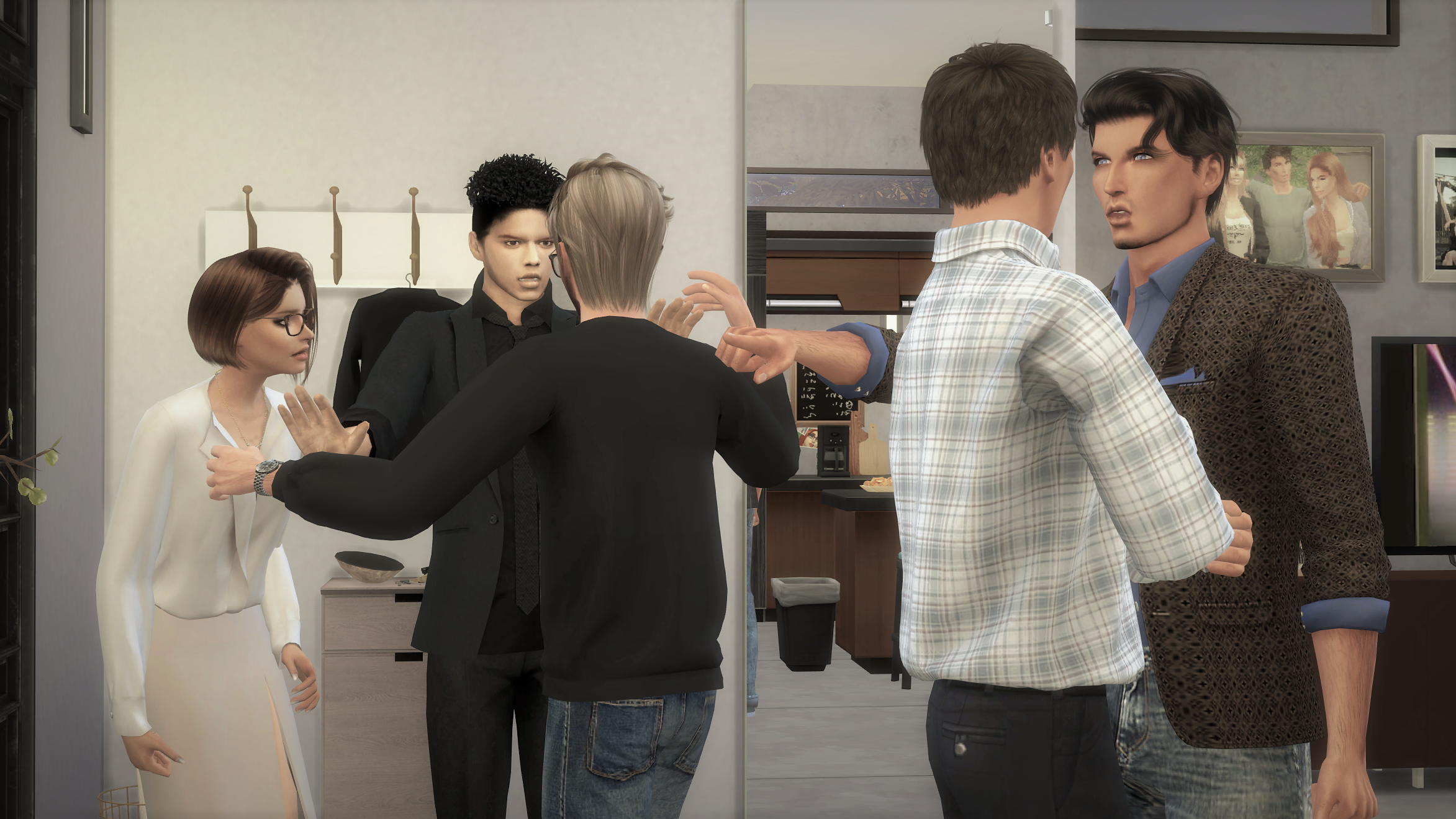 Alex broke away from Nick, rushed out, slamming the door hard. 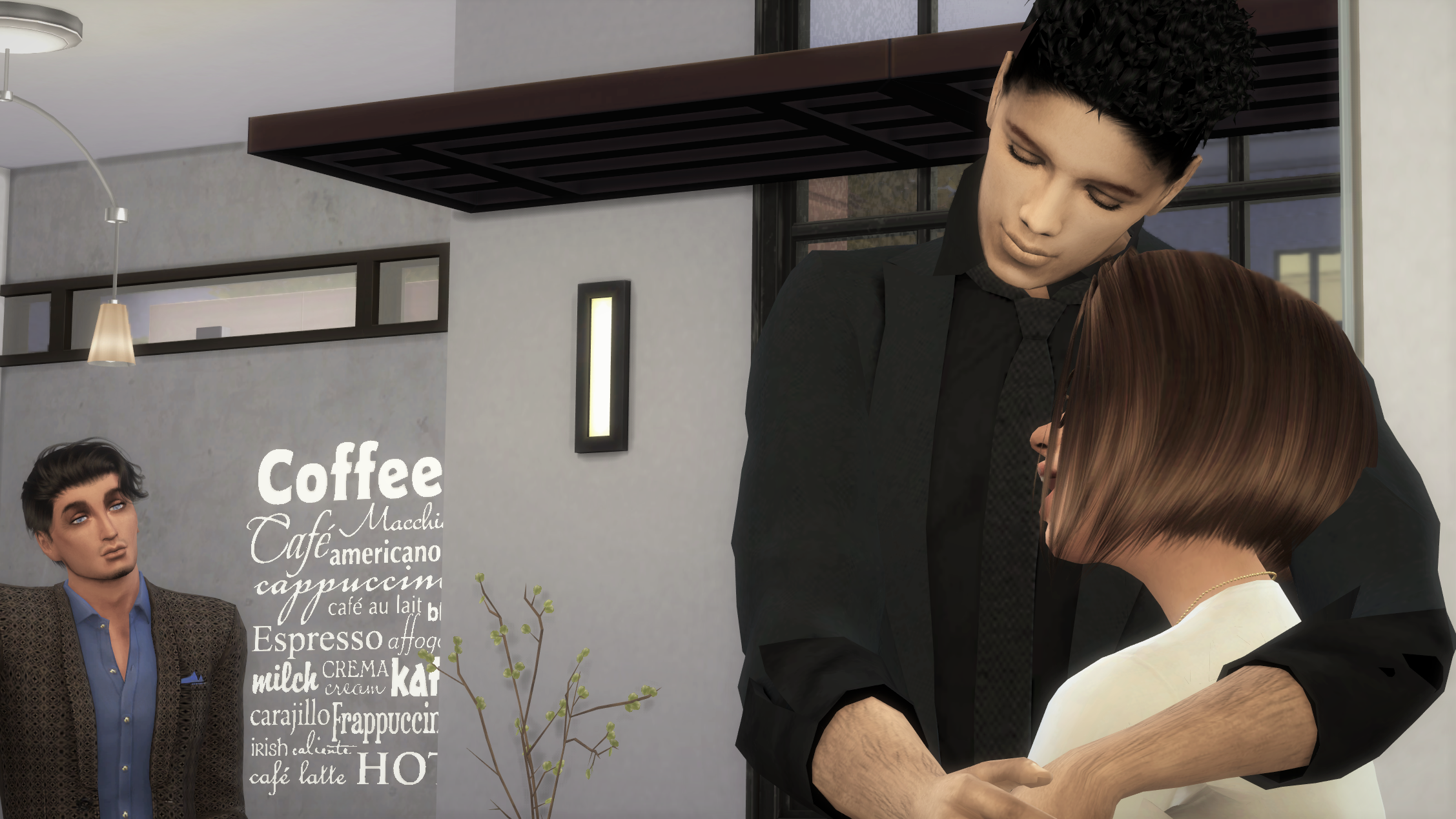 Alone in the bathroom, KC went about cleaning up his son’s blood-stained face. 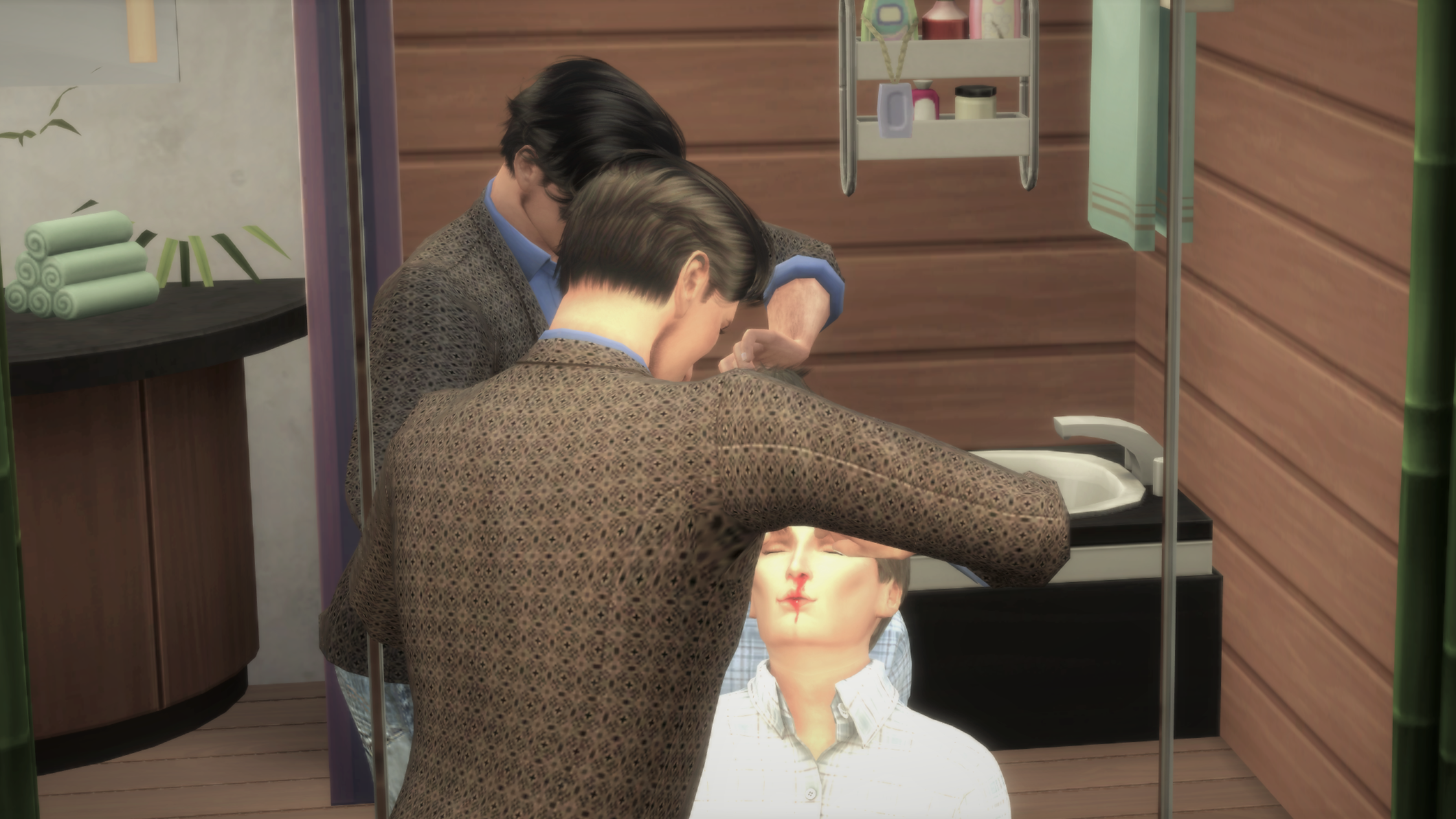 “So what is this really about, kid? I thought you said you were done with female drama.”
KC asked in the midst of his efforts, as Ethan winced.
“I am. Was. At Nick’s party, she … asked to talk. Alone. So we came here and talked. Just to talk, I swear …. OUCH, dad!” 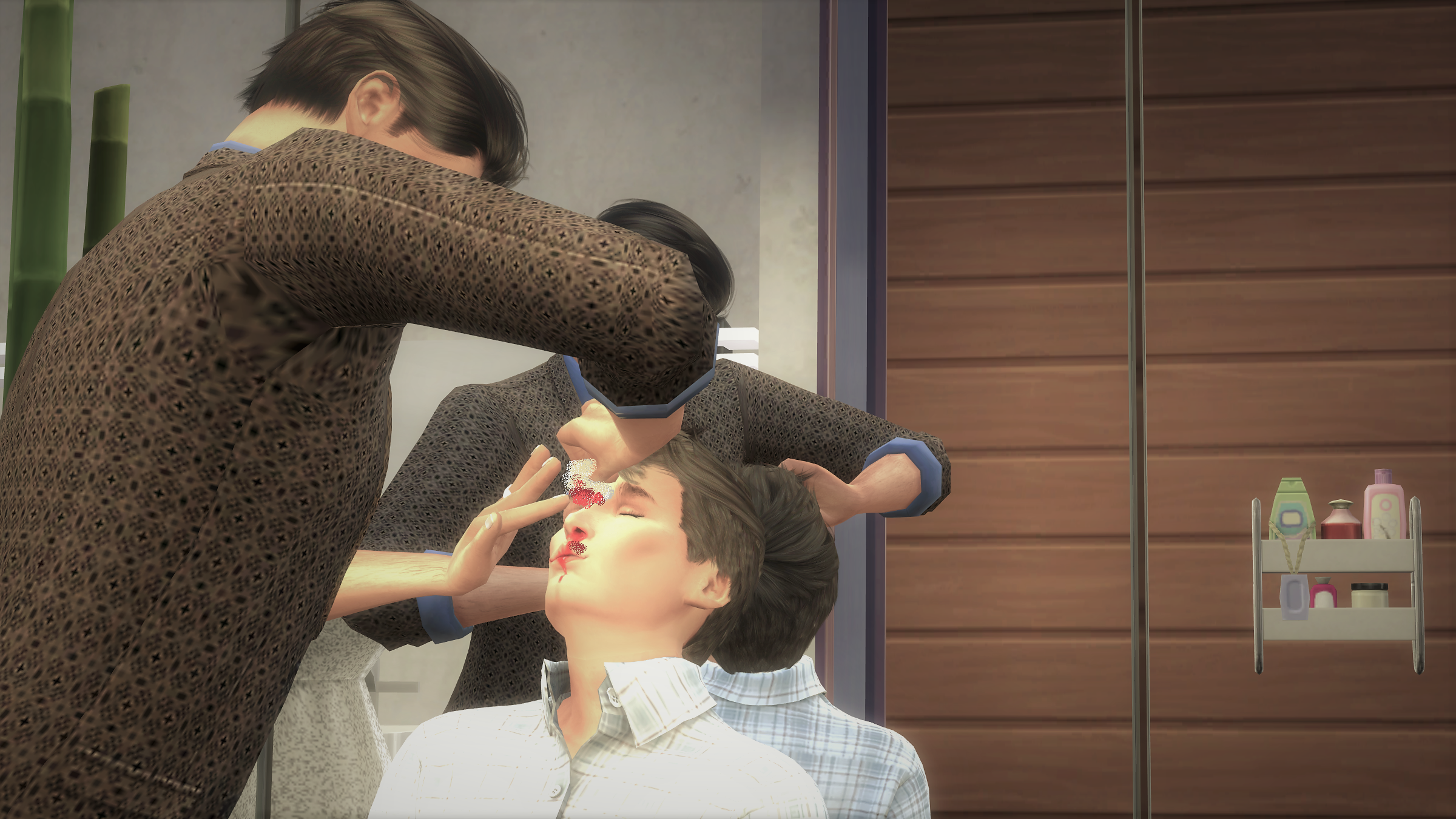 “You wanna brawl, you need to toughen up. And talk? Do I look like a wallflower to you? Talk? After your interpretation of ‘Dirty Dancing’ at Nick’s party … come on now son. You cannot possibly think I am that naive.” 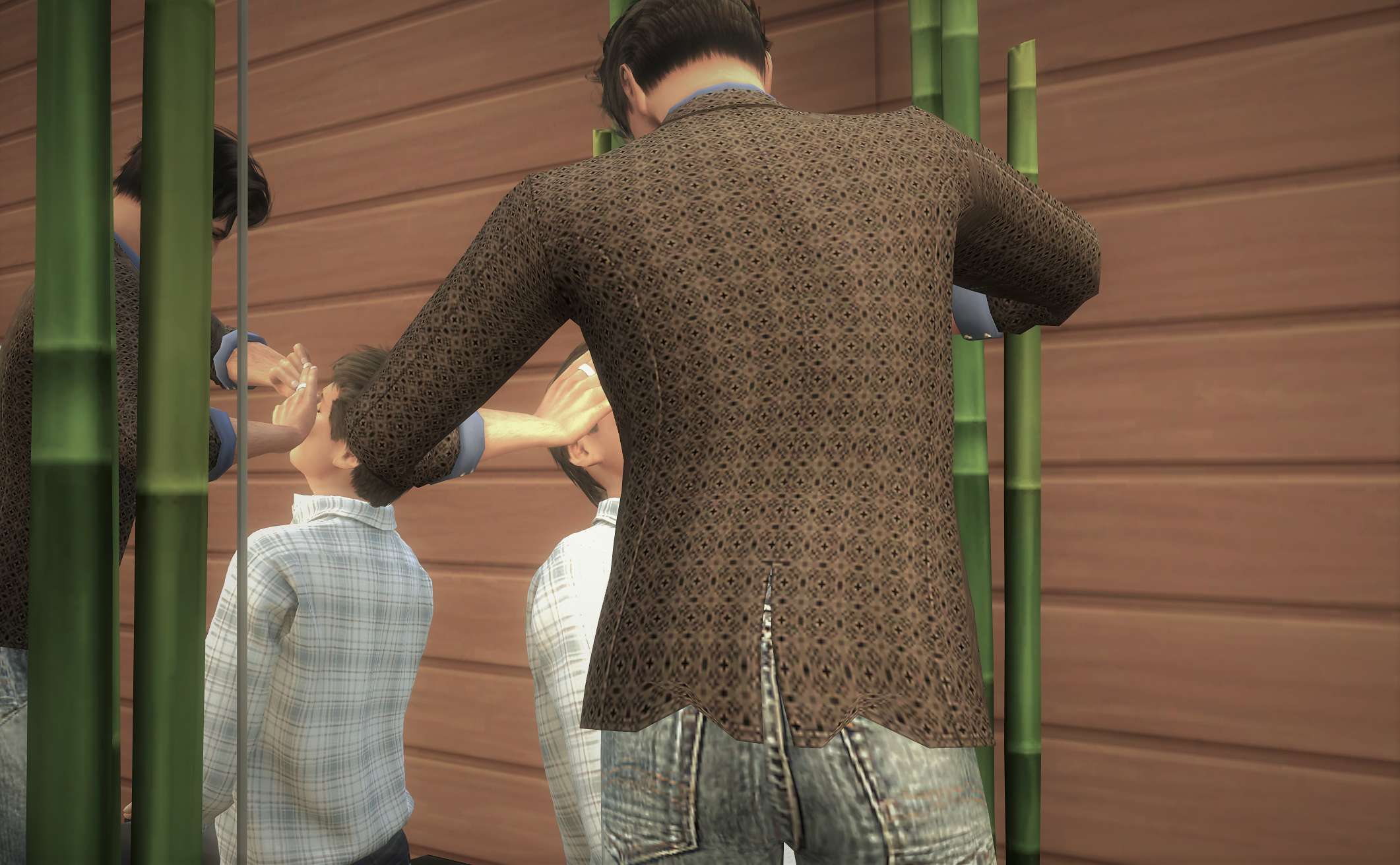 “Fine. She may have kissed me at the party. And I took her here hoping that …”
“That what? Another night bringing you nothing but more heartache?”
“She was about to tell me that she …” KC shook his head, which stopped Ethan’s rant,, while both men now relocated towards the sink finishing the task, while talking. 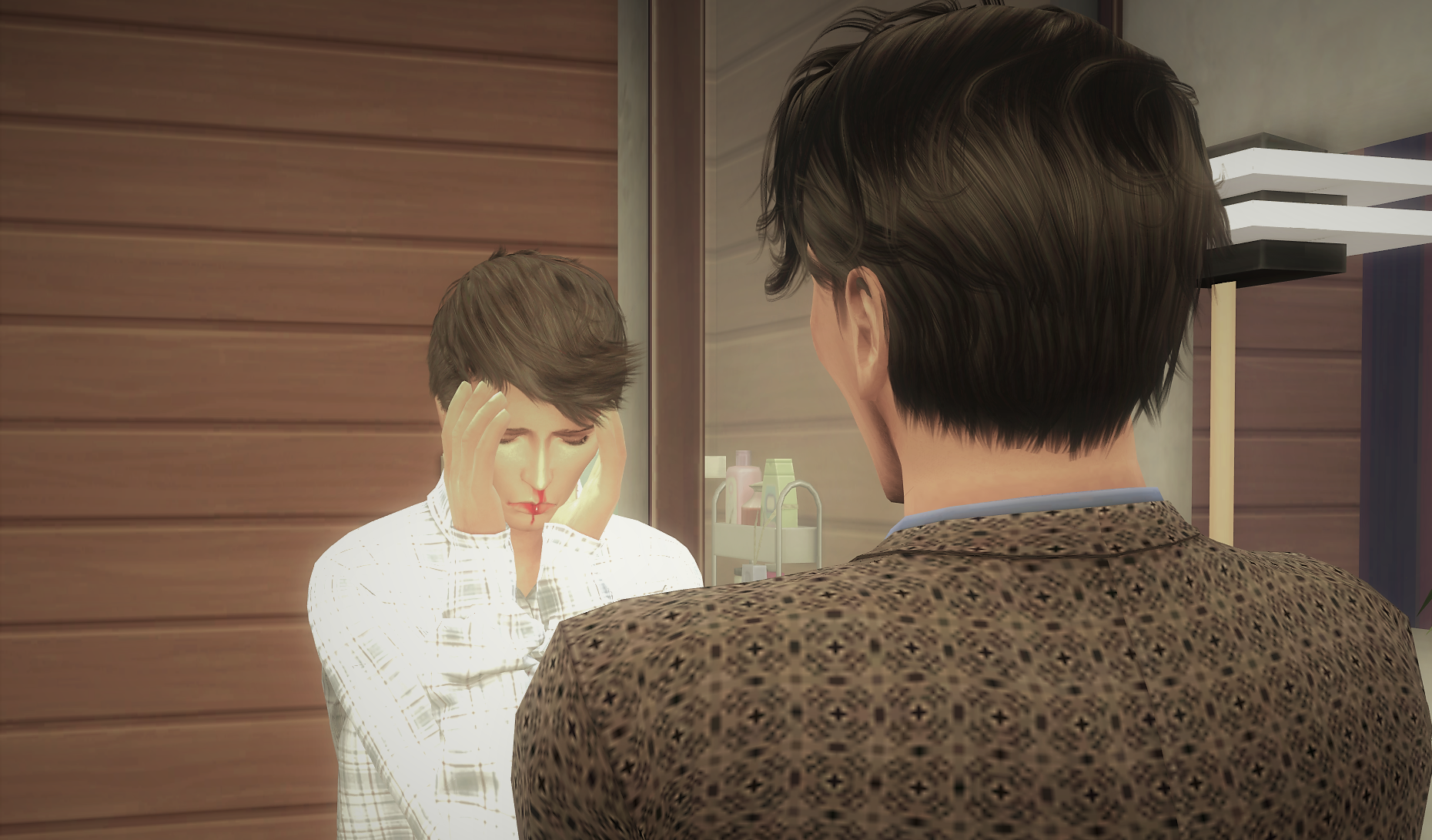 “Oh, I know what she was going to say. And what you were going to reply. And where all this would have lead. That Alex did you two a favor. This is not how this needs to go. Grace is a sweet gal, but you both are idiots if you thought talking about feelings and then ending the night in the bedroom would have fixed a thing. She didn’t even have a clean cut from Alex until just minutes ago. However she feels about him and you, for all we knew, she still was in a relationship when you two came here. That is the exact recipe for the messes you need to not get involved in anymore, kid. So what’s the big plan here, huh?” 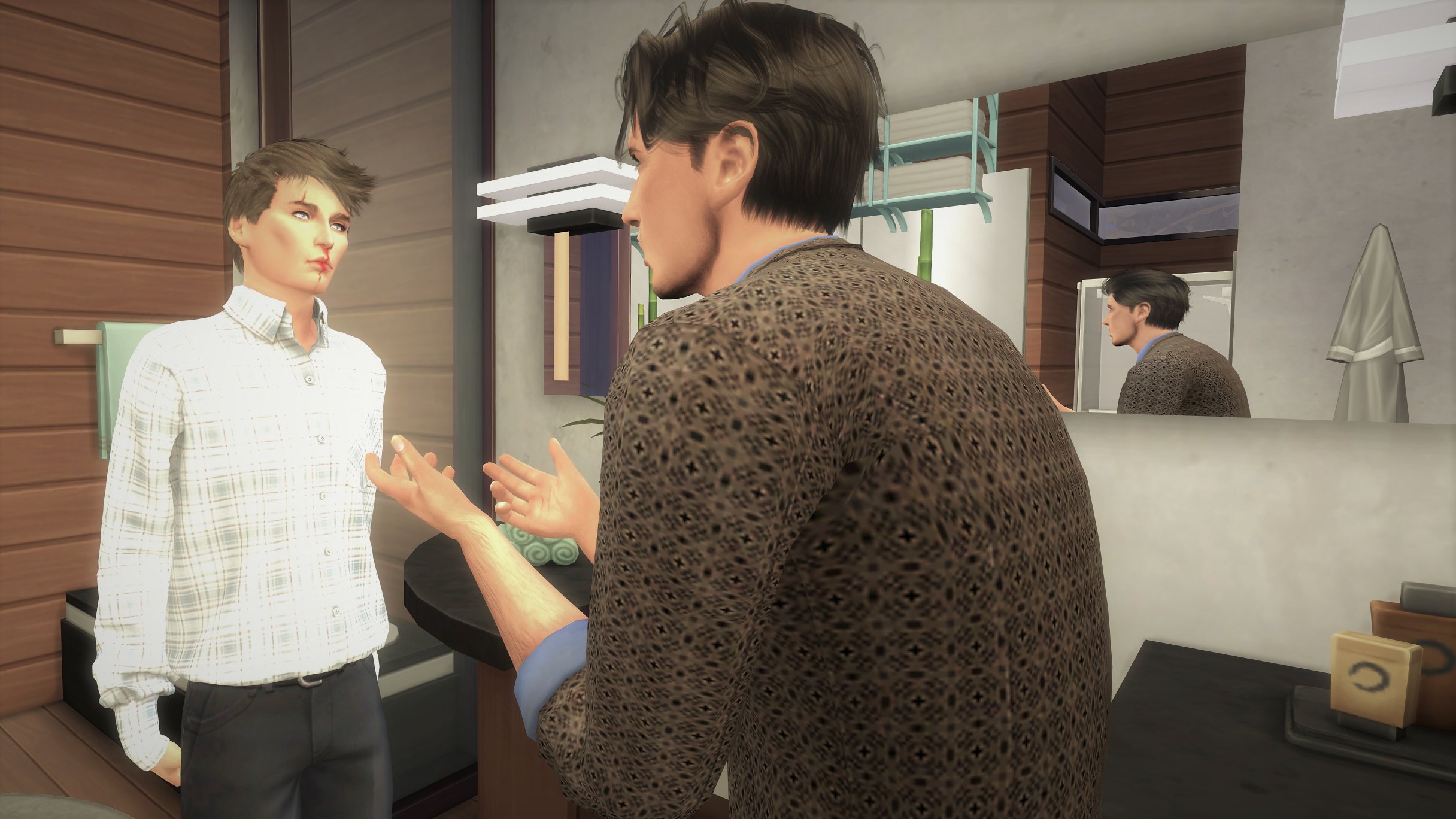 “Dad…”
“Yeah dad .. what? Trust me son, I can hardly believe the words coming from me, but I am not saying don’t try with Grace, by God everybody has been seeing this coming and we are all rooting for you two, but do what you said in your mother and my living room a dozen times by now, put your money where your mouth is and learn from your mistakes. Take it slow. For both your sake.” 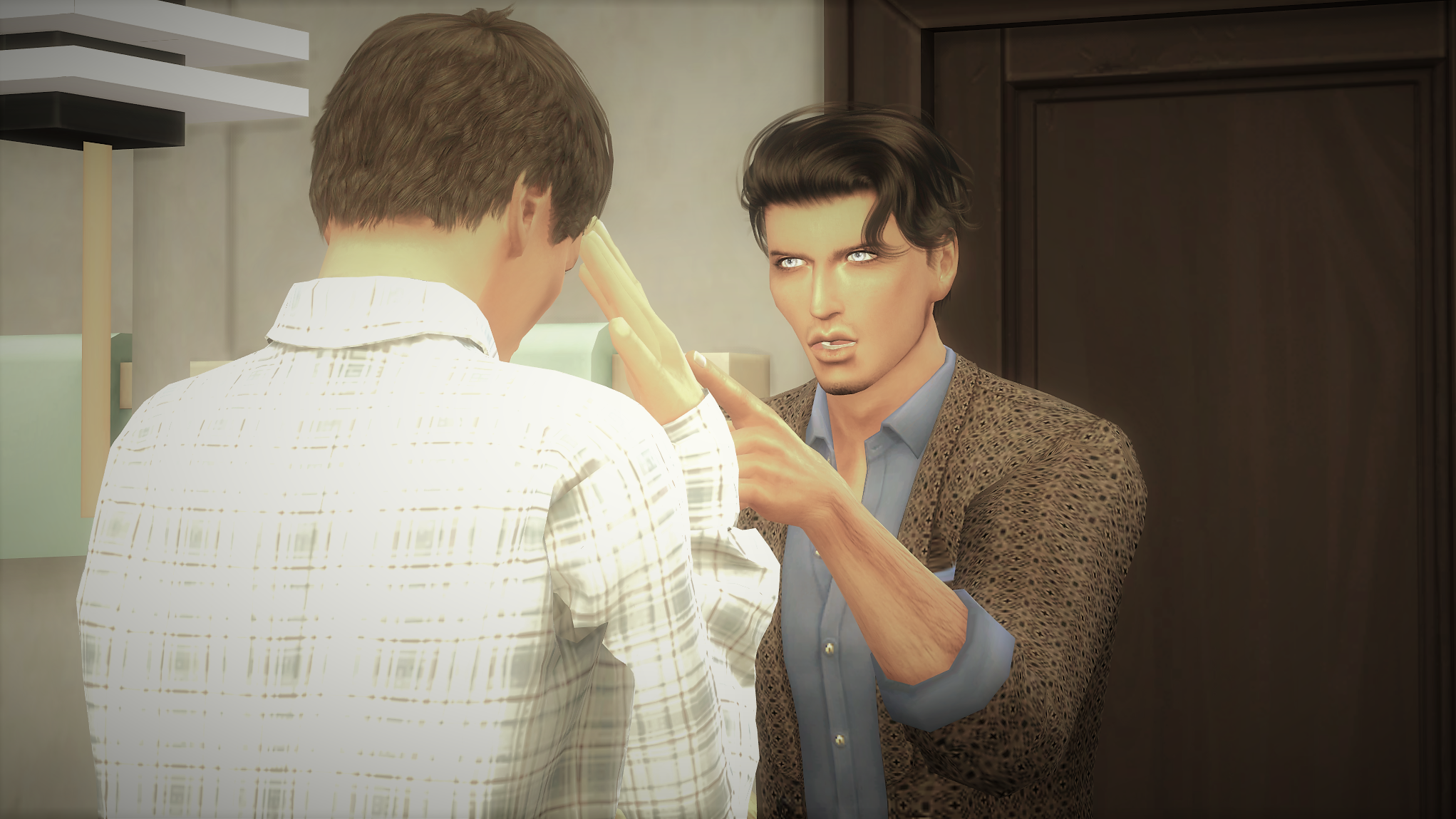 “Slow? How much slower?”
“How many dates have you and Grace been on. Actual dates, not something at work or with the other friends of yours. When is her birthday? Favorite music, flower, book … anything …? Yeah, you want to date first. See if you really fit. Lust is easy, son, love is hard. Worth it in the end, but not easy.” 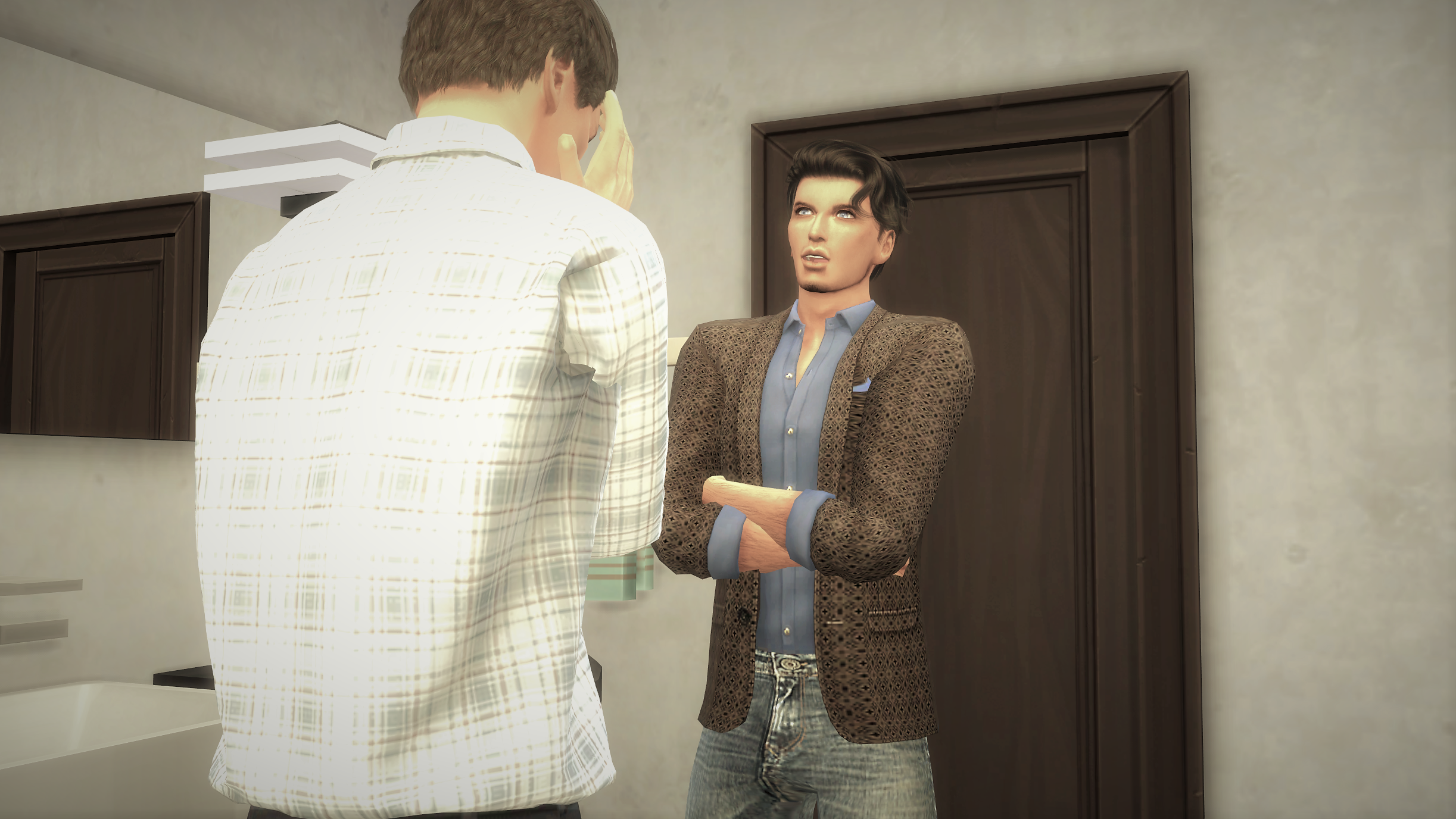 Ethan nodded. He knew his dad meant well. And that he was right. No sense rushing into it just because both took detours.

“Thanks dad. Oh, and I know I don’t say this enough, but … thank you for everything. Love you, dad.” 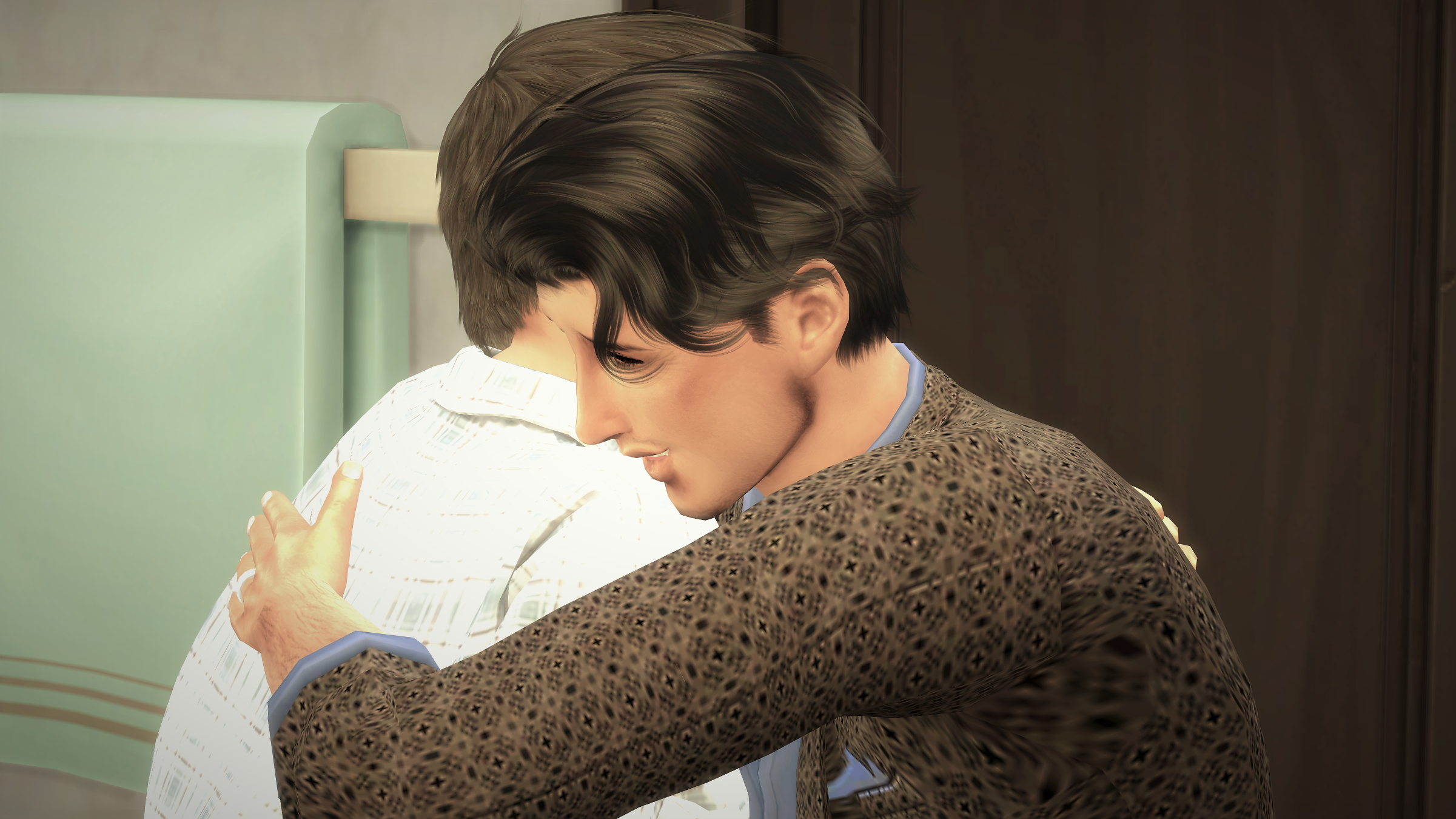 “No need to say it, kid. Love you too, son! But I really need you to remember this and do it right this time.”

The evening ended with all of them in there own beds at their own homes.