Nothing is more wretched than the mind of a man conscious of guilt.
~Plautus

Ethan pushed open the front door to his home and immediately Grace came into view, looking somewhere between worried, relieved and very upset, and right away laid into him.

“Where were you?! I left you three messages! Do you know what time it is?! Look at you! Have you been drinking? You sure have! You smell like a refinery. Don’t tell me you drove your car like this!” Grace looked at him, appalled after smelling him, frowning. 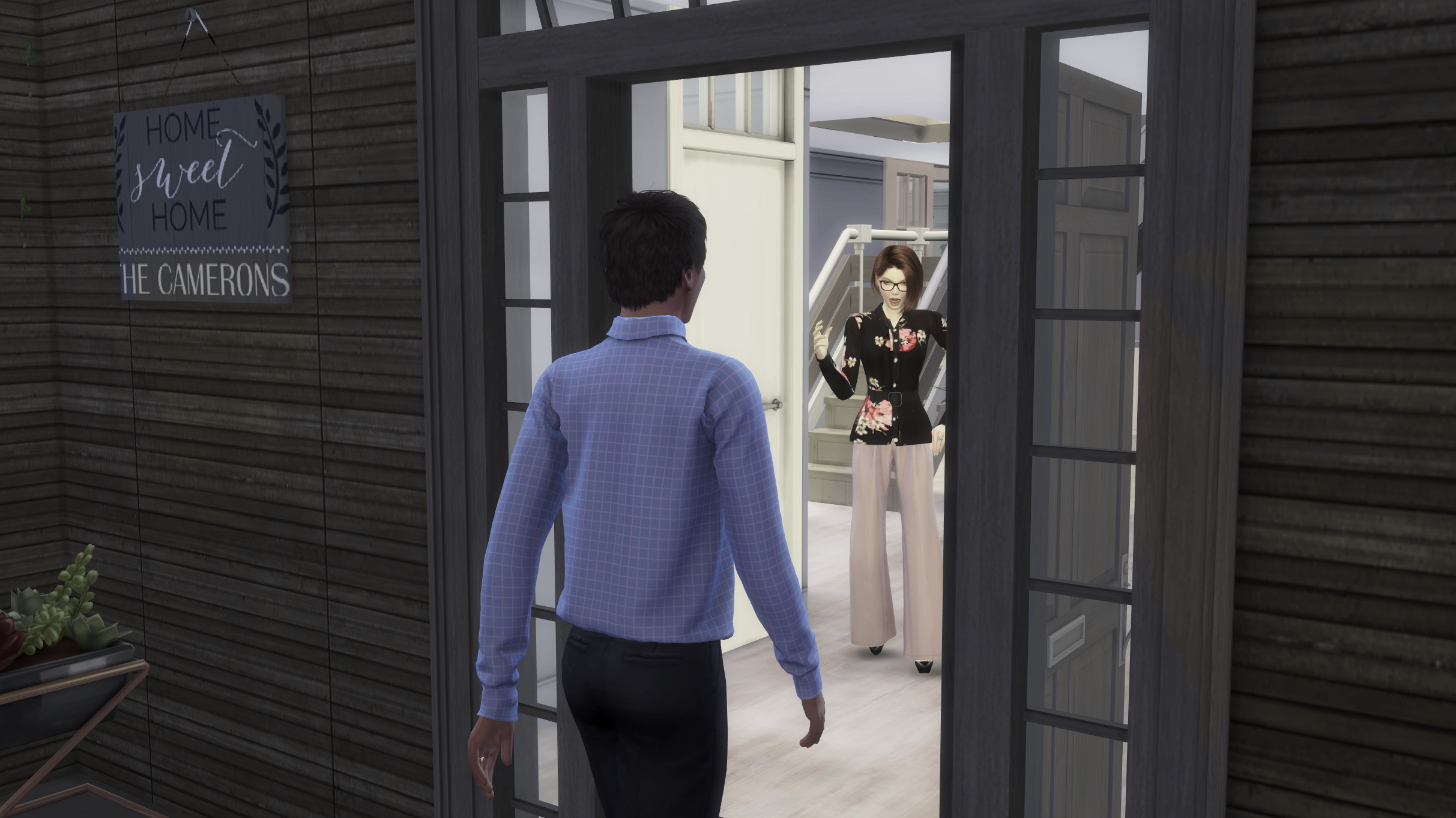 “I had a drink with Nick after work. Needed to blow off some steam. That client meeting was torture.” The lie came off Ethan’s lips way too easy and before he knew it. His mind was still clouded from the effects of the alcohol, the stress of the night, his guilt about his infidelity. He faked a smile but could not look Grace into the eye. 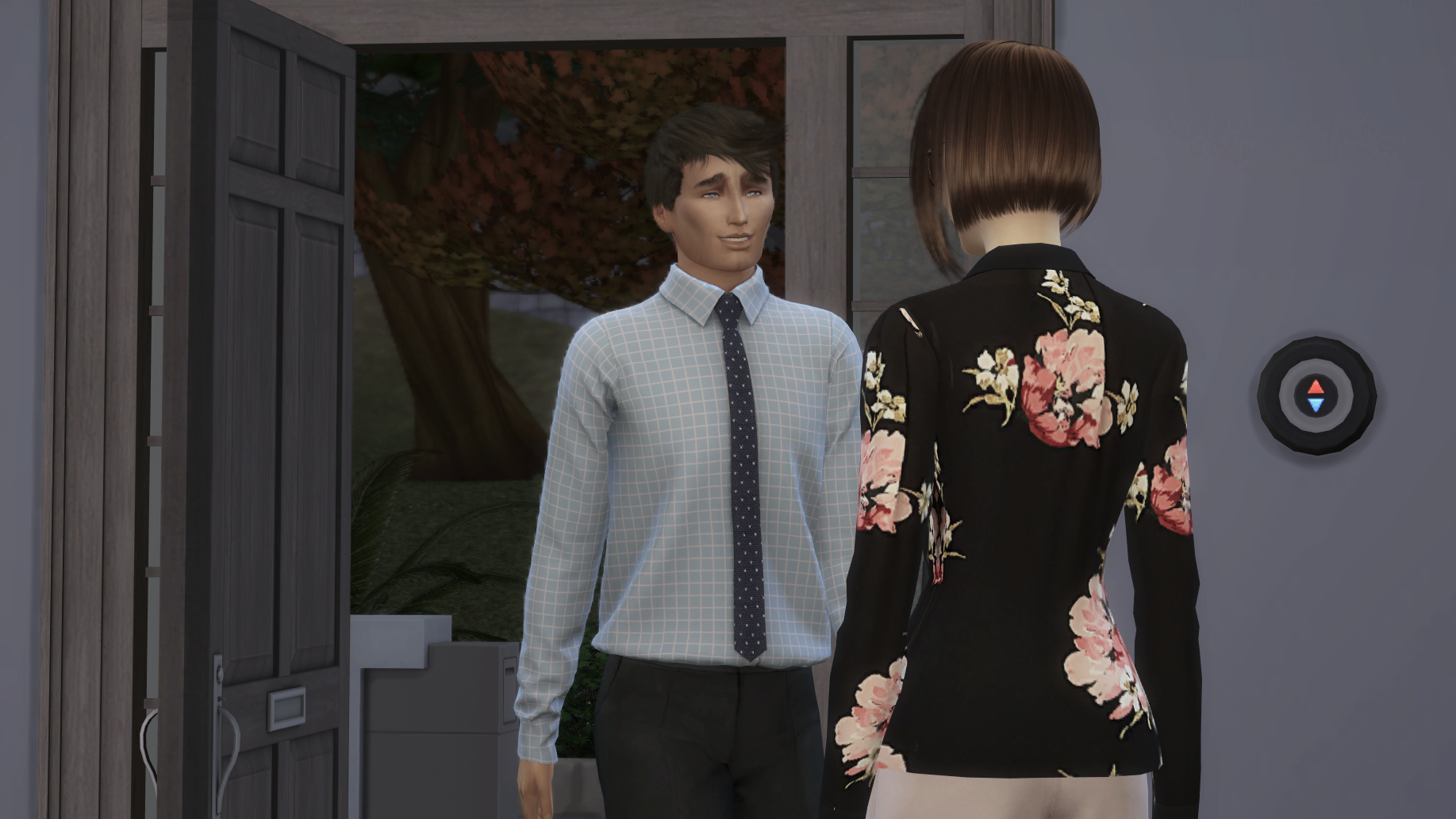 “You are a mess, Ethan. Your shirt reeks! Did you have to go let loose in one of your good dress shirts? That one is the pits to clean because of the silk content… I am not doing it. It’s going to the dry cleaners!” Grace’s nagging was like a million little needles into Ethan’s brain, seemed unnaturally shrill, probably the aftermaths of the amounts of alcohol wearing off.

“Sorry. I’ll go take a shower and will hang the shirt up there so the steam from the shower can freshen it up some. I’ll be right back down. Where’s Eli?” Ethan said mechanically, trying to control his fight or flight instinct. 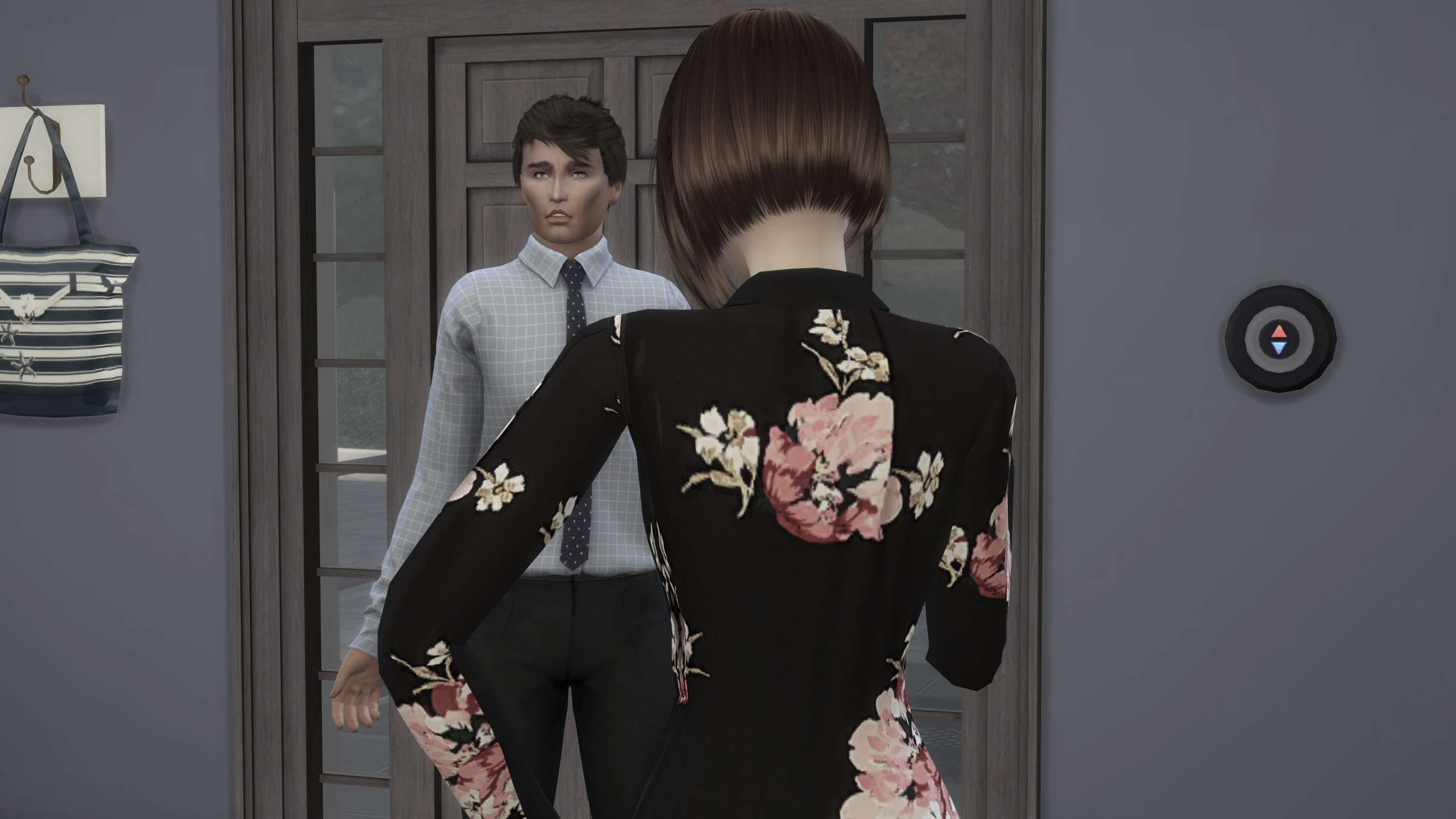 “Your son called earlier, is staying overnight at Parker’s. My son is doing well too, thank you for asking.” Grace was clearly out for combat.  Her son Cory and the entire situation surrounding him had been a bone of contention between them since they first got married. VERY sore subject and once it came up, it never ended well, so Ethan wouldn’t touch that subject with a 10 foot pole on a good day, let alone tonight.

“Thank God. I mean, good for both of them.” Ethan was relieved about not having to face his son tonight. He felt humiliated by his own actions, and like a failure, not like a proper father figure.

He hurried upstairs to shower. 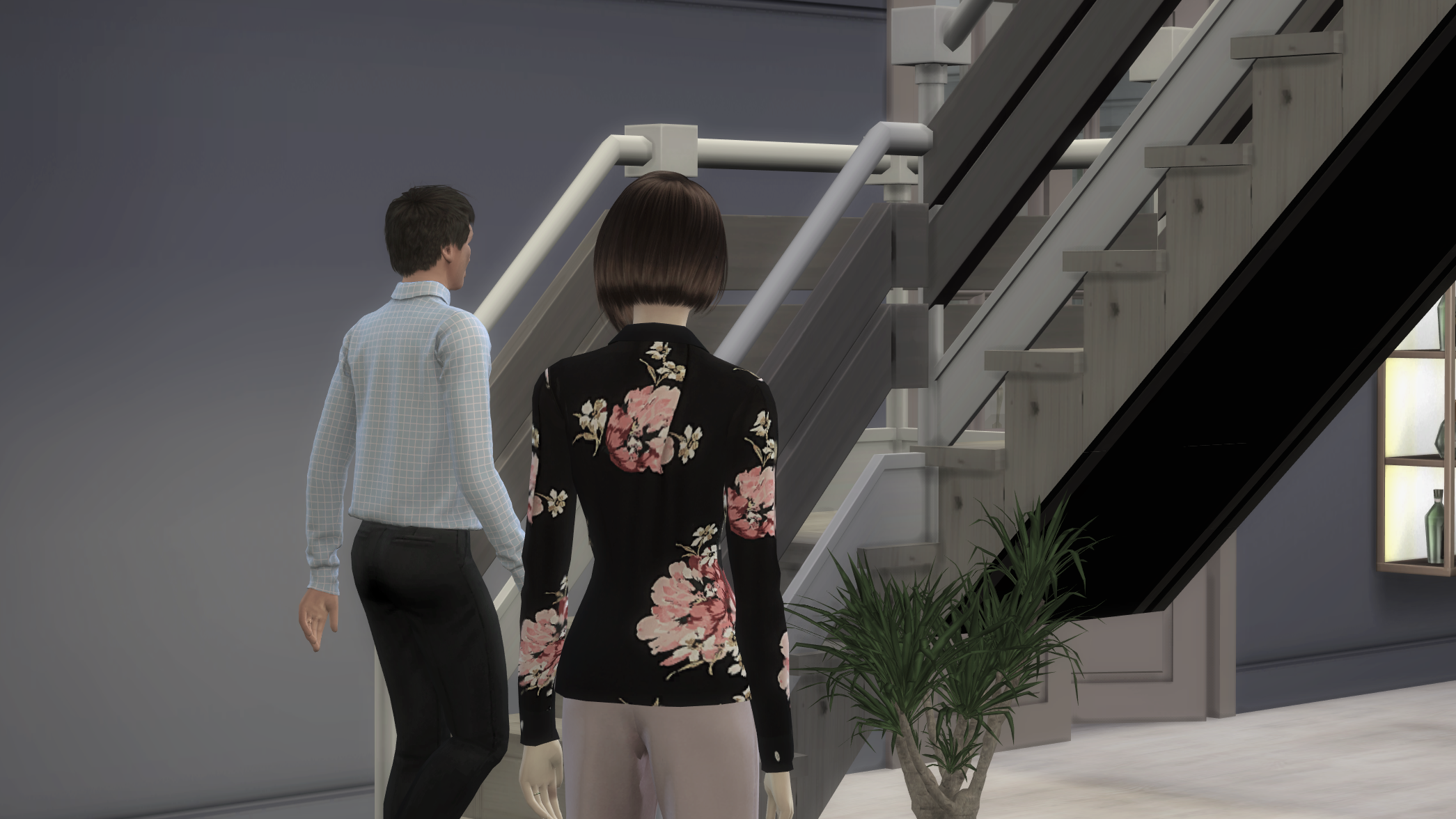 Grace’s looks were burning holes into his back. It felt as if she already knew. But she couldn’t. No way.

Keep your head on straight, Cameron! Don’t freak out now and it will all be all right again! Eventually. Maybe.

Ethan reprimanded himself in his mind. Still it felt like he was trying to go upstairs on a downstairs escalator made of molten lava. 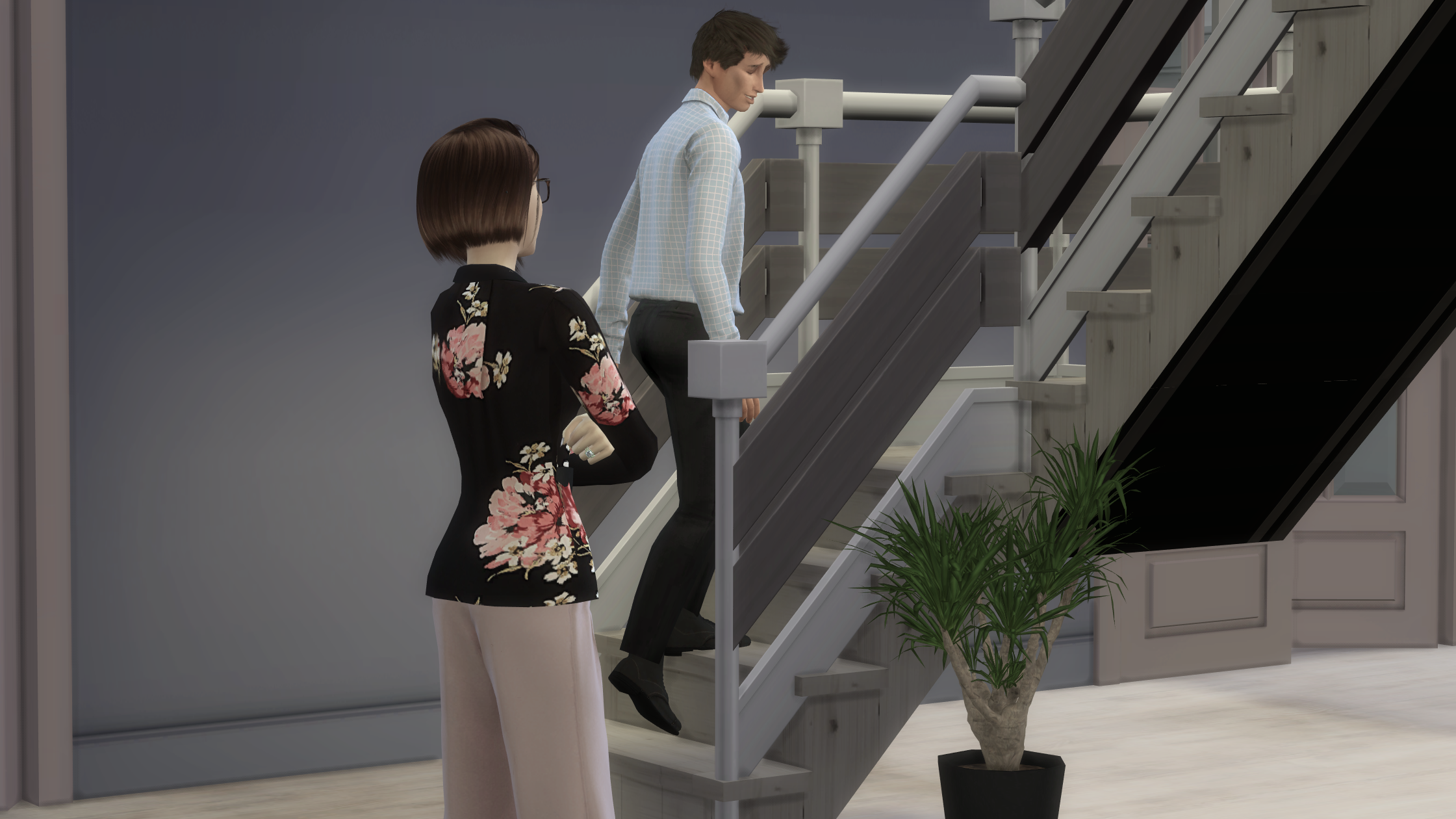 It would become the longest shower he had probably ever taken, but even that couldn’t wash off the guilt, no matter how much he scrubbed. What had he done?! How could this have happened?! If Grace ever found out … 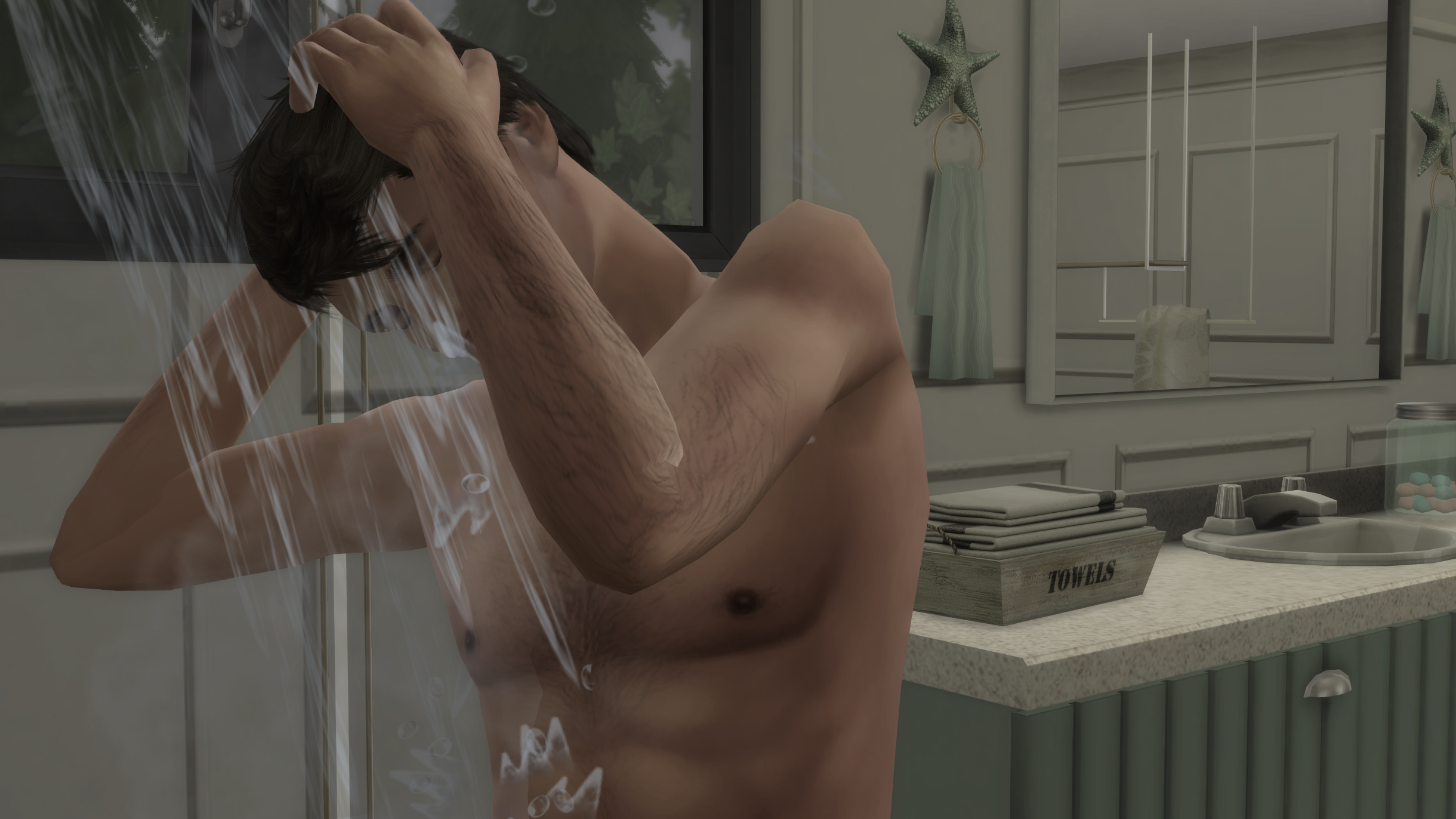 Finally he realized that using up the water reserves of the entire region would not undo what he had done, and that he could not avoid facing Grace forever, so he dried off, put on comfy clothes and went back downstairs, where he heard voices.

He followed them to the dining room, heard laughter, then saw Grace and Nick, his friend finishing up some funny story as they both saw Ethan. 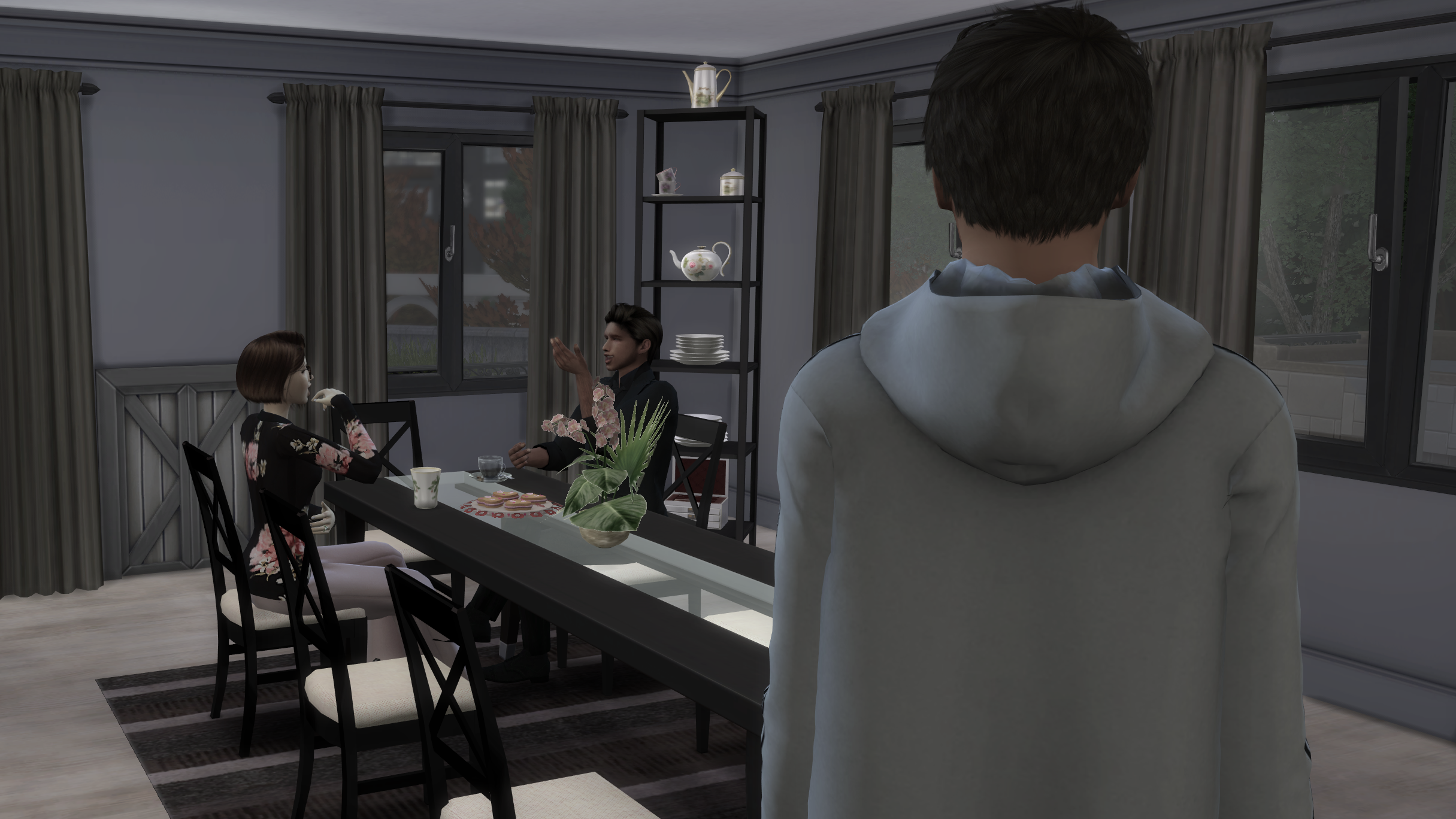 “There he is! Dude, I have to tell you some fucked up shit that happened today at work.” Nick chuckled. 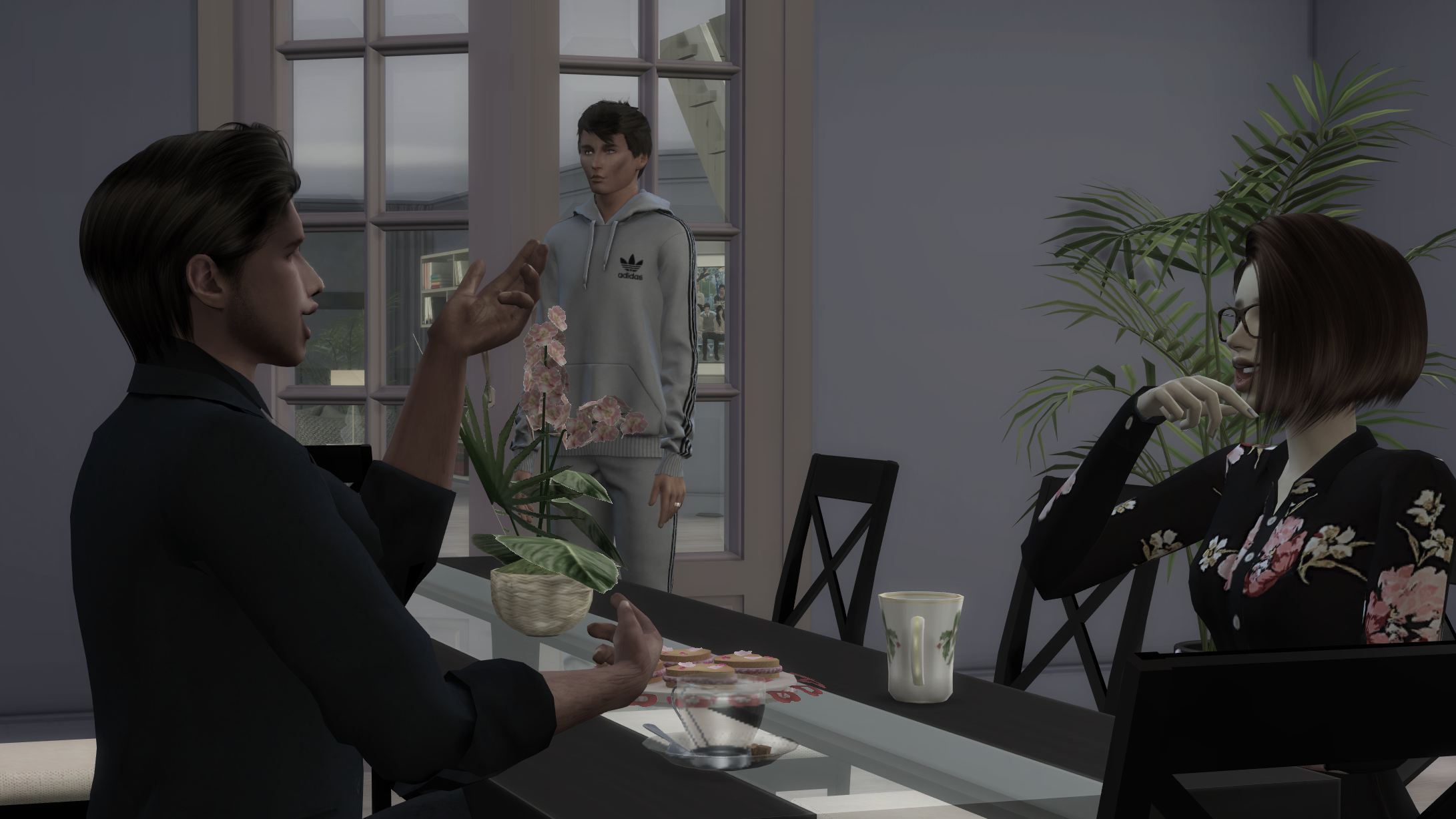 “Why didn’t you tell him earlier today, Nick? Or were you too busy drinking up the reserves of the bar?” Grace was very obviously testing the waters. She had already figured out that something was up. Ethan could tell, Nick couldn’t.

“Do what?” Nick chuckled puzzled, trying to figure out what he assumed to be a joke. 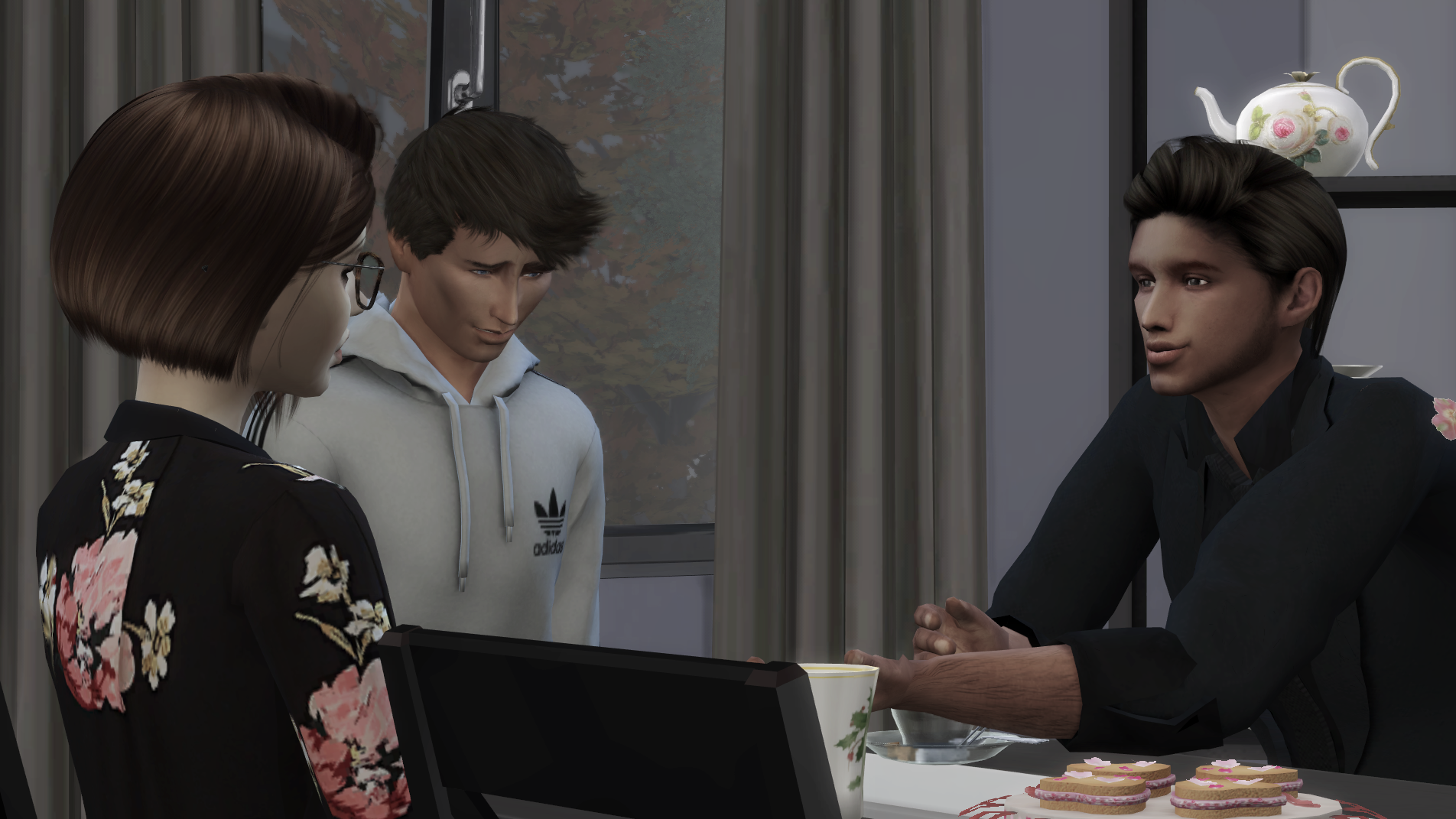 “I just mean, you look great as always, fit and fresh like an April morning, Nick. Ethan surely did not when he got home not even an hour ago.” Grace said, and Ethan could almost see the wheels turning.

“Uh, thanks … and why wouldn’t I be fit? Just a day like every other …” Nick was genuinely lost, looked between Grace and Ethan, now realizing that he had walked into some sort of tension, especially when he briefly noticed Ethan’s idiotic attempt of a smile. 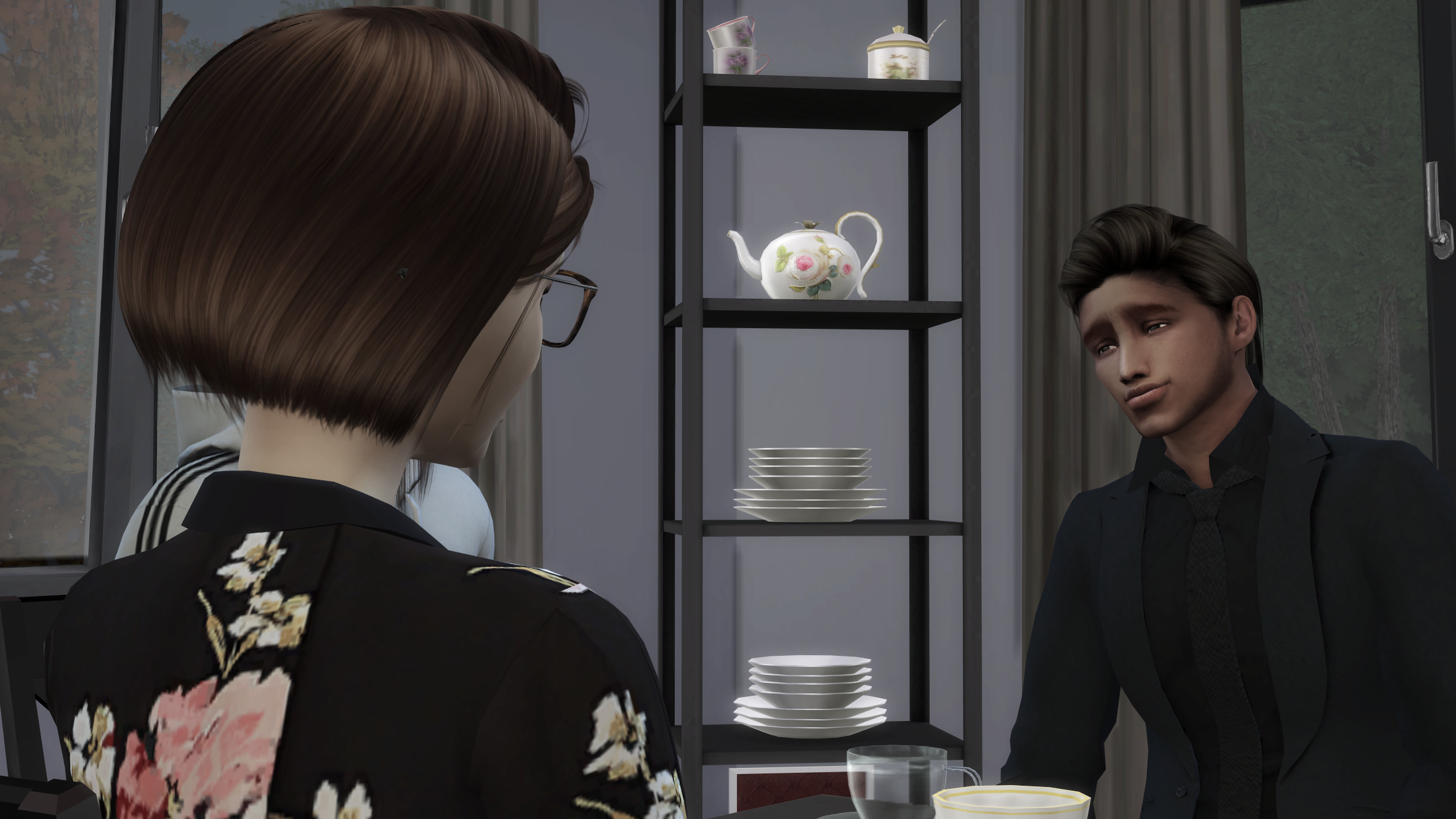 “Nick, could you quickly come to the home office and look at that problem with the desktop I told you about earlier?” Ethan pressed, his facial expression telling Nick to play along.

“What pro.. oh right, THAT problem. Yeah, sure, that’s why I came by, after we already spent all night together drinking. I was on my way home and thought, nah, better go over to Ethan’s house to fix that problem on his computer he told me about when we hung out at that bar earlier getting wasted.” Nick didn’t even sound remotely believable, especially if you knew that he never touched alcohol, not since having been an alcoholic in his early twenties. 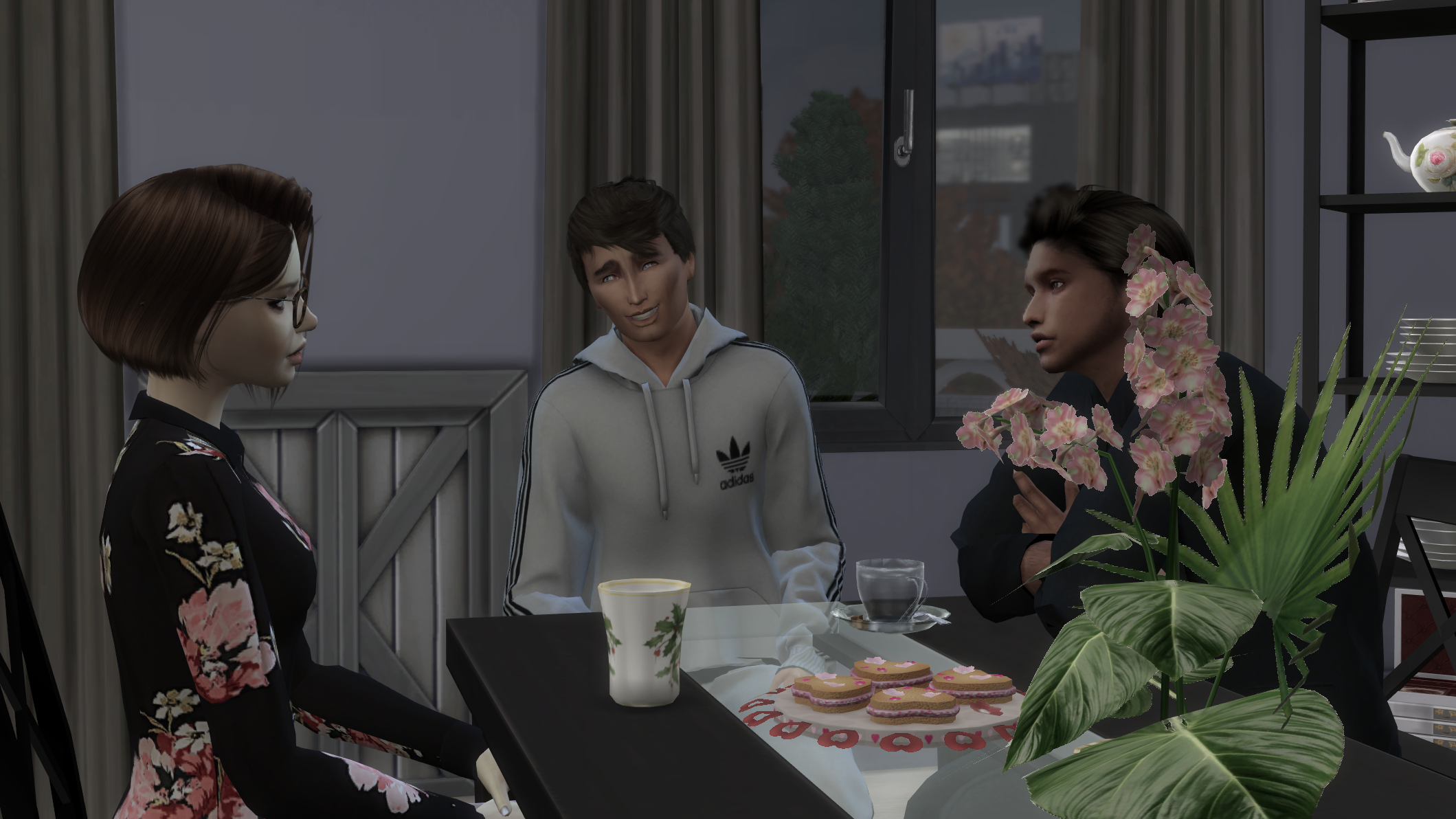 Grace eyed the two men suspiciously as they got up, she probably didn’t miss the odd look Nick gave Ethan before following him to the office where he put his hands on his hips looking expectantly at Ethan. 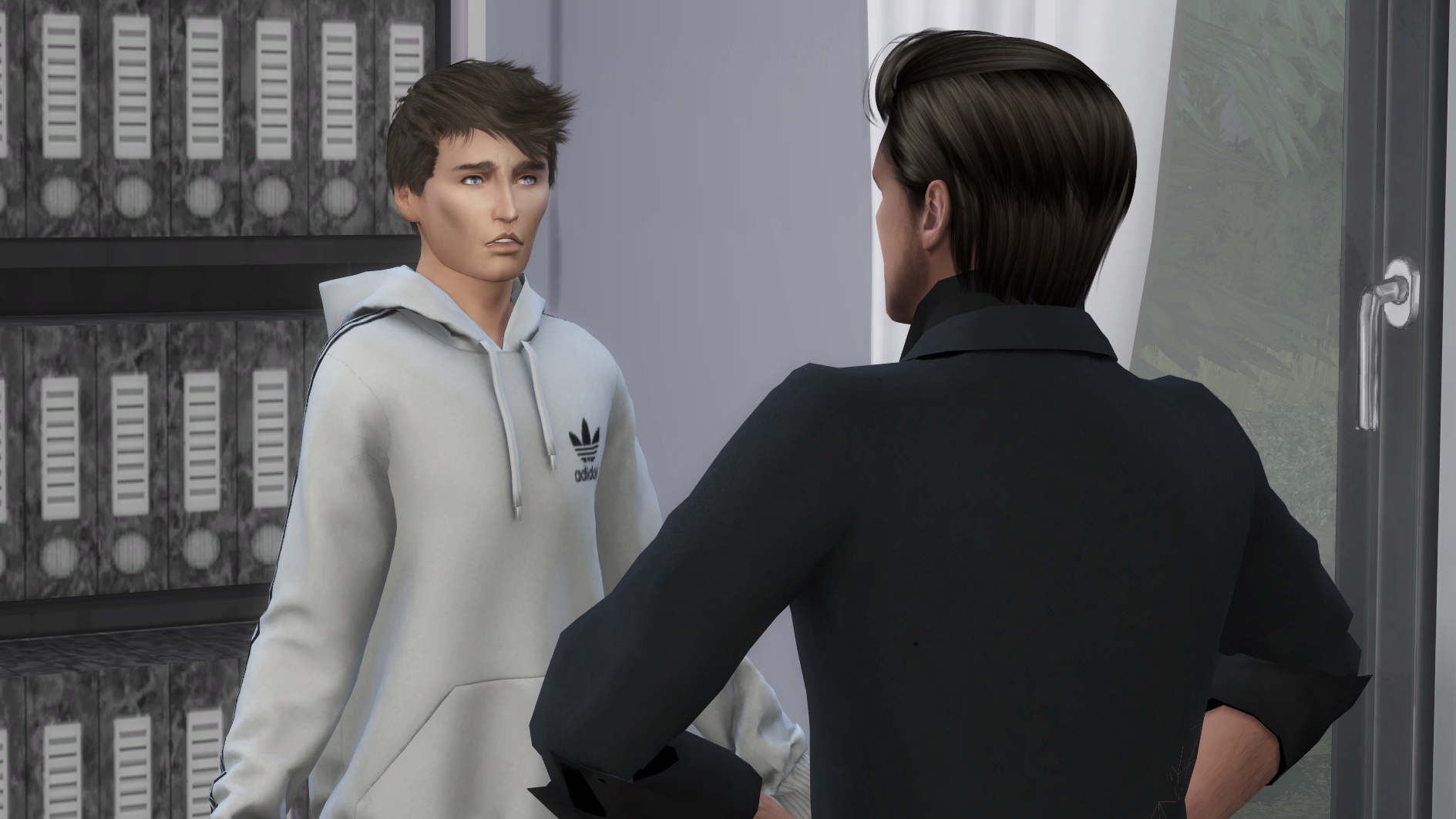 “Yeah, you’d be shocked but I already figured as much, since I haven’t seen your ass since last week, but evidently I spent a nice night chilling with you today that I don’t recall.” Nick frowned.

“Of all the nights to just drop by, you chose tonight. Just my luck. I didn’t know what to tell Grace and yours was the first name that came to mind.” Ethan explained.

“Yeah, I feel all warm, fuzzy and special already. So spill the beans? What – or should I ask whom – were you really doing when you used me as a beard with Grace. Oh, and for future reference, it’s customary to give people you use as covers for your hand-in-cookie-jar moments a courtesy heads up, so they don’t look like complete morons in front of your wife. Text message would have been sufficient.” Nick was not impressed. 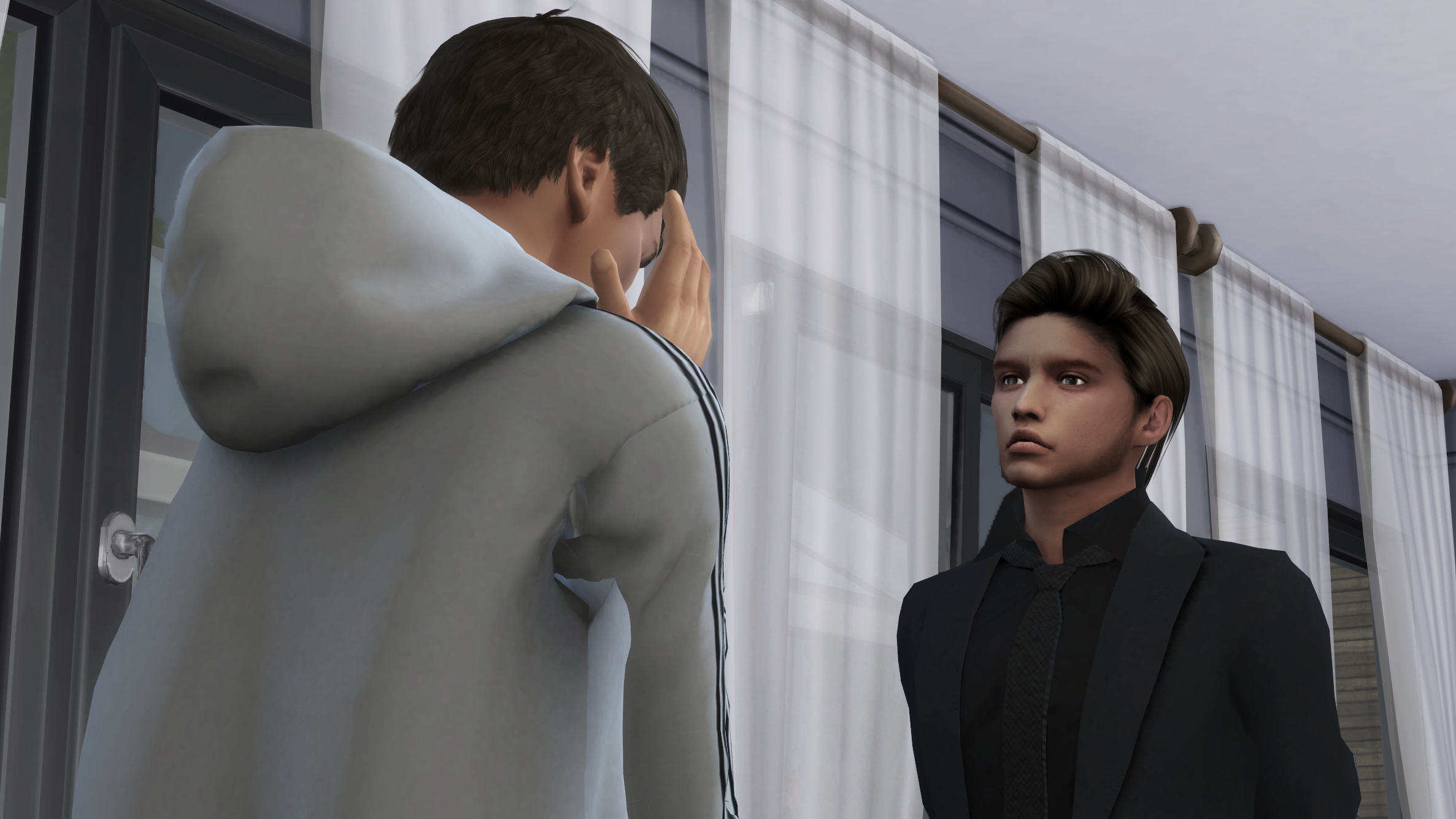 “Sorry. Not like I am a pro at this kind of thing. I was with Blythe. Her husband died today and I picked her up at the hospital, took her home and stayed with her. She’s in bad shape. Doctor gave her a sedative and she couldn’t stop crying … I ended up feeding her – and myself – almost an entire liter bottle of bourbon they had around the house, so I didn’t dare drive home right away … ” Ethan explained.

“I don’t see why you couldn’t tell Grace that. Everybody would have done the same. Well, minus the alcohol.” Nick shrugged unimpressed. 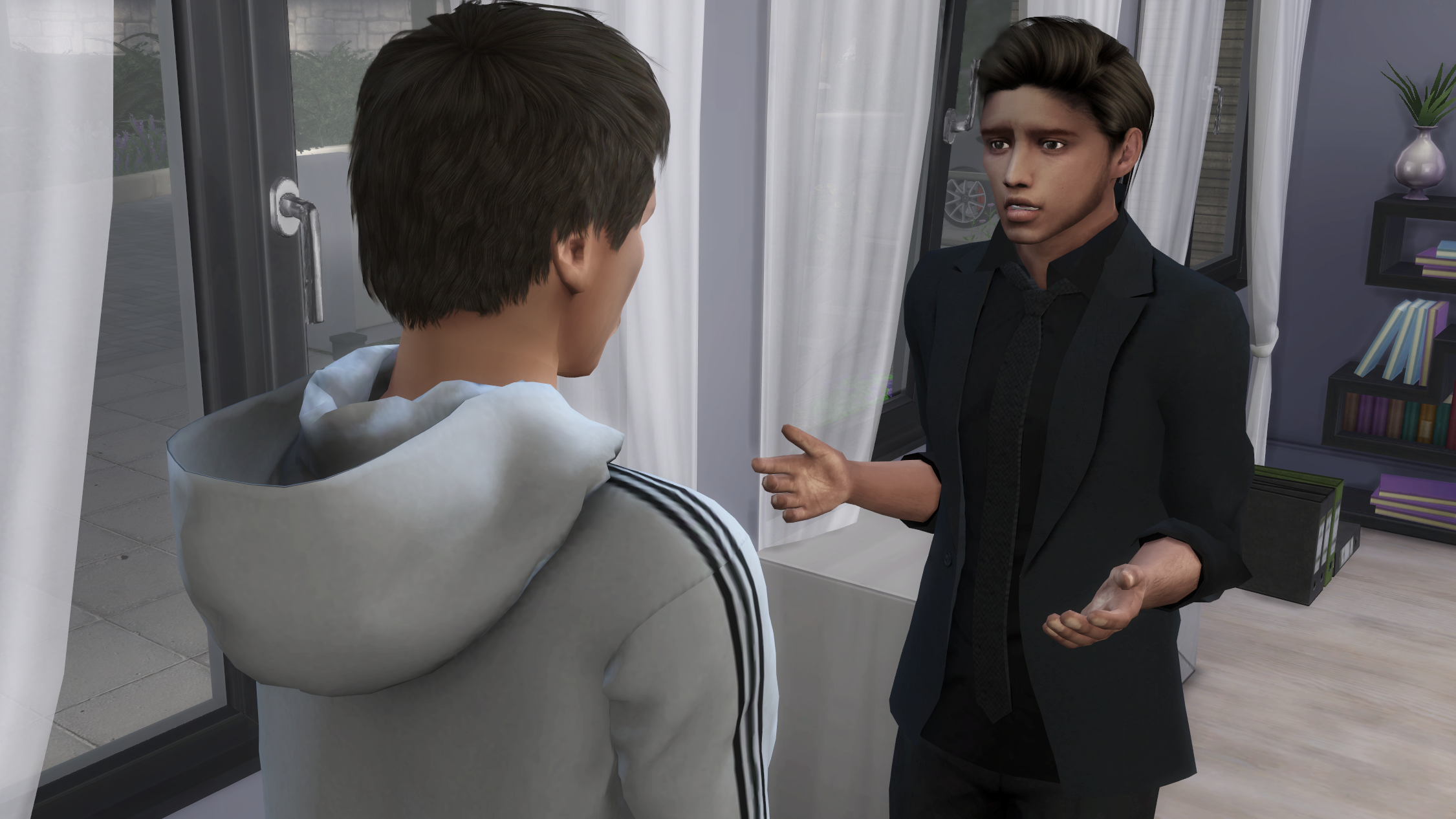 Ethan gave Nick a look that instantly told him the missing pieces of the story.

“Oh no you didn’t! You screwball! What the hell were you thinking?!” Nick roared, shaking his head. 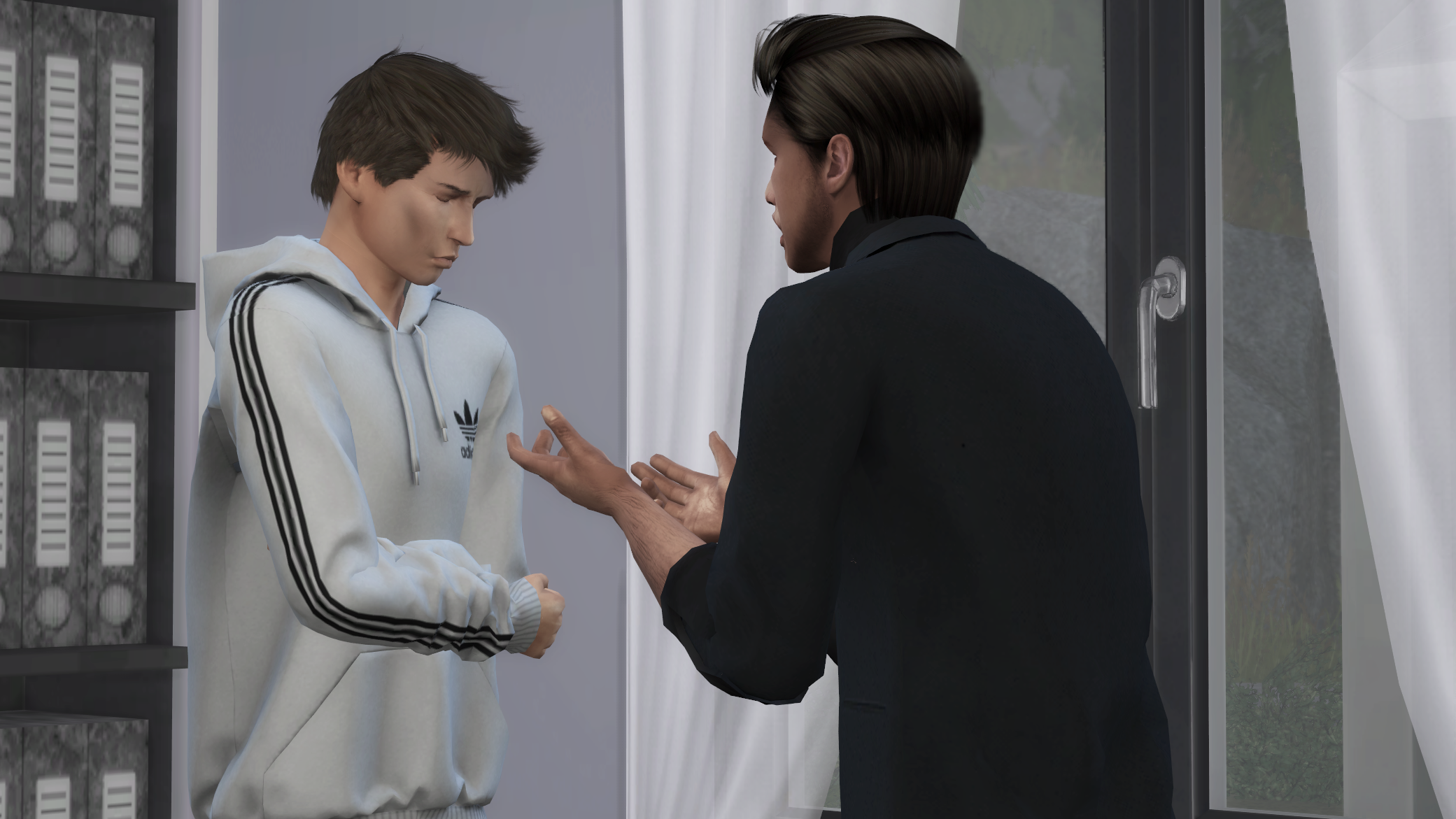 “It just happened. I wasn’t thinking anything …” Ethan defended himself.

“That’s pretty obvious! How great could the passion have been with all the alcohol and her being sedated? Was she even awake for it all or did you just hump her while she was passed out? I really don’t get it! It’s always the quiet ones …” Nick was not happy about the news.

“Keep your voice down! Of course she was conscious! And what do you want me to say? I don’t know how or why it happened and I really don’t need any guilt trips from you now. I feel bad enough already. If Grace finds out. Or Blake. He’s finally so grounded. Or Eli. If my employees or clients get wind of this. My reputation. The company.” Ethan looked pitiful. 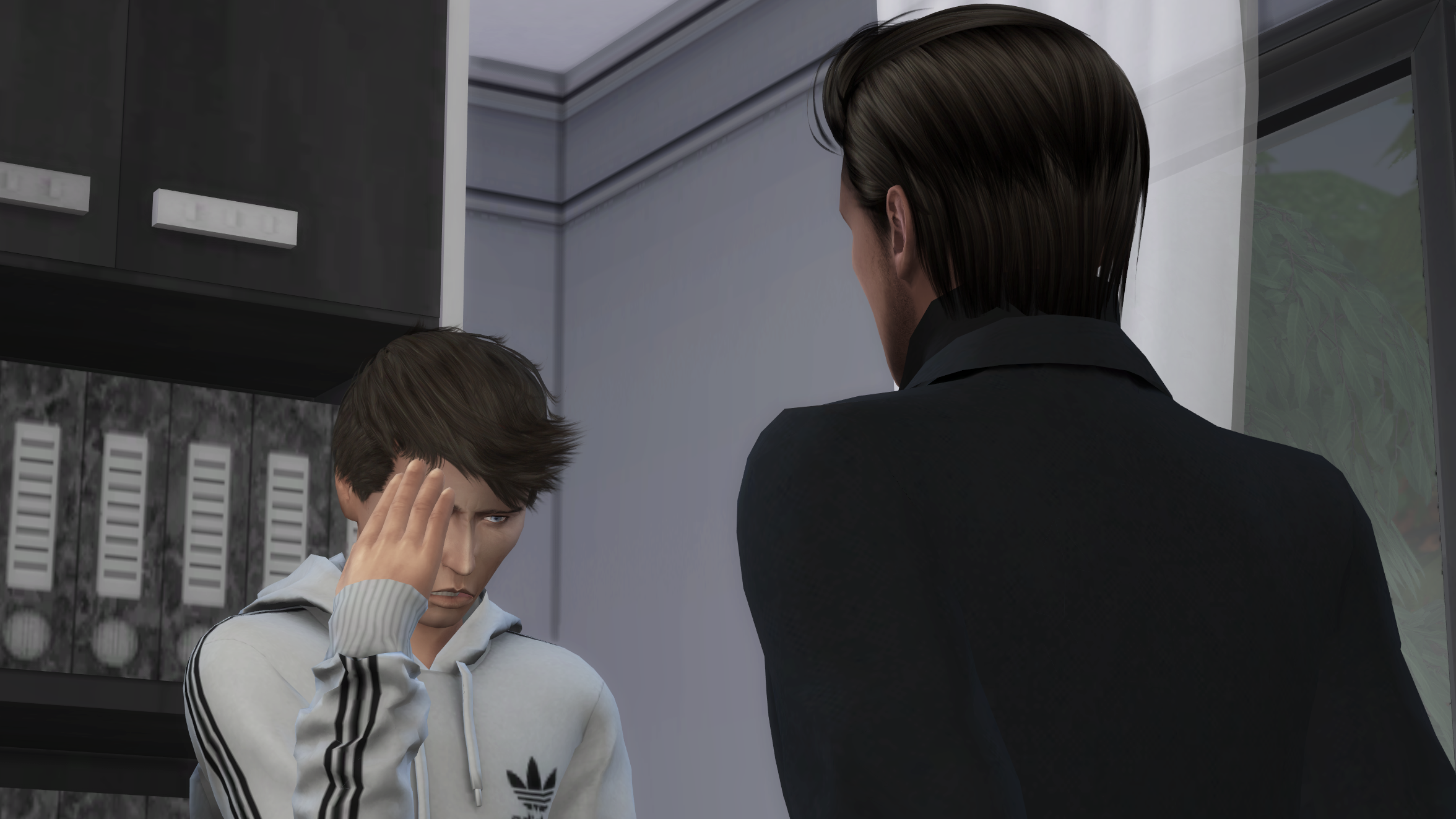 “Seriously man? THAT is your big hangup right now? What about you and Grace? What about the moral aspect of this mess? What about you just cheating on your wife? What example is this for your kids? And for mine, you know, your nieces and nephew?!”

“Is that supposed to help me? Cos it doesn’t.” 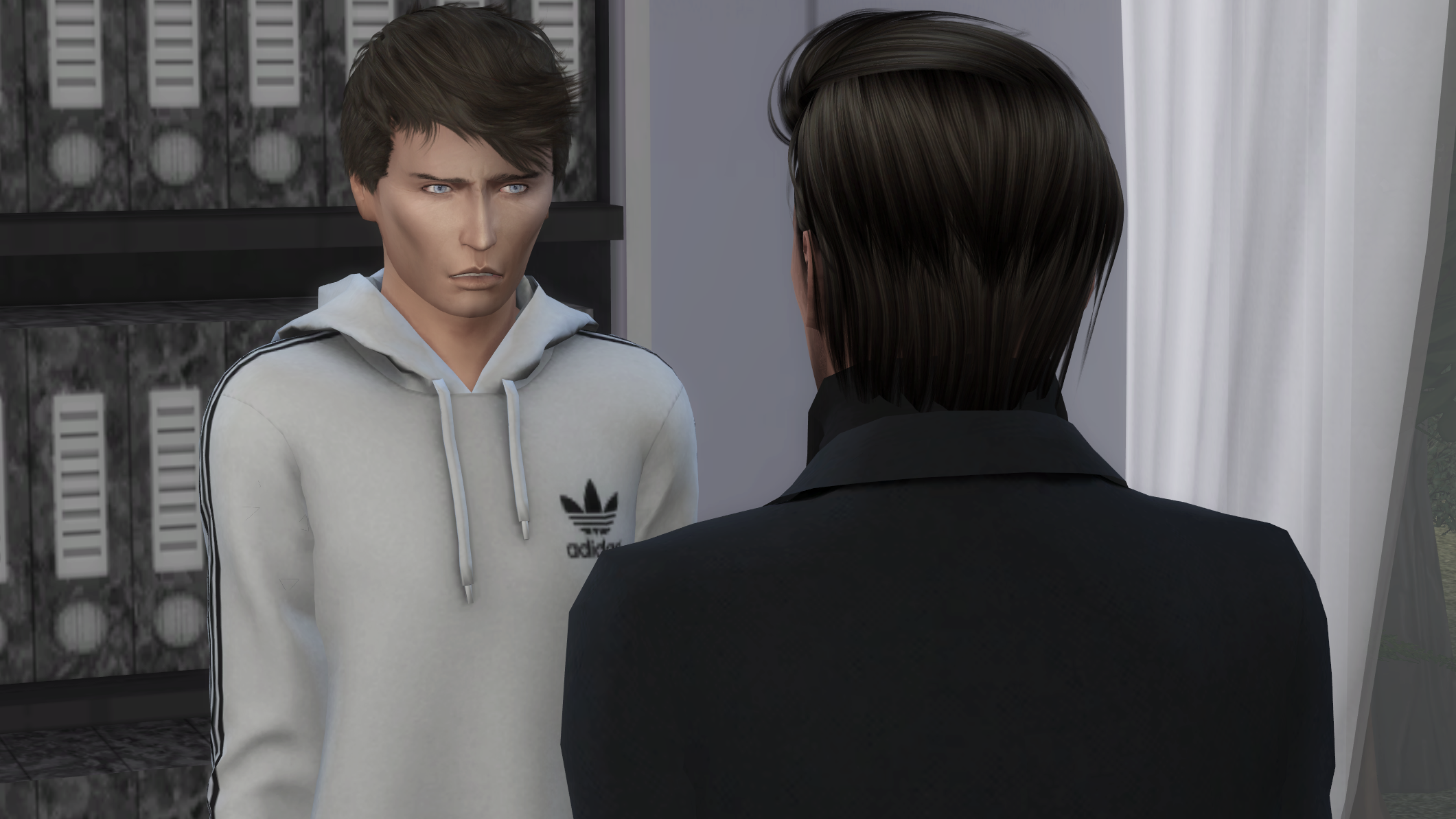 “Help you? Why? Sounds like you already helped yourself to some candy that wasn’t yours to take! You know how I feel about cheating. Nah, I am not trying to kiss your booboos. You made your bed, no pun intended. And what the fuck, man? Blythe just lost her husband, a doctor sedates her, and you have nothing better to do but fill her small frame up to the stopper with high percentage alcohol and then bang her only hours after her old man kicked the bucket?! Nah, all out of pity for your ass. Poor Grace! I don’t even know what to do with that info in my brain right now. It makes my head hurt, man.” Nick shook said hurting head repeatedly. 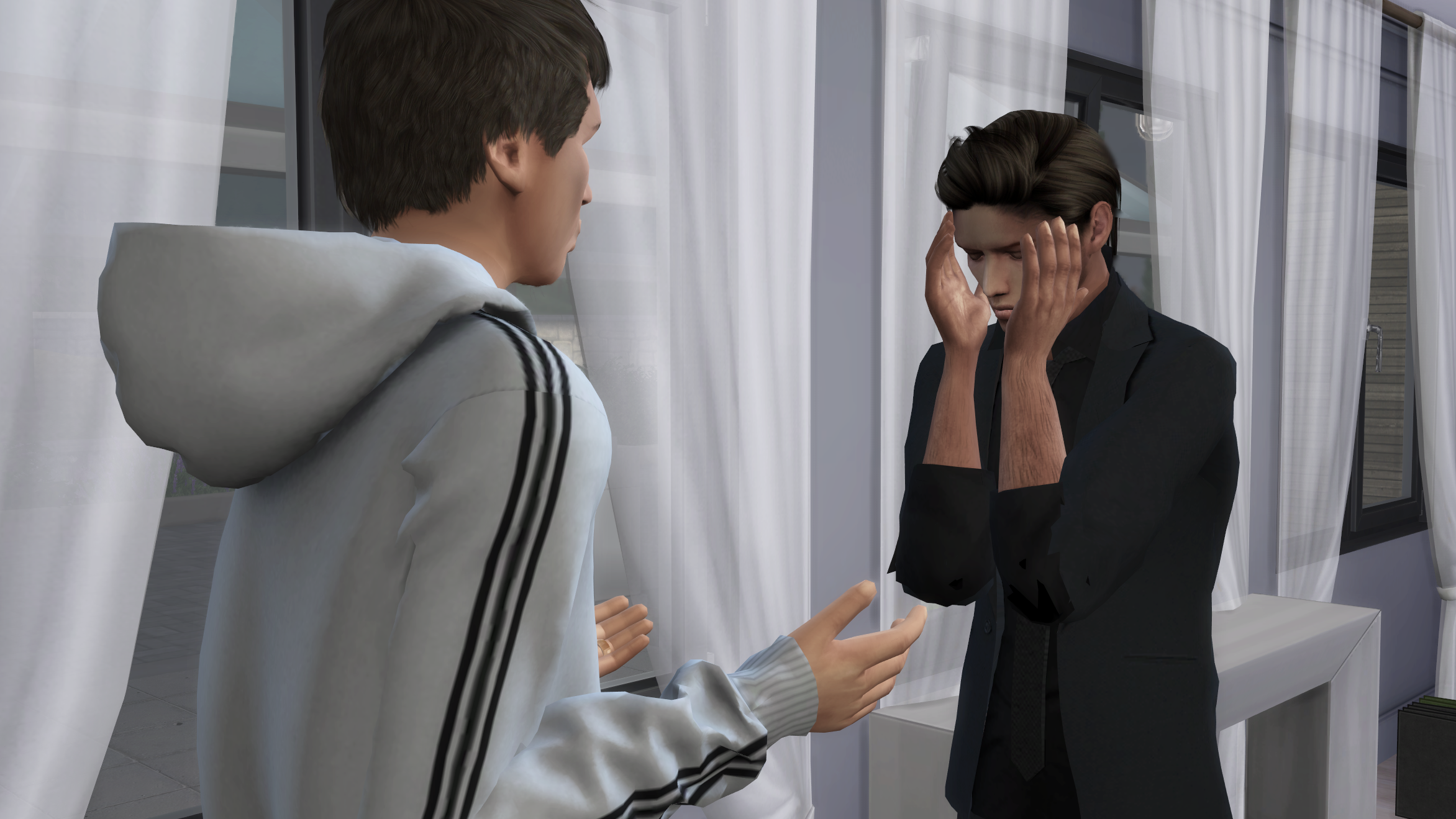 “Hate on me all you want, but for God’s sake don’t tell Grace. Or my sister. Don’t tell anybody. Please. Do it for me. You are my best friend. I need some time to figure this shit out.” Ethan begged.

“Grace is my friend too. And so is your sister, who happens to also be my wife and I’d like to keep it that way. You know what Ez would do to me if she ever found out I knew about this shit and that didn’t tell her? Or that I just covered for you? For cheating? Your sister may be a tiny little thing, but she scares the crap out of me. And I love her and want her to continue being my wife for a long time. But I won’t tell Grace. That is YOUR job! I am not going to break her heart for you!” 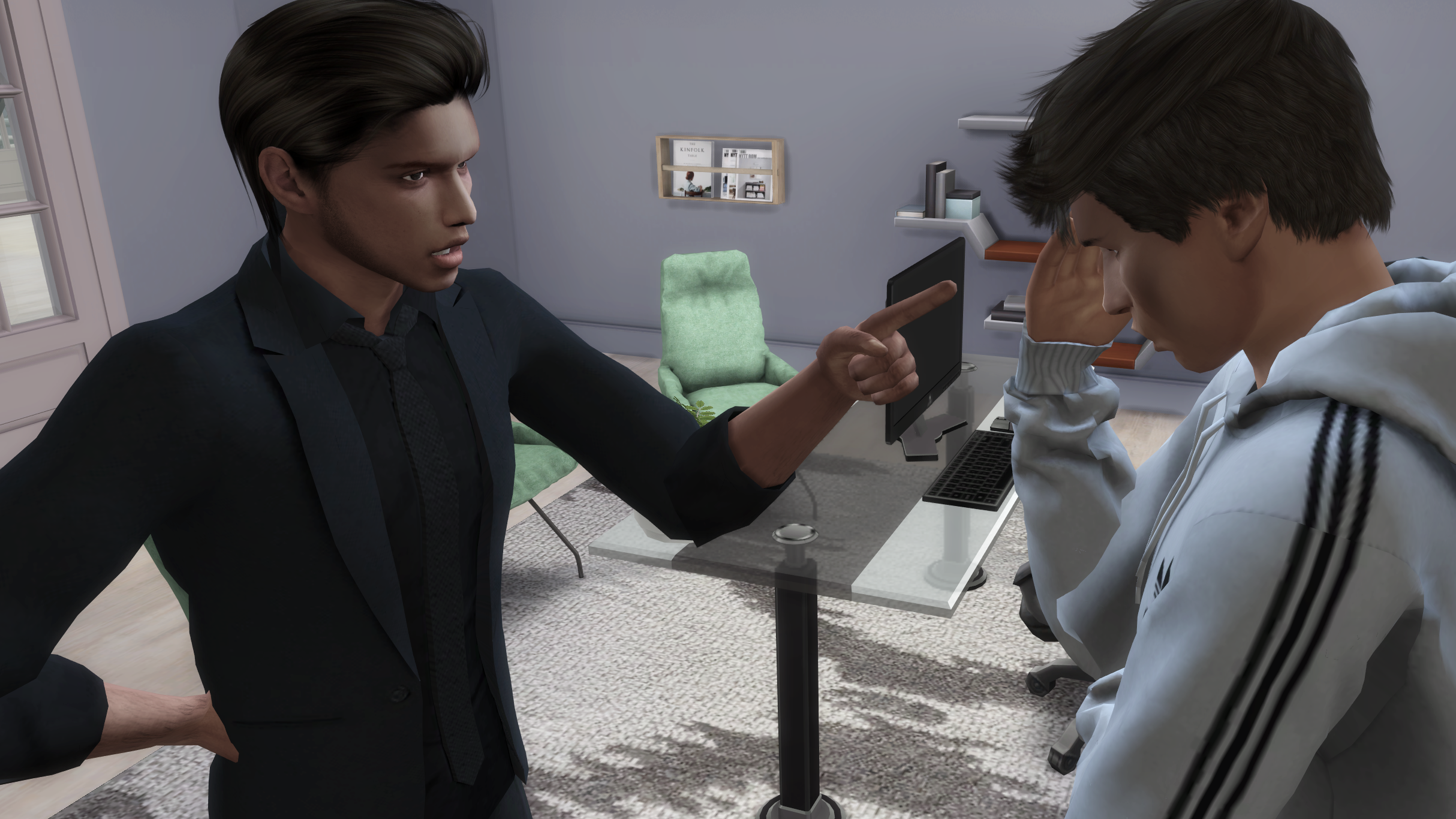 “If you keep your mouth shut, at least until I figured out what to do about all this mess, Ezzy won’t ever know that you knew.”

“Great plan, Einstein. If all else fails, I can be your divorce attorney and pay for my own divorce – or funeral considering Ezzy’s temper – with the money I made off you.” Nick’s tone oozed sarcasm. 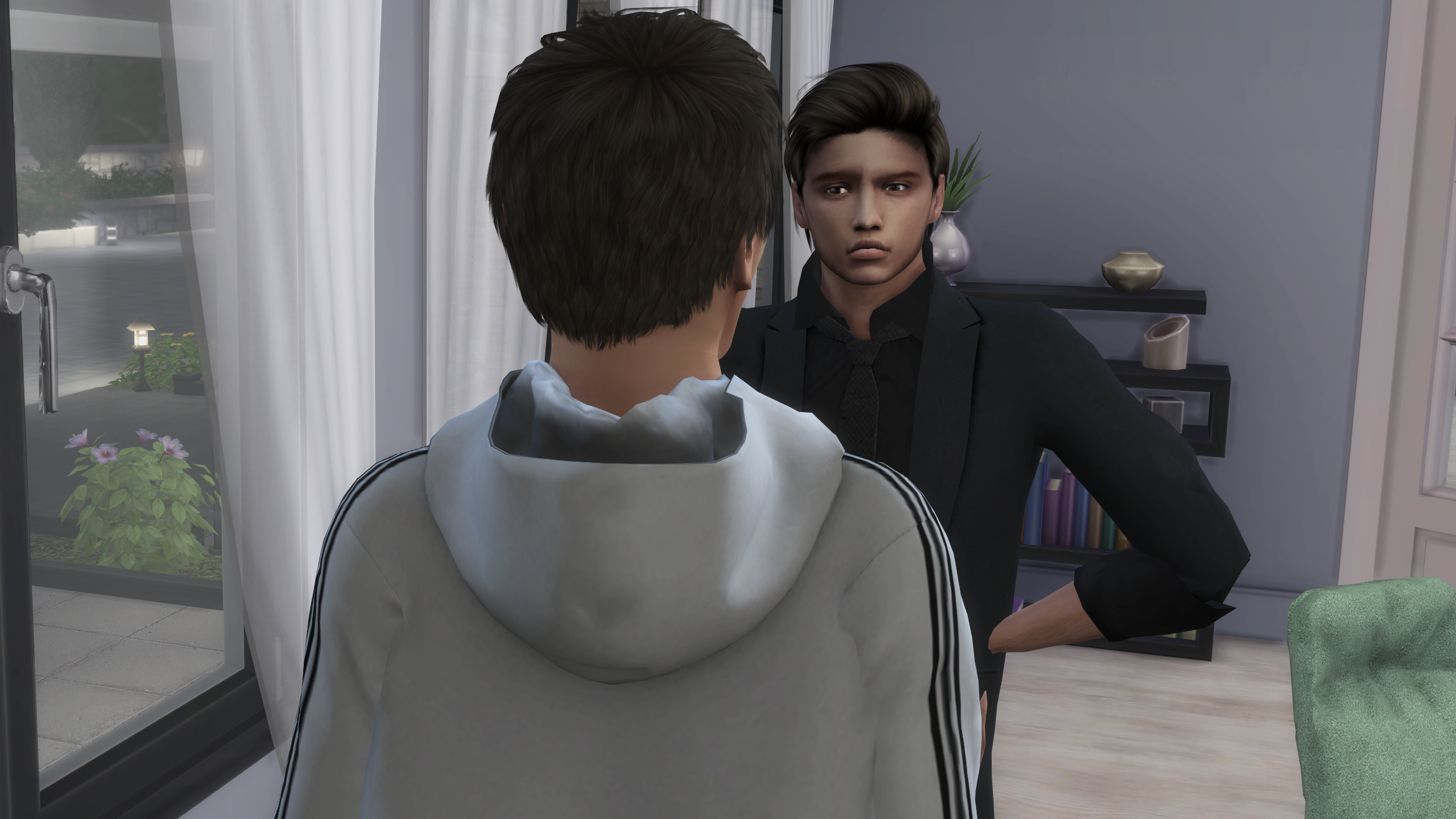 “Good thing you are so positive about helping a friend out of a mess.” Ethan sounded devastated. 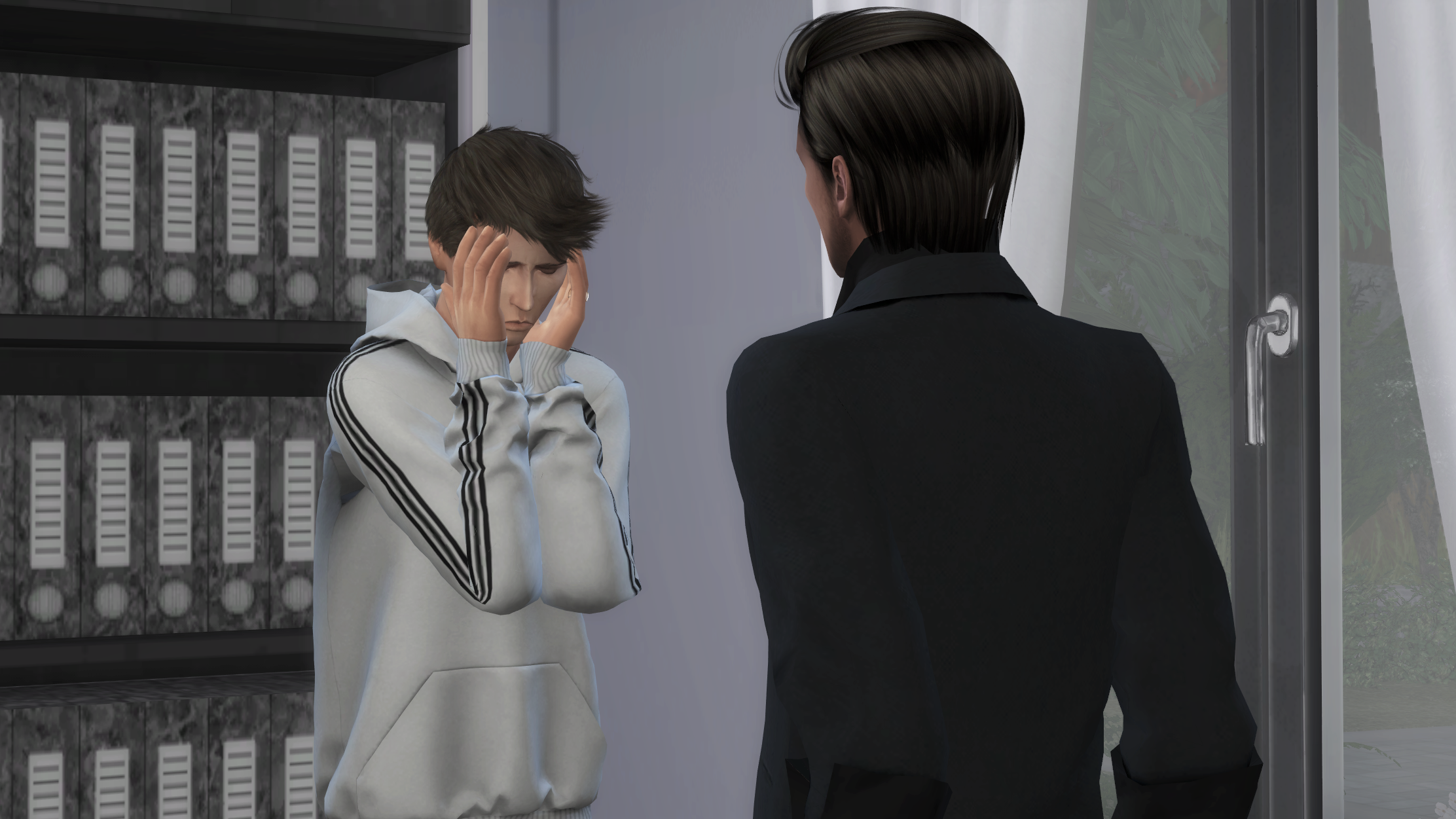 “Trust me, I am helping you. If we weren’t friends, I’d be beating your cheating ass right now. Cheating on a woman like Grace … with a sedated, drunk Blythe. I mean really?! Two really sweet ladies and you use them for your geriatric second wind personal spring break?”