“Mr. Winters certainly has an exquisite taste, I must say … so nice of him to take over most of the planning … how generous. But Sarah is his only daughter, no wonder he went all out.” Blythe whispered to Ethan. 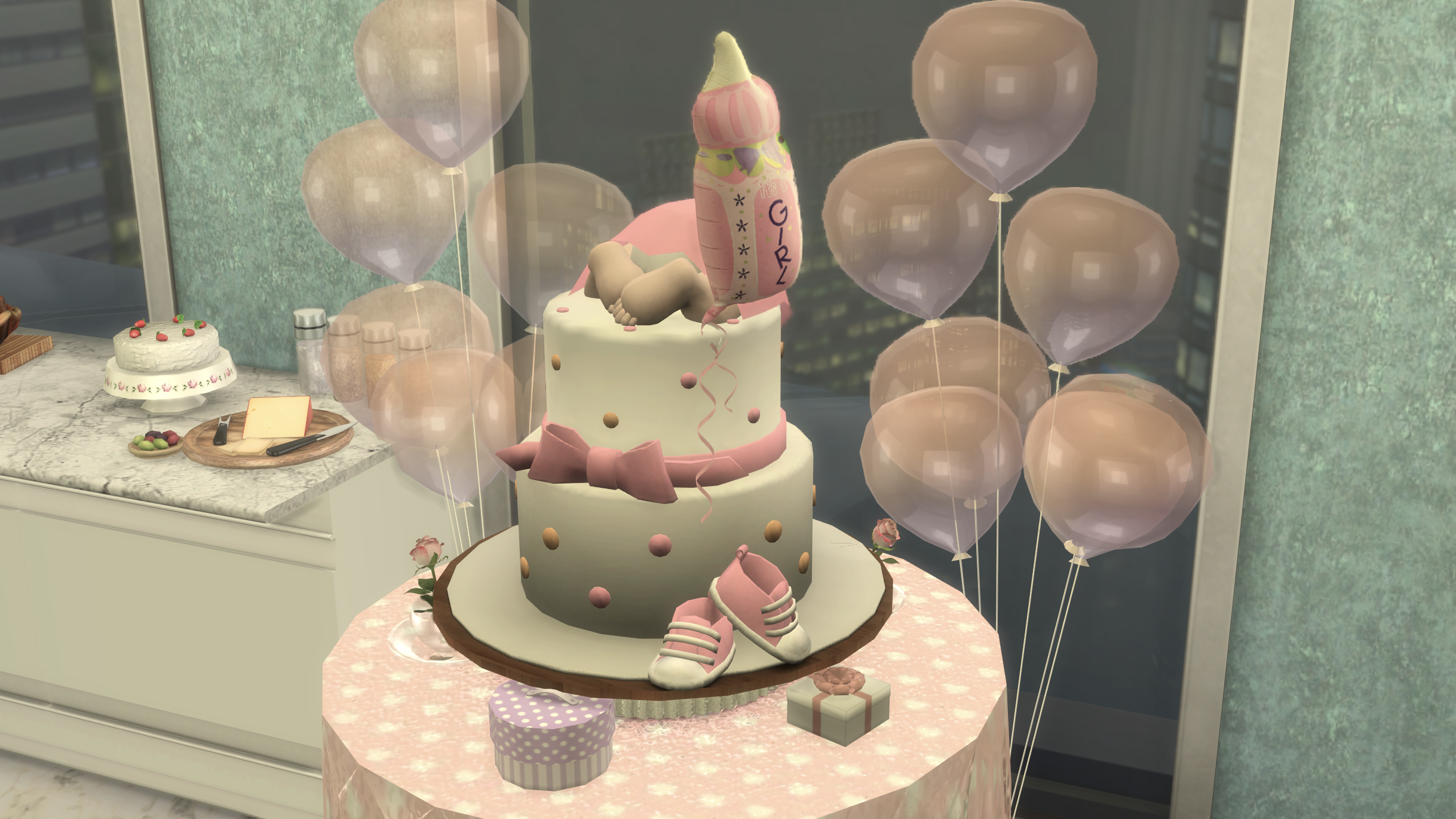 “I’d say, especially since it’s not his money he was spending, but mostly ours. Joke’s on me, I just had to offer. Well, at least we probably don’t have to have a separate baby shower seeing she is about ready to give birth at any given moment. Hopefully she at least makes it through the ceremony. This wedding should have happened weeks – nay – months ago, but no, it had to be THIS very venue. My son celebrates some fancy, eleborate shotgun wedding slash baby shower. If you had told me that a year ago, I would have put Eli up for adoption then, at 21 years old.” 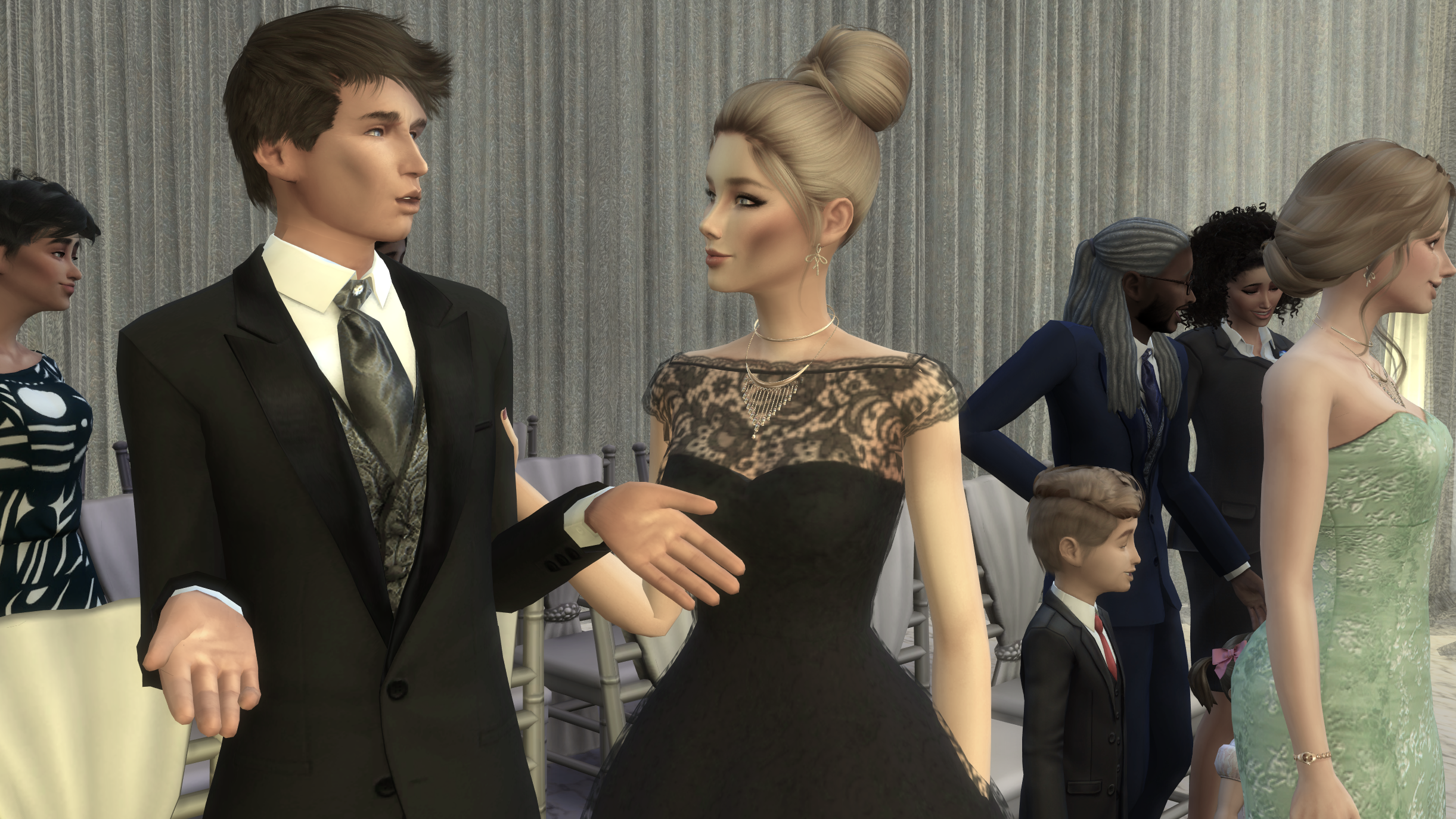 “Ethan! Don’t be a grump! It’s our boy you are talking about, and his family. That gender reveal cake is a nice touch and this is a real one of a kind wedding. May I remind you that you wanted him to get married as soon as possible. This is the price you pay for forcing your will onto your grown children.”

“That’s only because I know Eli. I noticed the evening he first told us about the pregnancy that there was something about that girl, the way he spoke about her, defended her honor. After meeting her and seeing them together a lot, I am certain he is already madly in love with her, how could he not be, Sarah is wonderful, Eli just probably hasn’t realized how much he loves her yet. Same goes for her. What all the parents think is really secondary at best. It’s their lives. Just you wait, this will be another sweet romance success story. I didn’t need to interfere. If Eli felt strongly about not wanting to marry her, he wouldn’t. He is a sweet boy, but like a mule if he doesn’t want something. He went out on his own accord and bought her ring with his own money. So, you quit being growly and be excited.”

“I wish I could have your optimism. Damned Cameron curse!” 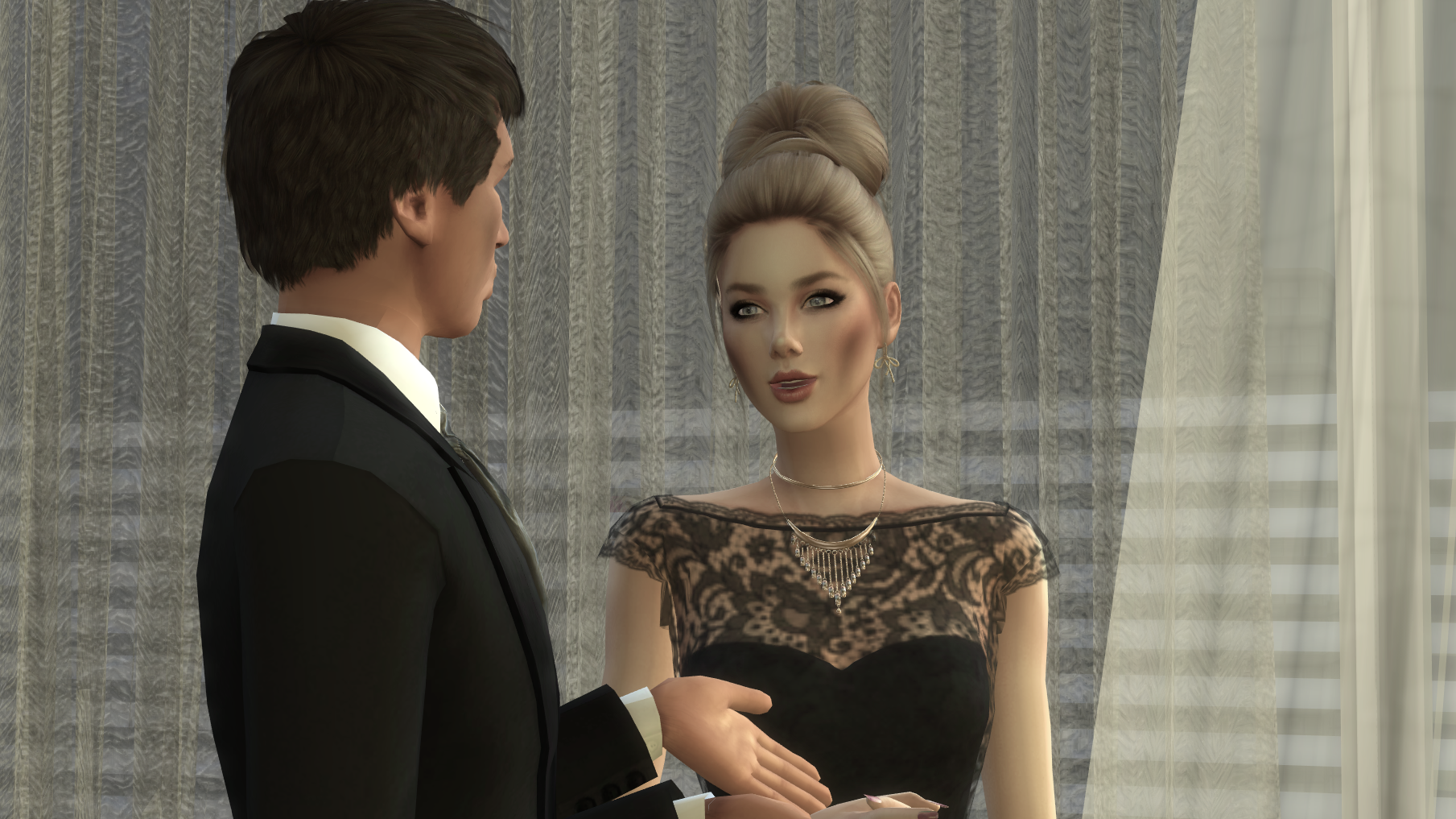 Ethan obliged and smiled as “Here Comes The Bride” started to play.

Eli looked nervous standing by the altar with Blake as best man and Parker as groomsman across from two of Sarah’s friends as maid of honor and bridesmaid. 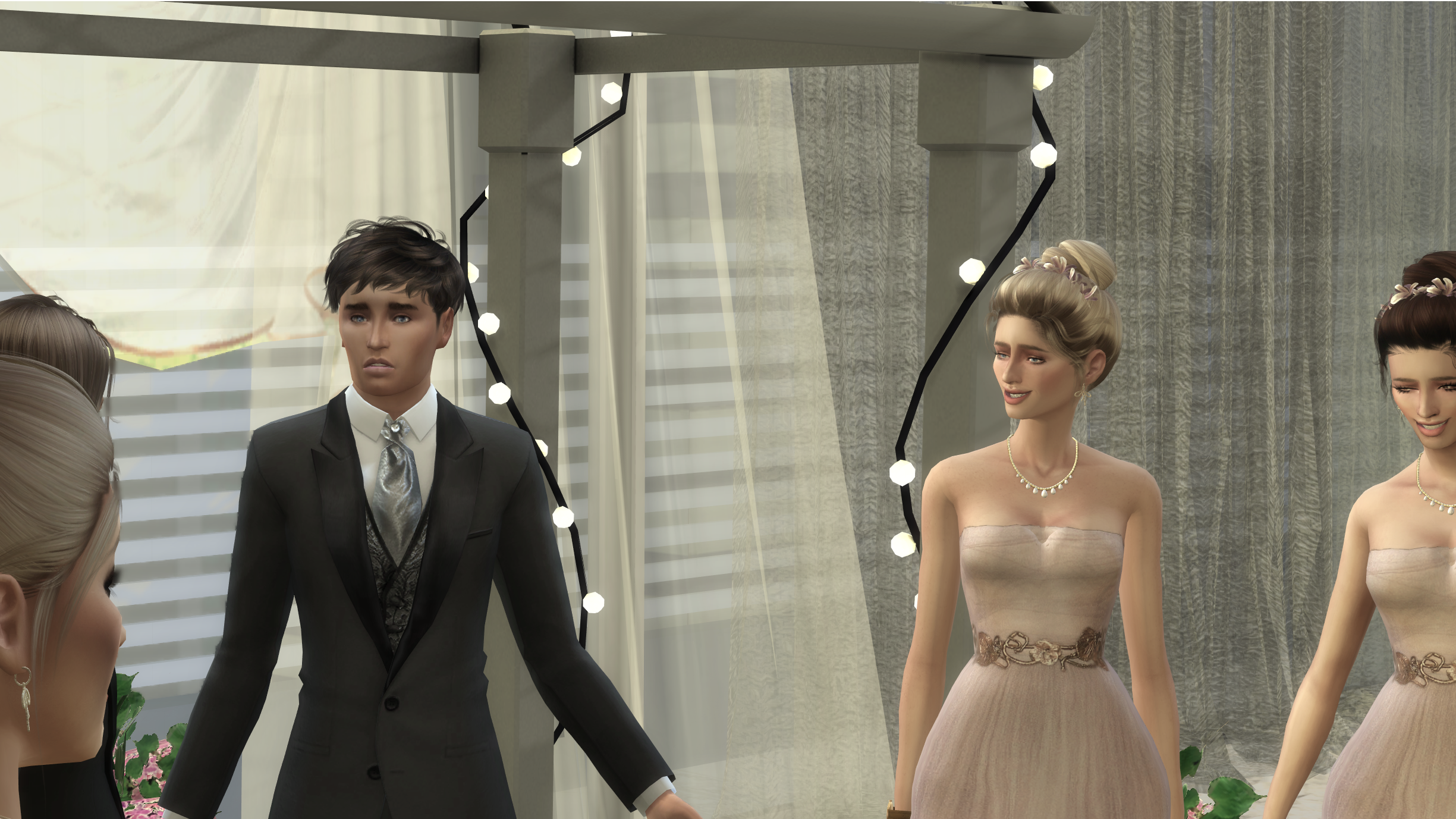 Then Mr. Winters lead his daughter down the aisle to give her away.

She looked stunning, despite the now immense baby belly. Eli looked about ready to faint and Sarah looked as if she was being lead to the guillotines. 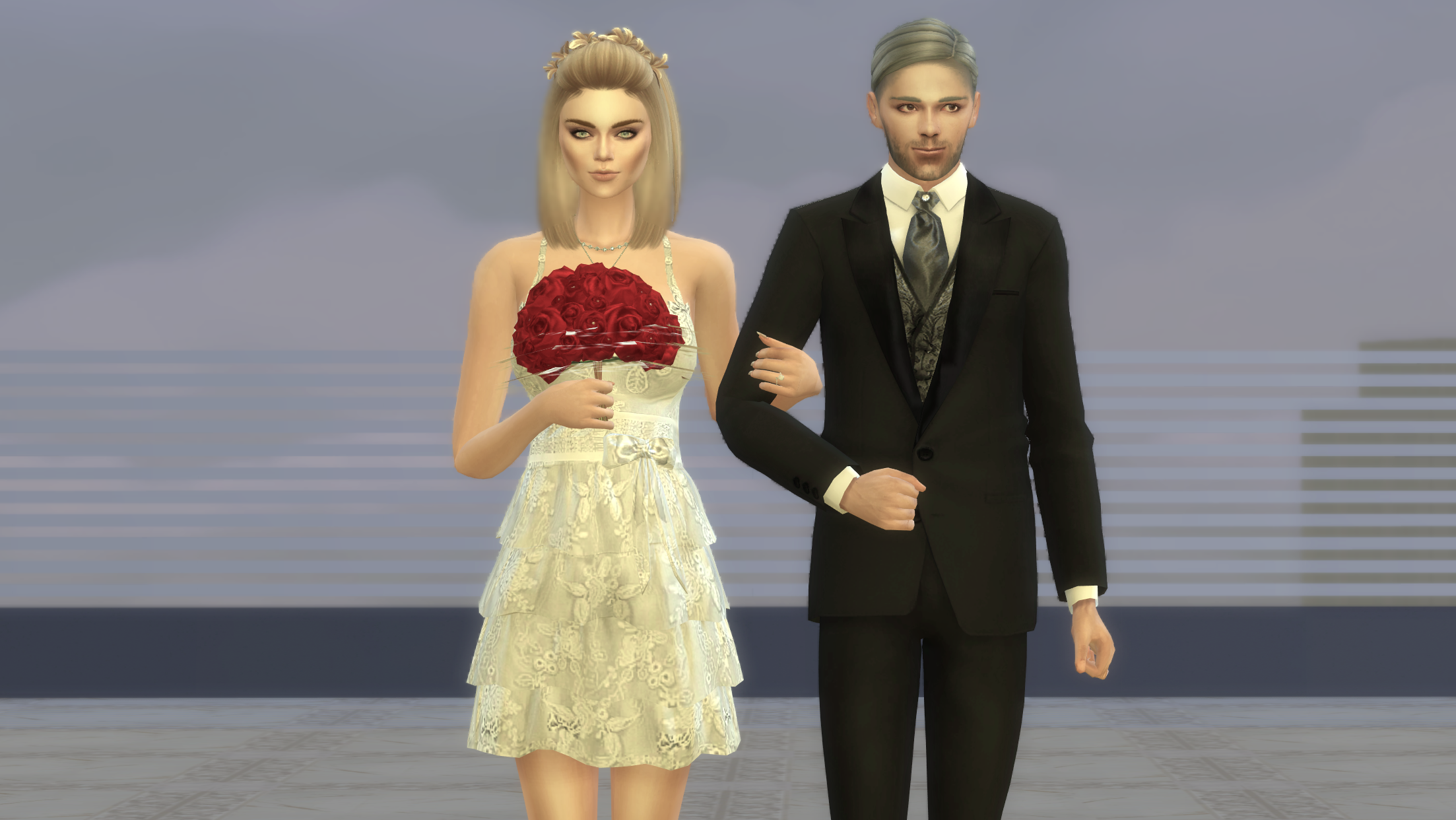 They managed to get through the ceremony together, both nervous with a weird feeling in their stomachs.

After Eli realized she was so nervous she was shaking, his hand found hers and they held on to each other until the rings were exchanged, the ‘I dos’ were spoken and they were pronounced husband and wife. 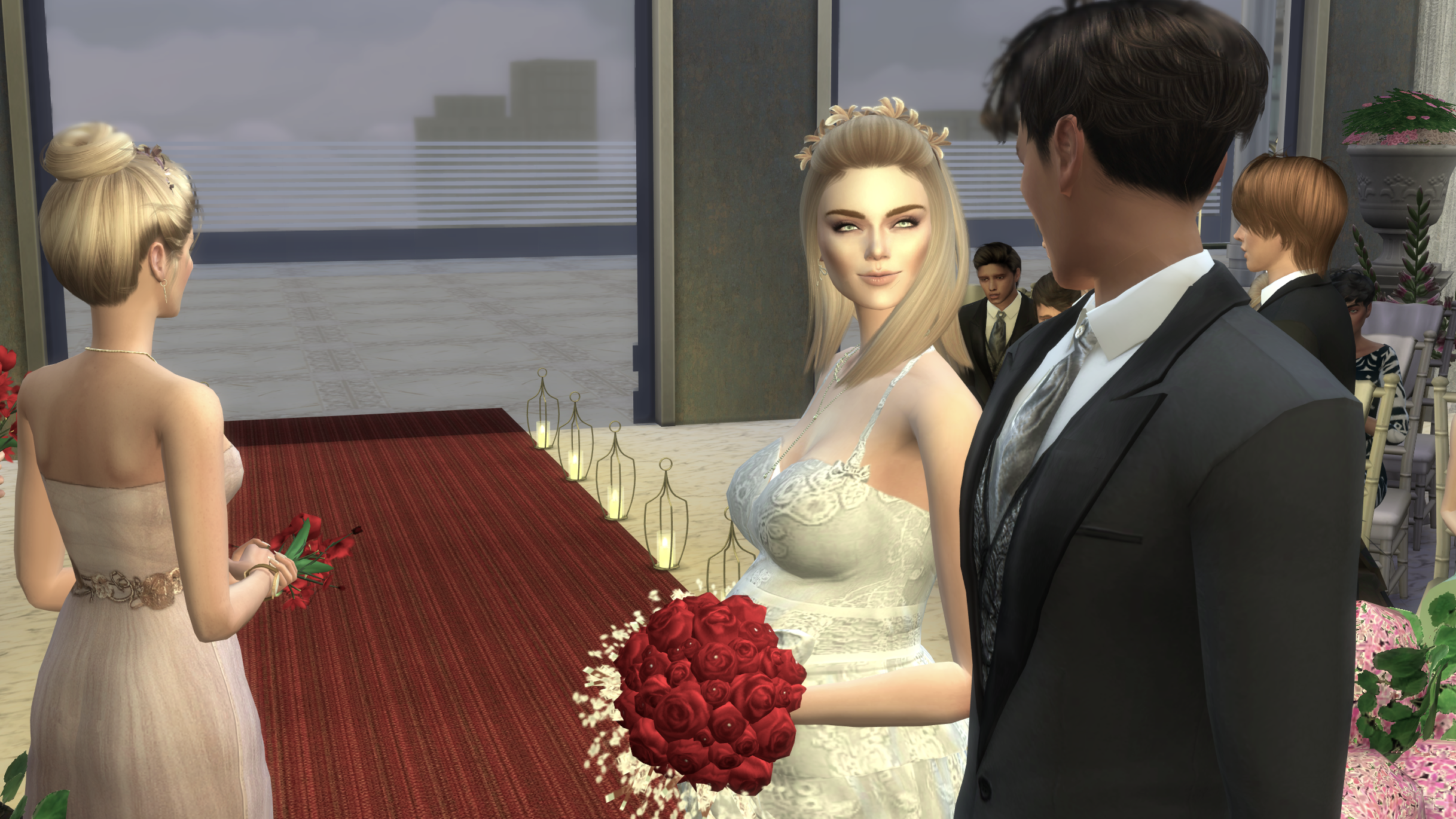 Both were relieved when it was all behind them and they got to sit down for the dinner.

“How’s my daughter?” Eli whispered to her at the bridal table. 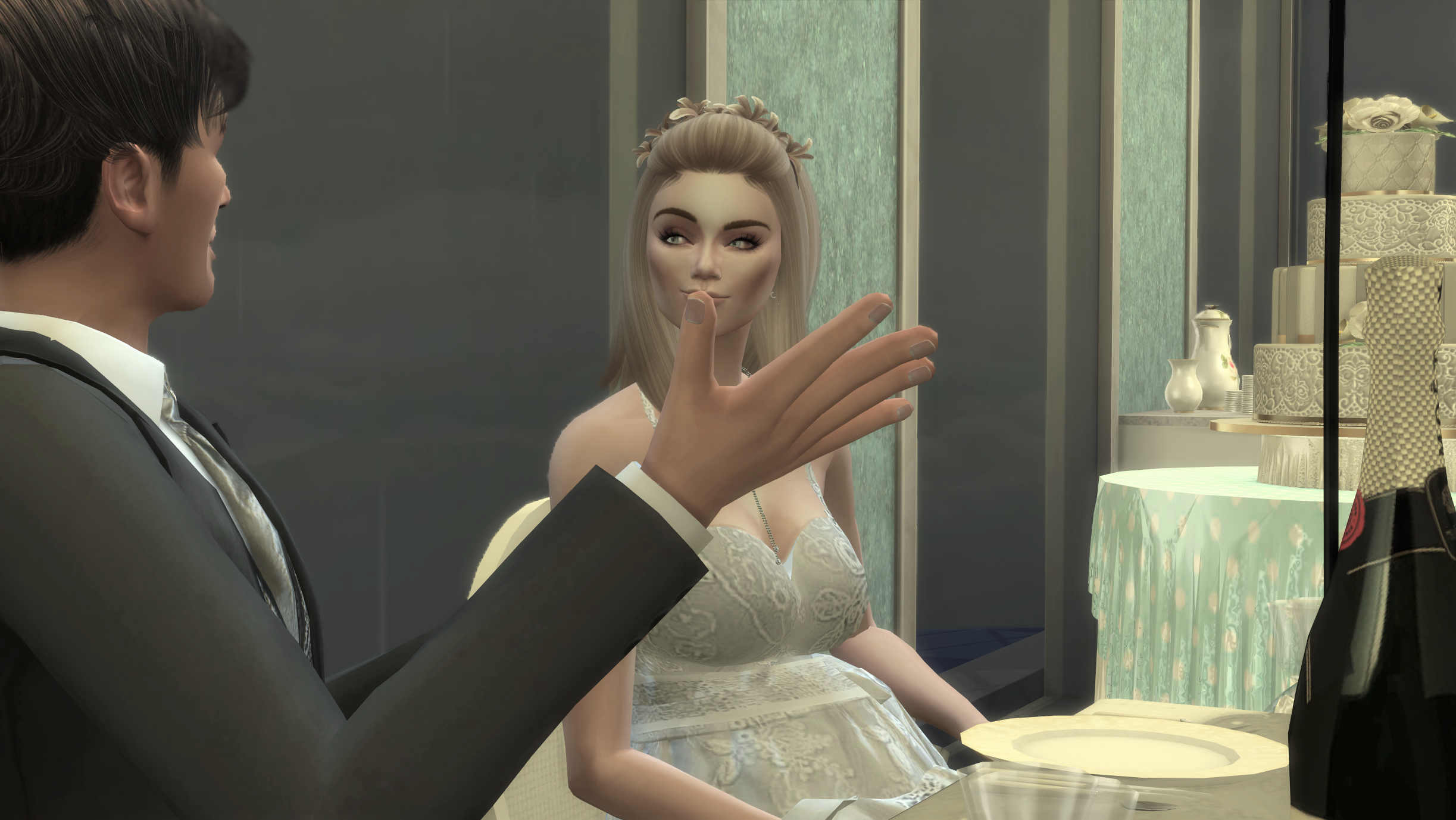 “Being a brat! She has been kicking all night. I am bruised on the inside.”

“Maybe she is just dancing. A happy baby. Just a few more weeks and you’re done with having to deal with her emotions inside of you. We all get to enjoy them then. Yes, I crack myself up, too.” 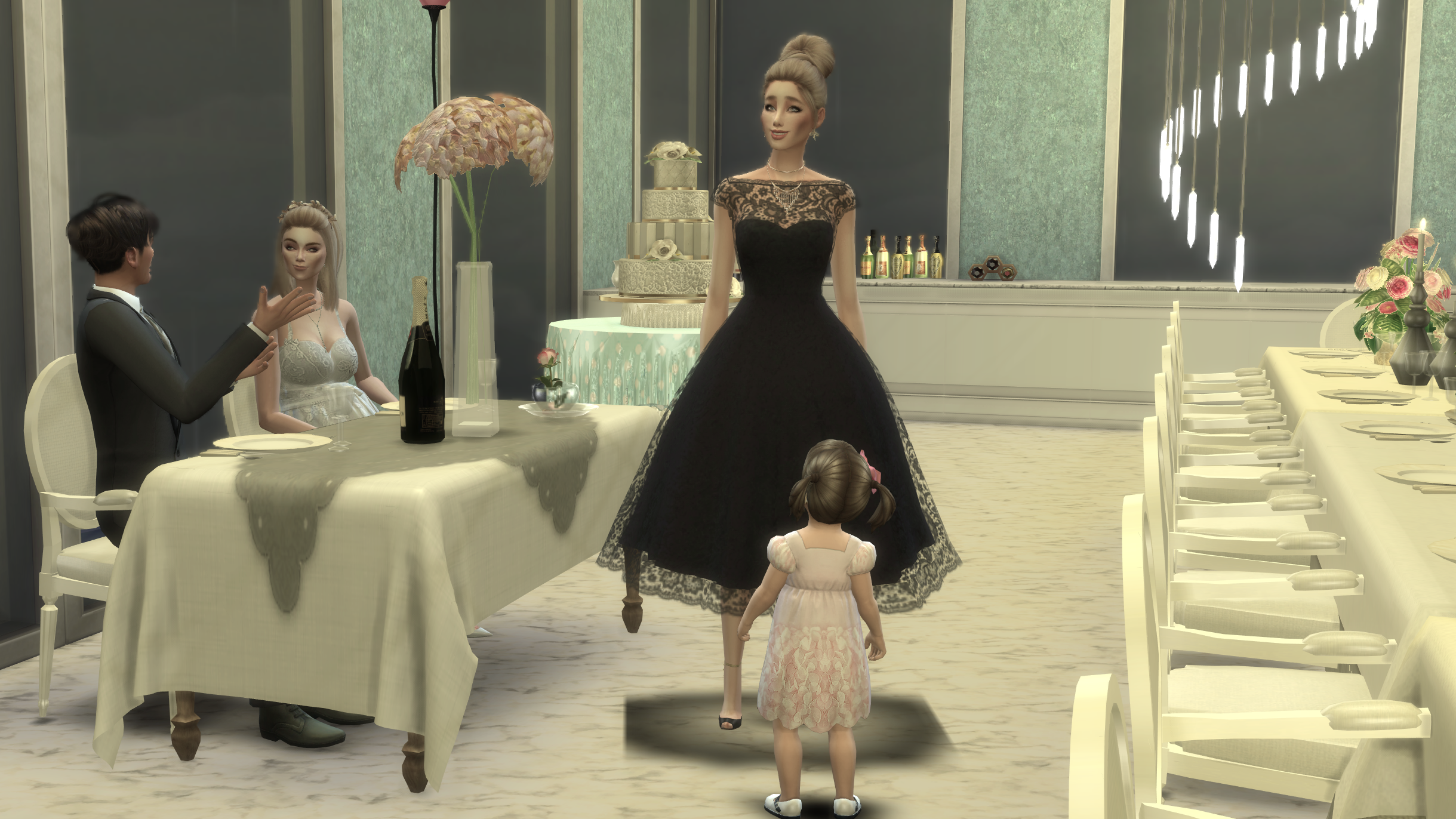 “Don’t remind me of the birth and sleepless nights. I swear I’d die of worry on my wedding day.”

“It is. Dream wedding. Just not at all as I dreamed mine would be. Especially never imagined myself looking like a whale in my wedding pictures.”

“You don’t look like a whale! You look pregnant, that’s all. At least you have a good excuse for your wedding gown not fitting right 20 years from now.” 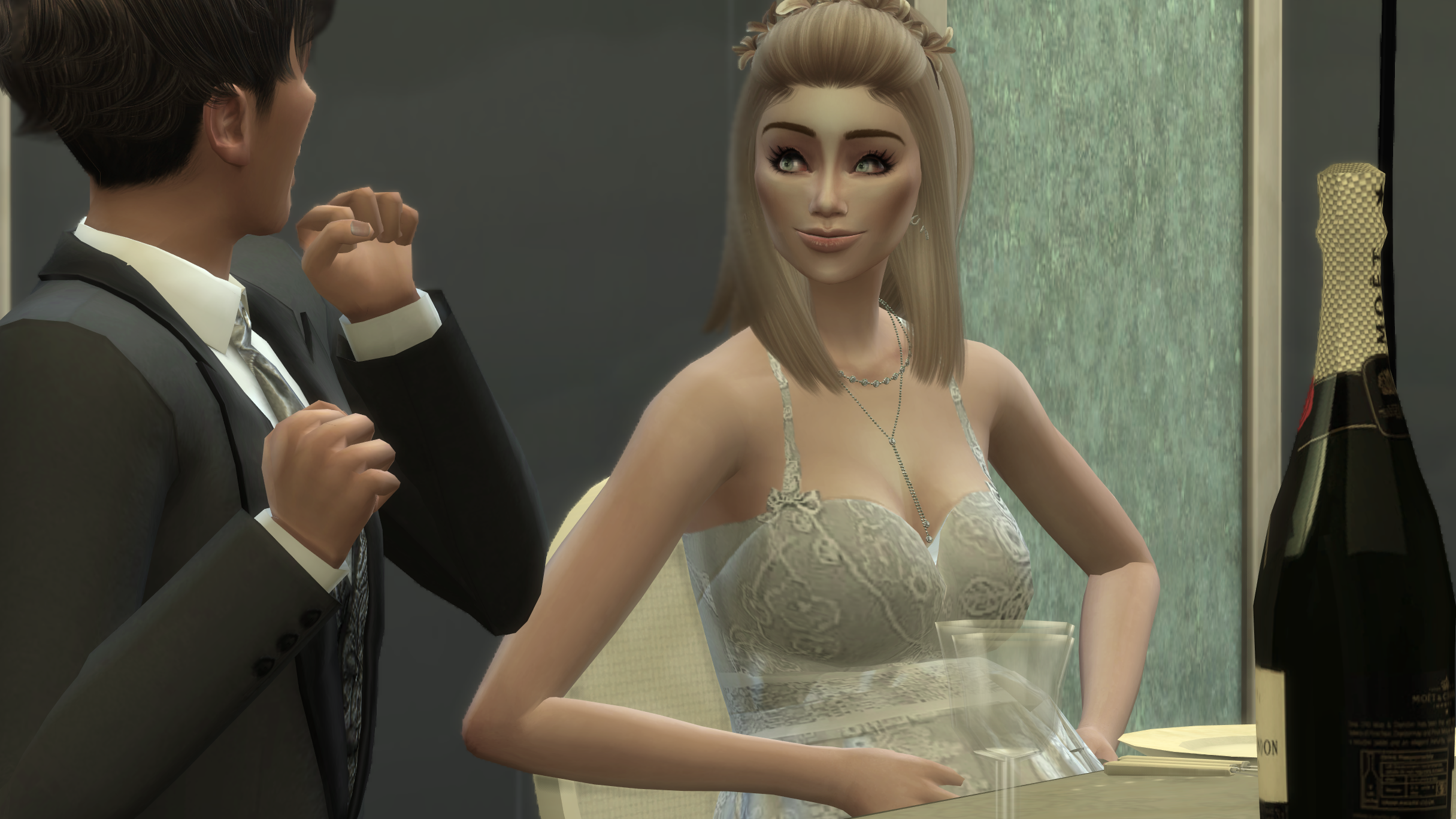 Sarah laughed hard at that.

Their first dance was when something really happened. Maybe it was the location, maybe it was the mood lighting, maybe the pressure finally lifted, but somehow suddenly the entire rest of the world disappeared and all Elias could see were Sarah’s beautiful eyes as he twirled her around the dance floor. His heart skipped a beat when their eyes met and she held his gaze, smiling happily. 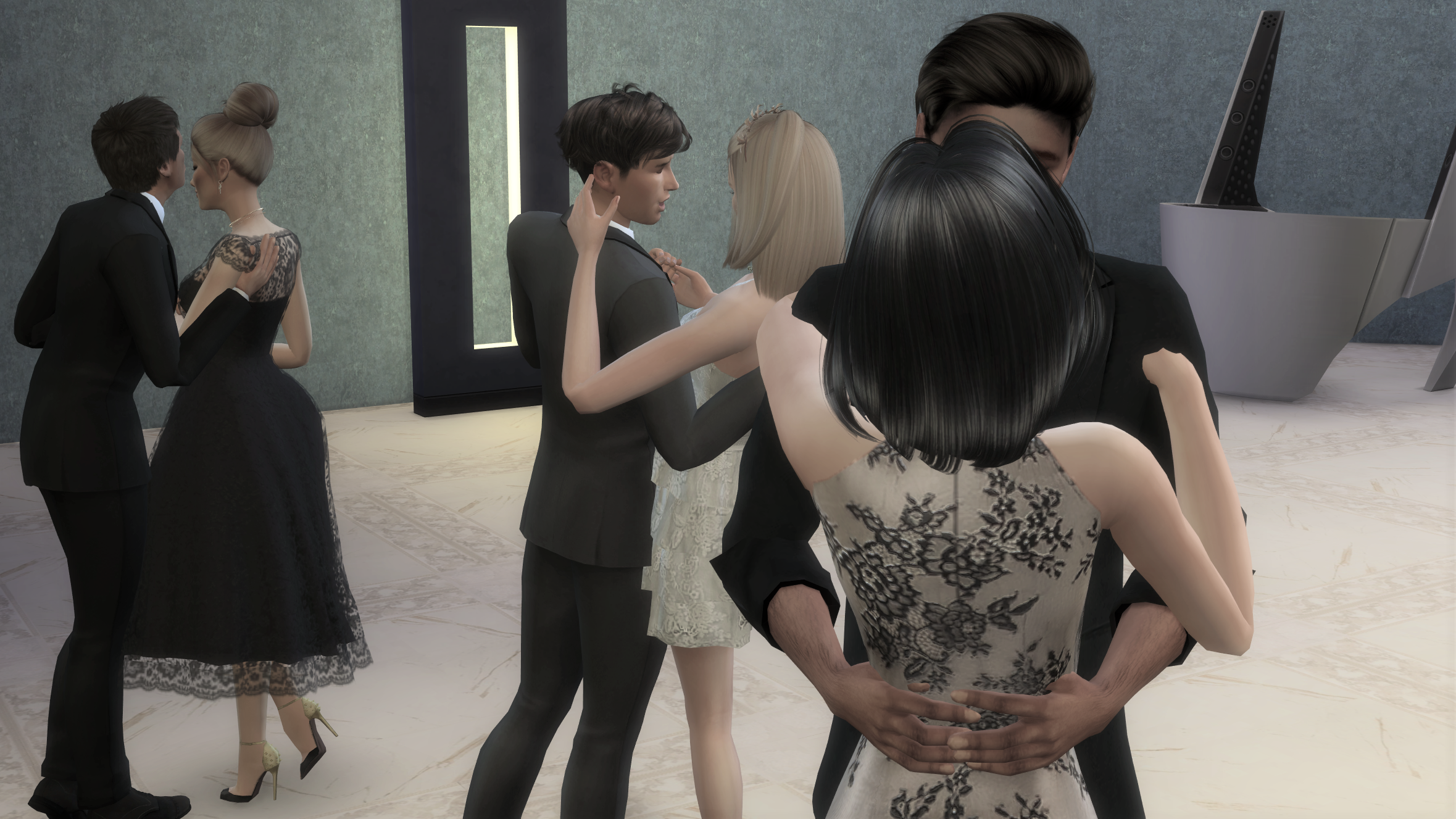 Eventually they needed to get some air. In some quiet corner Eli smiled at Sarah.

“Ready to move in with my circus?”

“At this point I am just trading one circus for the next. And to answer your question, frankly, is a girl EVER ready to move in with her in-laws? Especially if they already got off on the wrong foot.”

“They like you. A lot. Especially my mom. All those dinners and lunches and what not they all dragged us to with your parents made sense. At least your dad quit looking at me like he is just waiting to catch me alone in some dark alley to show me what he really thinks of me.” Eli snickered, as Sarah laughed.

“My dad is not like that at all. All growl and no bite. It’s my mom you have to watch out for.”

“Oh good, that makes me feel much better.” 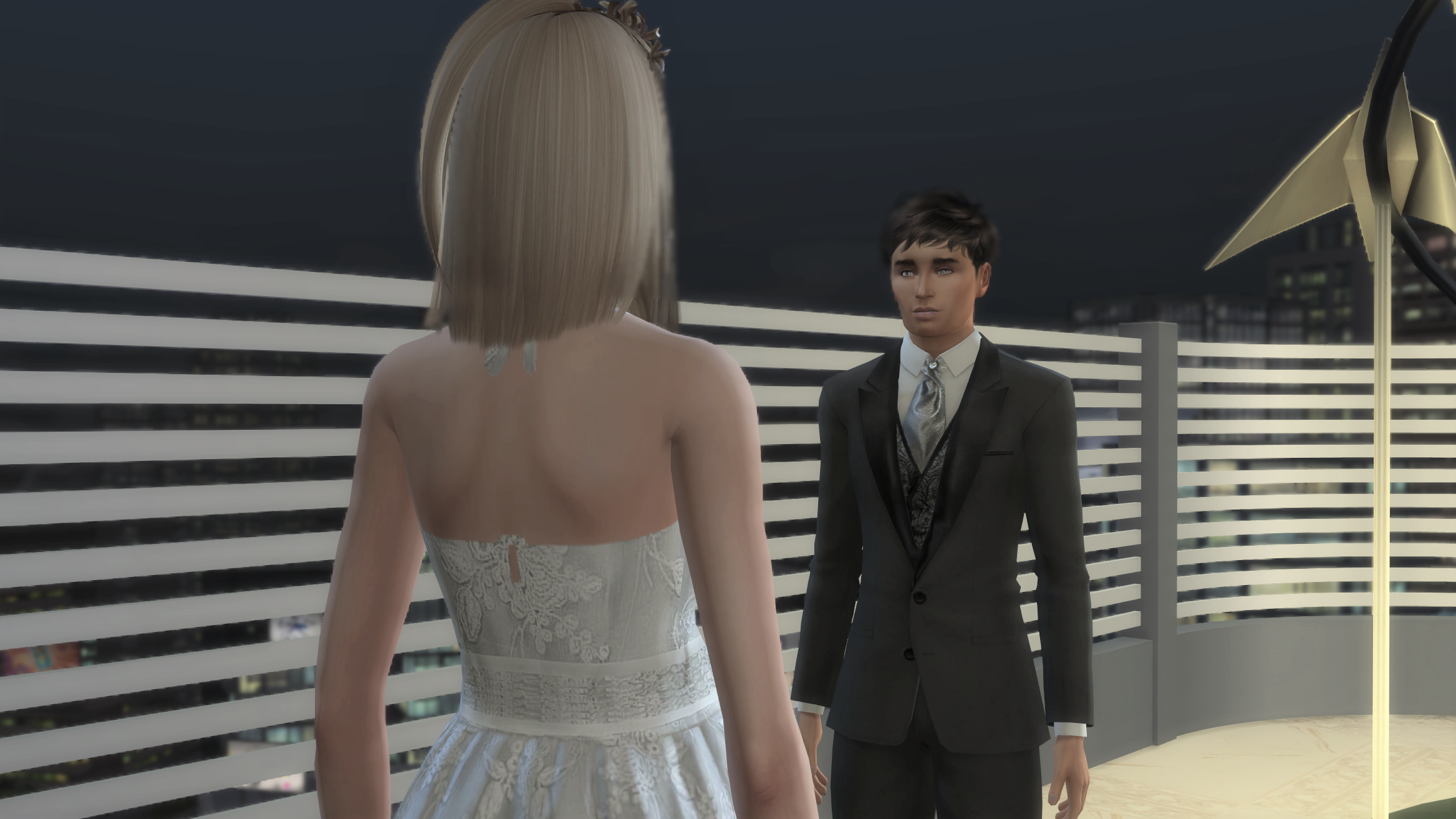 “Relax. You’re safe now. They would never want me to be a young mom and a young widow.”

“I cannot believe I just got married. So surreal. Does this feel real to you?”

“If you had a 10 pound watermelon hanging from your midsection it would feel a helluva lot more real to you too. Ugh. If late term weddings had a Yelp page, I would give a really shoddy review.” 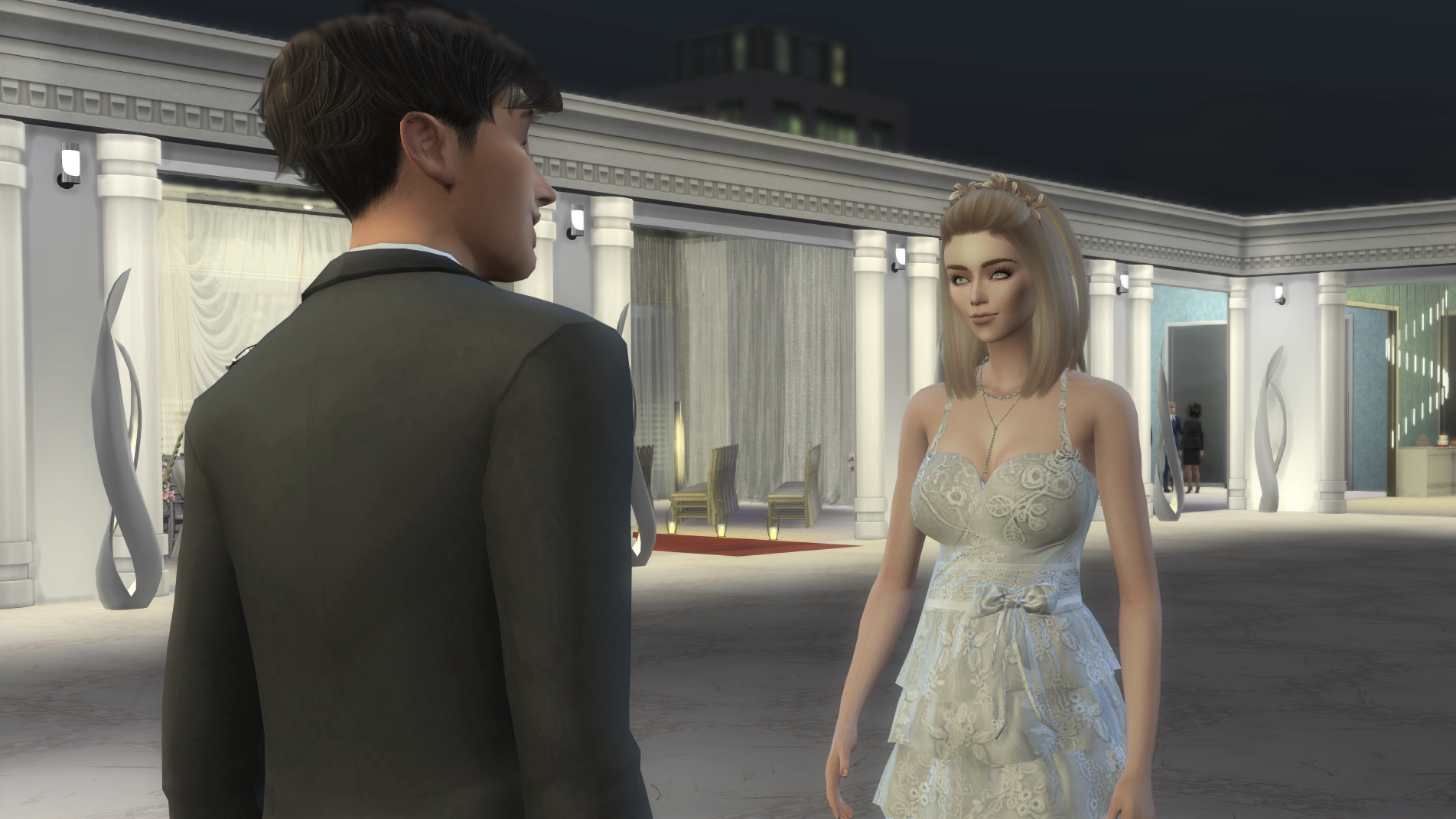 “We cannot go home. This is our big day, supposedly.”

“Exactly, OUR day. We did our duty, said yes, cut and ate cake, posed idiotically for pictures nobody will ever look at again in about a month or so, we kissed a bunch of ass, our job here is done. Seriously, let’s ditch.” he shrugged as she burst into another round of laughter.

“Oh my God, you are too much! Really?” Sarah asked, evidently wondering if Eli was serious. 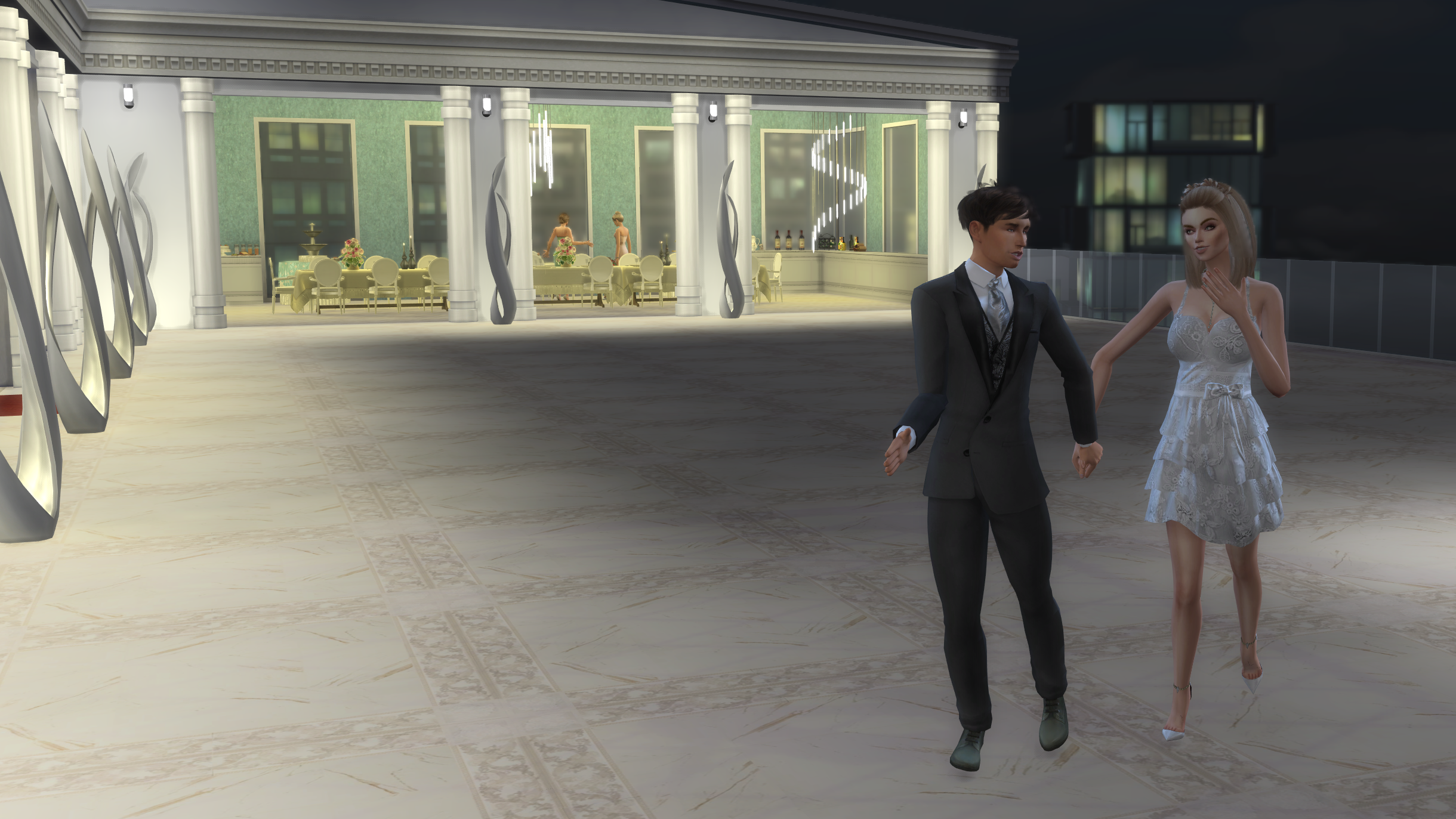 They ran to the elevators, giggling all the way to the taxi stand and still in the backseat all the way home.

Eli even insisted on carrying her over the threshold, which had them in stitches, as he needed to scrape her back along the door to keep it open and them from tipping over, far from as romantic as intended with her added weight and general inflexibility. 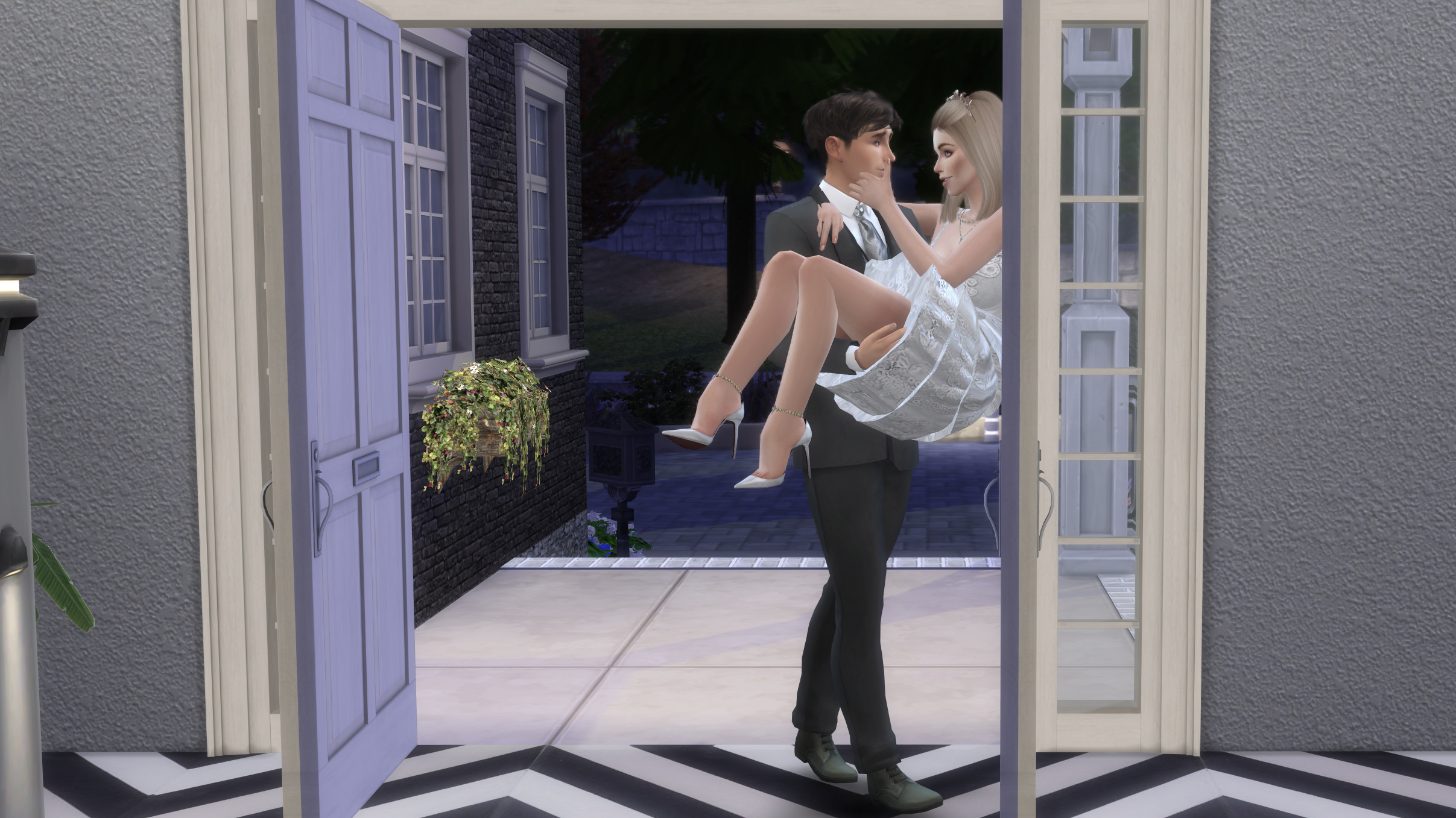 “So what are we gonna do now with this empty house all to ourselves?” Eli asked after they calmed down.

“Honestly, I’d love a hot shower and then fall into a bed. I am so sorry Eli, but I am wiped out.”

“Yeah, I get it. Mom already got everything set up for you, so I’ll meet you in my room, I guess? Our room, I meant.” 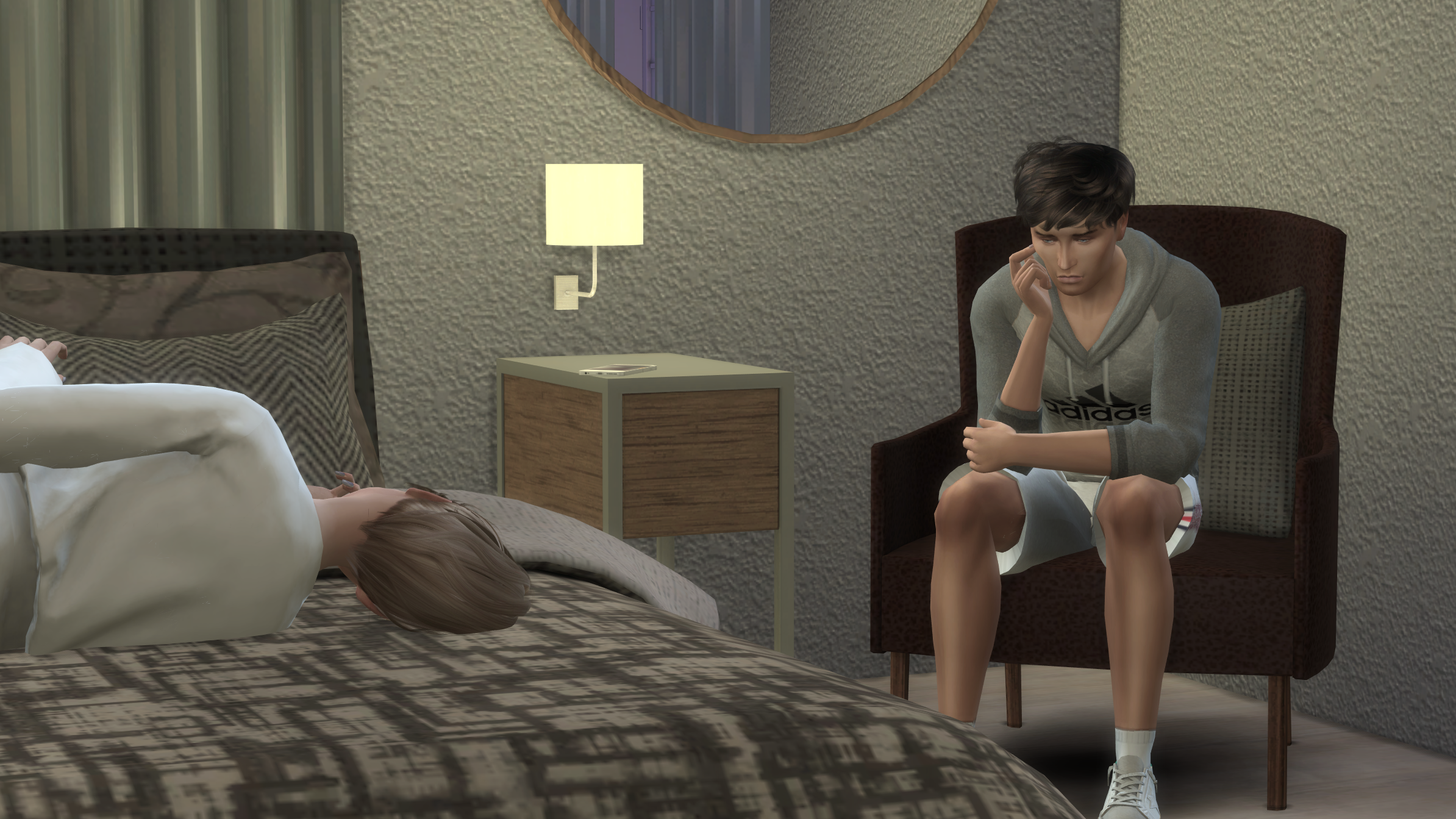 “Dude, you are delish and sweeter than pie and all, but … have you seen me recently? I am not sure I am up to the athleticism it would require for us to consummate our wedded bliss at this point, sorry. I am lucky if I make it out of bed in time every single one of the 3 million times I have to go these days and do not pee myself trying to get up.”

“Hope mom put rubber bed sheets on … just joking. We just got through vowing our lives to each other, if that includes waking me up 3 million times at night to help roll you out of bed so we don’t end up land under, so be it. I am a romantic like that.” 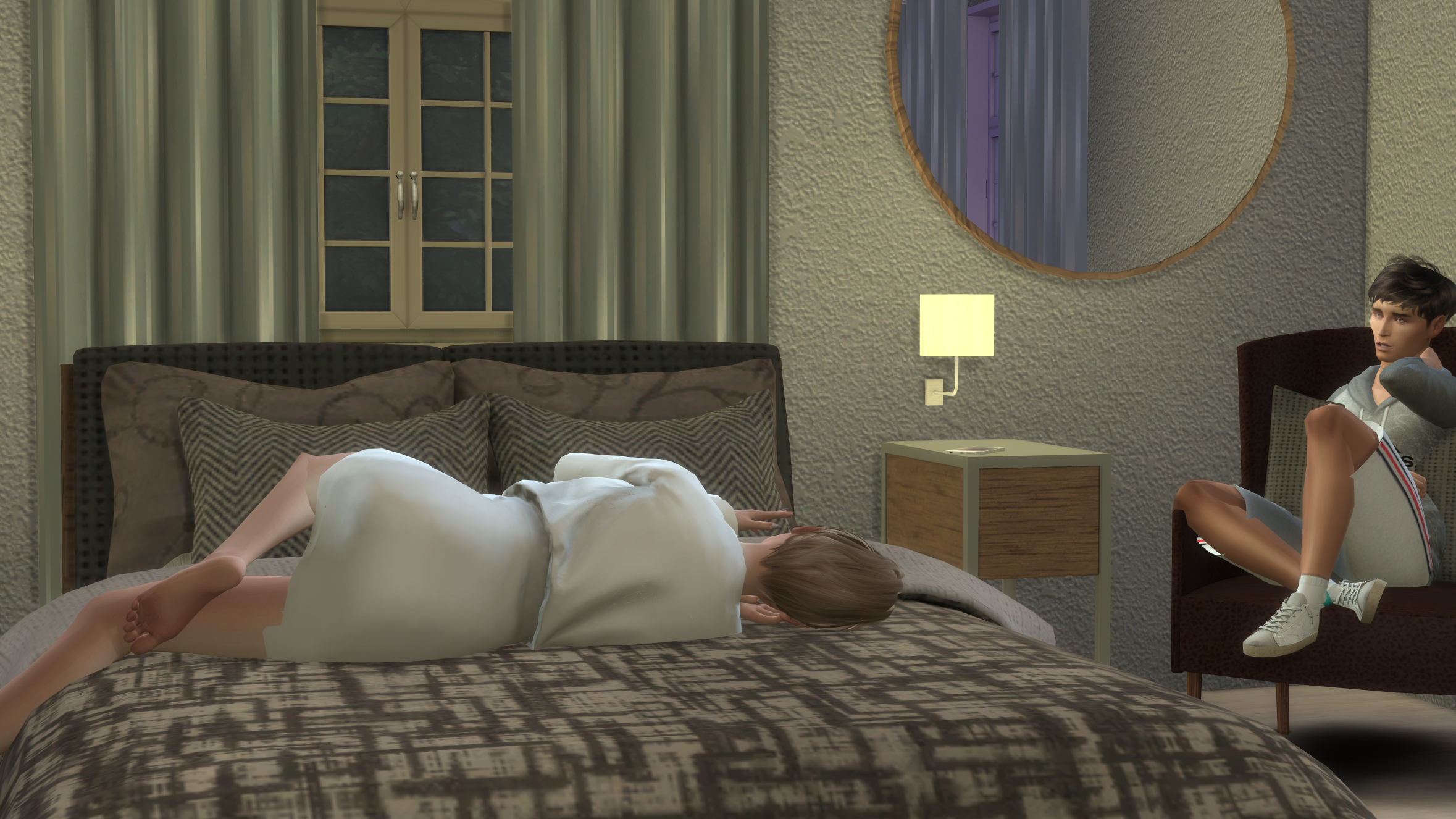 “You are so friggin adorable. But what you could do is come over here. We are married now. Hope you weren’t planning on sleeping in that chair.”

“Had crossed my mind. Just trying to give you space, Sarah. Honestly, I have no idea what is right or wrong in our situation. I mean, I feel like a fool for even bringing that up, you know, the …. sex.” 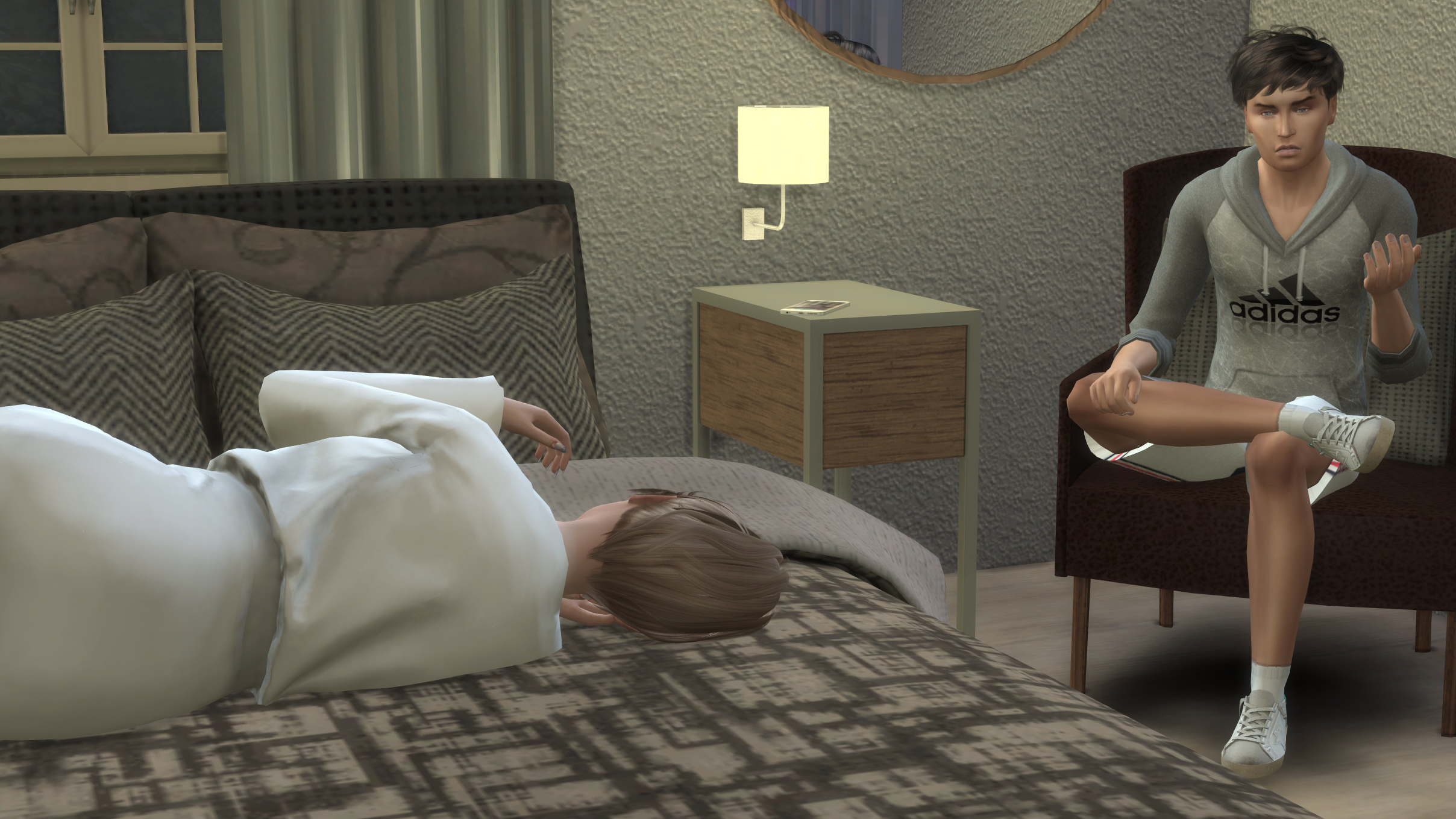 “Don’t be silly Eli. It wasn’t dumb, I was wondering too. I mean, it is kinda expected, right? Truth be told, that whole ‘just friends’ ship sailed centuries ago for us now. And I admit, I was always seriously crushing on you, especially when I realized you are not just another pretty boy looking for a good time. And I did miss you, a lot. Plus, like it or not, we are married now. Might as well enjoy the good with the bad.”

“All right, I’ll come over there, but you keep your hands to yourself, darling. No need getting you double pregnant or something. Knowing my luck, I might even end up preggers.” 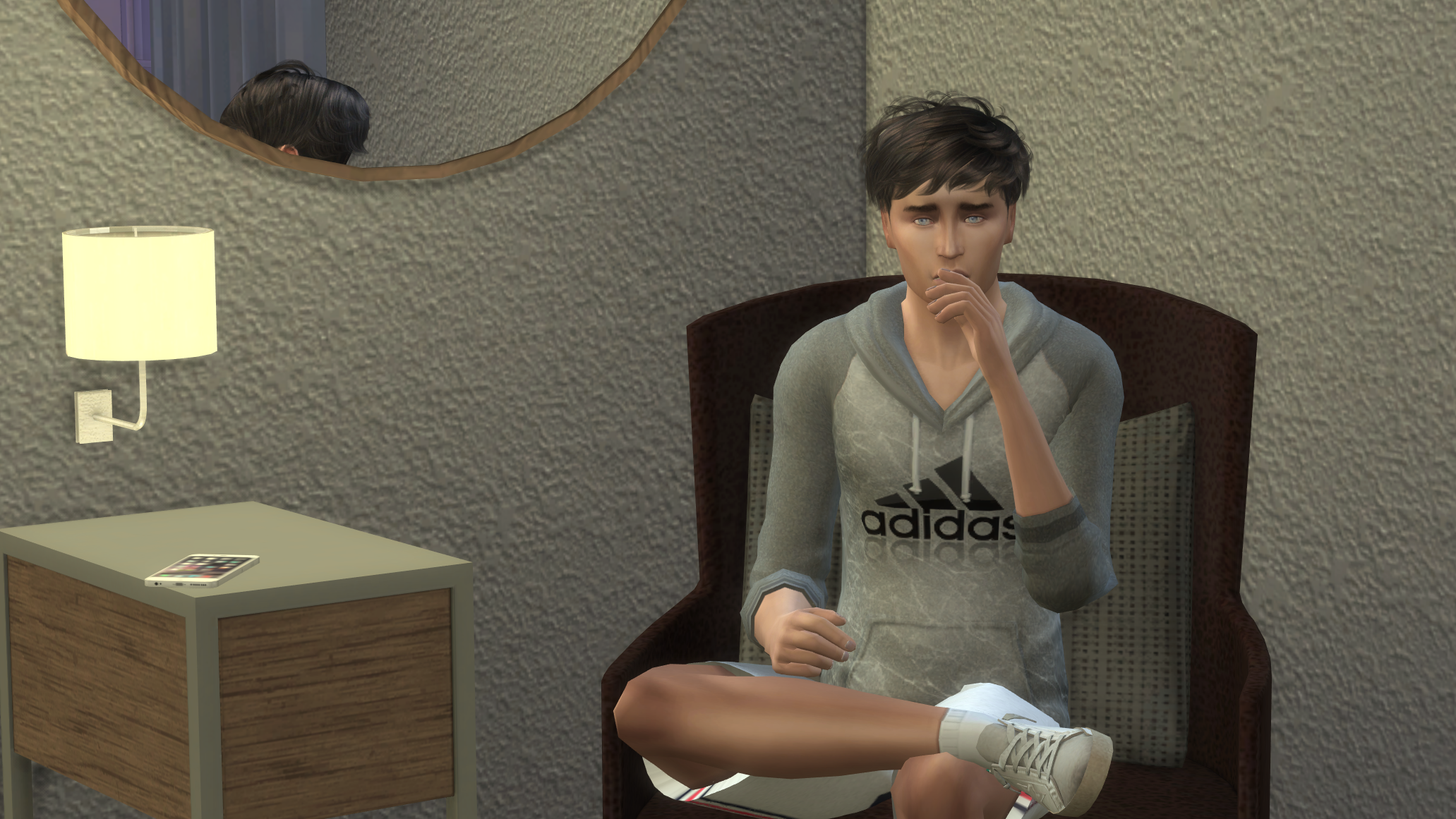 They laughed as he got onto the bed next to her, where they laid next to each other quietly for a while. 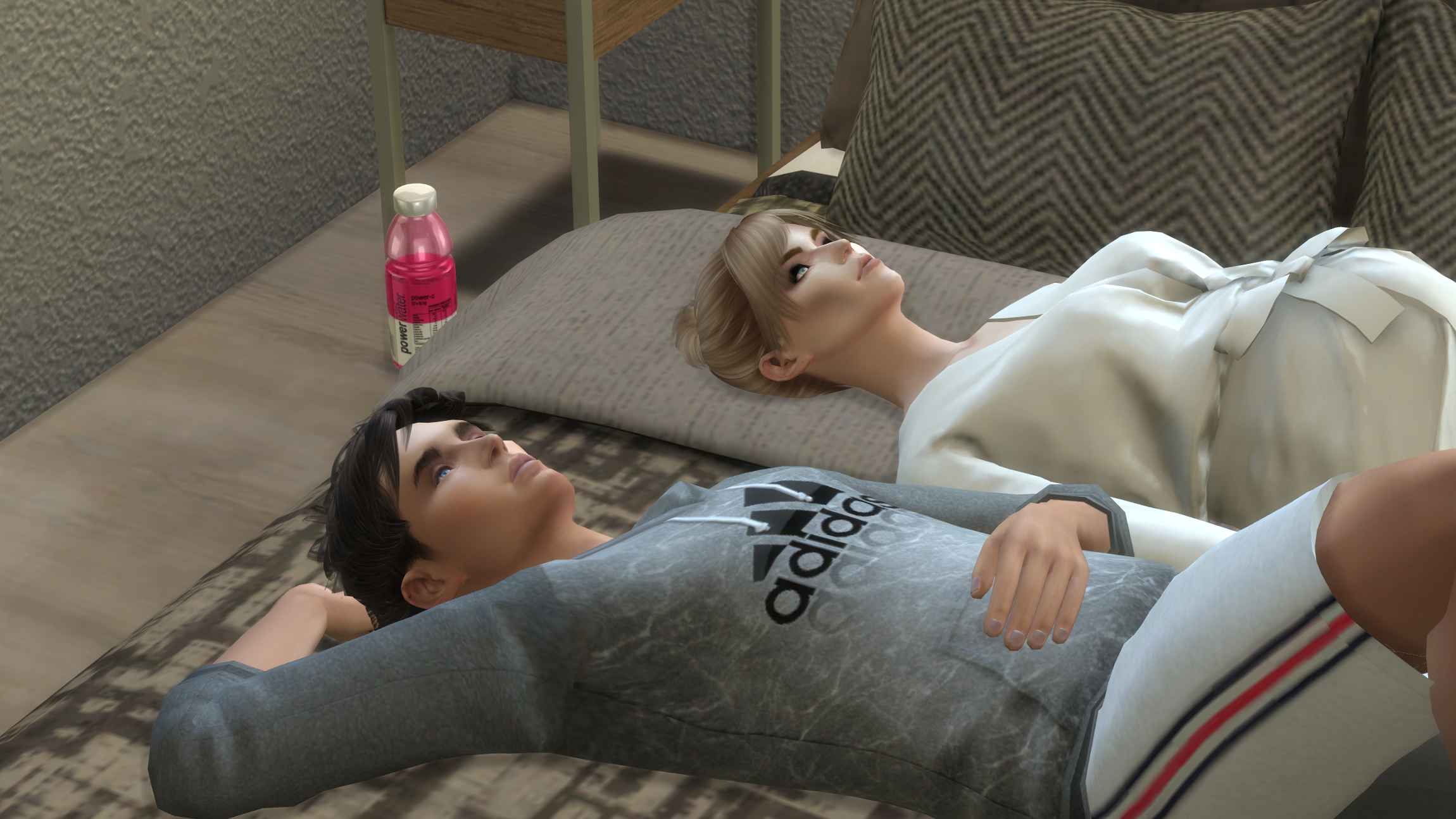 “In all seriousness though Eli, I wish I could, trust me, I would, if for nothing else than to at least have a wedding night like everybody else. Even though this very thing is what got us into this mess to begin with. Fools never learn, right? Oh well, next time we know what to do and how important that is. So, rain check for tonight? Really sorry Eli. I am seriously a beached whale once I lay down. The most extraordinary thing I could do to you right now is probably blow raspberries on your arm or something.” she smiled. 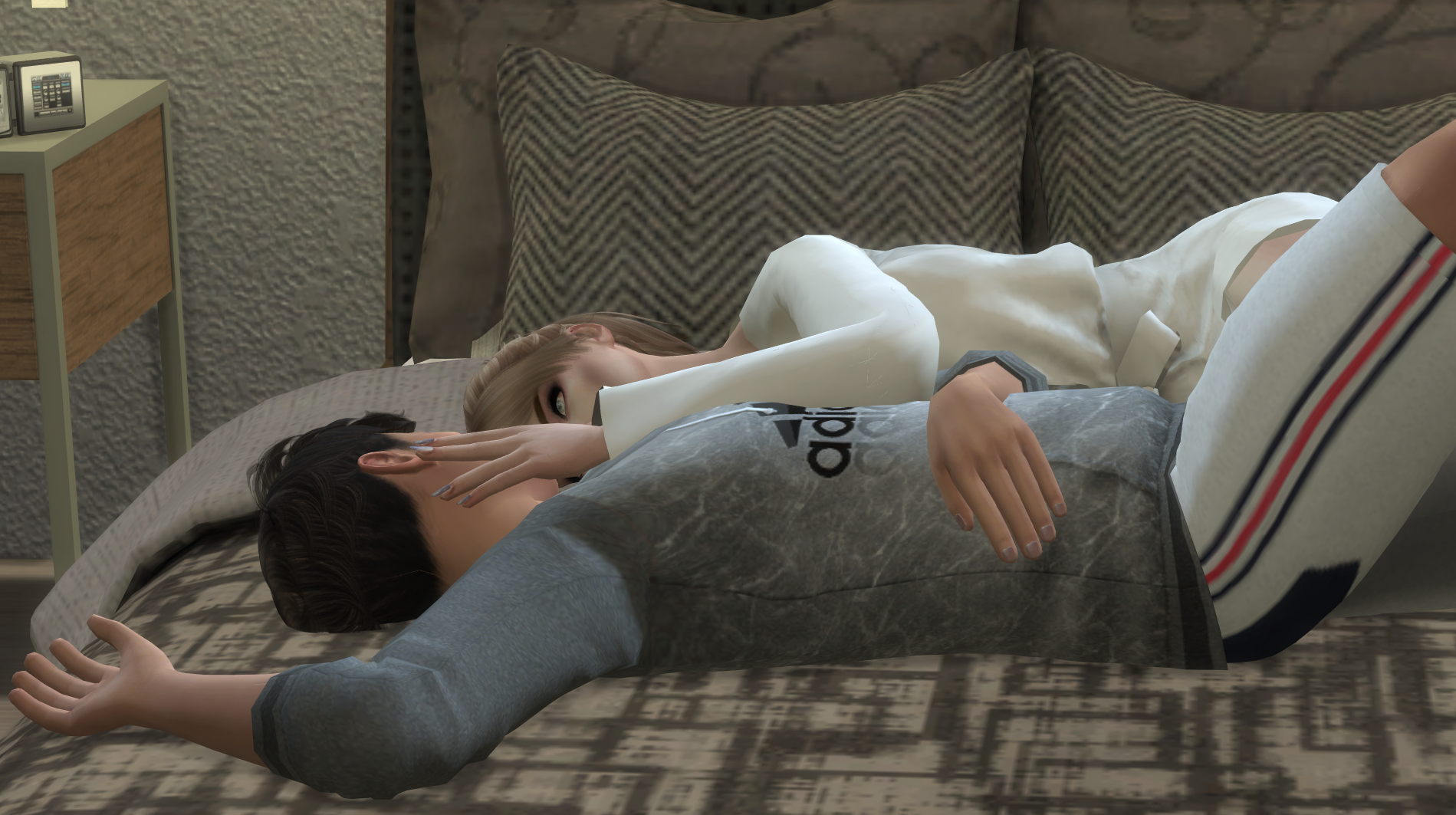 “Nah, that’s okay. Just thought I’d put it out there since it is kinda tradition. If I am perfectly honest I am glad you said no. Really don’t want the first thing my daughter ever sees of me to be my … you know. THAT part of me.” 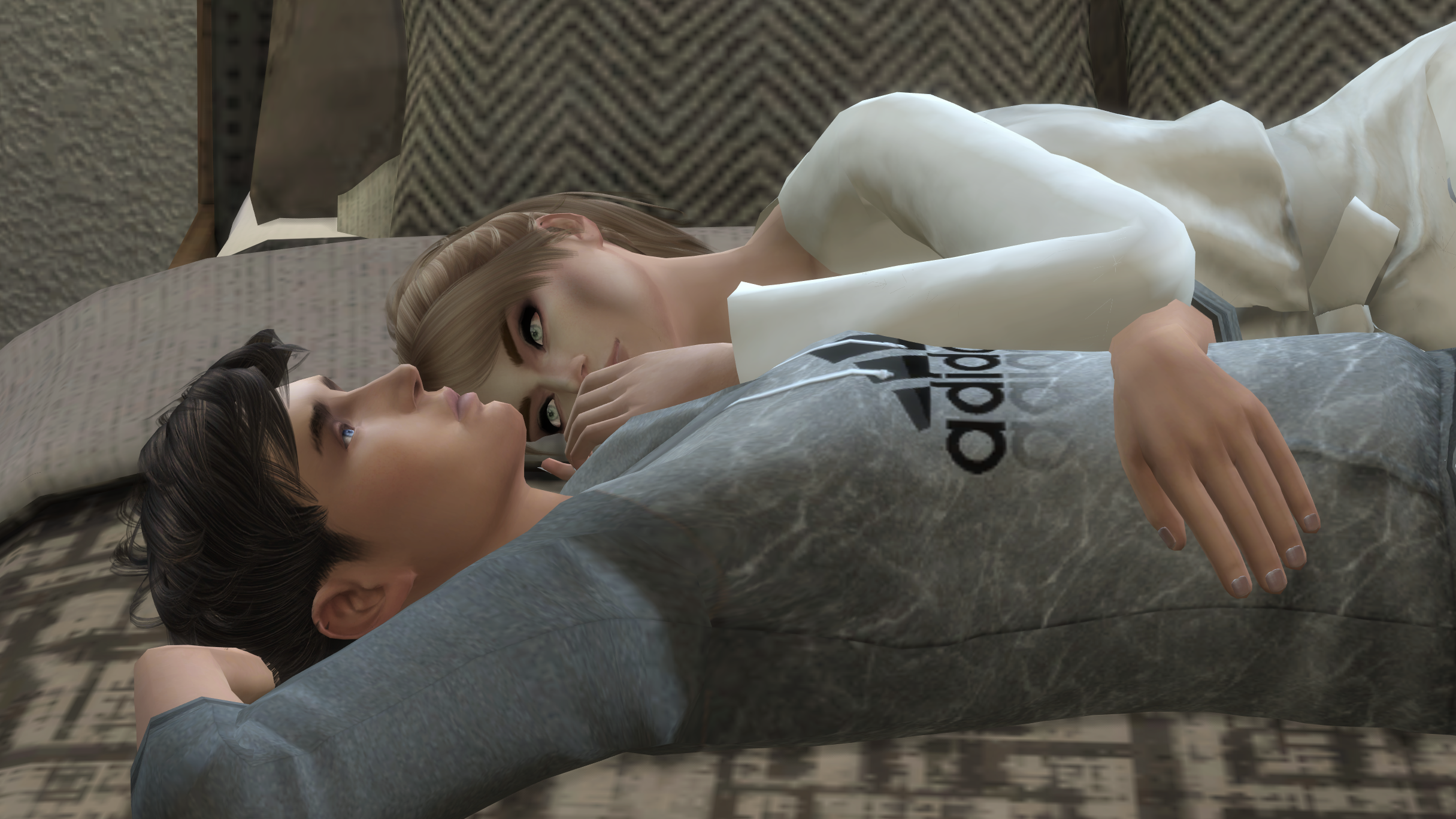 “What? I was dead serious … that would be … disturbing. No father wants that.” 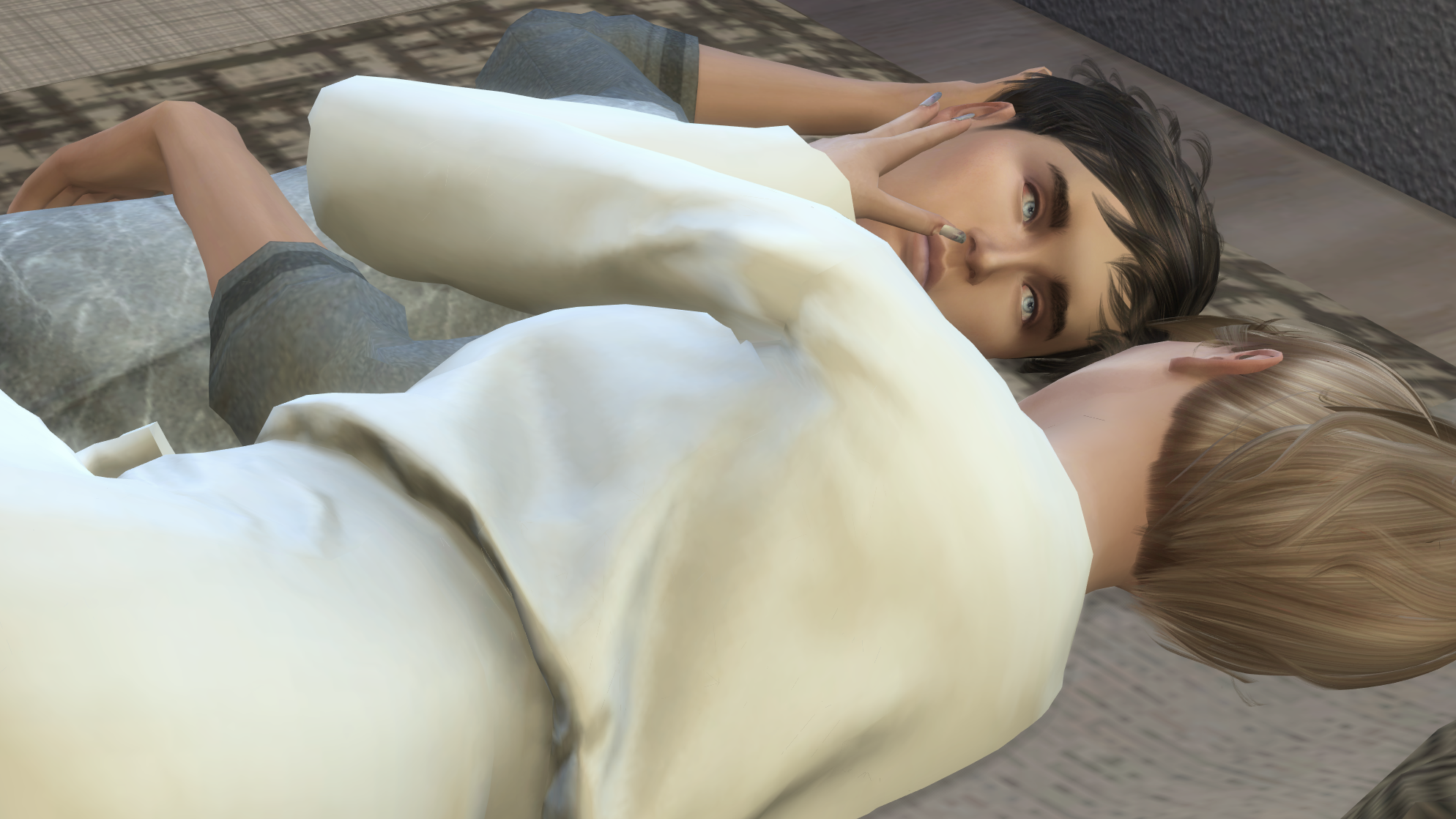 “You are adorable! Oh … ouch ….. ah…” her amusement abruptly stopped, changed to moaning and groaning in apparent pain. After Eli helped her out of bed, there was the telltale water dripping down her legs. 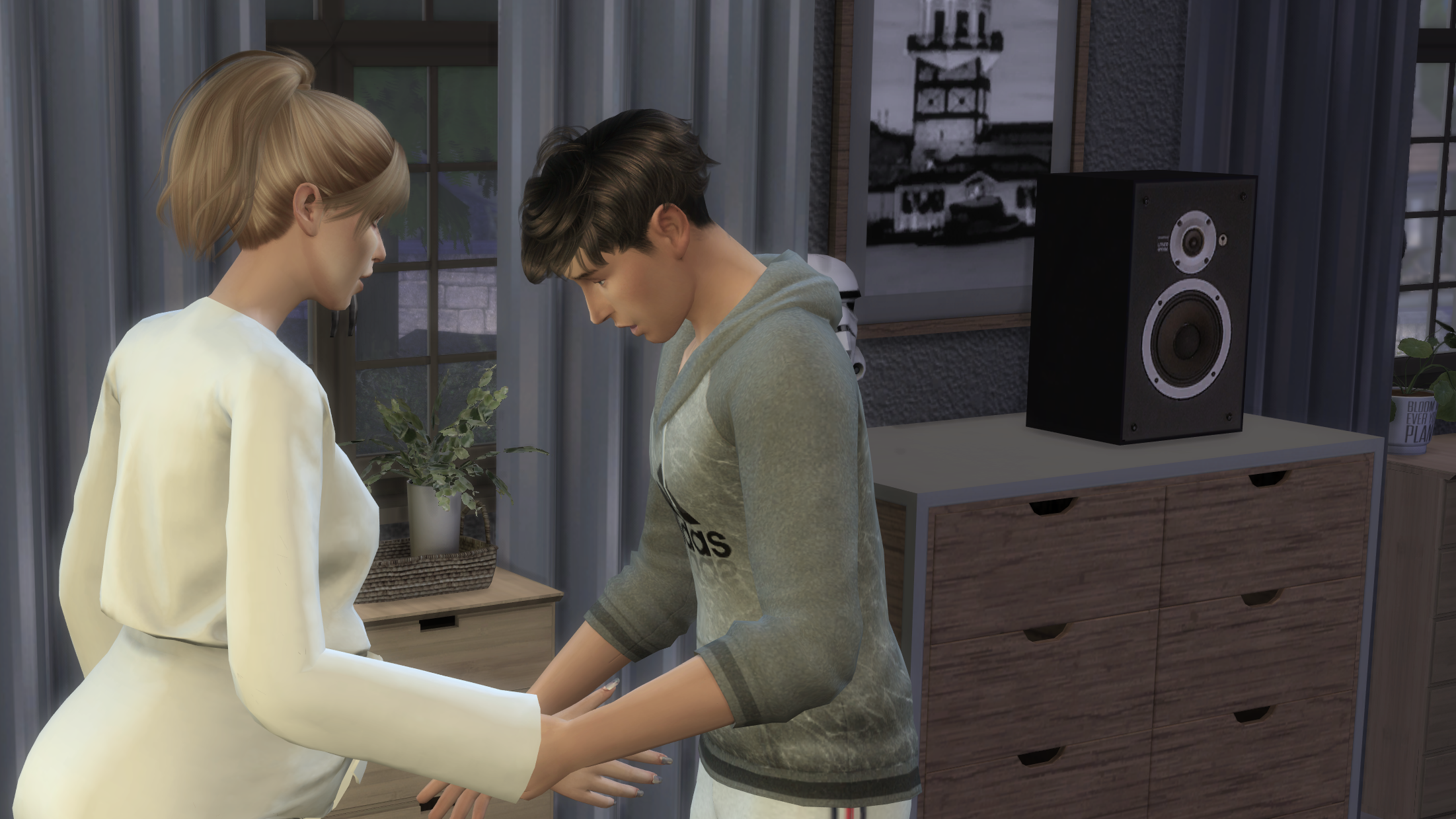 Sarah stiffened and Eli knew right away what that meant.

“Uh oh! Real quick, what are the chances that you accidentally peed yourself.” 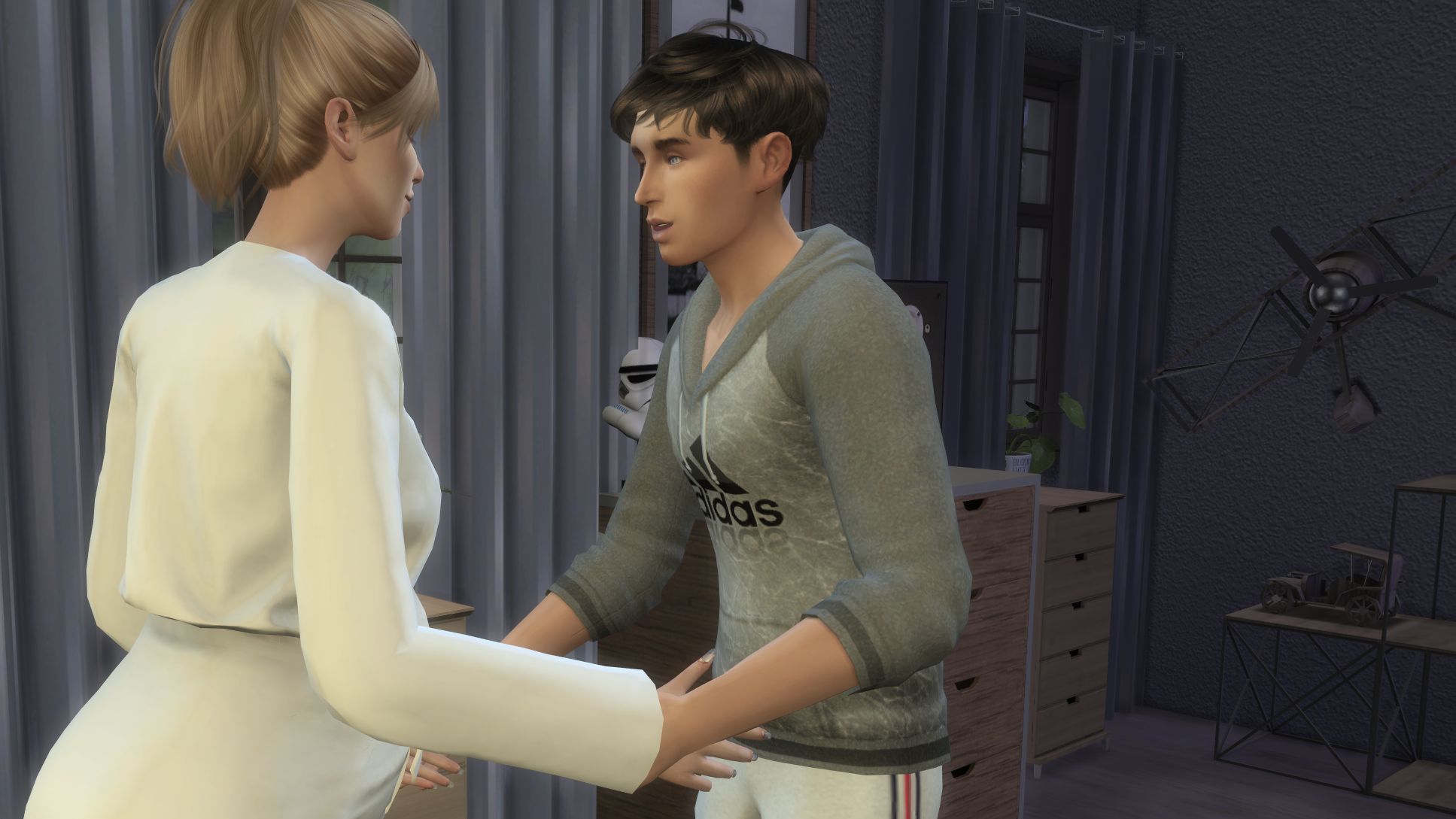 “Eli!” Sarah was no longer in the mood for jokes. 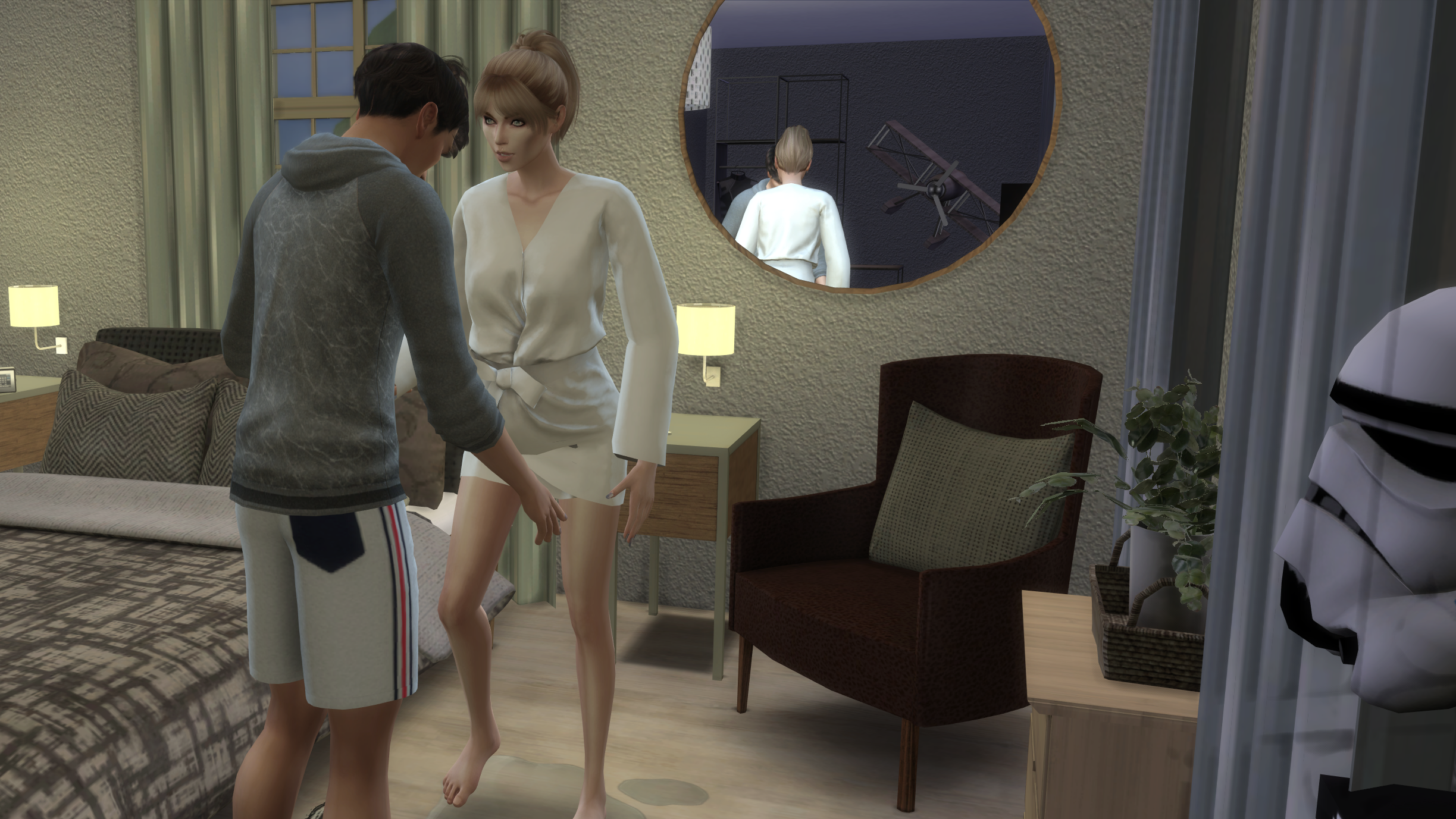 “Shit! I’ll get us dressed, then the car out front. Hang in there, babe!” 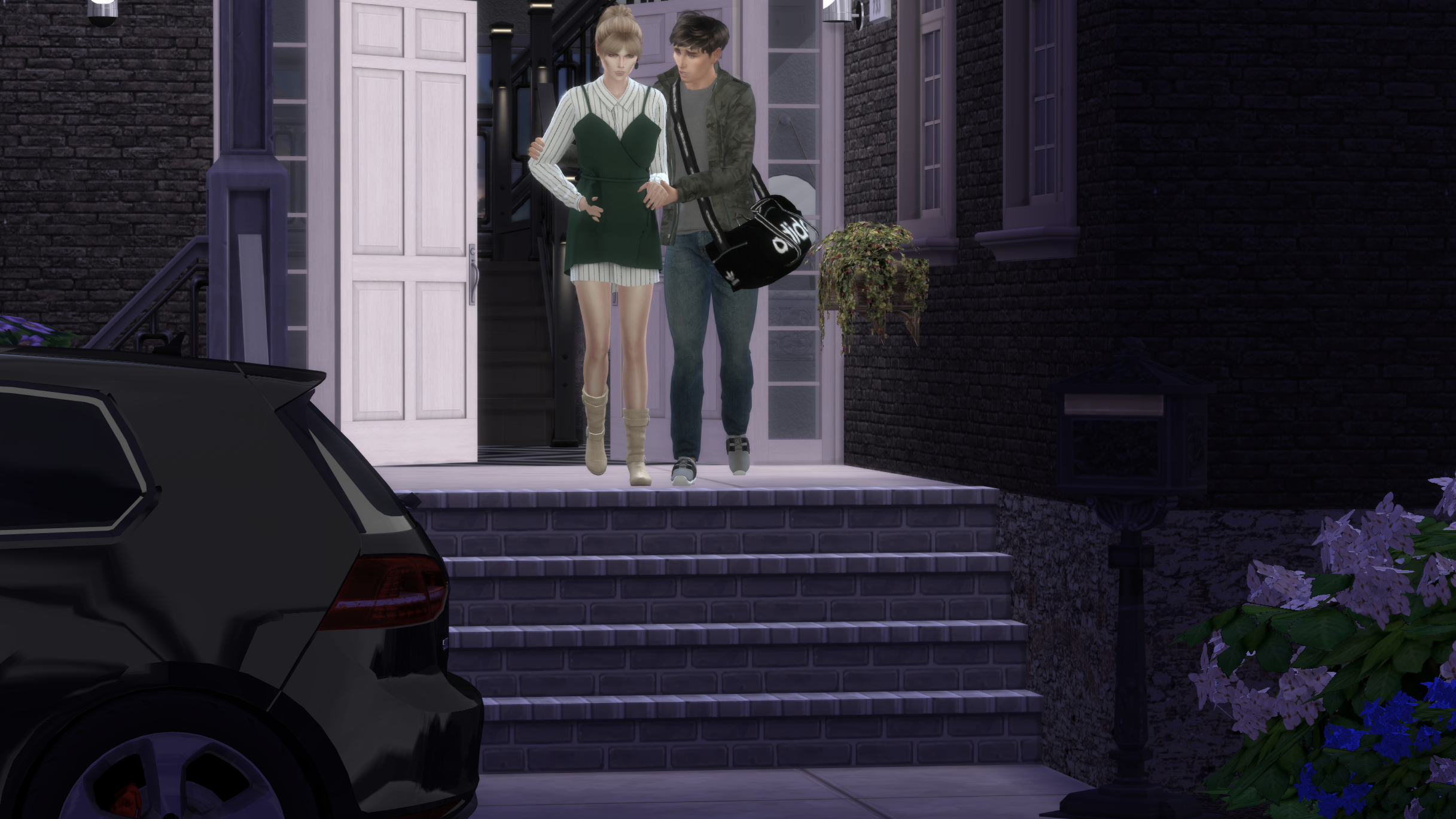 By the time they arrived at the emergency room after a brief check they were immediately hauled off to the delivery room, as Sarah was almost fully dilated. That baby was coming, NOW, ready or not.

On their wedding night, Sarah delivered a healthy baby girl, 10 minutes before midnight, while she was resting Elias had to listen in Dolby Surround Sound to all four of their parents lecturing him about them both just disappearing from the wedding and not calling sooner about the birth.
Elias was still too thunderstruck from having been in the delivery room with Sarah to argue with all the parents, even though he was wondering how and when they’d imagine he had time to call them. 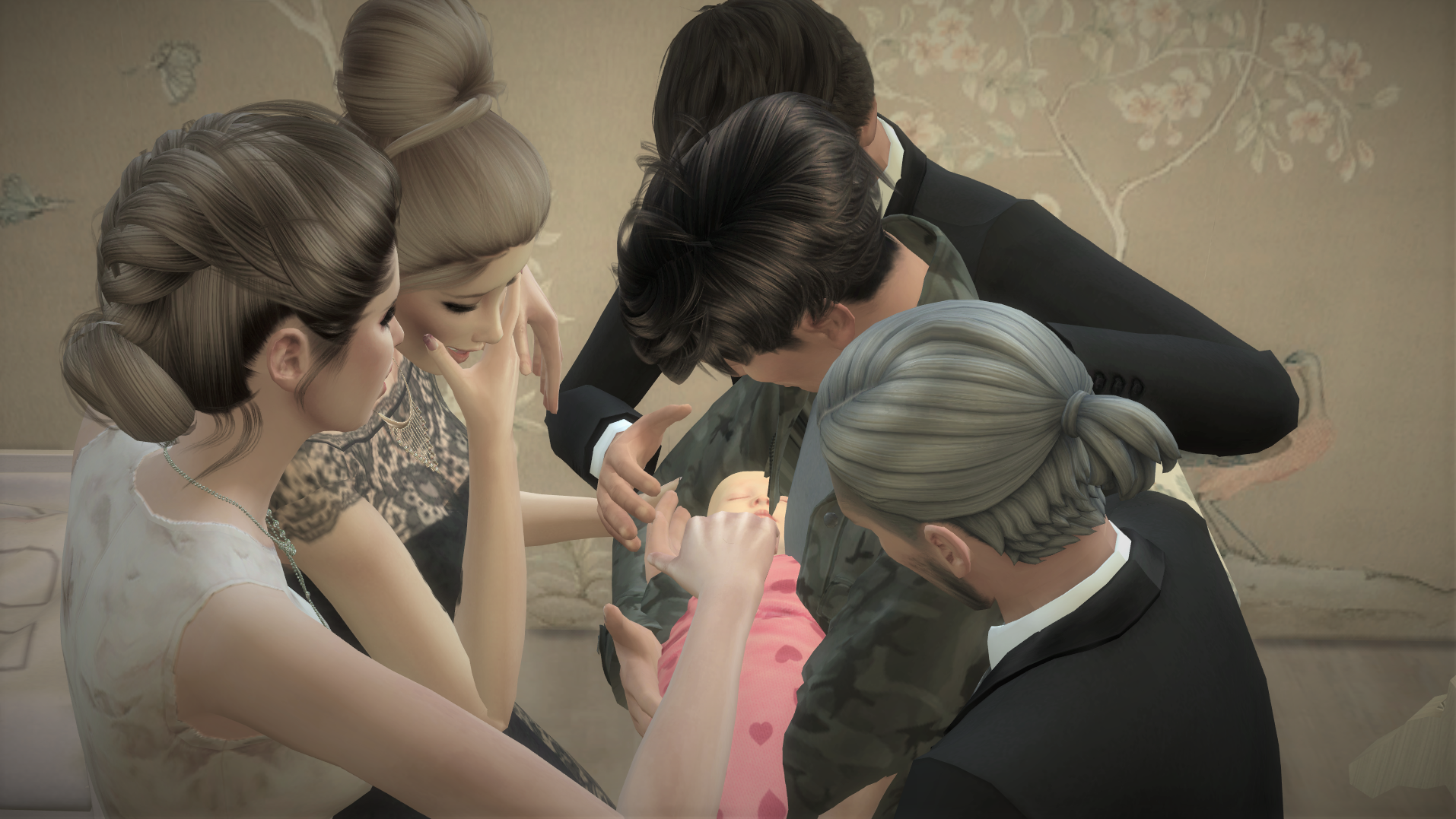