Jealousy, that dragon which slays love under the pretence of keeping it alive.
~Havelock Ellis

It was an overcast, but still balmy day, perfect for some outdoor barbecue as was currently happening at one of the Cameron residences in Brindleton Bay. Eric and Charlotte’s home.

Eric briefly looked up at Sven from flipping burgers.

“What?” Sven sounded as if pulled from deepest pondering, his eyes still firmly on Hannah and Dylan.

“Quit being a creep! You are almost stalker material. Quit staring at her like that. You’re gonna scare the kids. Already creeping out this adult.” Eric told him. 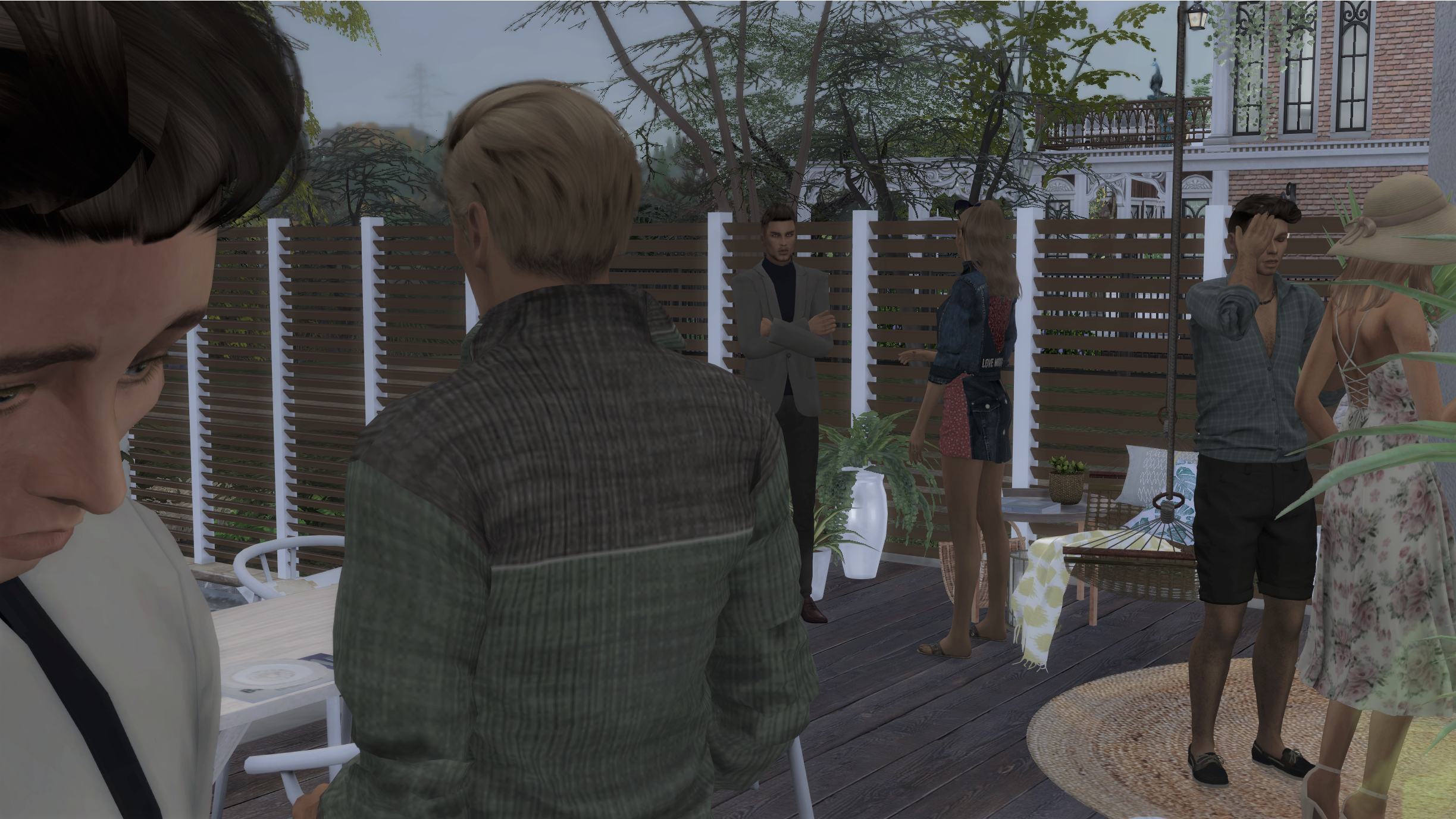 “I am not staring I am … ” Sven tried unsuccessfully to come up with a good excuse – while still focused on Hannah.

“Ogling? Eyeing? Quit all of that, the entire thesaurus worth of staring alternatives.”

“Fine. You got me. But is it really so hard to understand?” he said as he turned towards Eric and away from Hannah and Dylan, who were kissing in the distance.

“Not at all.” Eric admitted.

“Ha, that’s a first. Everybody else seems to know everything better than me these days and would have done everything completely different. Begs the question where all that good advice was while I was messing up.” Sven sighed and turned back around to his original position, eyes on Hannah. 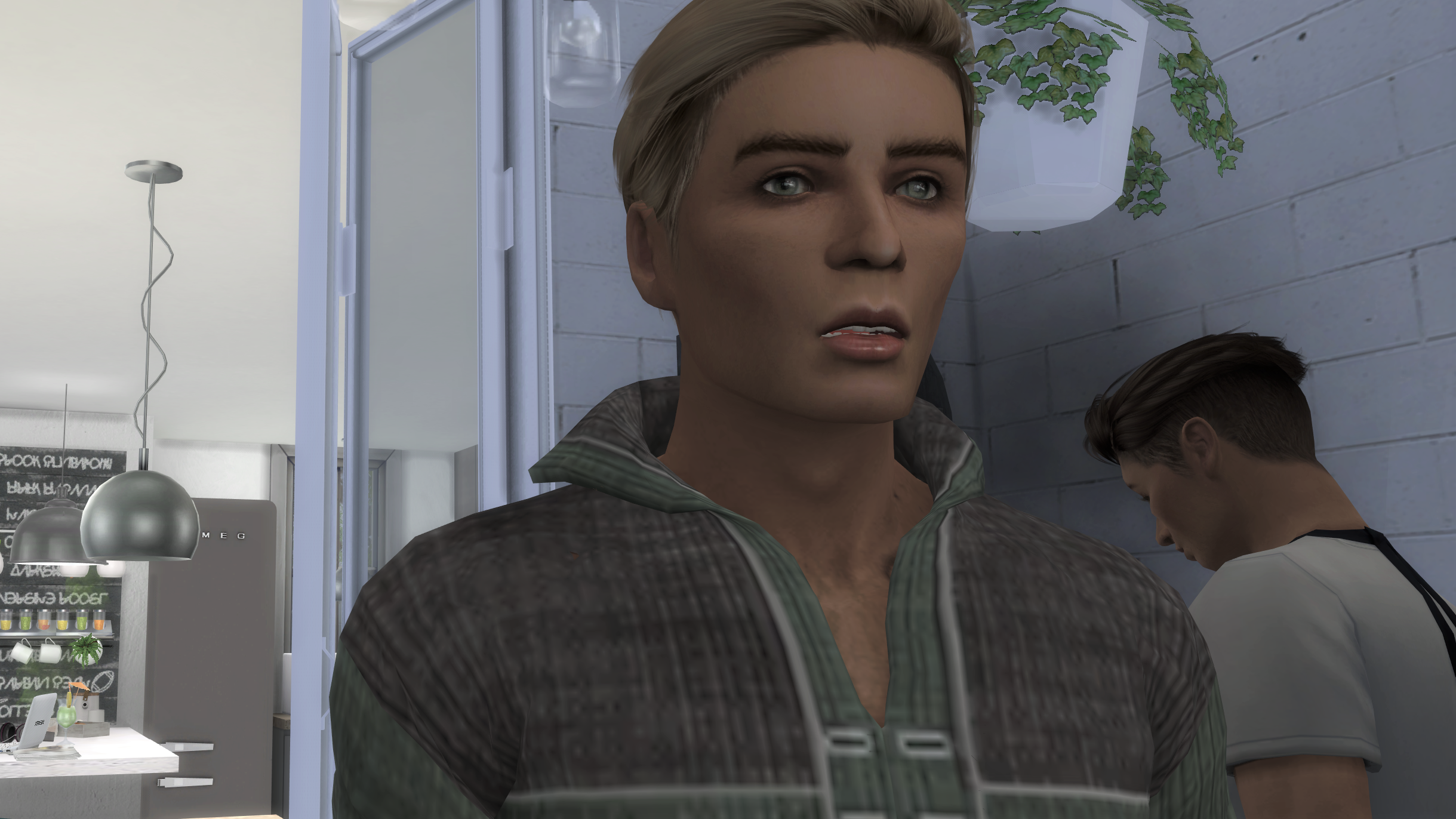 “Everybody’s an expert when it doesn’t affect them. And some things you did, nobody should have to tell you were wrong. Sven, look. Nobody here present is without their own sob story build firmly on a foundation of bad choices. We all had to overcome some rough stuff to get where we are now. Some of us have arrived and are coasting along, some are still on their journey. It ain’t over, till it’s over. Just remember that.”

“What are you two bitchez talking about? Better be about the food almost ready cos I am famished!” Ewan noisily arrived, immediately fishing some of the food Eric was cooking off the grill and stuffing it in his mouth after blowing on it.

“Hannah.” Eric told him while swatting at him, Ewan smacked the food already in his mouth loudly at him before turning to Sven, and telling him

“Yeah …  Can’t believe you agreed to the divorce just like that. Ouch.” 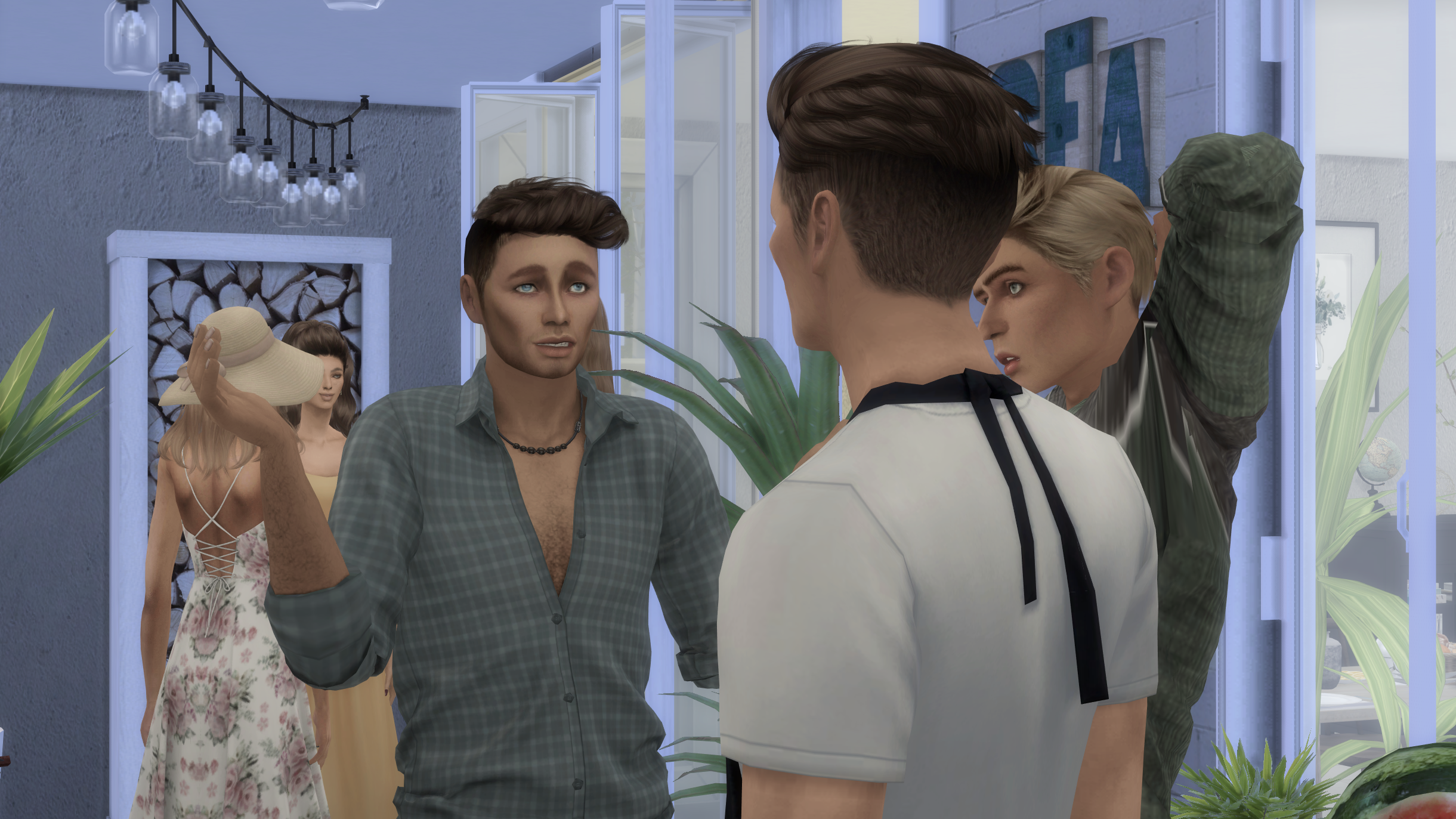 “Seriously? What was he supposed to do, you relationship guru? Lock her into the basement until she agreed to stay married?” Eric helped Sven.

“Even that would have been a better option than to just roll over and show his belly to the next dude! As a matter of fact, what you should do right now is go over there and just French kiss Hannah, right in front of Dylan and all of us. Or better yet, take her by the hand inside to one of the bedrooms and remind her …” 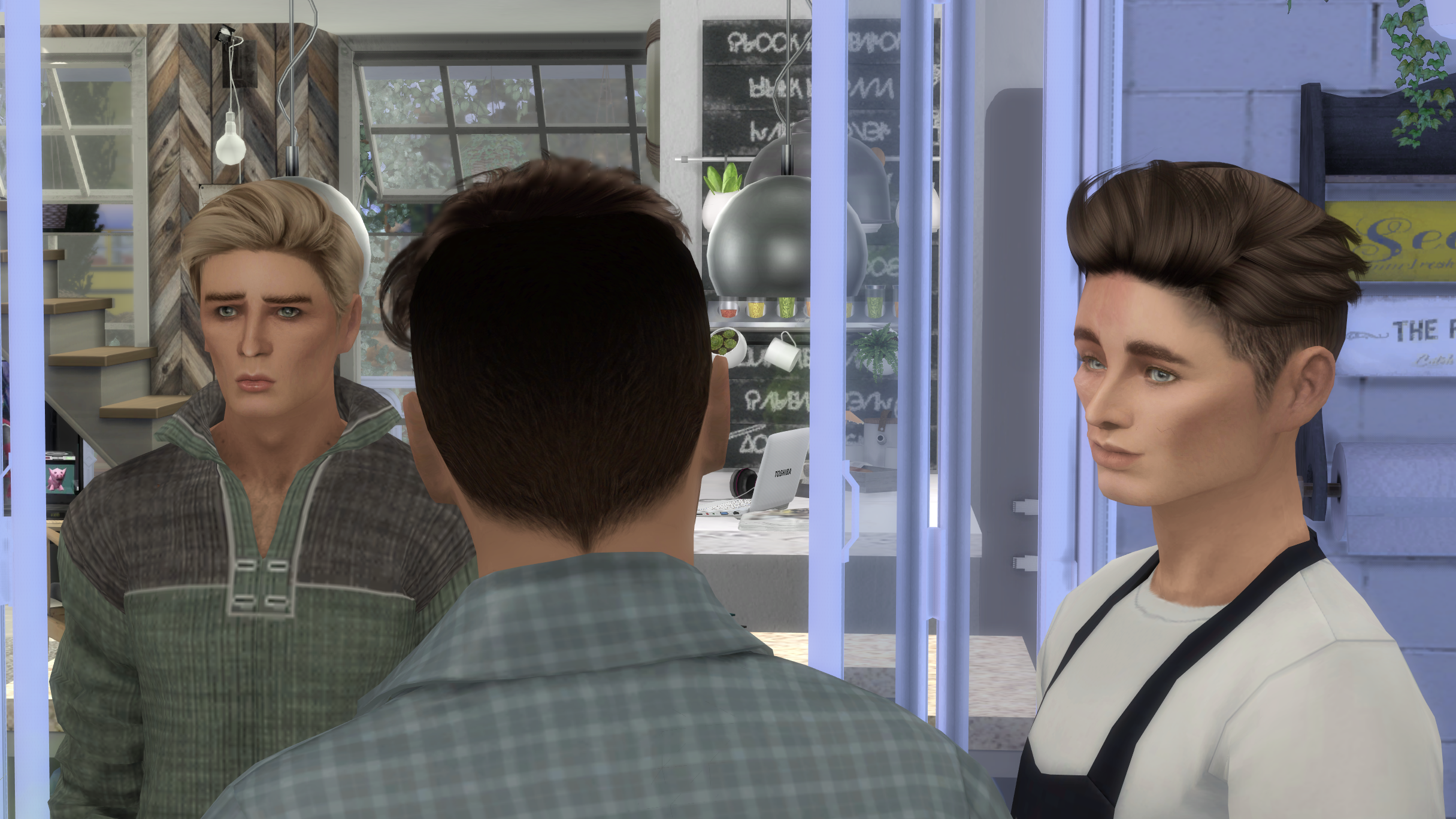 “Hey hey hey … slow your roll, Ewan! This is neither one of your flicks, nor your house, man! We do not have 5 million bedrooms like you do, we have exactly two, ours and Jamie’s, and neither Charlee nor I would appreciate them going for a roll in the hay in our bed, let alone our son’s. Besides – if he really were dumb enough to do that, Hannah would punch him out – and if she wouldn’t, Dylan would for sure – and have every right to!” 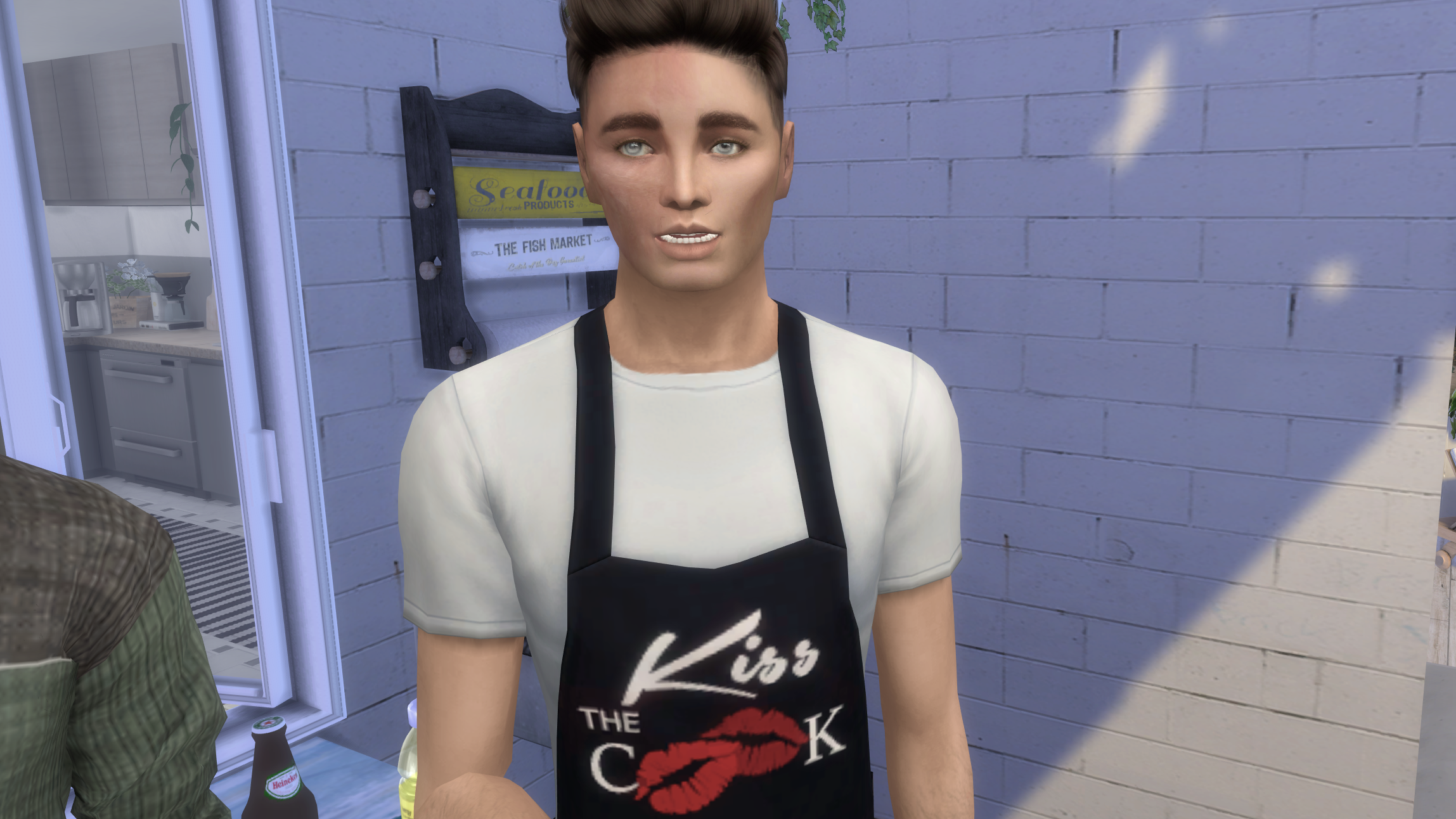 “You’re just trying to get me into deeper shit out of revenge. As if I am not far enough on the outside looking in by now.”

“Wrong! Firstly, I do not fight cowardly. If we still had a problem, you and I, you’d know. You have always known where you stood with me. And secondly, I am team Sven. Ask the human truth serum there.” Ewan pointed to Eric. 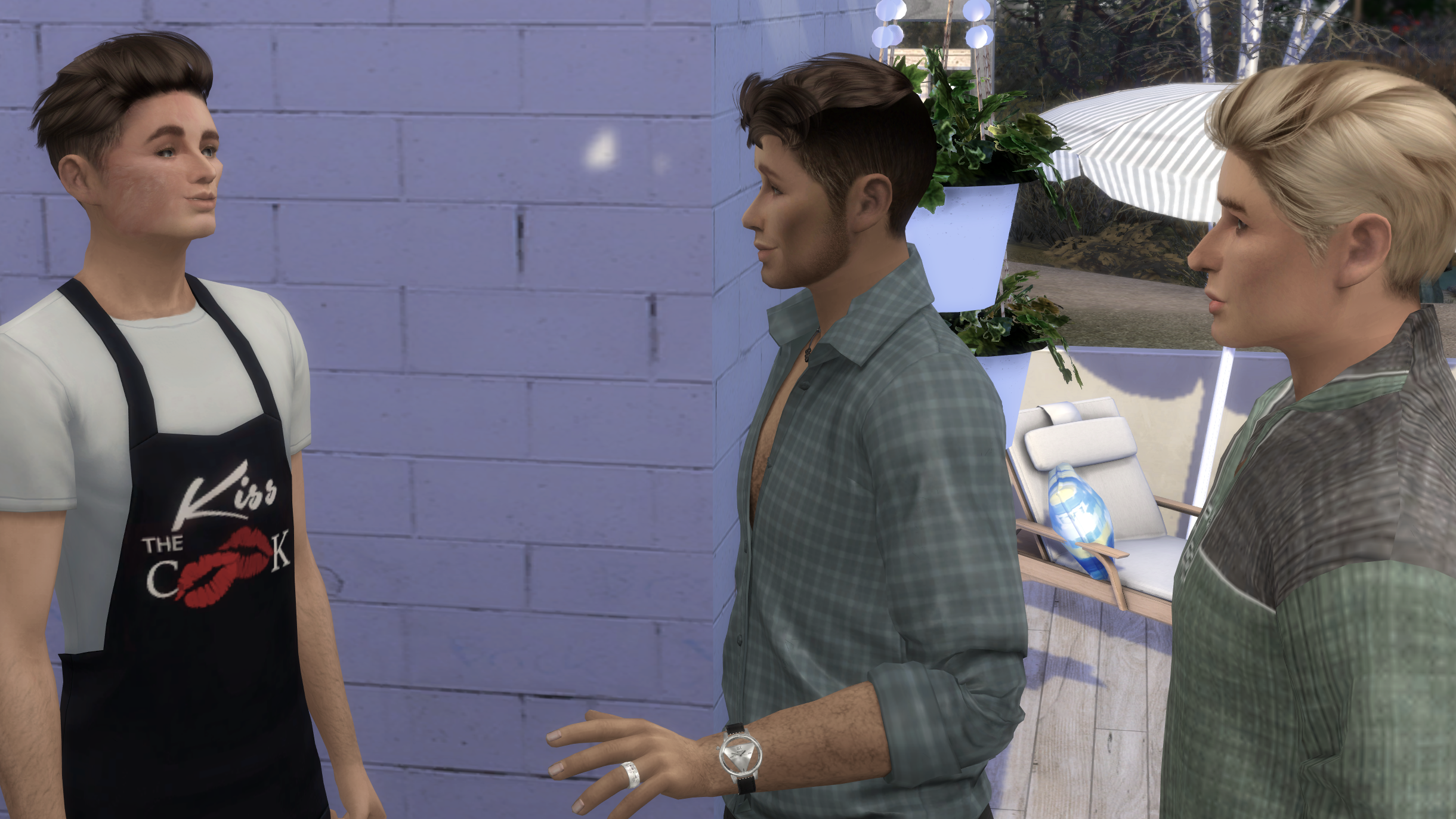 “It’s true. He has been pretty openly rooting for you, Sven. I let him give you the list of problems he has with Dylan now, when the rest of us think he is pretty all right. And Ewan really wouldn’t lie about not liking you. That being said: don’t go over there and definitely don’t do what he suggested. That may work if you were a celebrity like him, for us mere mortals, that is a terrible idea.” 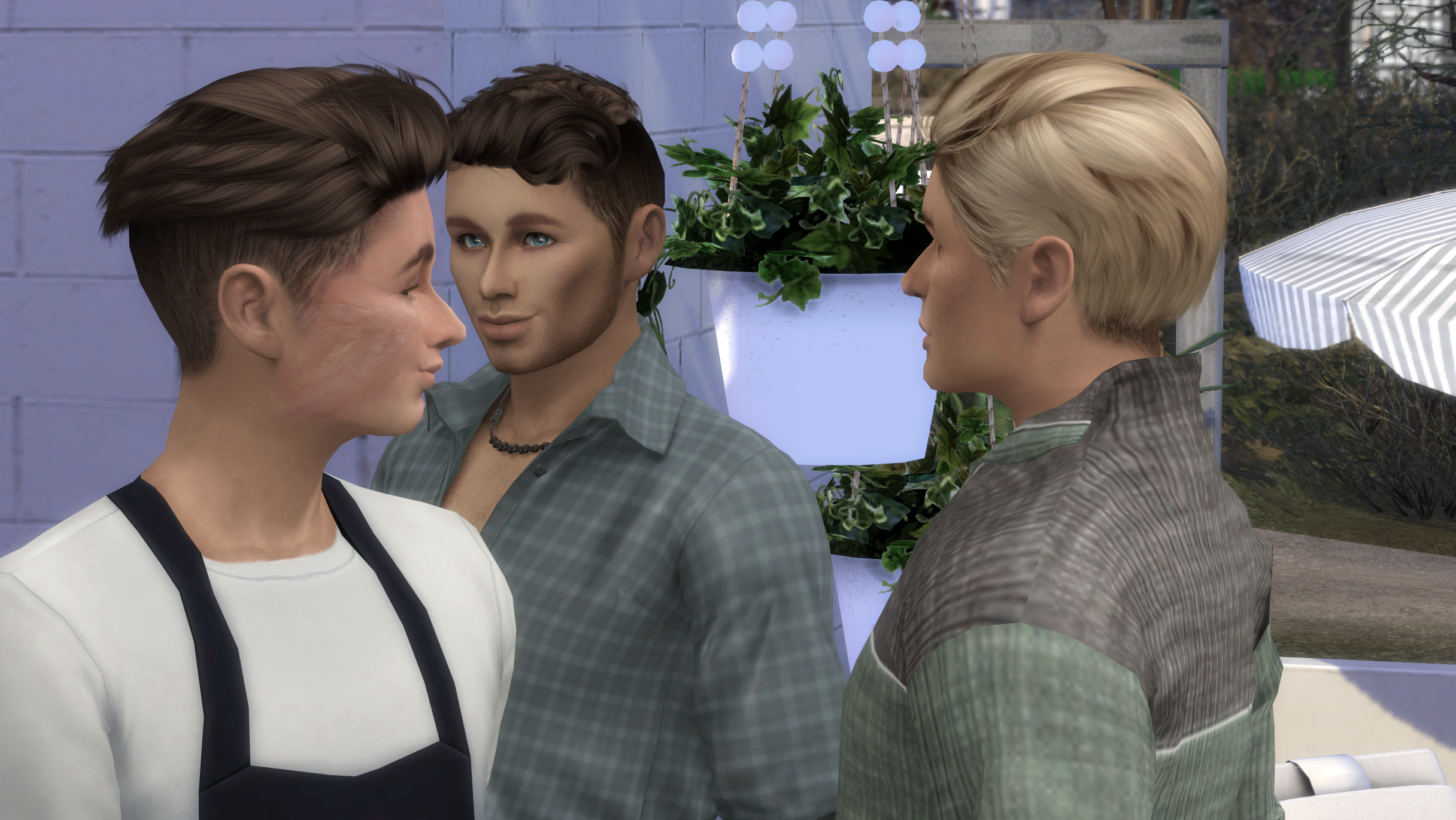 “Those were very special and different circumstances and also a misunderstanding. That would never work again. But I agree, I don’t think you need to give up just yet. It’s a divorce, not a death sentence.”

“So you do not hate me anymore?” Sven wondered in Ewan’s direction.

“Nope! Why the hell would I? Look at my life. Look at that little wifey of mine and my kids in my beautiful mansion, oceanfront in my place of birth right next door to my parents and in walking distance to anyone that really matters – except Bri! I would have NEVER had all this with Cassandra! I should be French kissing you for humping my ex.”

“Please spare us.” Eric said before turning back to tend to the burgers. 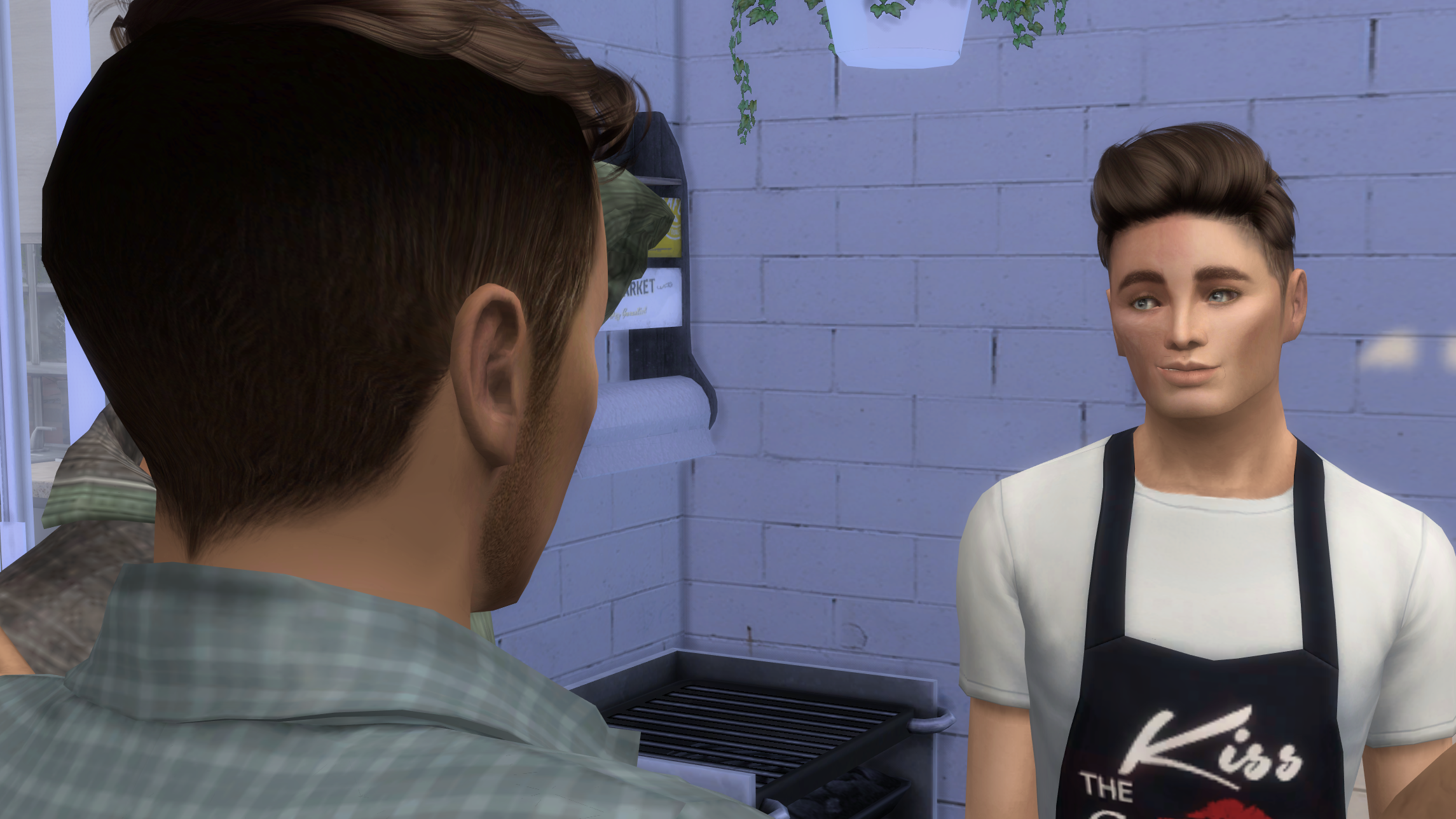 “Ewan – no! Just no! And Sven, do NOT listen to anything following whenever he says anything about plotting and planning.”

“Fine, what is YOUR recommendation for him then, oh wise one? Wait until maybe in some decades from now Dylan dies of old age and then go after his second chance with Hannah?” 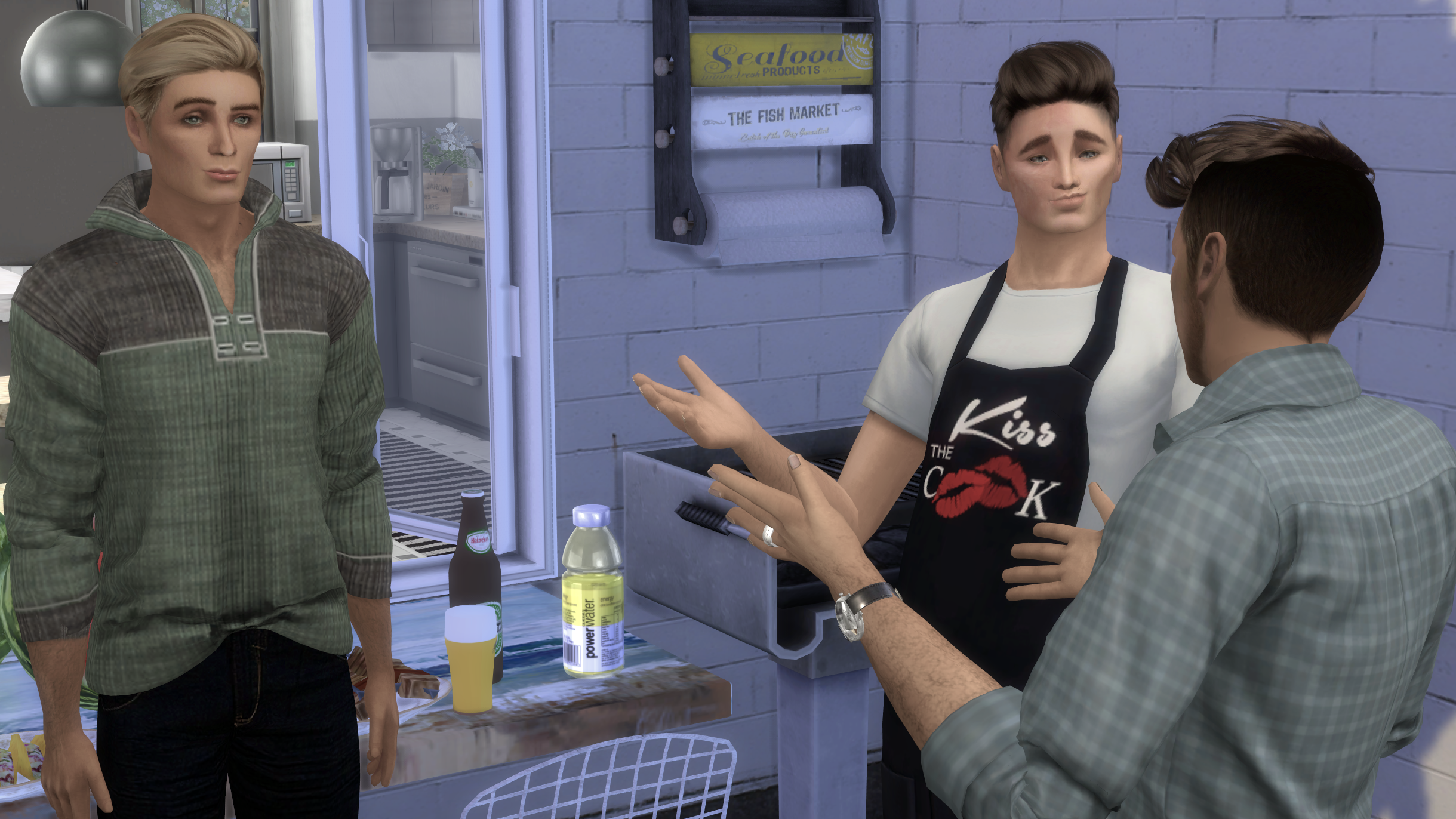 “Wouldn’t exactly be the second chance, now would it? No offense Sven, but you are not exactly an easy sale after all the crap you pulled. Just stick around, keep showing her you have your life together, finally thinking with the right head and remember that Dylan is still pretty fresh around here. They do not know each other’s quirks and weaknesses yet. He may still get sorted back out by Hannah without you doing anything. Your ace up the sleeve is Blakely. You will forever be part of Hannah’s life and you are a good father, which goes a long way with her.”

While the men were plotting, Hannah and Dylan stood a little away from the rest.

“How long are we supposed to stick around?” Dylan sighed discontent. 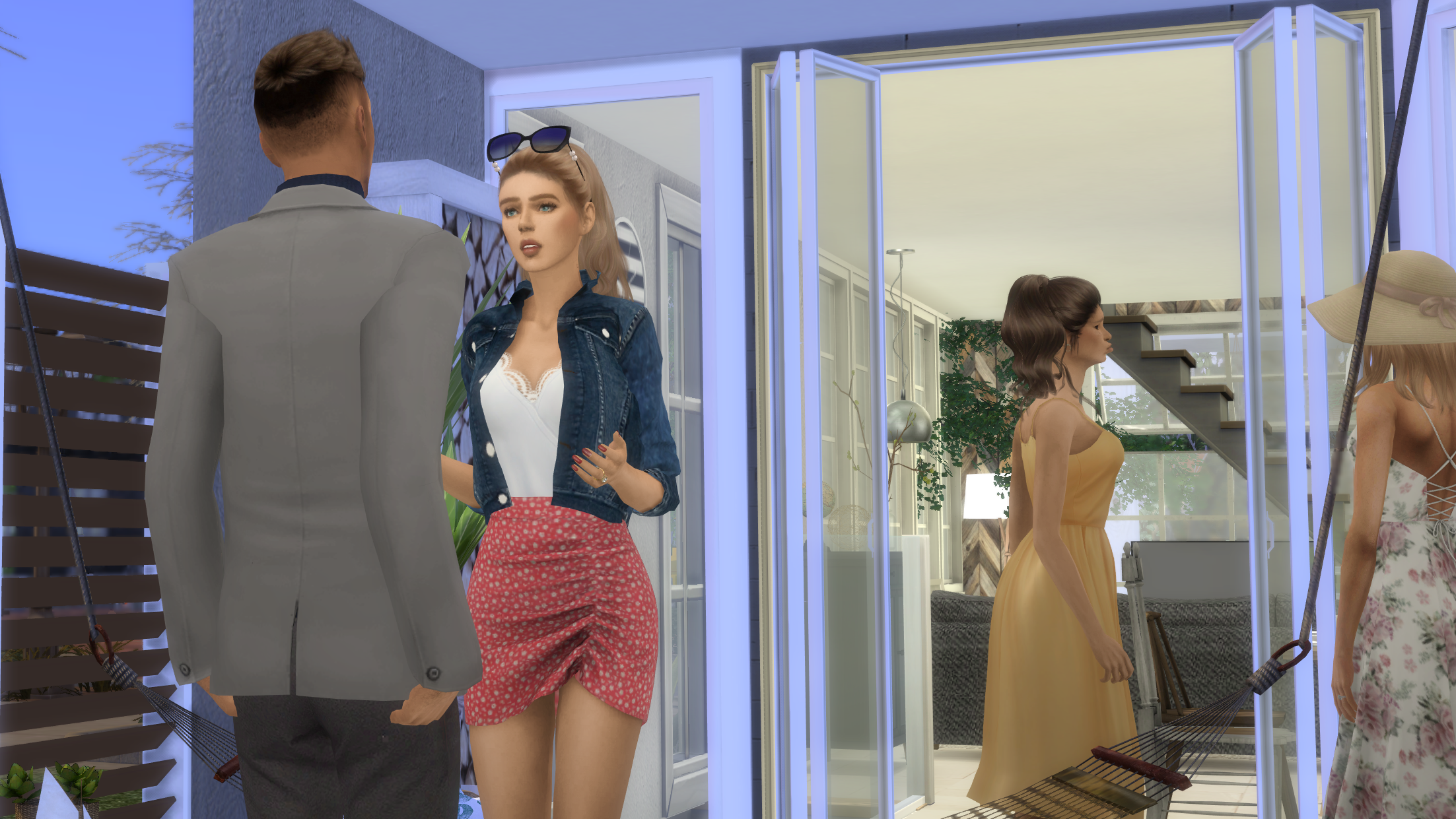 “What? We just got here. Blakely is having fun with the other little ones. Food’s not even ready.” Disbelief resounded from Hannah’s response.

“Can’t her father watch Blakely and we go out to eat?” Dylan suggested unnerved.

“It’s not his day and no. What is it with you today? I thought you liked my friends.”

“I do, but your ever-present ex, seriously? The way he stares over here is the stuff serial killers are made of. Weirdo.” 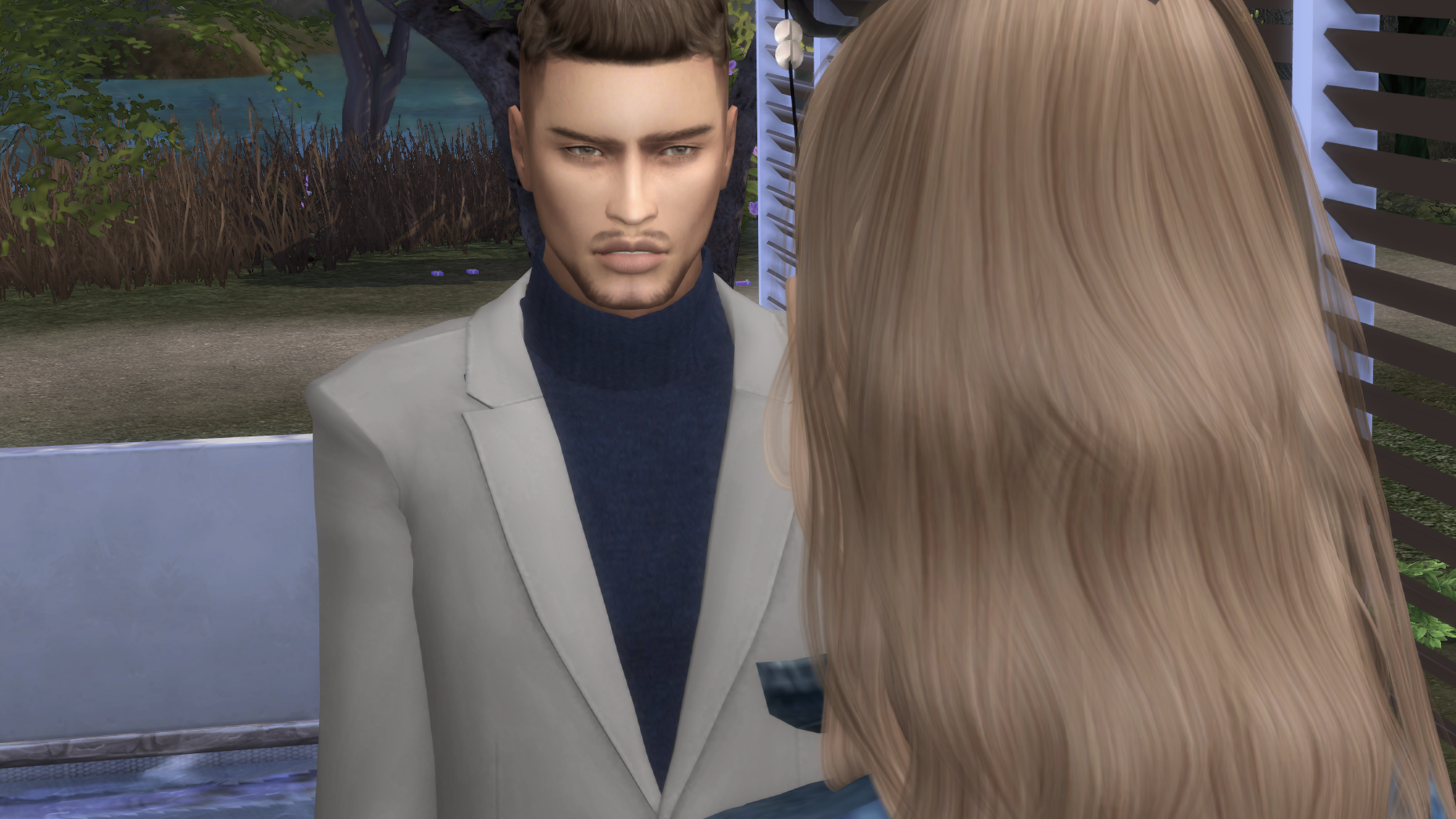 “Hey. He is not staring at anything, he is talking to Eric and Ewan. You’re seeing things. I’ll get us something to drink.”

“No! Why would I?” Hannah’s response was a lot less understanding now. 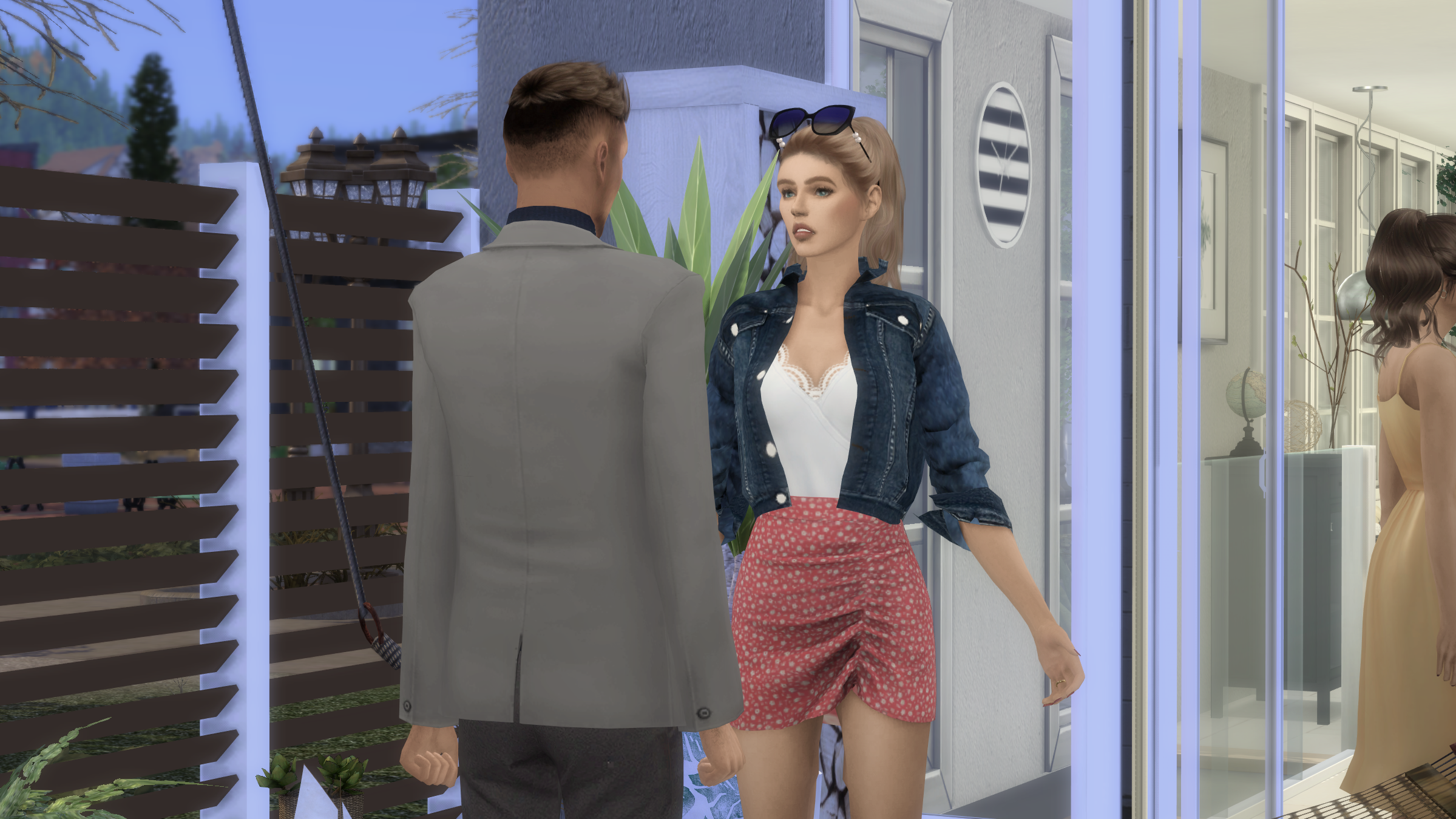 “Because it is more than uncomfortable for me to hang out with your ex-husband as much as you do. Clearly, your friends still prefer him over me. And does he really have to be there almost every time I come to see you? I get that he comes to your home because he used to live there and because of your kid, but why is he here now? Can’t he skip an event every now and then for crying out loud?” 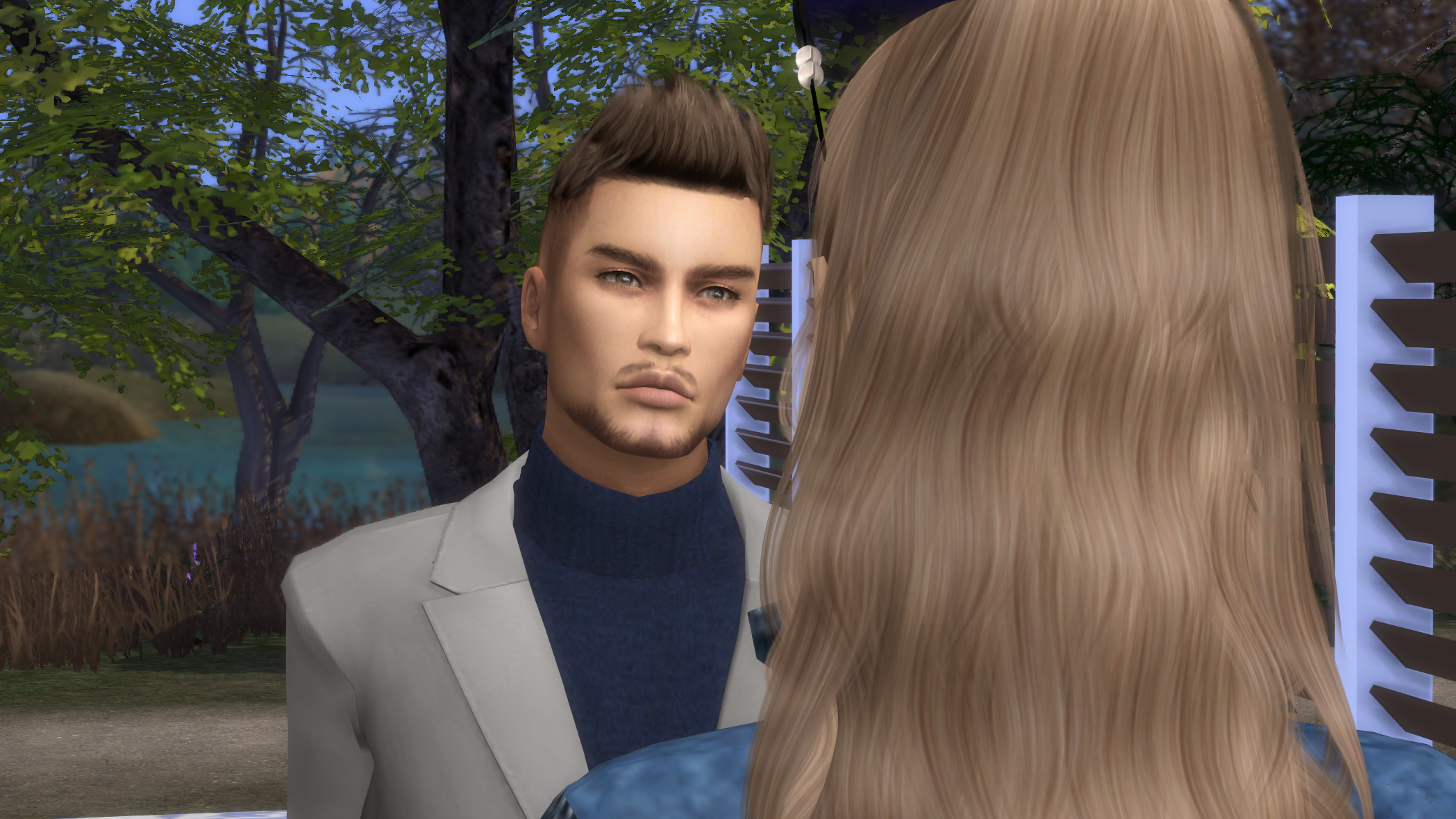 “He is friends with them too! He has known them for years. He and I divorced, not he and them. And friends are not part of a divorce settlement, Dylan.”

“Can we at least have the weekend to ourselves without him showing up?” Dylan groaned.

“Almost. I already invited him over for dinner on Saturday, for the new movie premiere. You were there when I invited him. But we have the rest, just us.”

“Then un-invite him. He has a TV, or he can watch it with your friends.” 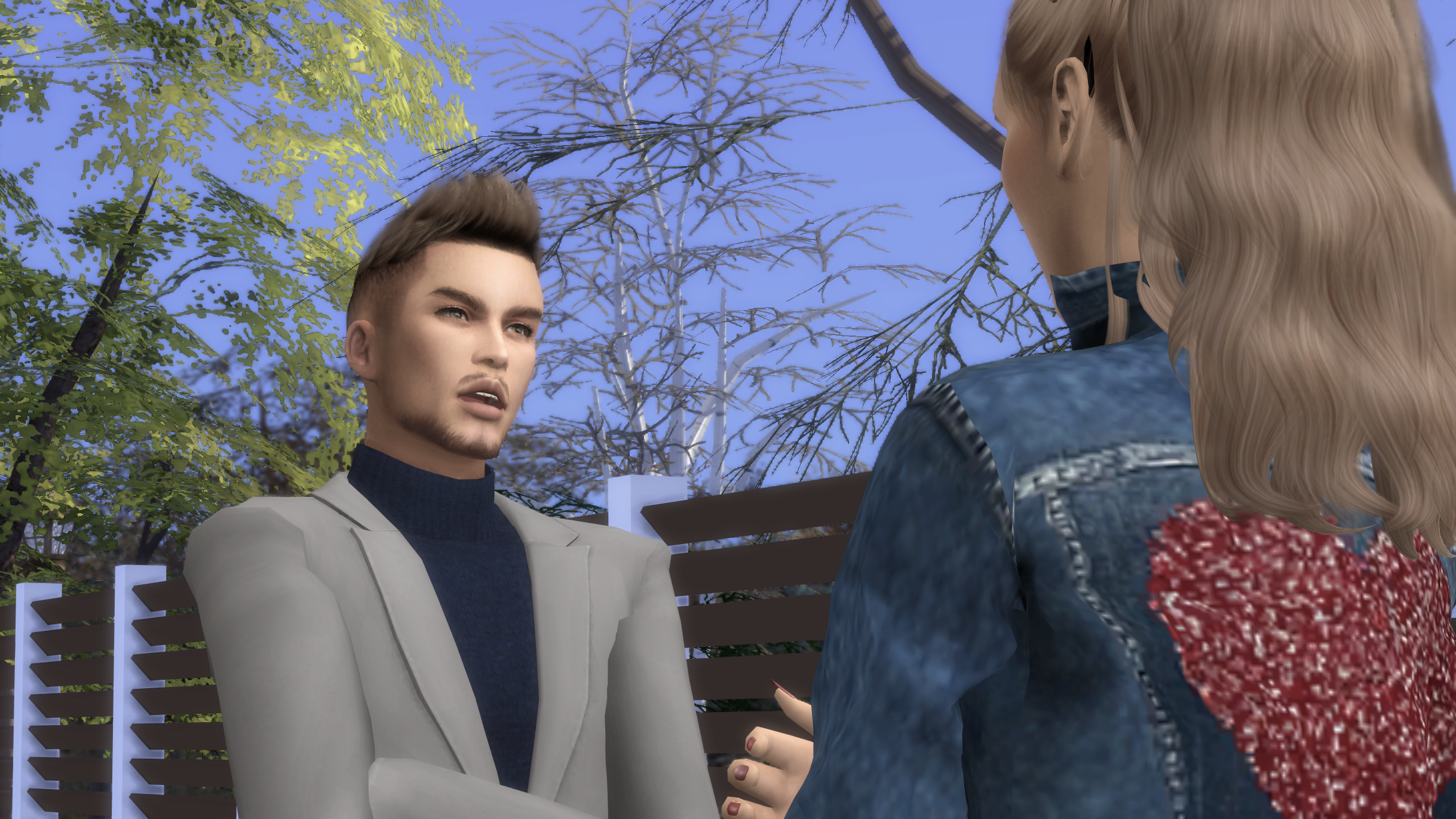 “Dylan – no! Sven is coming over and that’s that.”

“What about how I feel about this? I am going to come out and say it: I do not want him there this weekend. I want it just us. And your daughter, unless someone could take her for a few hours. I would really like to have some true alone time with you for once.”

“Well, you knew how I rolled with all this. Told you right away. So: personal problem!” Hannah hissed, fresh out of nice. 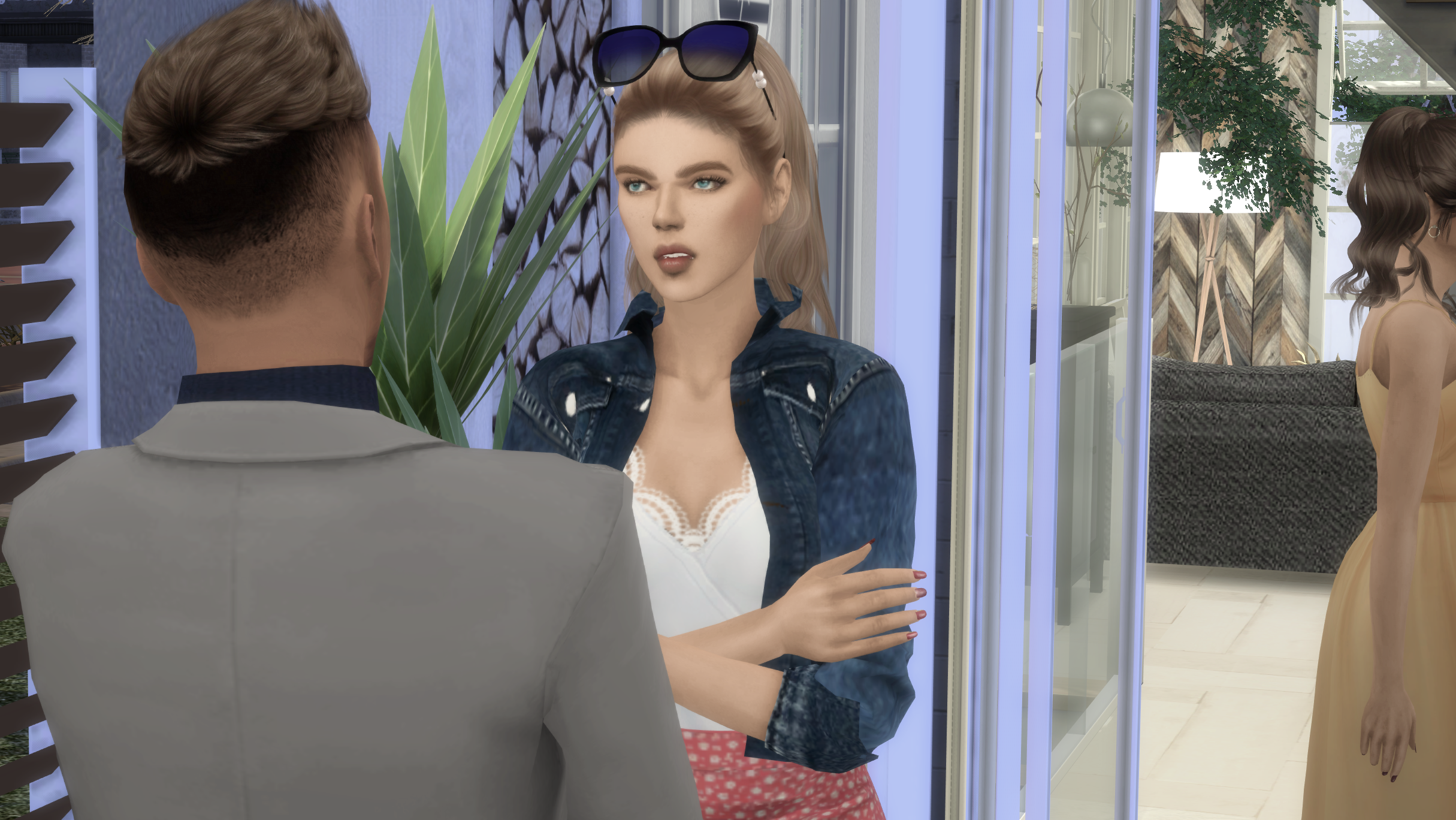 “Yeah, it’s a problem, all right! You got major problems, Hannah! I think I better go then! You have fun with your ex and friends.” Dylan stormed out.

The last part of the exchange had not gone unnoticed, nor the fact that Hannah’s eyes were welling up and bottom lip trembling, before she ran inside.

“But don’t do anything that requires clothing to be removed in Charlee and my bedroom, please!” Eric called after him.

Sven found her in the master bedroom. He knocked, but just entered without waiting for an invite. 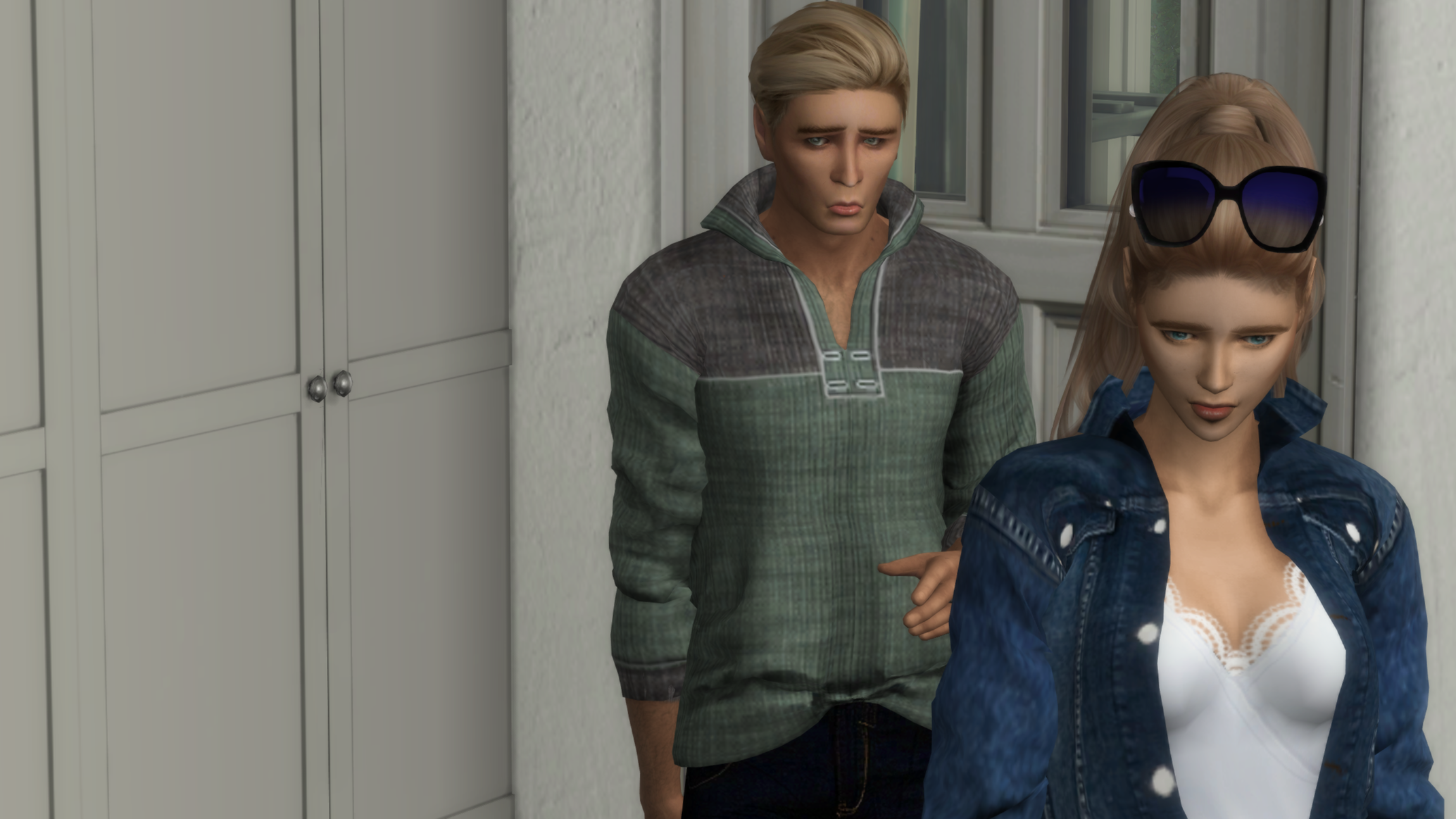 “Yes, please.” she turned to him, visibly caught between anger and tears.

He pulled her close. 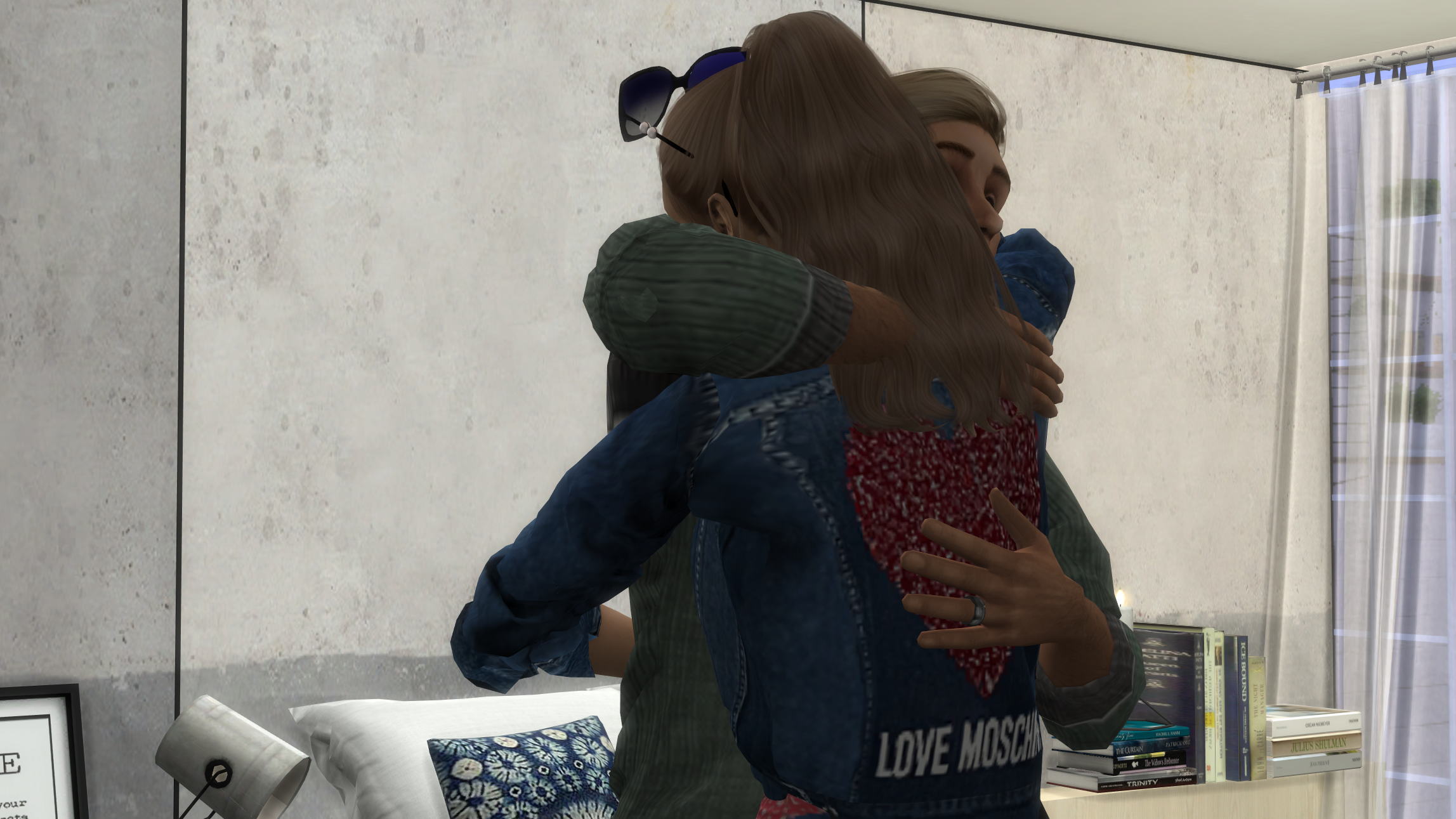 “You were right. Dammit. I cannot believe you were right. I am so mad right now, I want to cry because I am hurt, but am too angry to.” she whispered close to his ear.

“Dylan seriously threw a tantrum about us. You and me. Our friendship. Damn, I cannot believe it. What kinda micro-managing shit is that all of a sudden. He never had a problem before!” she told him as she freed herself from Sven’s embrace. 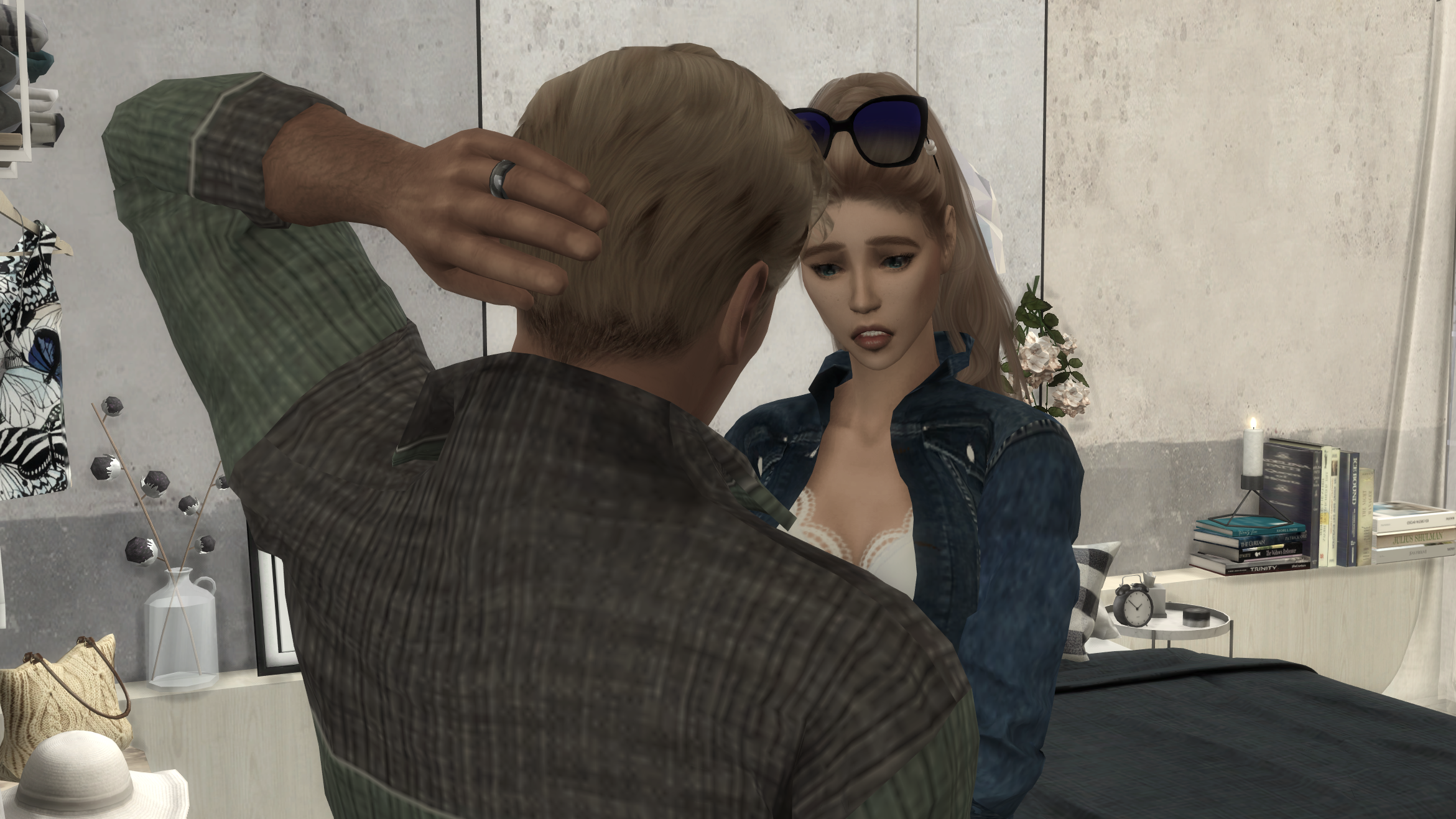 “Not surprised. You are beautiful, no man ever feels too secure about a beautiful woman especially when another man is involved.” Sven told her plainly.

“Are you seriously flirting with me NOW?”

“I wasn’t, but technically I could be, since you lost a certain bet …” he grinned. 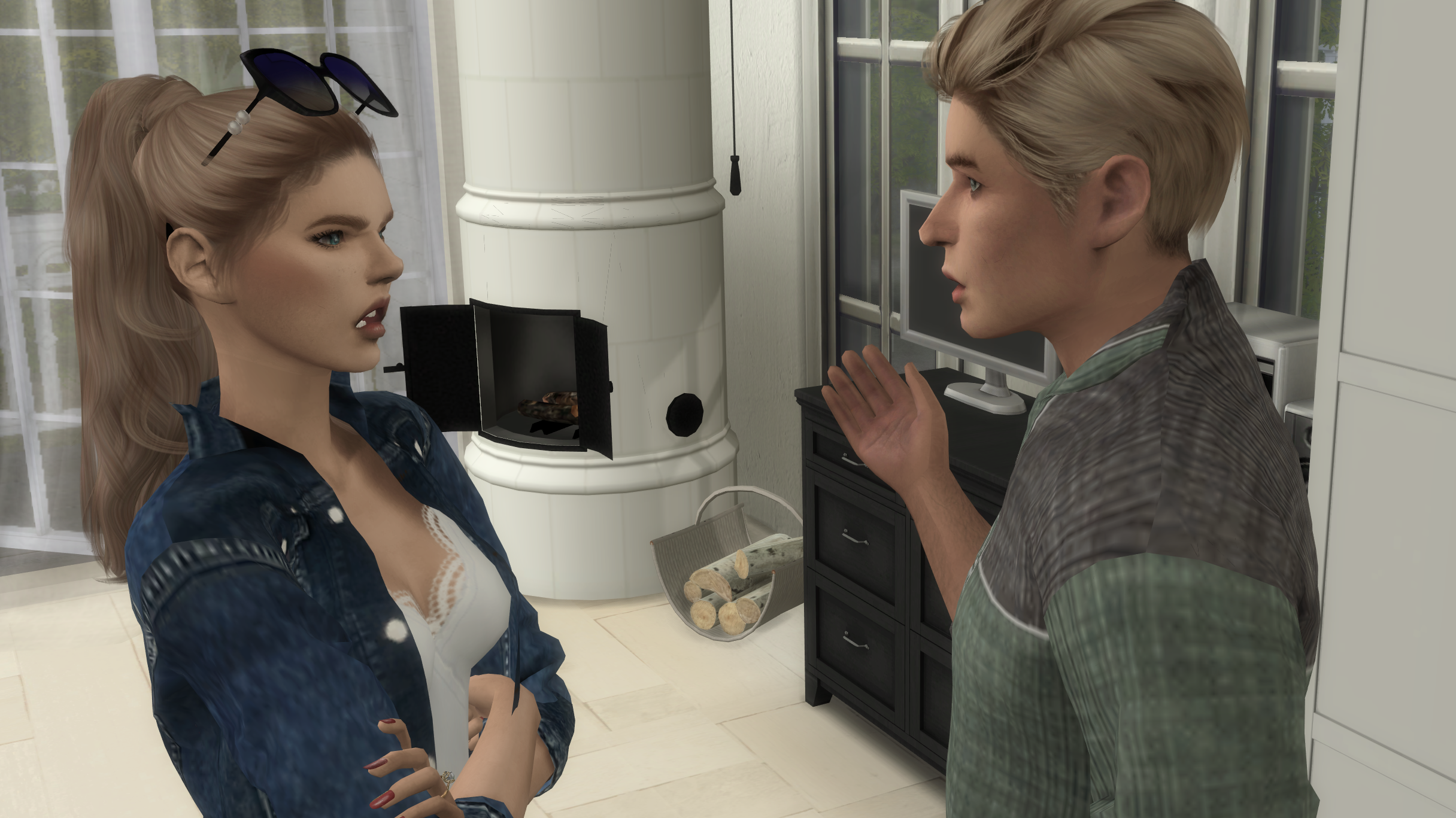 “Just teasing you. See, you don’t want to cry anymore because you are mad at me now. All better.”

“Want me to try harder? I excel at upsetting you. It’s one of my talents. Maybe the only one.” he winked at her, before taking a small bow, which made her chuckle.

“No, you crazy man. Let’s get some food. Eric has been slaving away at that grill. Screw Dylan. If he wants to pout after that male overlord shit didn’t work on me, he’s got another one coming. Daddy raised no fool, and definitely not one to be the personal wishing well to any man!” Hannah couldn’t help but laugh at Sven’s purposefully goofy behavior. 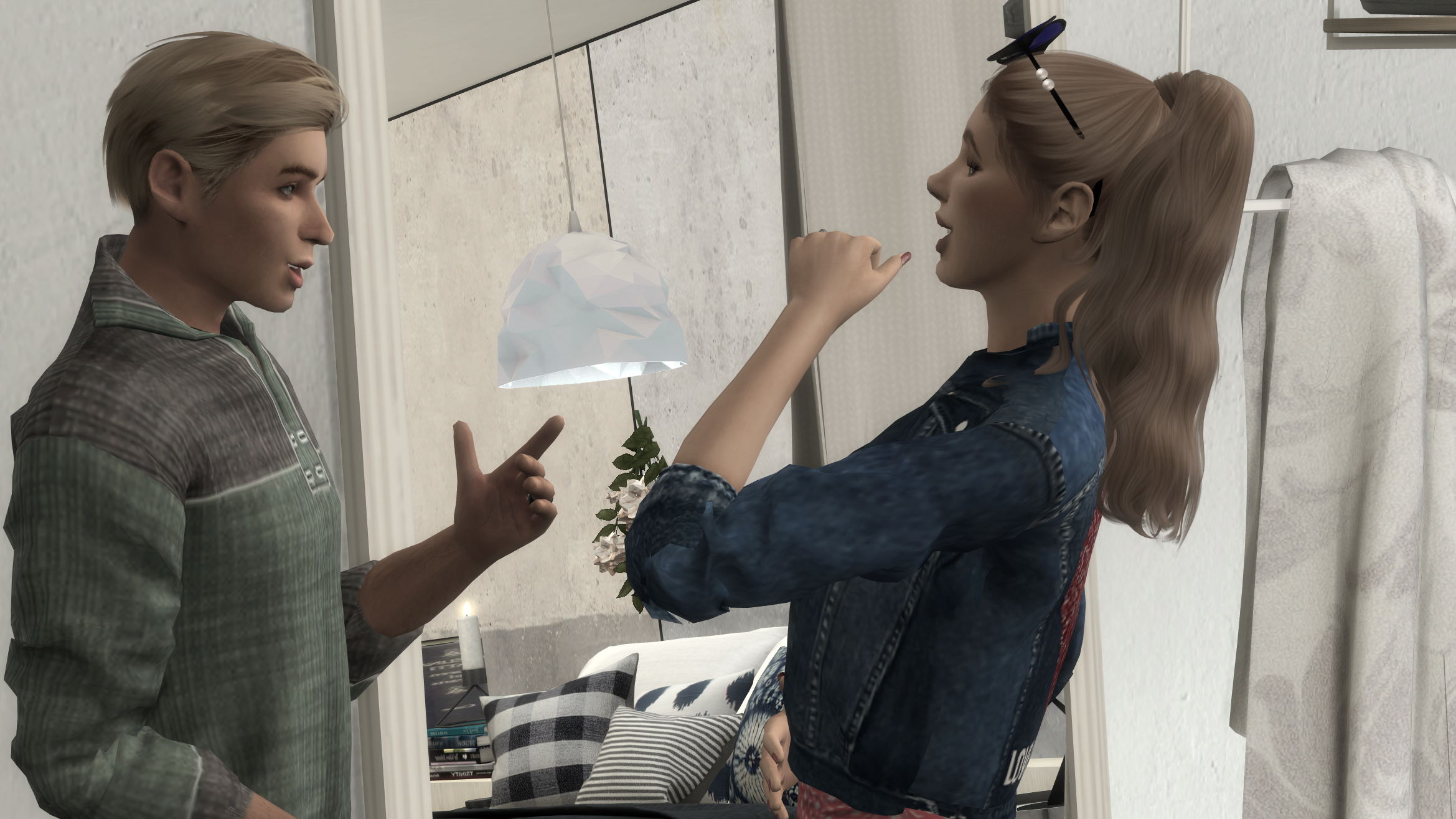 The rest of the evening was pleasant, even without Dylan.