Progress hurried in too fast often won’t last.
~Me

He could feel the relentless looks of the guy across from him, their desks facing each other, so Eric said without looking up from his task

“Someone just told me you and your old lady split up. Tough stuff man, sorry to hear.”

“Yah, thanks.” Eric wasn’t  keen on that subject.

“They said she kicked you out. Man, I don’t know how you do it, I wouldn’t risk my ass getting shot in the line of duty each day to pay the mortgage on a house I am not even living in. I’d put her out on the street until she acts normal again.”

“Seriously, man? First of all, Willow Creek is not exactly the trenches of World War II. If you haven’t noticed already, we deal mostly with property crime here. And my business is none of yours, but since we are partners now, I will tell you that this decision was mutual in order to be able to slowly work out some issues and get closer again. We’re not actually split up and nobody put anybody out.”

“Ah, I get it. One of you has been shopping around to get some variety in the bedroom, got caught, and now you are trying to see if patching it up is worth it for the rugrats, right?”

“Could not be more wrong. Just quit guessing, this is not a daytime talk show, and get back to the paperwork. Not doing all that by myself.”

“Hey Cameron, someone here asking for you. Won’t tell me his name, says he’s your cousin.”

“Tall, tan, obnoxious, with a toothpaste ad smile and an ego that barely fits through the door?”

Shortly after Ewan walked in, grinning.

“What brings you in?” Eric asked after they greeted each other. 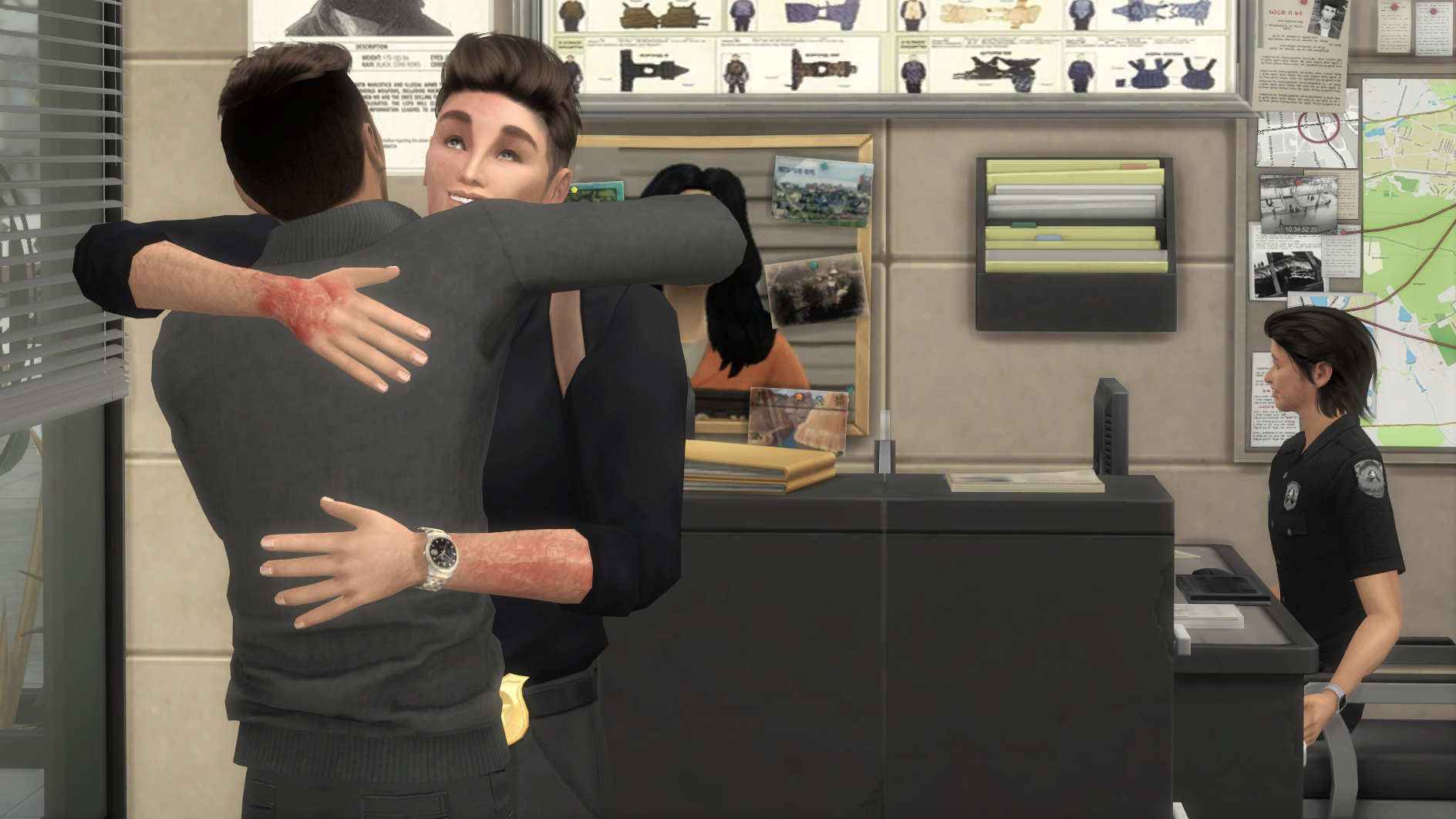 “Oh, no worries. Just a social call, not here to report any crimes, although I probably should. Some people seriously don’t know how to dress and seem to think moth-bitten rug is a good look for hair. Maybe I should create a fund to donate mirrors to the needy, and by needy I mean totally style-impaired.”

“Anyway, thought we could have lunch together. I was out and about and figured if I’d call ahead you’d just blow me off, would be harder if I was standing in front of you while you’re playing donut bingo with your buddies here.”

“Yeah, you caught us. Always asleep at the desk on mounds of paperwork unless we smell donuts. But lunch sounds good. Carl you wanna come? You both could get acquainted, seeing how you are brothers and all. Carl meet Ewan Cameron, Ewan, this is Carl Wynne, Max’ older brother.”

Carl grimaced and grunted something unintelligible not once looking up from his computer.

“What the heck is he doing here now?” Ewan whisper-yelled at Eric. 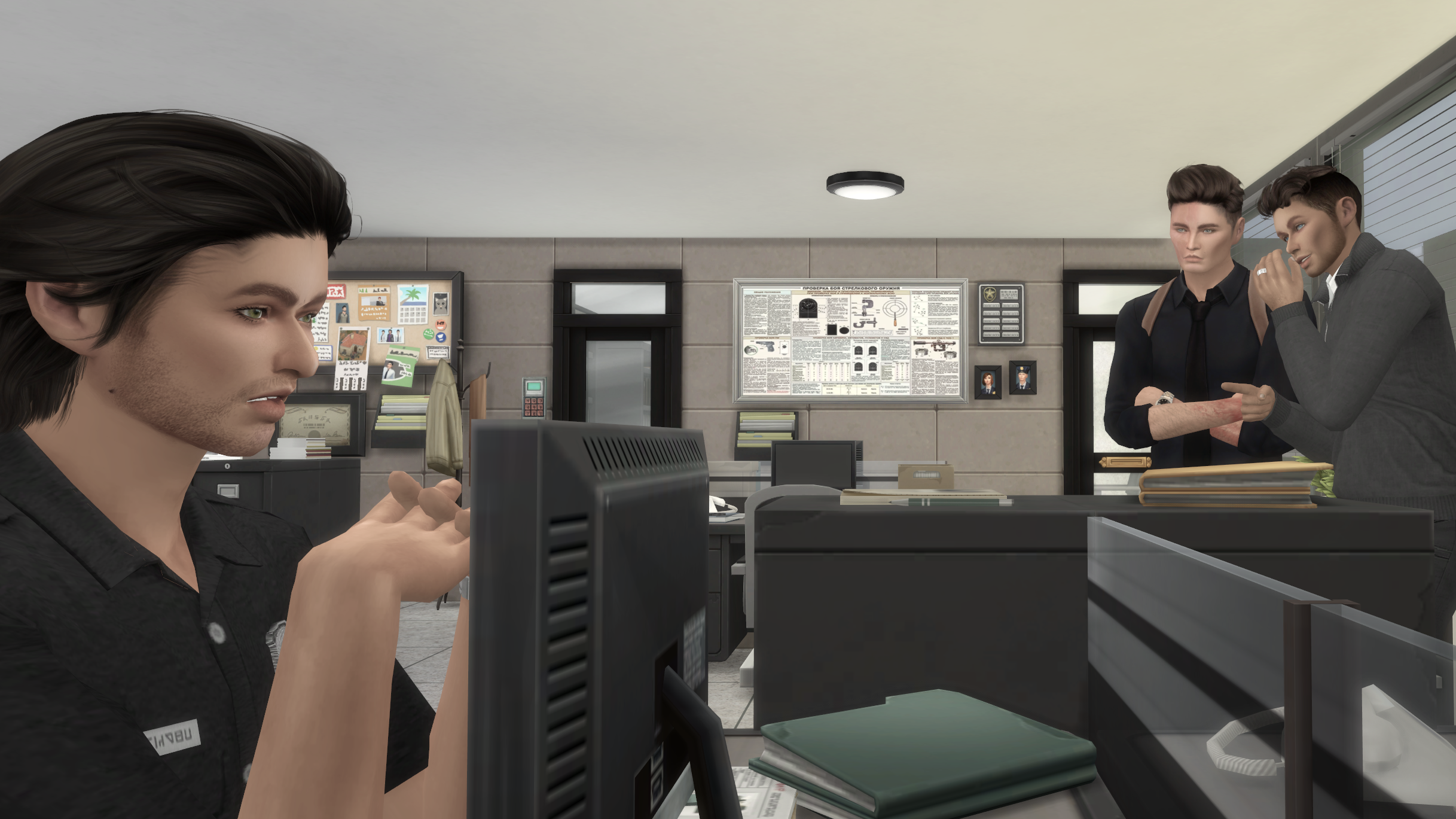 “Our latest addition to the force, lateral transfer from San Myshuno and incidentally also my new partner.” replied equally muffled.

“First of all, he and I are only HALF-brothers, please do take the time, and secondly, does he even consume real food or live off sucking other people’s souls, hopes and hearts dry, like mommy dearest used to?”

“Ewan, down boy! And why you asking me, he’s sitting right there and he can even talk. Go lay your boyish charm on him for a moment, I gotta run a file down to the lab so you two can make some lovely small talk until I come back, and then I’ll go to lunch with whomever is left standing and not incarcerated for brawling inside a police station, judging by how your meeting with the other brother went.”

“Well, he started it! I don’t randomly beat around on people, but I am not one to stand there and take it either!” 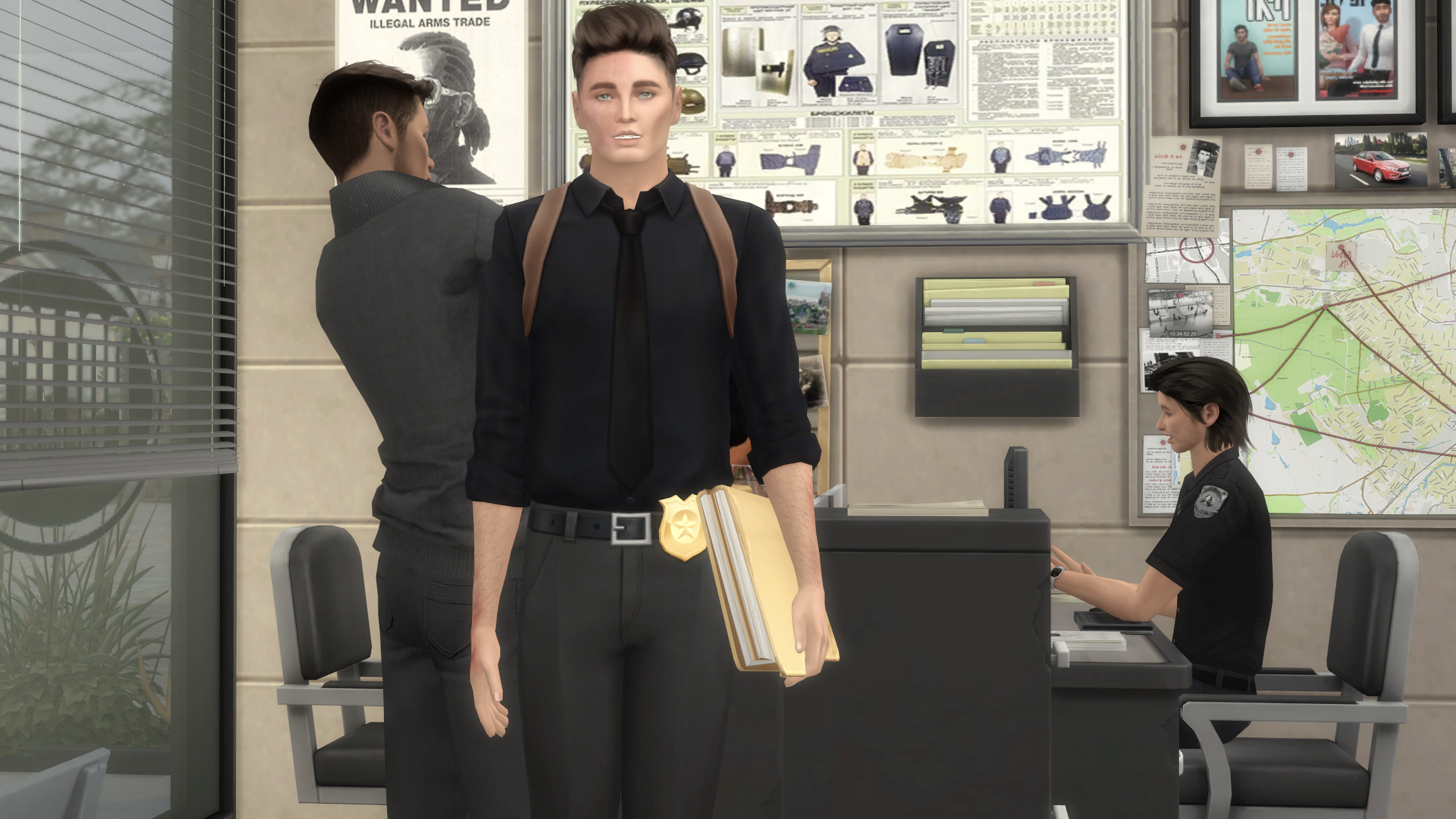 When Eric came back they were both still there, looking a little tense but otherwise intact and unscathed. Carl did join them and the lunch went all right, even though most conversation was via Eric. After they walked back to the station together, where Ewan had parked his car, he stopped Eric to talk one on one. Well, a very excited talk.

“Dude, what the fuck?! Why did you fling that moron on me without even a courtesy warning?” 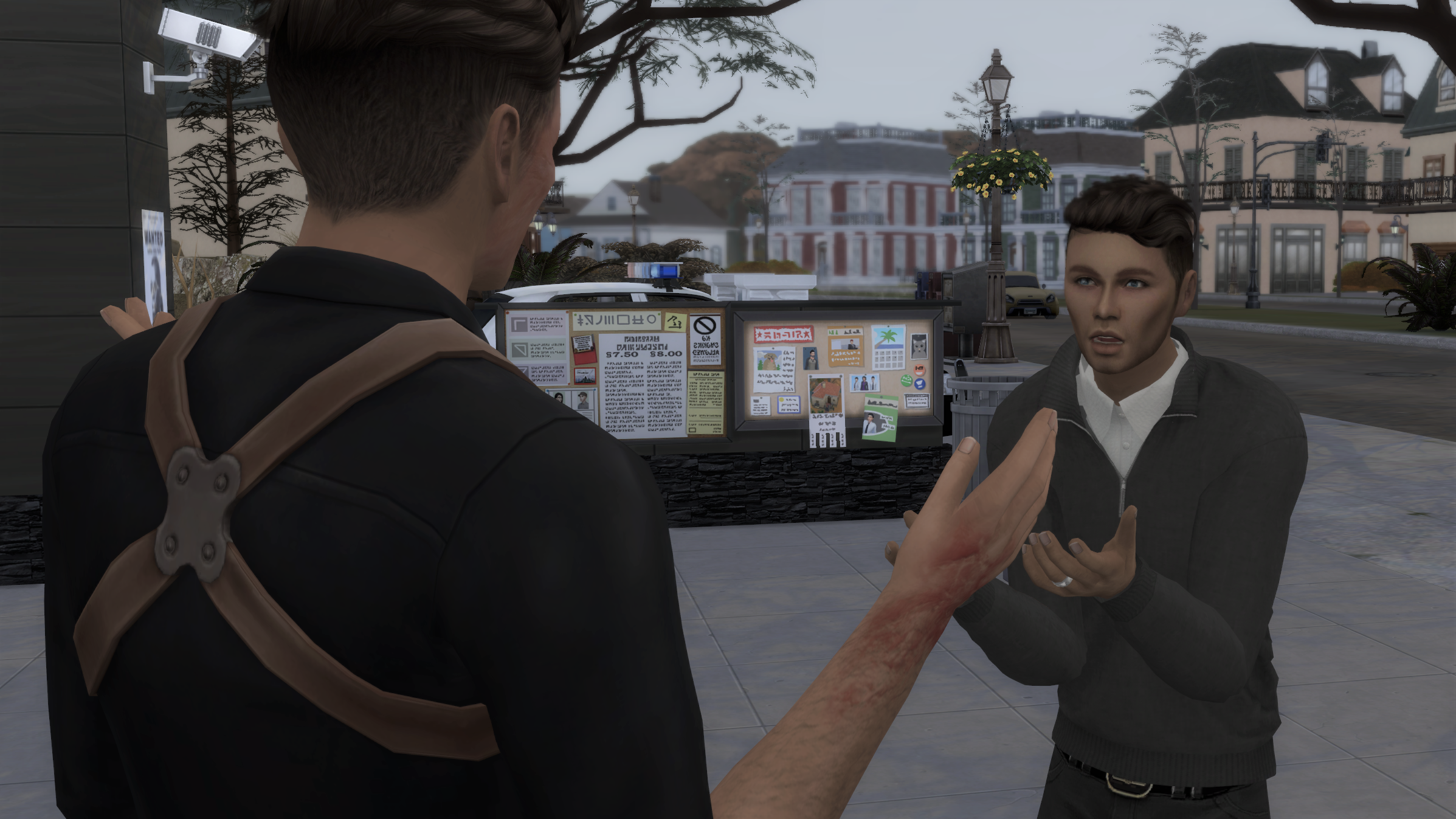 “I didn’t fling anything at anyone. He just started here yesterday, doesn’t know anybody yet, isn’t familiar with Willow Creek and he is my new partner. Was I supposed to let him starve at his desk while we go eat our bellies full? I consider that rude. Had to at least invite him, not my fault he actually accepted. And was I supposed to wait till you each connect the dots that you are both the late Sarah’s sons? I find that childish, so I got it out there on the table right away. You’re brothers. Whoop-dee-doo. What you both do with that info is up to you, you are both grown men. Observe in amazement that you survived the lunch with him. Means there are worse things in life, Ewan.” 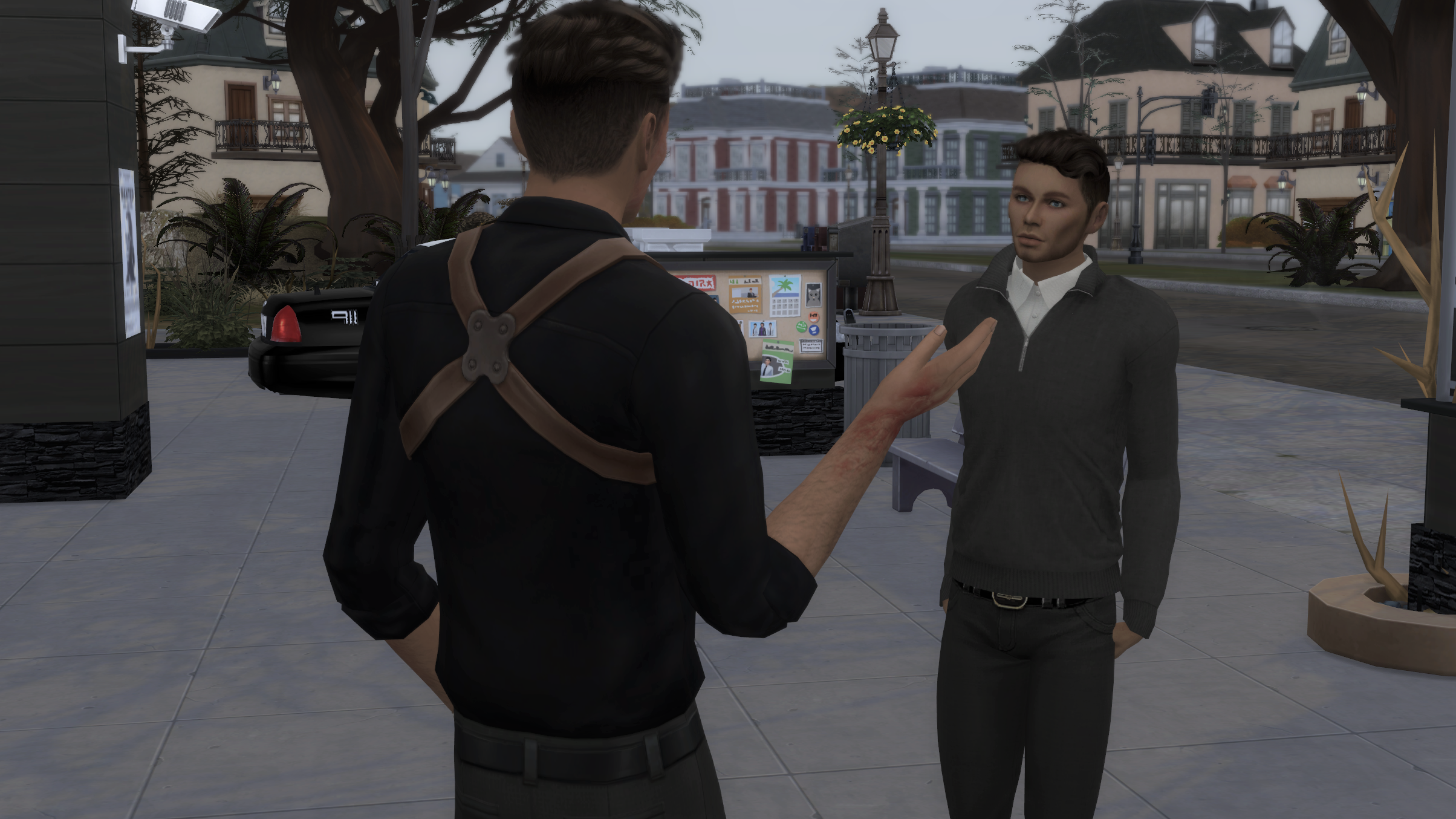 “Eric, again, that ding dong is only my HALF-brother! And not from the good half. I don’t want to claim him any more than I have to. And I cannot believe that is your new partner! Can’t you request another?”

“And what reason would I give them exactly? Sorry, my distant cousin isn’t digging this one, what else you got? Then have you swing by and approve my choices? Seriously Ewan, I know you have never been too close in touch with the reality us mere mortals have to adhere to, but even to you that should scream ‘STOOOOOOPID!’ in the brain. If it makes you feel any better, I am all for giving everyone a fair chance, but after what he has been spewing already this morning, I don’t foresee him and me becoming besties anytime soon.” 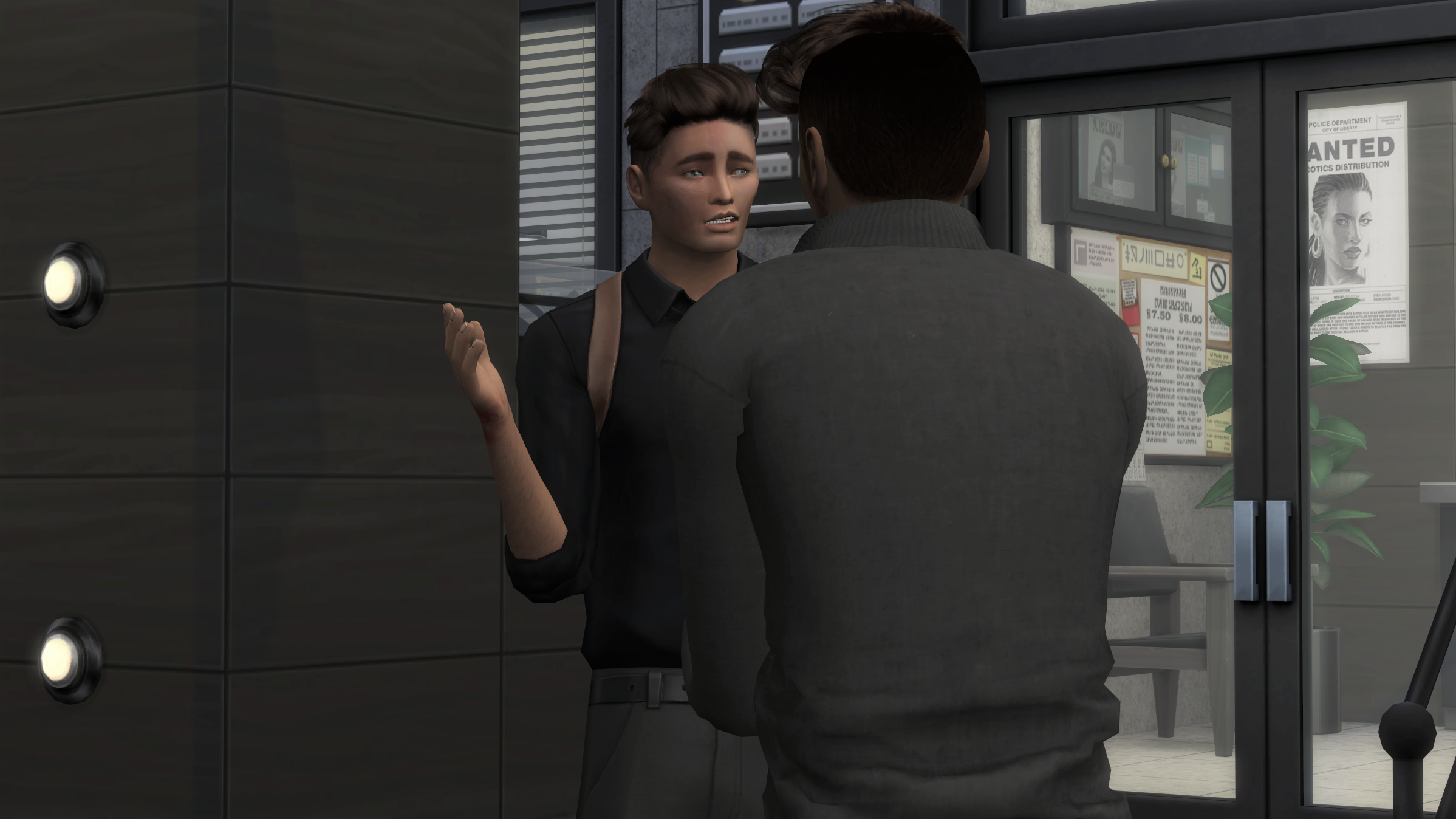 “You better not! And next time, give a brother a heads up before you drag shit like Carl Wynne into my life!”

“Yes, Ewan. The next brother of yours that my boss plants across the desk from me I will run by you covertly first so we can plan an official ceremony where he asks for your hand in brotherhood.”

“Cynic much? Need a pacifier? You really need to get laid again, man, you are crankier than a teething baby.”

After Eric got settled at his desk he realized Carl was staring at him again.

“Just trying to figure out how a decent guy like you can be related to that society mooch. I can kinda wrap my head around you being so overly patient with that wife of yours, but that guy?! Not seeing it. He rode your ass through lunch and you just sat there and took it ‘thank you, Sir, may I have another?’. If I were you I’d have cut that sucker loose long ago – after laying him out real good after he ran his damn mouth one more time. No wonder Max lost his cool with him.” 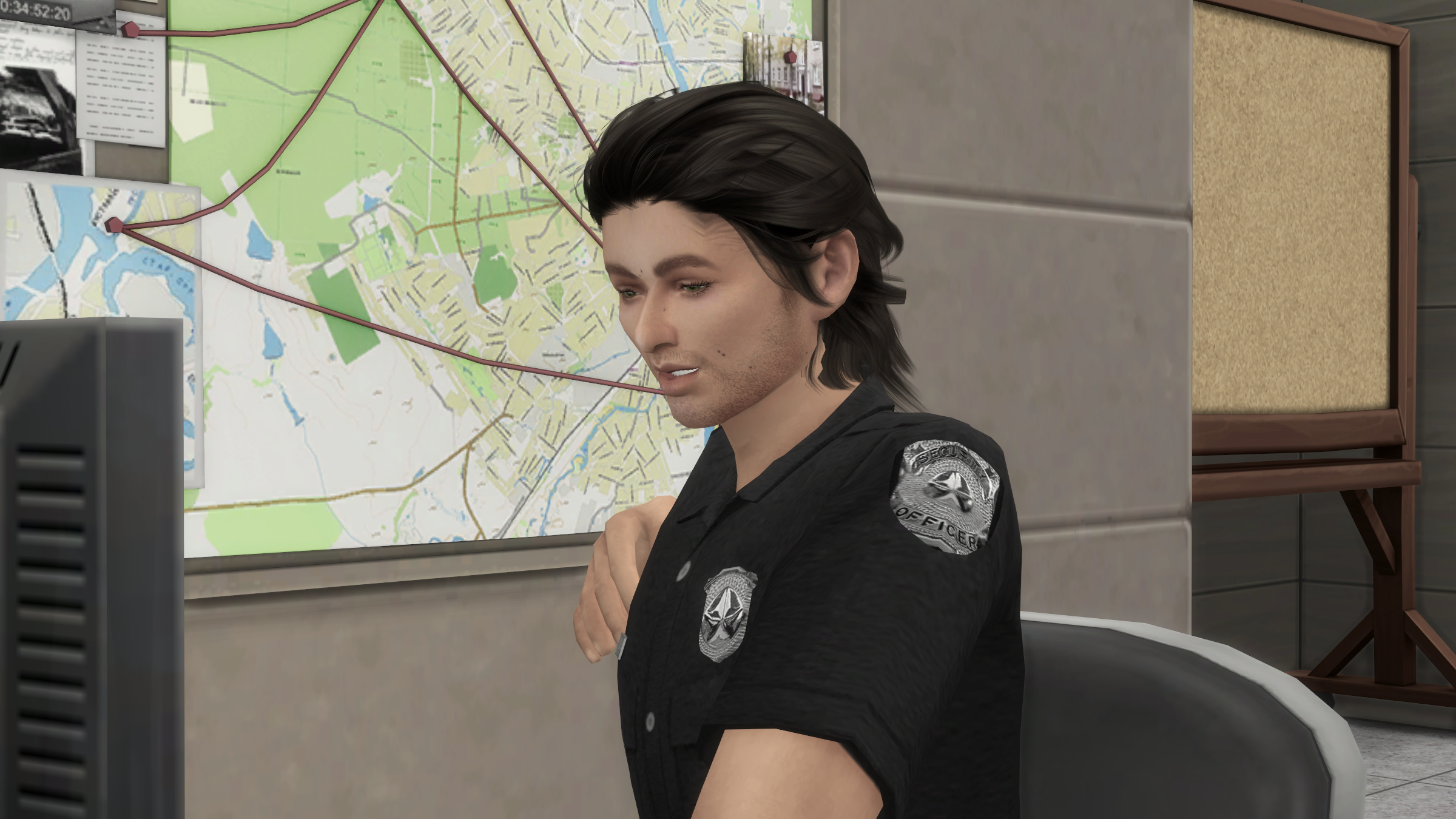 “All right, first of all, we’re both related to him, you actually a lot closer than me. Secondly, Ewan is also my best friend, we grew up together and have been through a lot together. Thirdly, he wasn’t riding my ass, he was just messing with me, something he does and has always done. That guy, as annoying as he may be sometimes, would do anything for me in a heartbeat and I know that. A true friend. You see, I heard things  through the precinct grapevine as well, rumor has it that you and Max have no other family and are struggling to make ends meet after all the medical bills from your mother rained down on you both. Sounds to me like you’d have room for another brother, especially one who could give you an interest free loan to keep you from ending up homeless.” 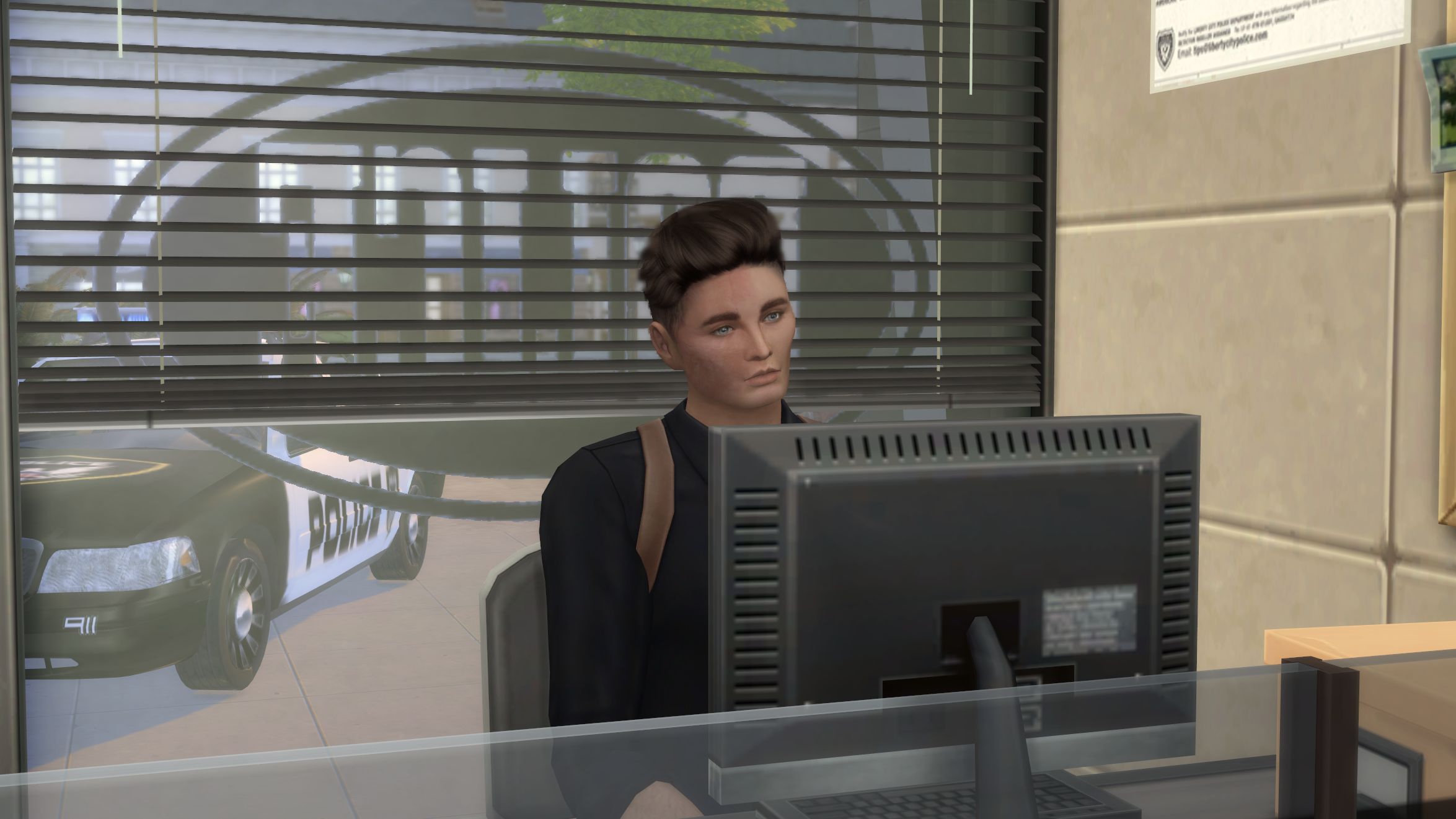 “I don’t want that arrogant fool’s money. He can shove it up high. Max and I will be fine. He is looking for work again and as soon as he finds something, things will look up again.” 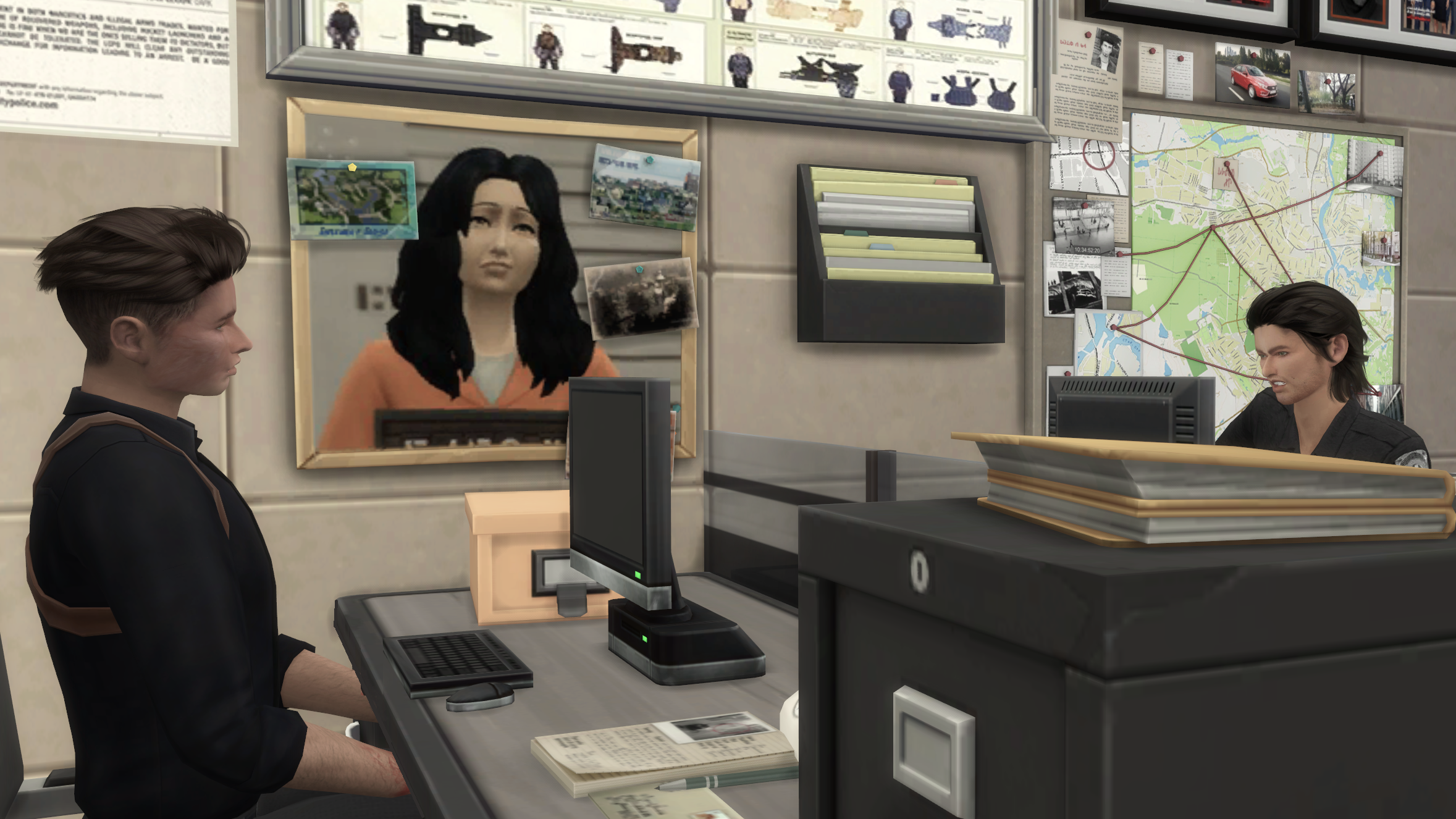 “Okay, suit yourself. But how does it feel when others stick their noses in your business right where it’s tender, huh Carl?” 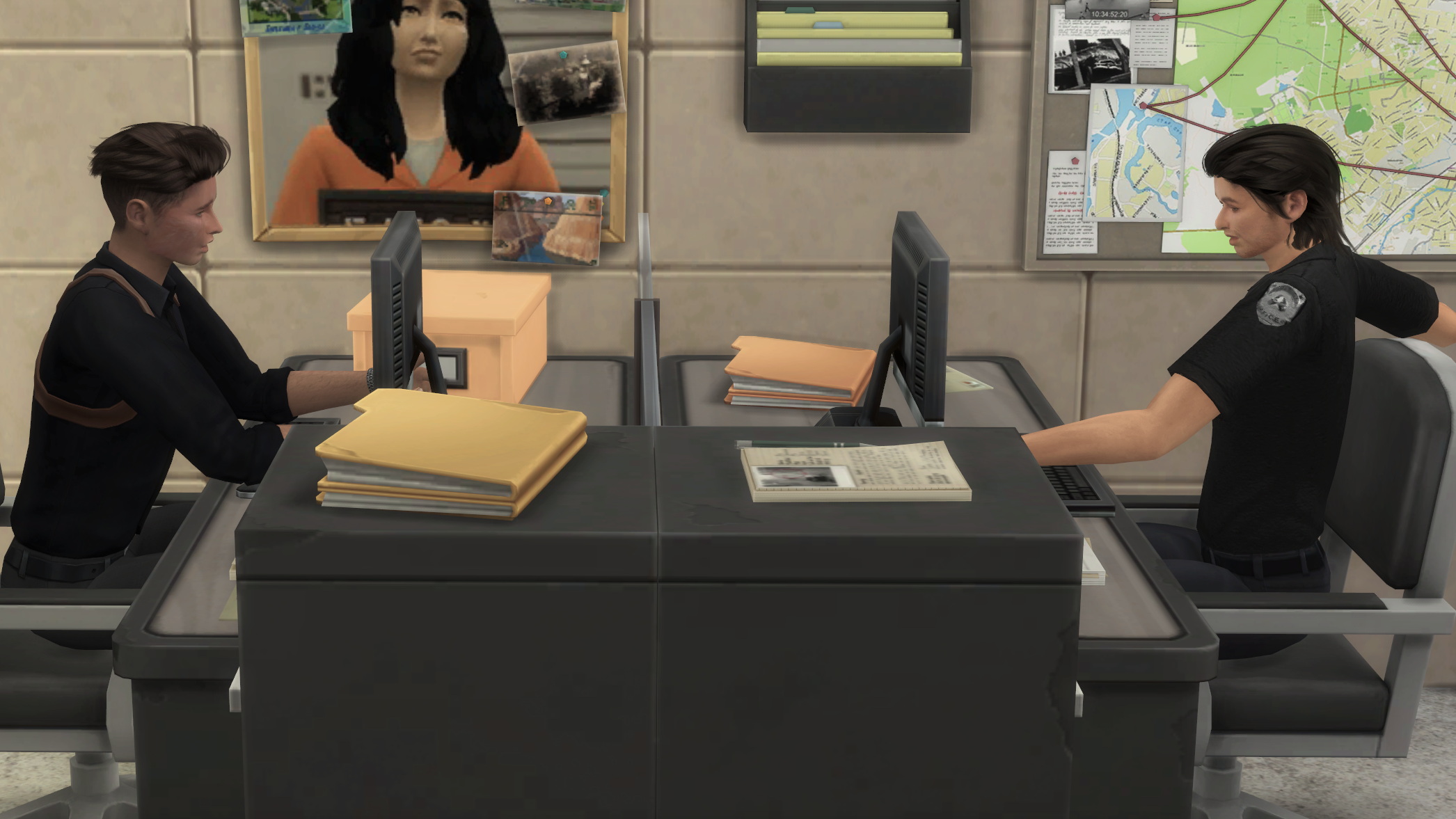 “Point taken, Cameron. My nose will stay far from your personal shit from now on.” 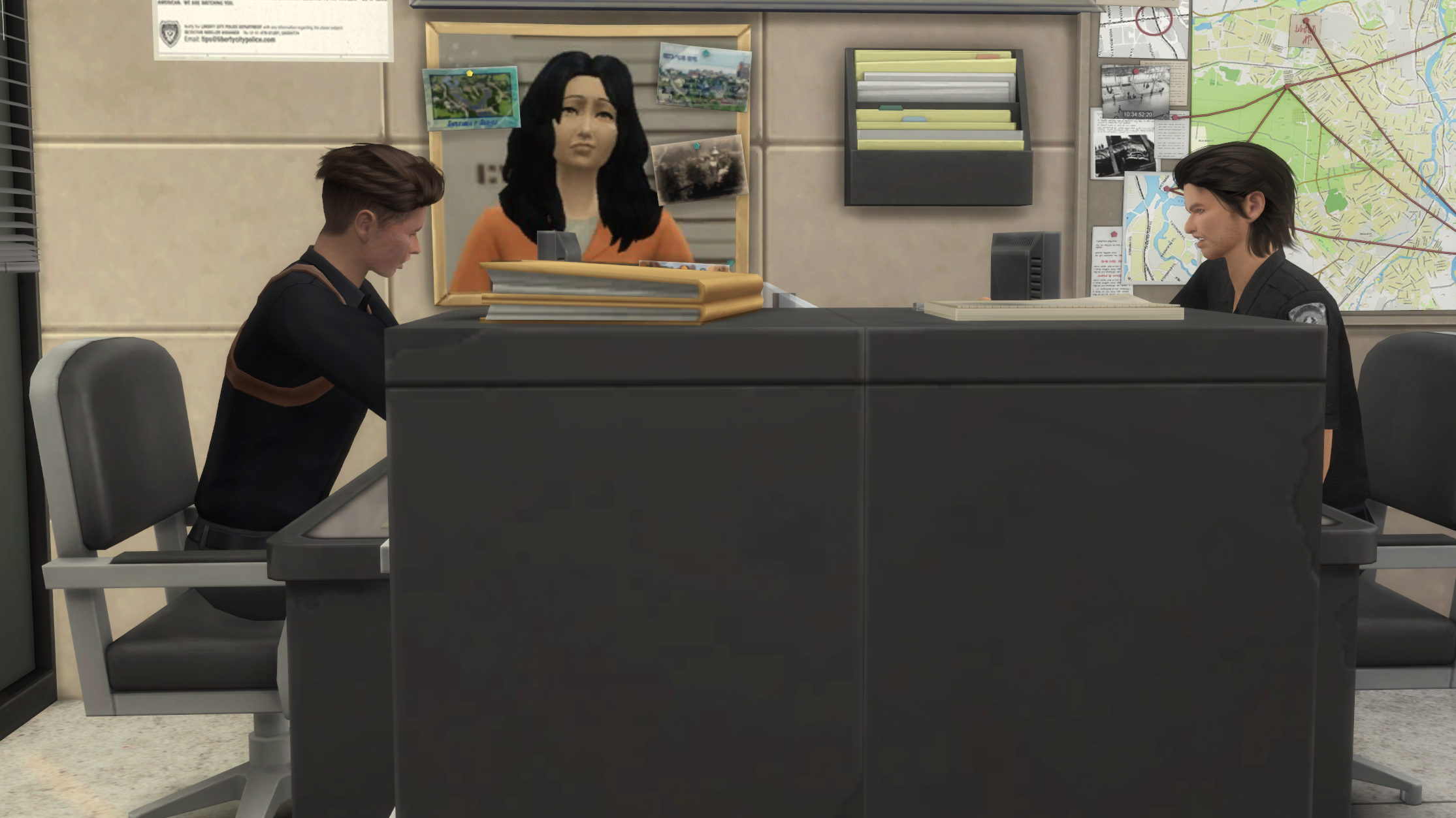 After work Eric drove over to Charlee’s home, who let him in after he knocked and patiently waited.

“Eric, I told you before, you do not have to knock. This is still your home too. Just use the key.”

“Right, sorry. Where is my little angel?” 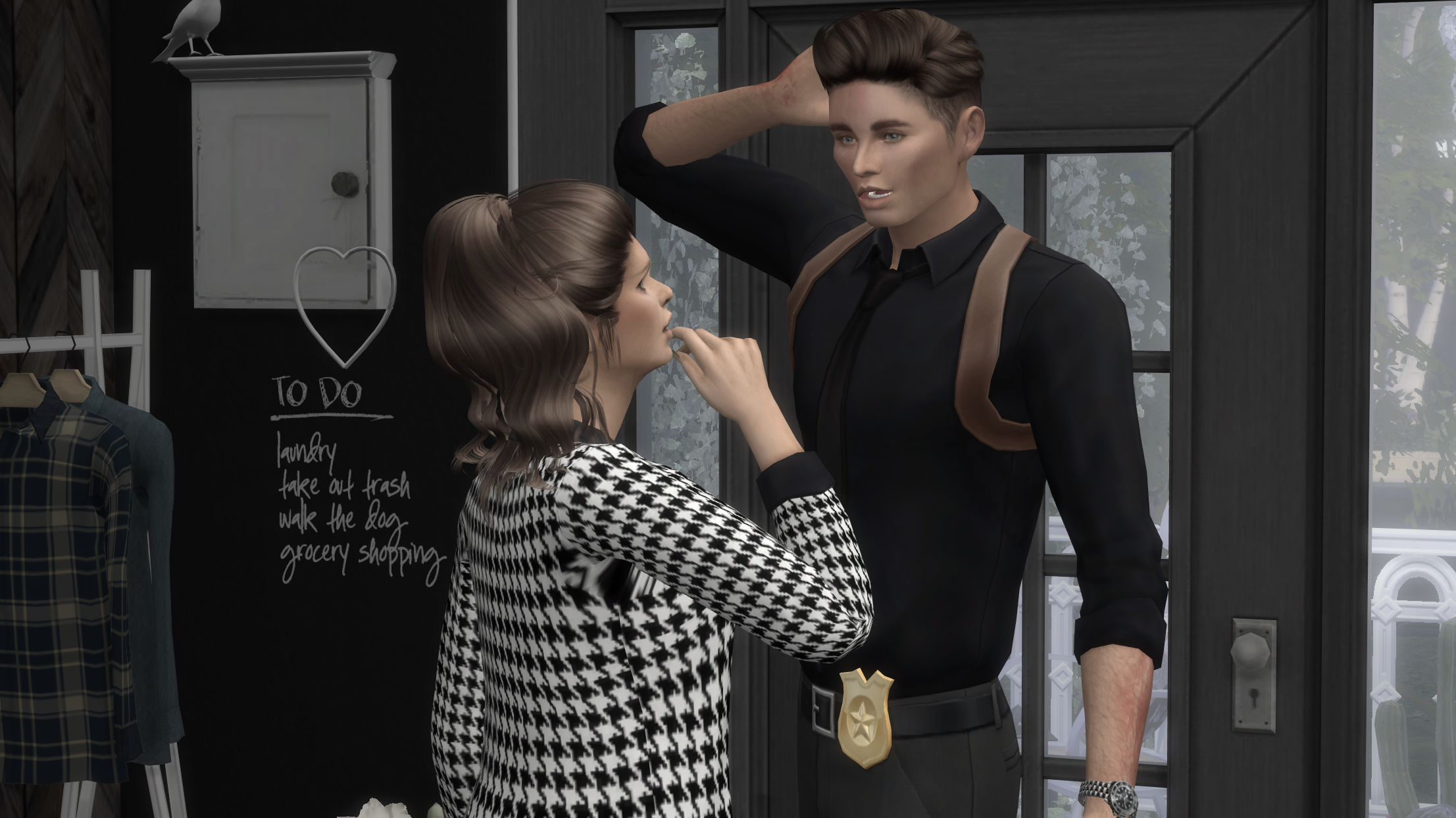 “Caitlin’s with her brother at the Beach House.”

“All right, guess I’ll see her later then. You ready for our run? I am, just need to change right quick.”

“I am thinking we may skip it today and be naughty instead of healthy today. I have wine open and dinner is ready. Join me?” 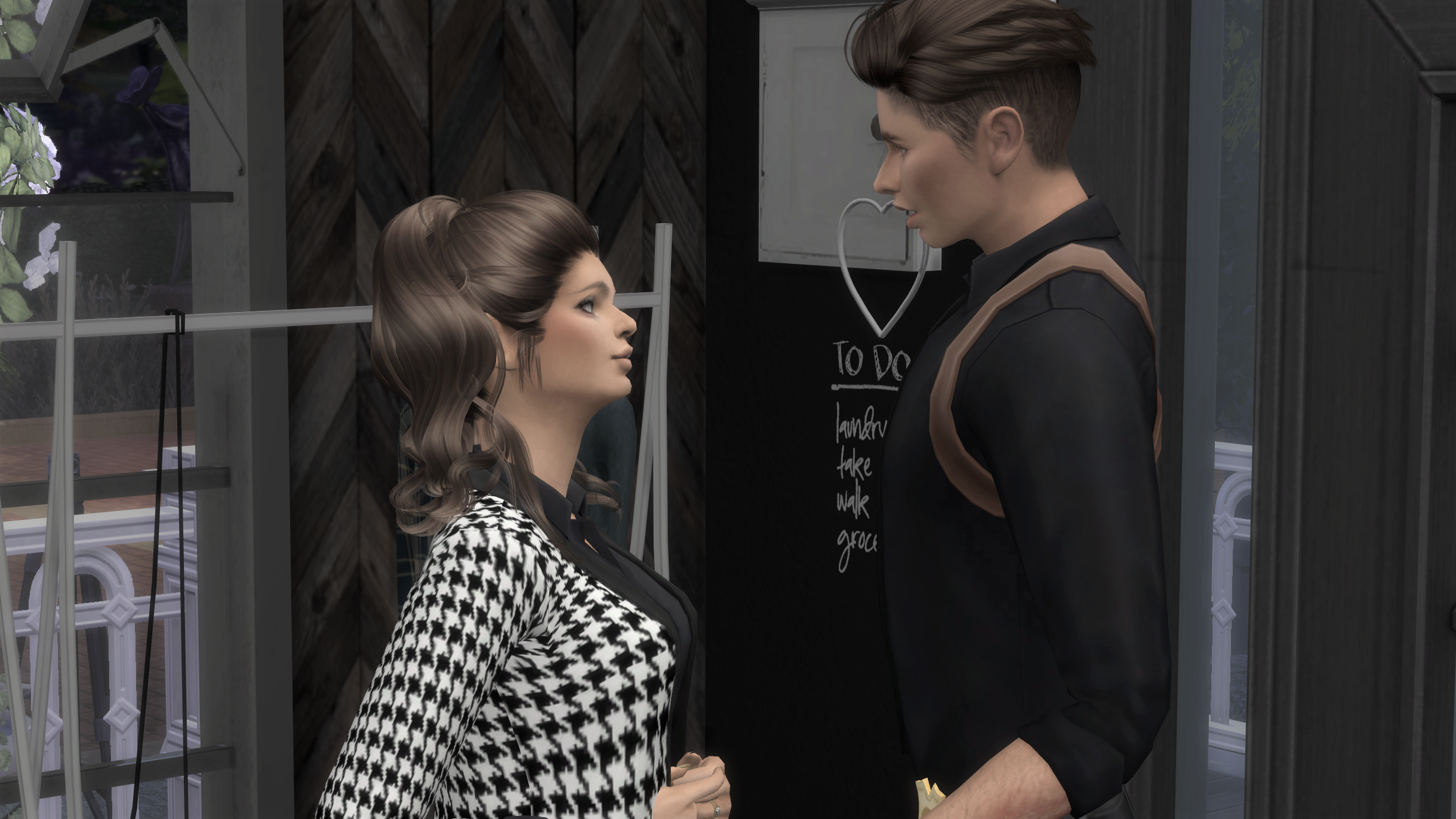 “Today marks a milestone in our relationship.”

“Not our anniversary, or any birthday … I got nothing, Charlee.”

“Today, many years and two beautiful children ago, a handsome stranger kissed me on the streets of Del Sol Valley …”

“Oh dear lord, I didn’t realize we keep track of that. Don’t I feel like a shitty husband now?”

“Don’t. If you have issues like mine, you tend you remember such things. But in light of our recent struggles, I thought we could celebrate. Especially since we already made our way back to kissing and hugging now.” 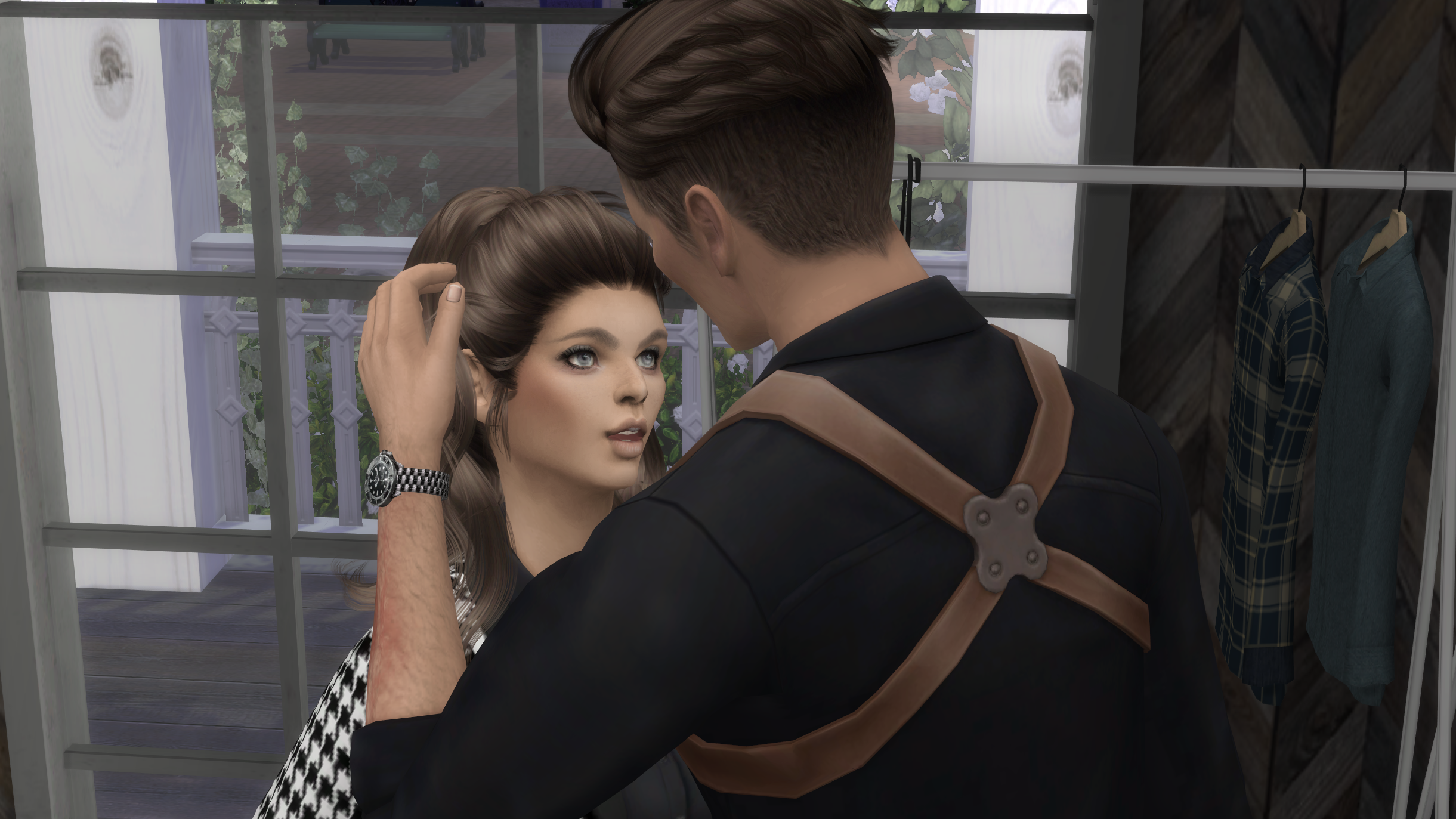 “Yeah, what did Dr. Holton have to say about that? Your appointment was today, right?”

“She said that it all looks good. Thinks it may be actual progress, since we got here slowly. Says to keep trying.”

“Well, I’ll definitely drink to that then. Let’s get the wine.”

Eric kissed her, gently, careful not to hold on too tightly so she wouldn’t feel trapped. 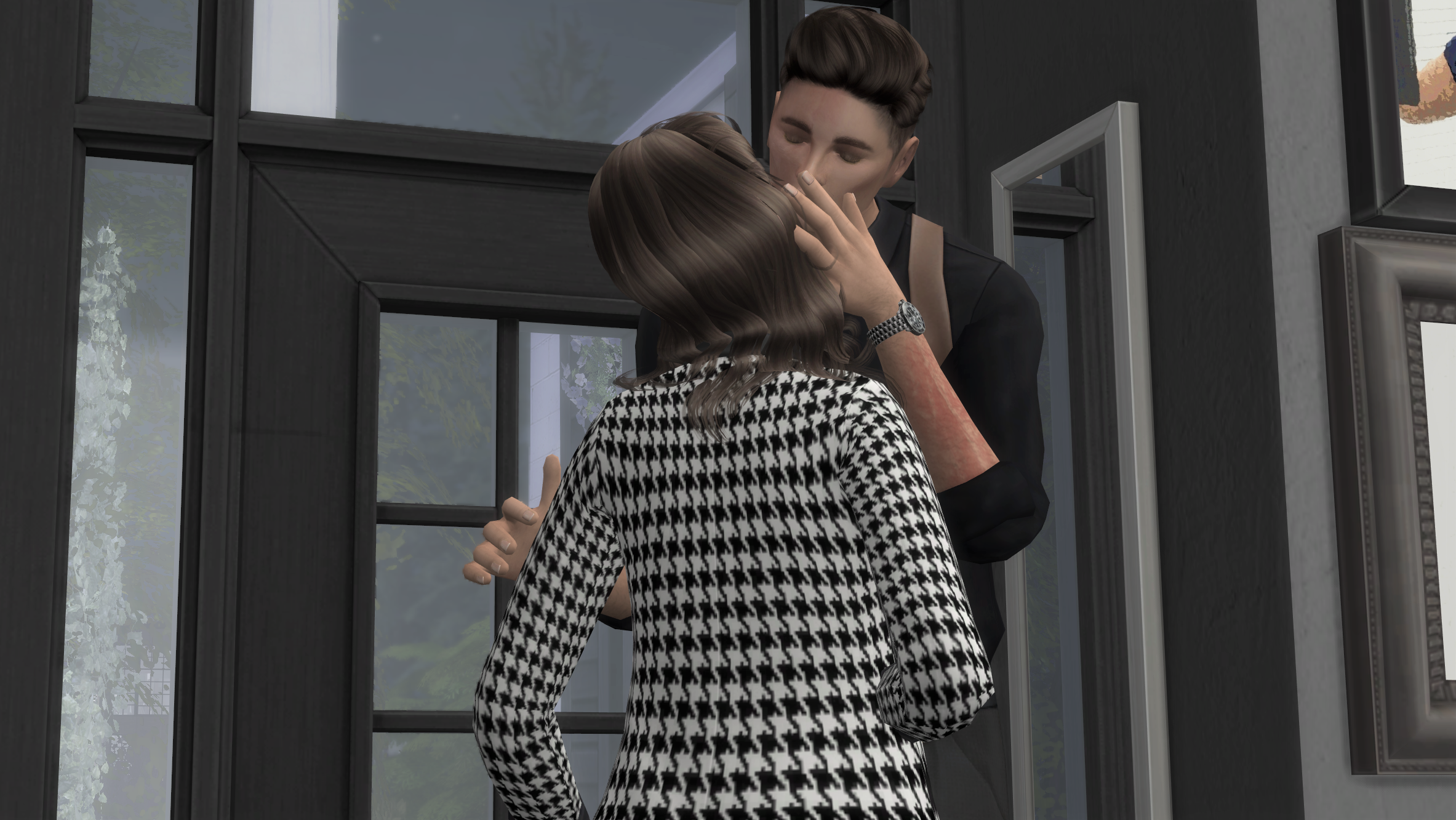 “Kiss me again. More. Like you really mean it.”

He did and before they knew it, the kisses changed from gentle and romantic to prelude to a deeper intimacy, it leveled up fast.

Their breathing increased, as it went further. An avalanche had been tread loose.

She began to unbutton his shirt, her hands shaking with barely bridled desire, he helped her, she pulled the shirt off his now bare shoulders, caressing and kissing his skin, before she quickly relieved herself of her jacket and top, tossing it carelessly to the floor near wherever Eric’s shirt had landed.

Both of them too wrapped up in the moment to stop and remember the warning words of Dr. Holton about taking baby steps. Neither cared anymore. 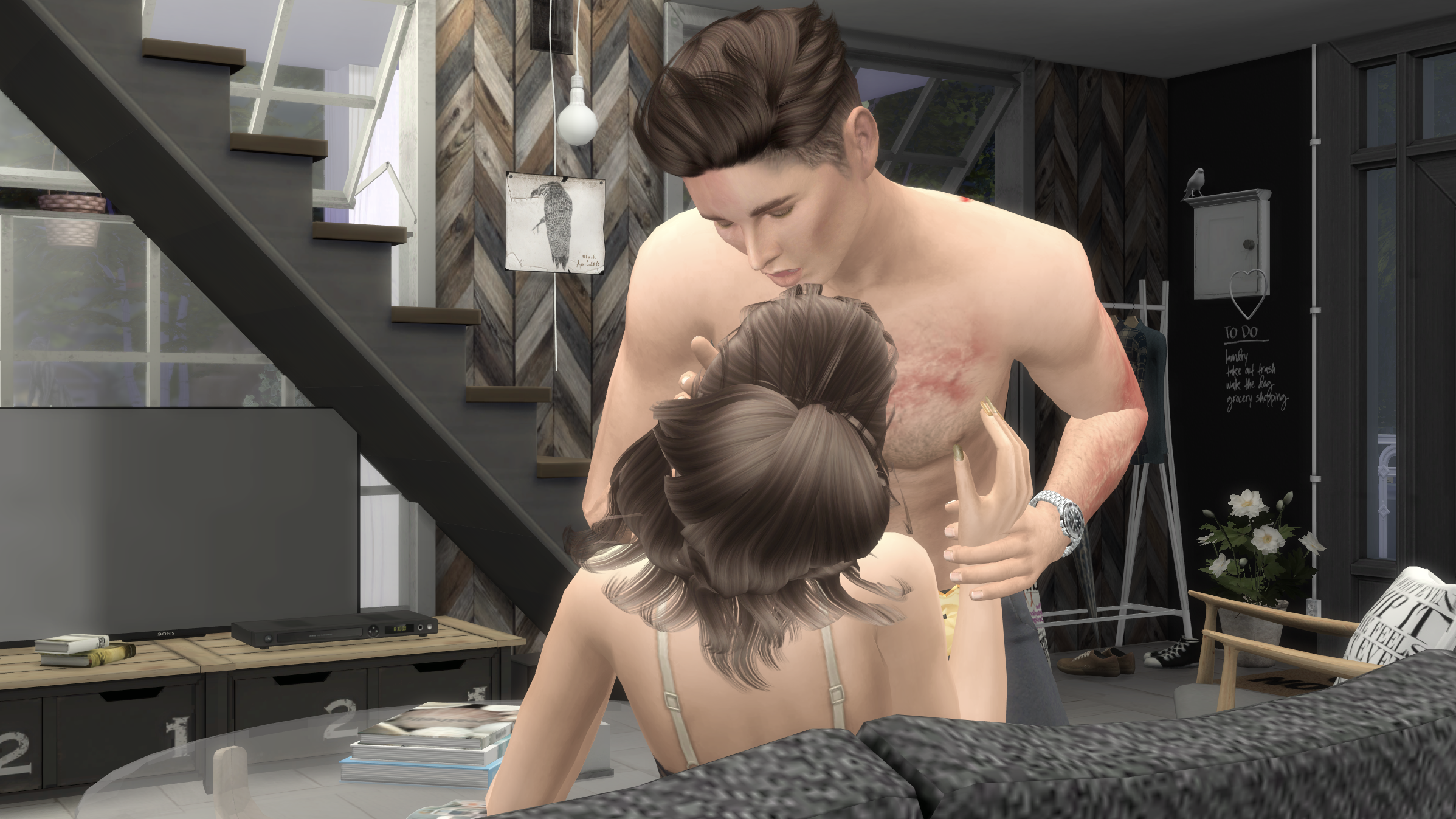 They made it over to the couch, kissing, touching, things got more and more intense, Charlee, pulled Eric down atop her, making out, until suddenly without warning Charlotte screamed and began to fight Eric off.
Taken by surprise he tried to calm her by holding on to her, until she found a large book and slammed it against his head, hard, sending him tumbling to the ground.

Dazed he stayed where he had landed, tasted blood in his mouth, and felt blood running from his nose, as he sat there, shocked and confused, Charlee frozen in place staring on. 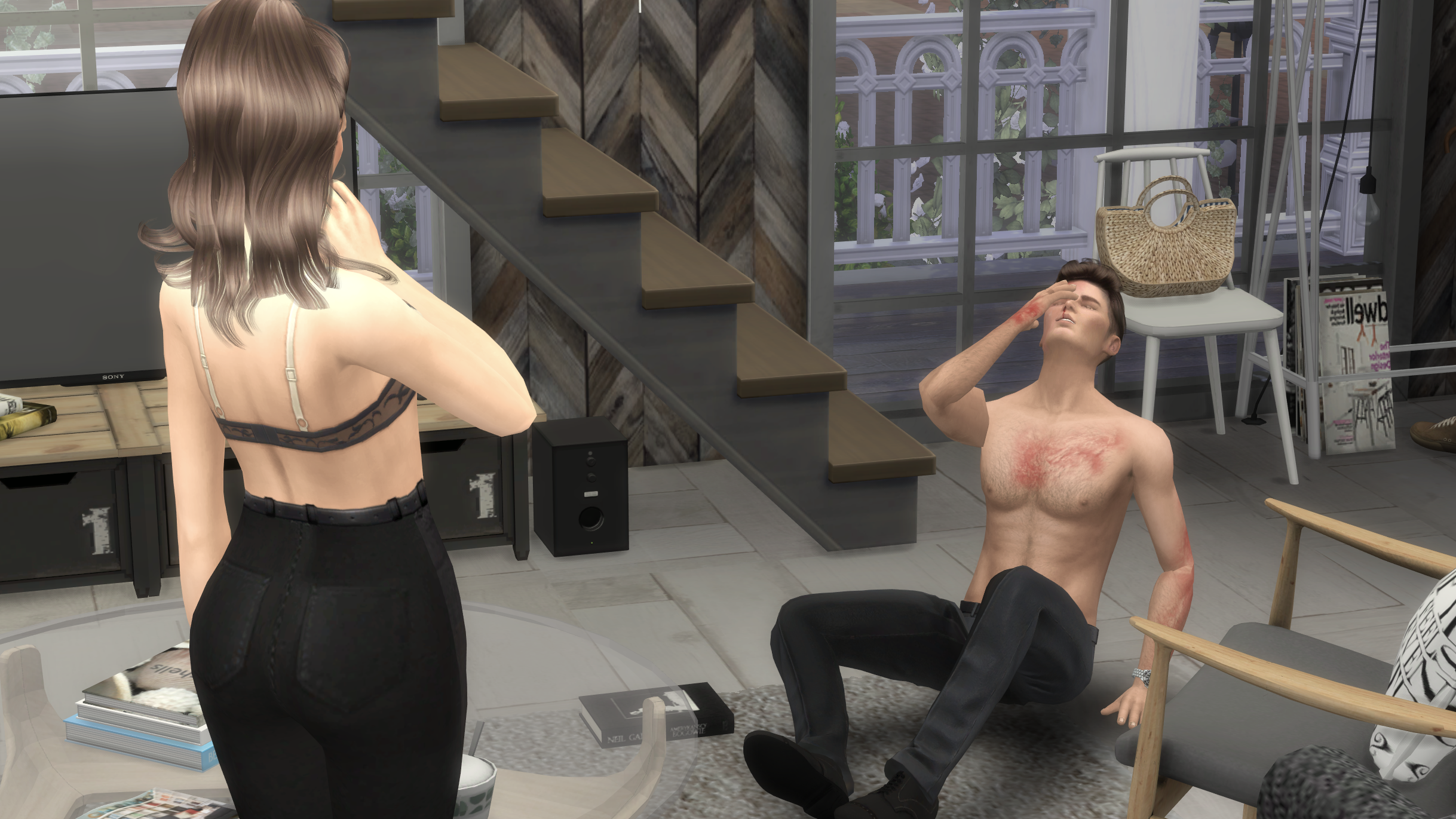 Once the paralysis of the surprise wore off and the pain of the assault set in, Eric grabbed his clothing, speedily got dressed and ran out, leaving behind a still frozen with shock Charlee. 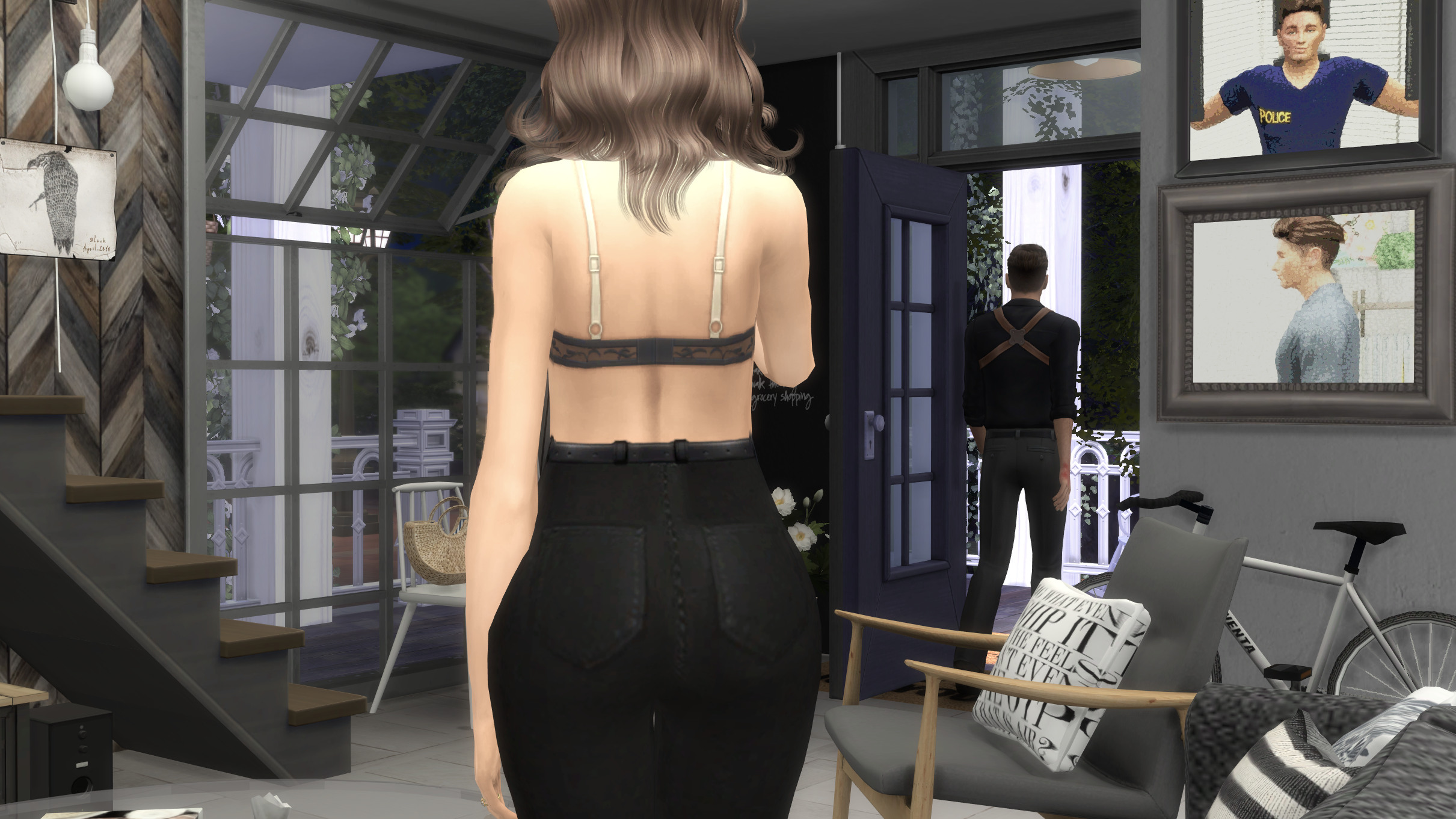 His facial expression reflected the pain he felt, and it wasn’t even the physical pain from the bright red marks and blood running from his nose, but a much deeper hurt. 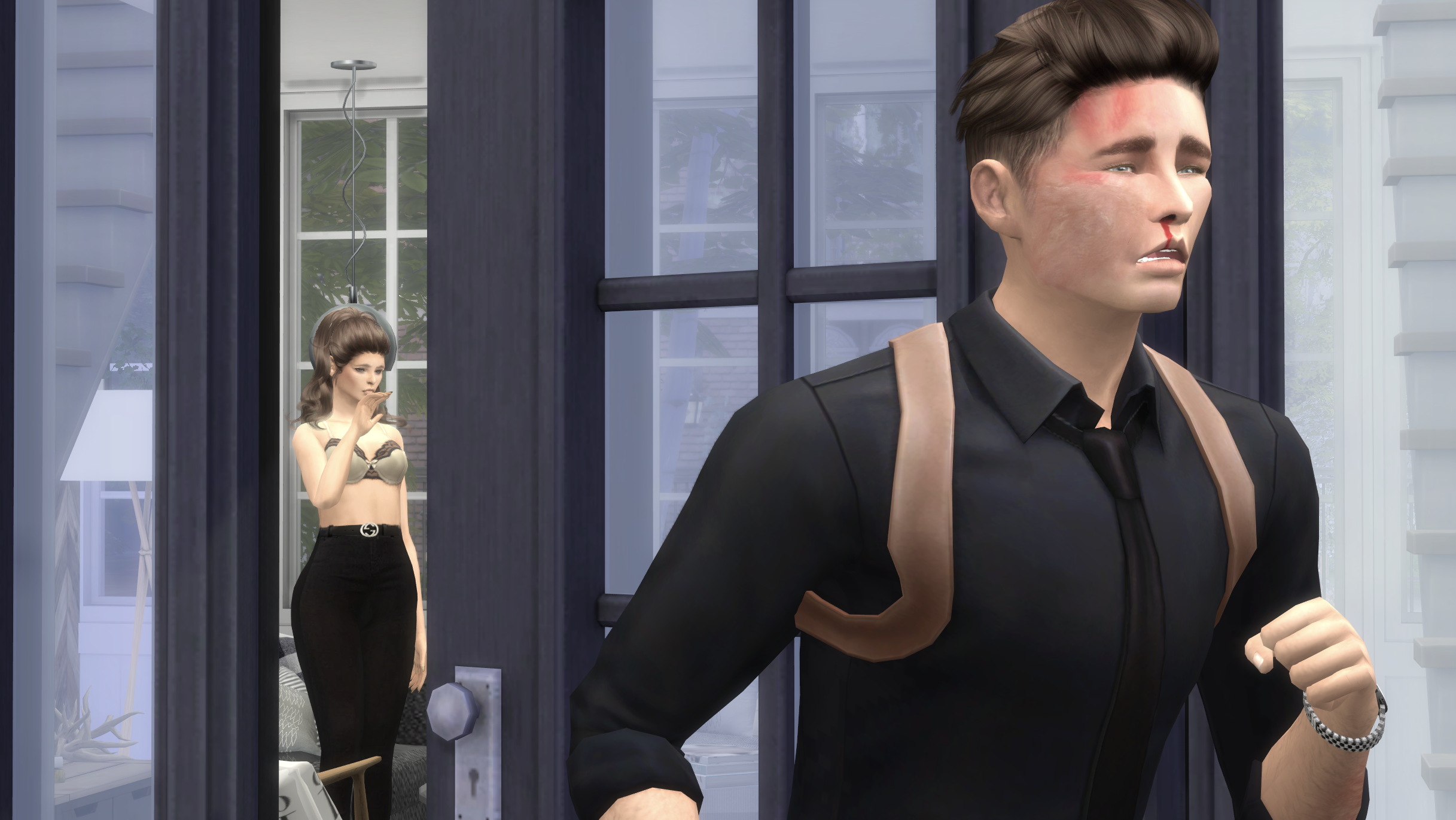