Forgiveness is the fragrance that the violet sheds on the heel that has crushed it.

She looked guilty and sad, standing before him, chewing on her lip.

“You didn’t come by for our daily run tonight …”

“After last night I figured I better not. Need at least one good eye to make it to work.”

“Eric, I am so sorry about that. I thought I could it, thought I was much better, I swear, I wanted to. Oh God, was that really me?”

Carefully and tenderly – like wings of a butterfly – she touched the area around his black eye, he nodded. 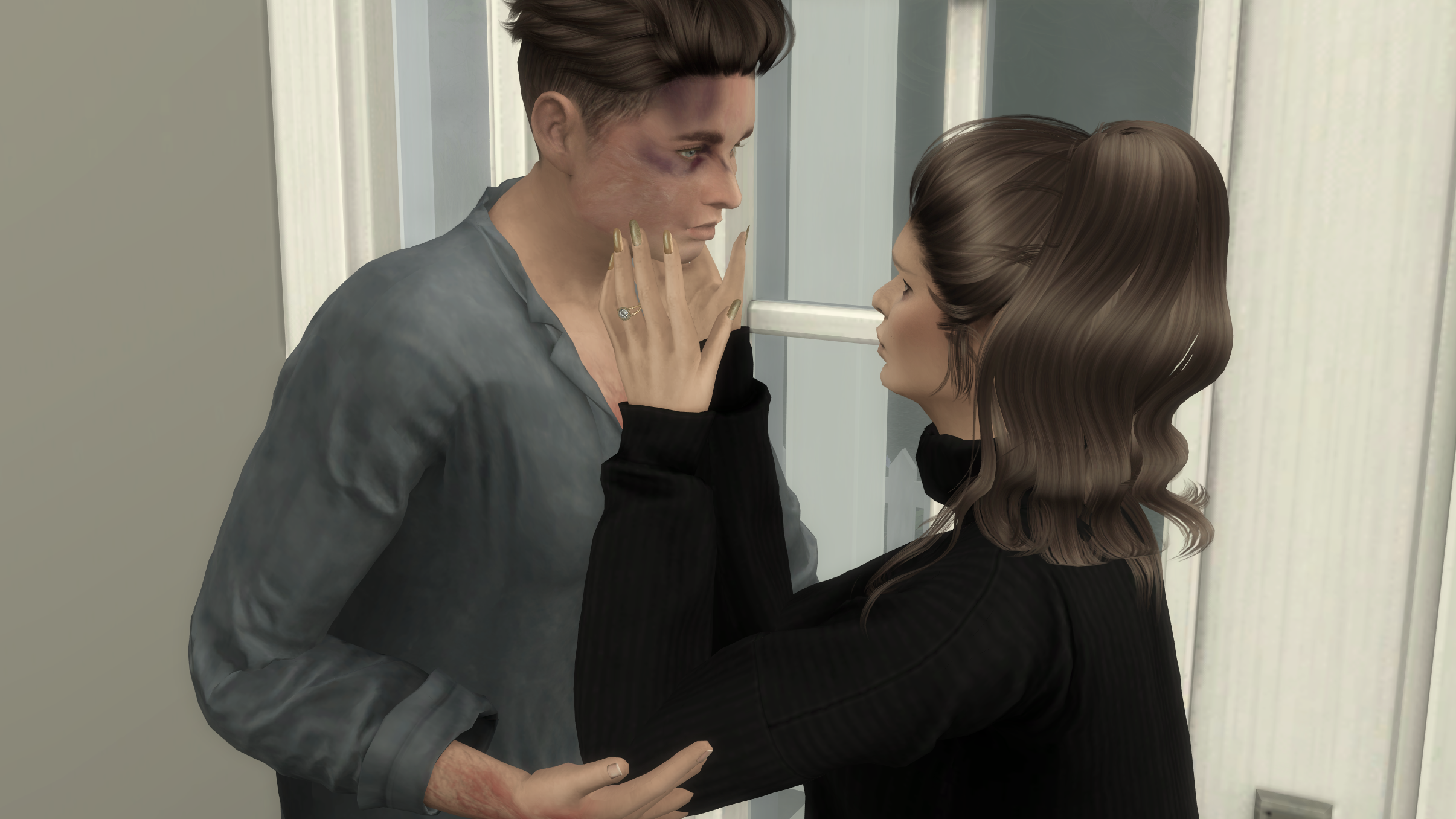 “Dammit, I didn’t mean to, you have to believe me. I never thought I could injure you like this. I really wanted it  … us … on the couch. It felt so good. I really don’t know what came over me.”

“It’s okay. At least the black eye is on the same side as my burn scar so it blends in nicely.”

“No, Charlee, I don’t. We knew this could happen. Well, maybe not exactly this, I admit it was a pretty big surprise to me as well, never thought my own wife would lay me out with a coffee table book, but we both knew it was probably too soon. Painful lesson learned.” 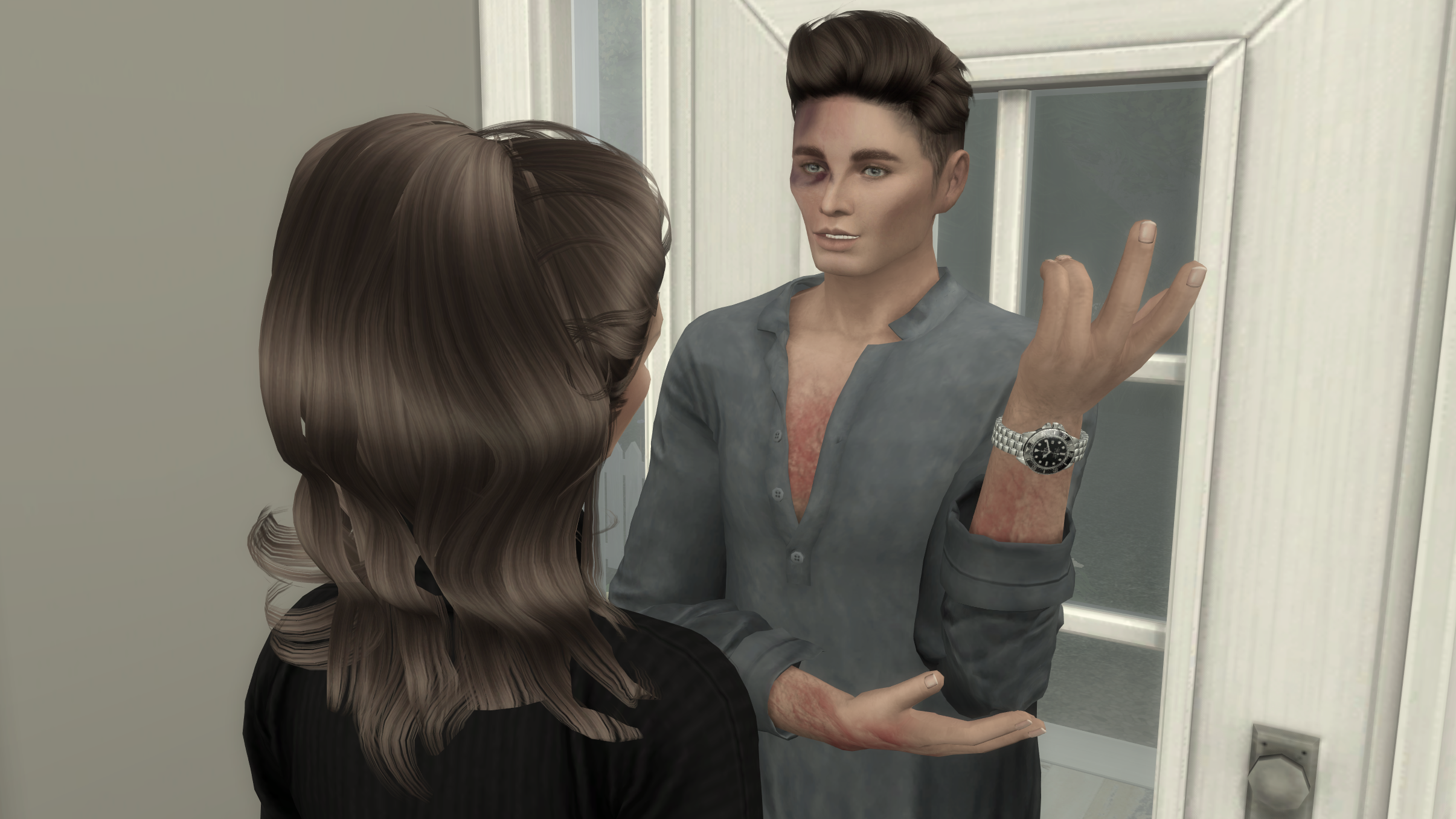 “Can’t believe I hurt you so. God, I feel horrible.”

“Ah, just love with extra feeling. And it tremendously amused my new partner at work. He has a very distorted view on relationships from the sounds of it. This didn’t exactly disprove him.”

“Eric … do you think I could stay over tonight? I miss you so and I really don’t want to be home alone with all this guilt.”

“Don’t you think that may be a bit soon after last night’s fiasco? The Beach House has no free beds and sleeping on the couch is risky, my dad wakes up a lot at night and haunts the house. Don’t want to give him a heart attack when he ends up sitting on me trying to sit on his couch. And how would we explain it to Jamie when he wakes up and finds you here? And where is Cait?” 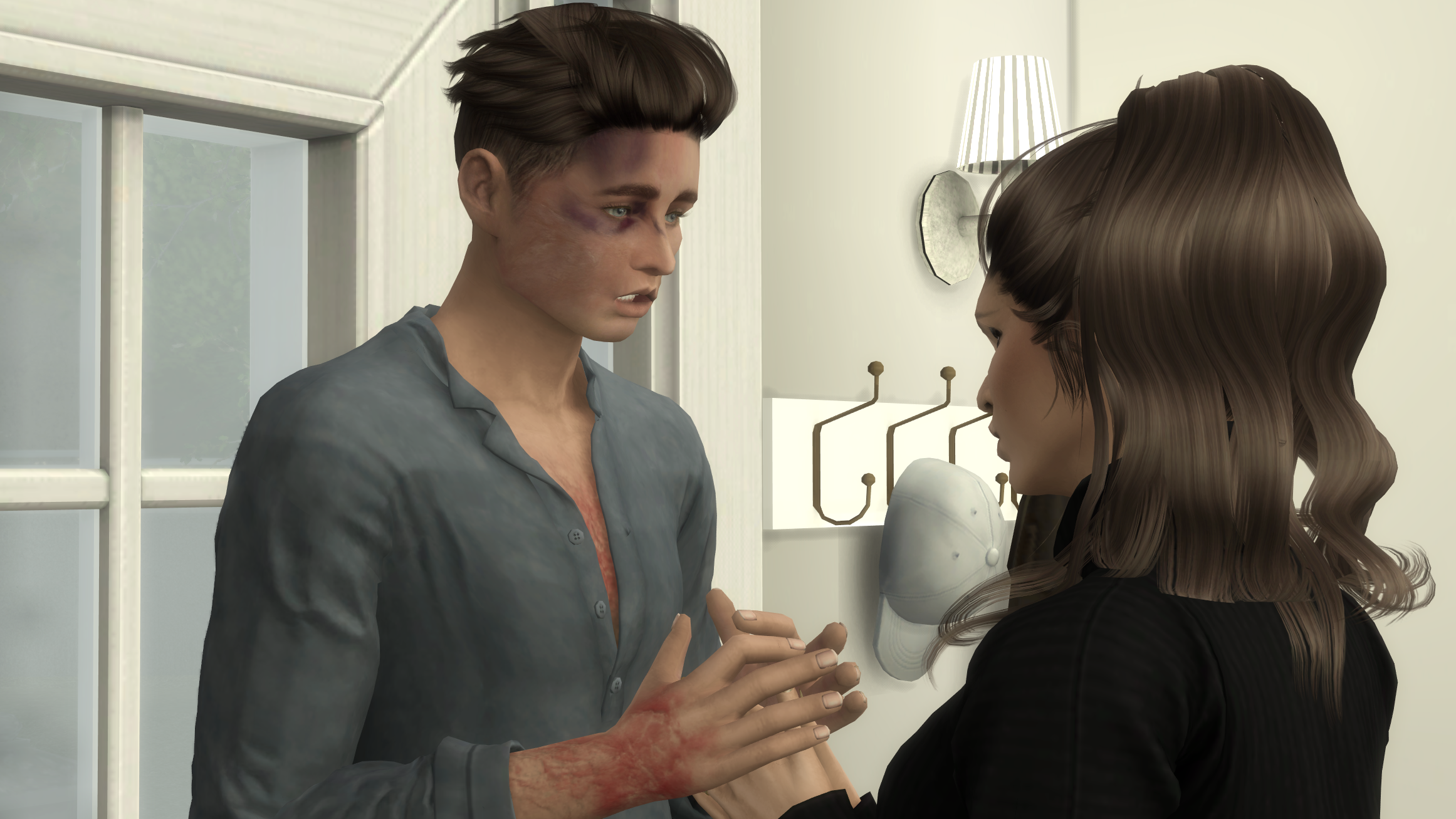 “At Ewan’s. She begged me to go. I just dropped her off and came over here. She is obsessed with Courtney’s room. Ewan offered to buy all that stuff for her, but I declined. Hope you are okay with that. I don’t want her spoiled like that.”

“Yeah, I told him a million times to keep that credit card holstered if it comes to our kids. You know what’s most ironic? I never had a girl in my room at the Beach House. Part of me wants to say yes, just because of that.”

“What? You never brought home a girl when you were younger? Doesn match the stories Ewan tells about you two heartbreakers.” 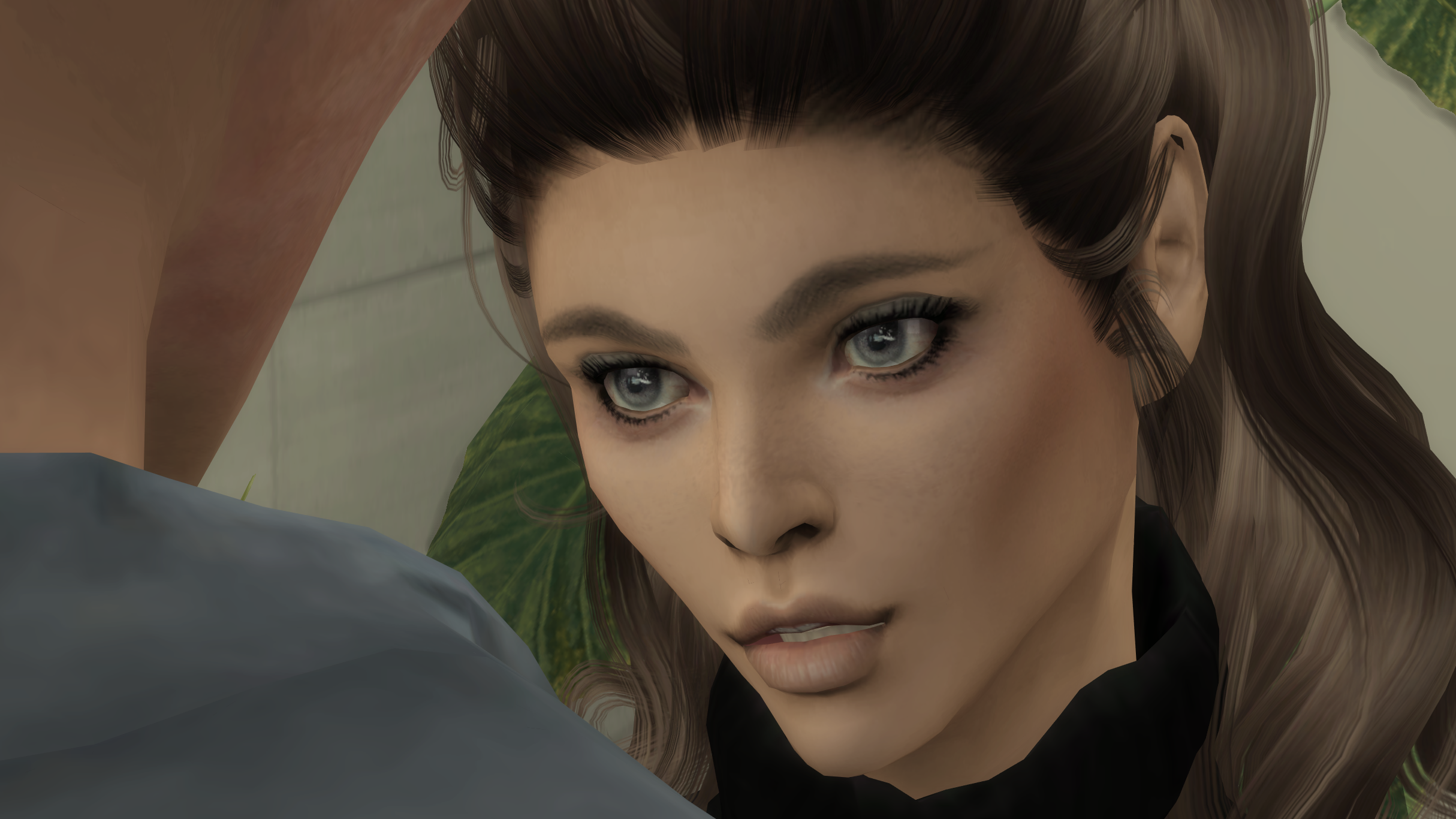 “Oh, I dated, just like he did, if you can call it that. More like serial speed dating. Well, at least until I had my accident. But I never was even remotely serious enough about any of those girls to bring one of them home let alone to bother have them pass parental inspection. Not until I met you, and you passed parental and my grandparents’ inspection with flying colors but we never stayed overnight here together before we moved in together.”

“Now I really want to stay. Just to feel extra-special.”

“All right, fine. Just promise not to beat me up again.”

Giggling they ran up to his room, quietly sneaking by Eric’s parents’ and Jamie’s doors. 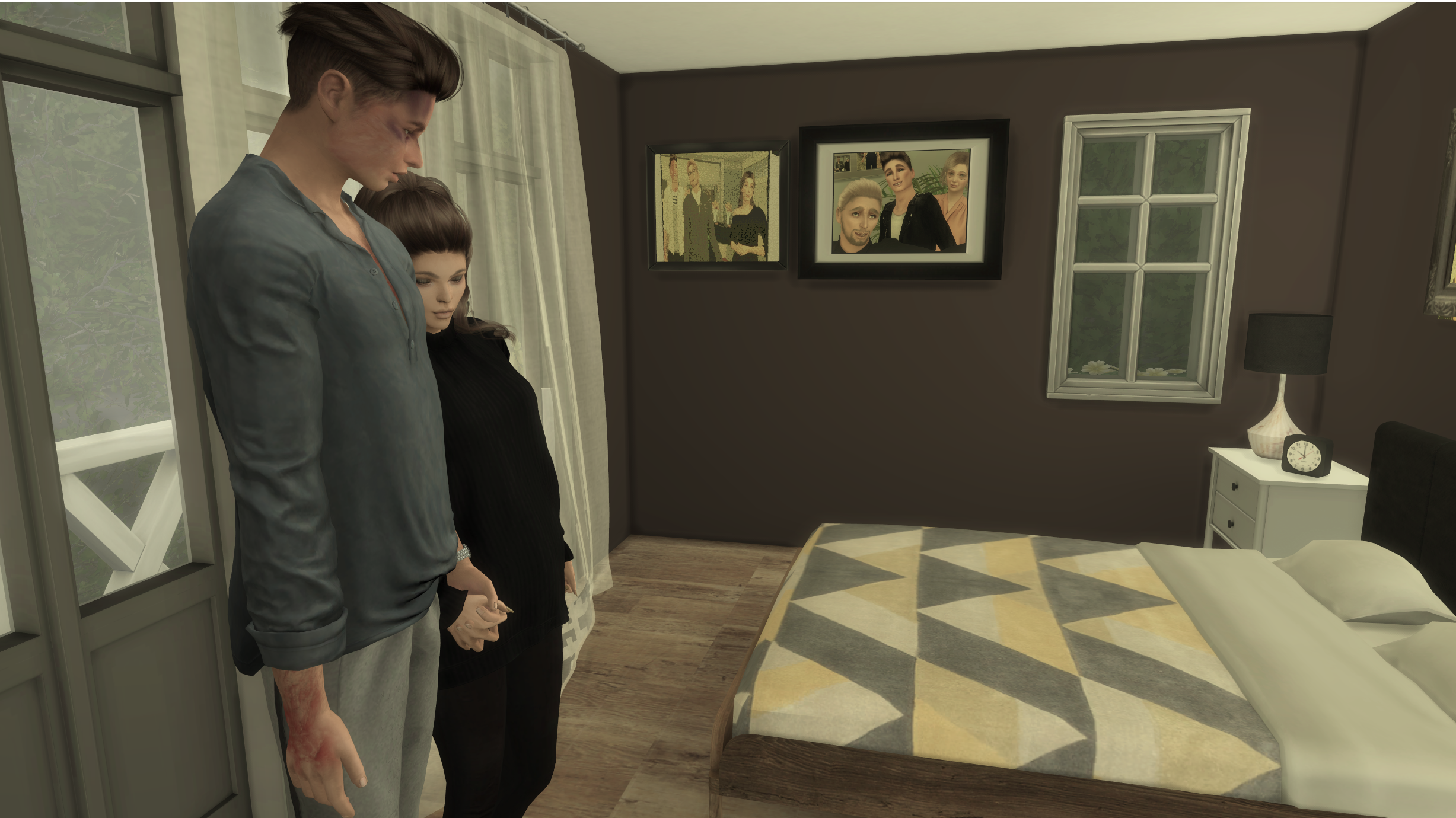 She looked around the room, it seemed fairly bare, save some photos and some older paintings he had done in high school and college on the walls, since it had functioned as a guest room until Eric moved back in.

“Eric, I want to try again. I feel that tonight I can do it.” she told him.

“No, Charlee. Give it some time and I do need one eye that’s not swollen shut to drive to work. Can’t have my superiors suspect I joined some secret fight club.”

He smiled at her, she nodded.

He gave her one of his shirts and an extra toothbrush, then they turned in, talking quietly about their past, present and future plans. 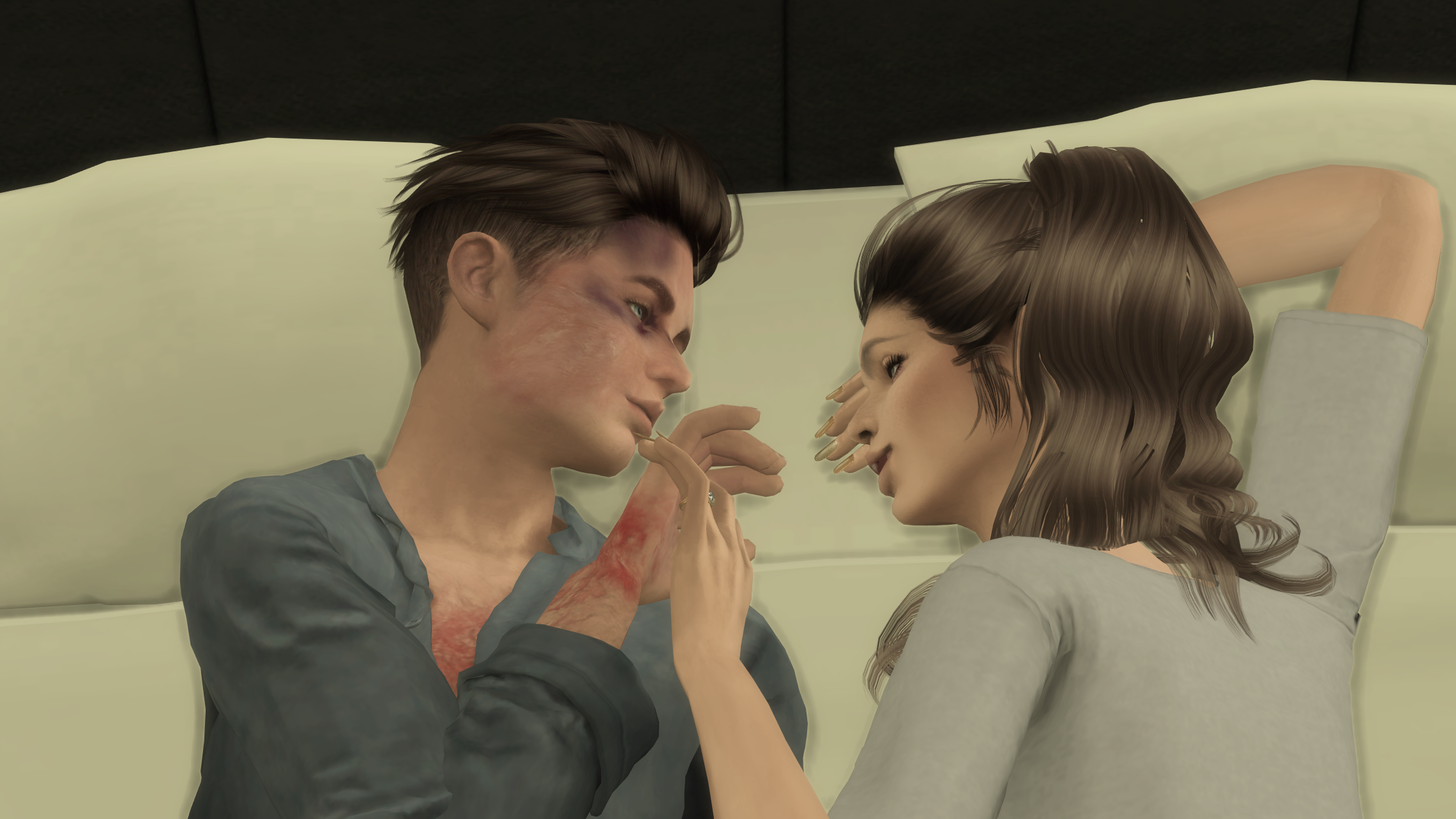 They fell asleep, side by side in his bed, but in the middle of the night Eric was awoken by her kissing him, drowsily he returned the kisses, her hands began to wander, suddenly wide awake he stopped her, but she pulled free and continued.

His attempts to return the favor were stopped, she shook her head, so he held on to her.

“Charlee, don’t. You won’t believe how hard this is for me to say, but you are pushing it, and it may backfire. Nobody wants that. I rather wait till you are really better. Just lay with me, okay?” 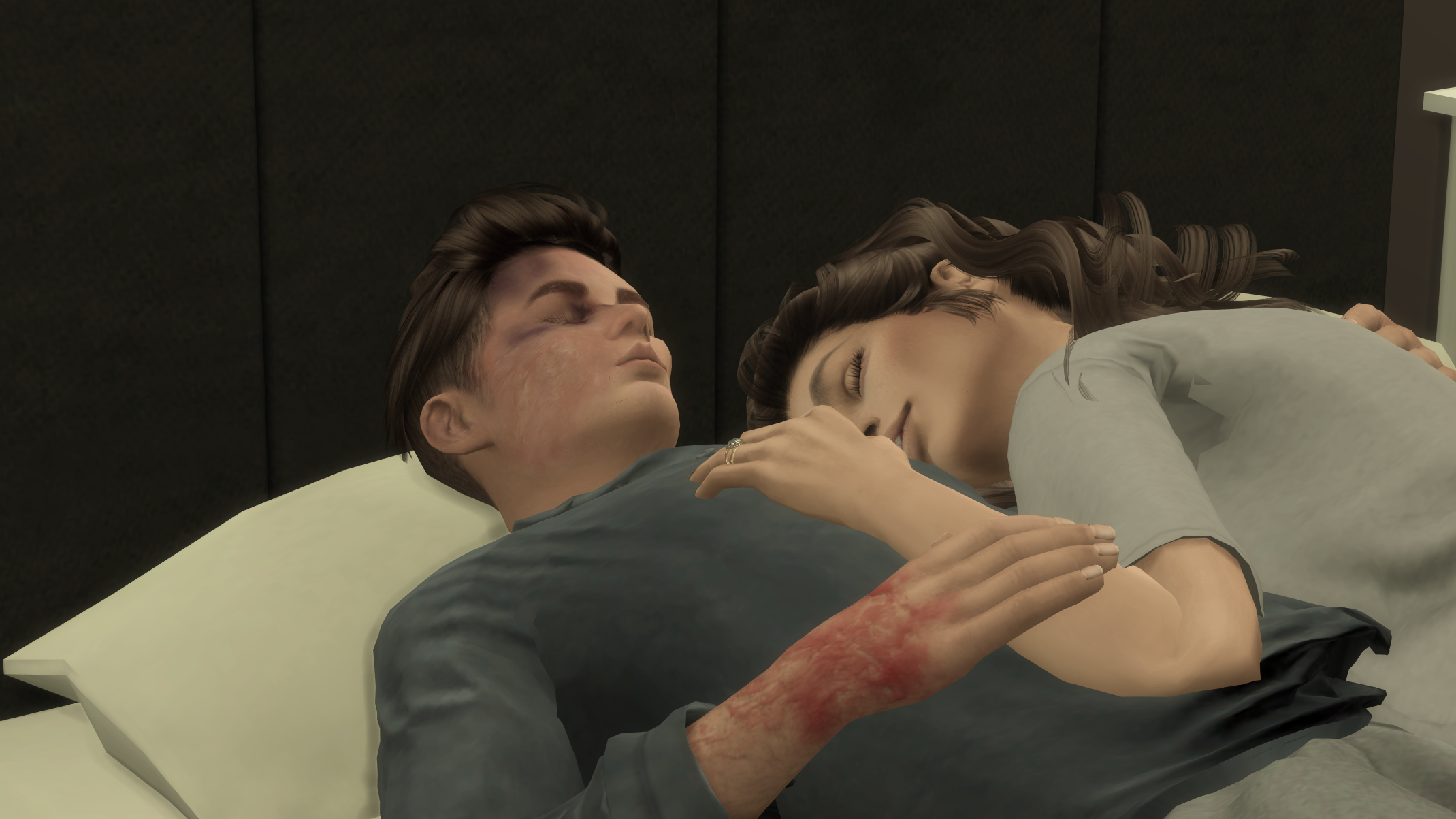 The next morning, already hours after Charlee had covertly snuck out at the first crack of dawn and gone home to avoid uncomfortable moments, Chase and Eric met in the kitchen as Eric was about to leave for work and Chase was on his way to get coffee.

“Great, thanks for asking dad.”

“You two were very quiet, I appreciate that.” 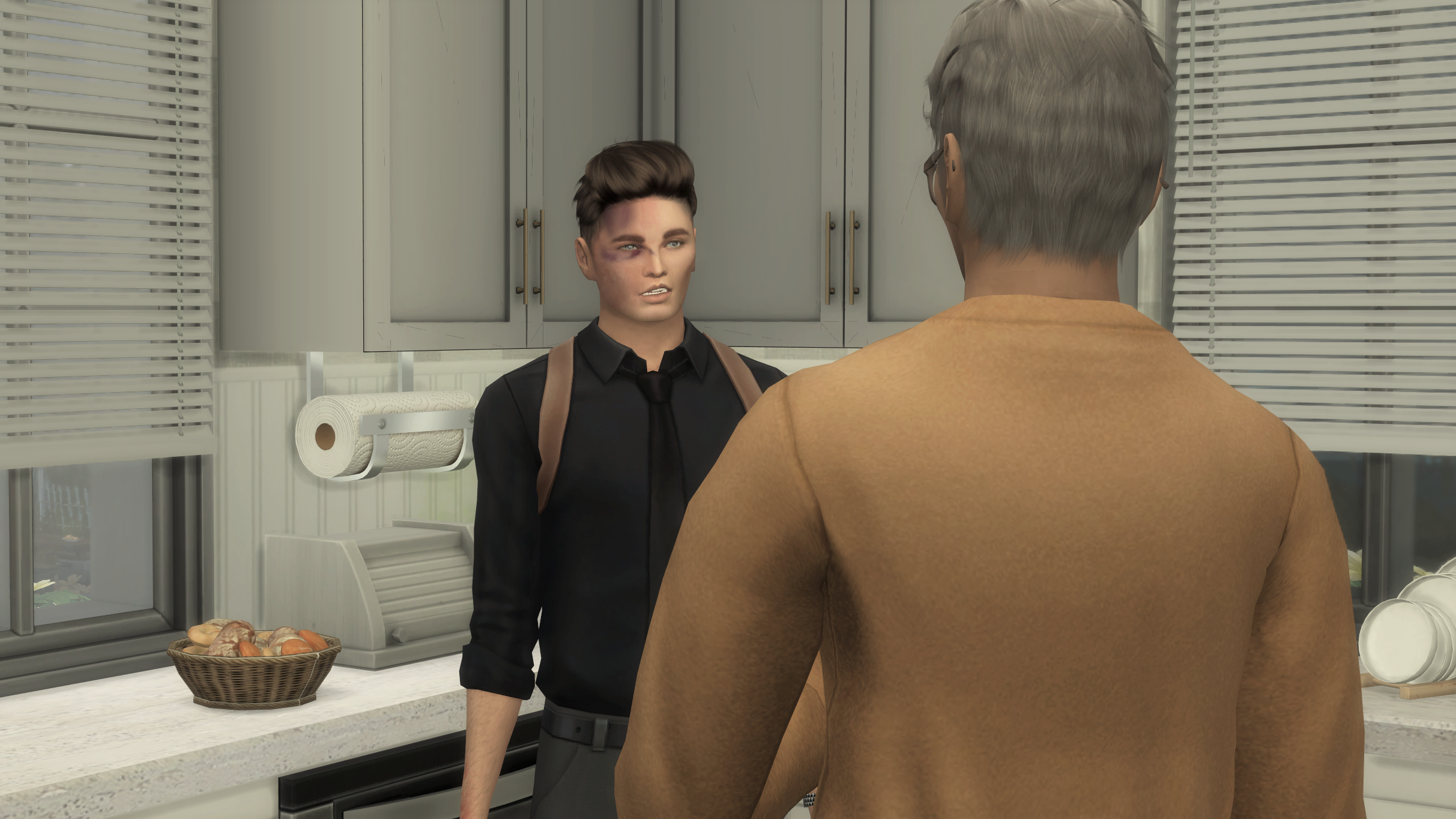 “I know she stayed over. In your room.”

“Don’t even try, kid. I saw Charlee in the hallway this morning sneaking into the bathroom. I know.”

“Eric, she was wearing one of your t-shirts and not much else. Your mother and I were young once too. I know the walk of shame when I see it. Good for you kids.” 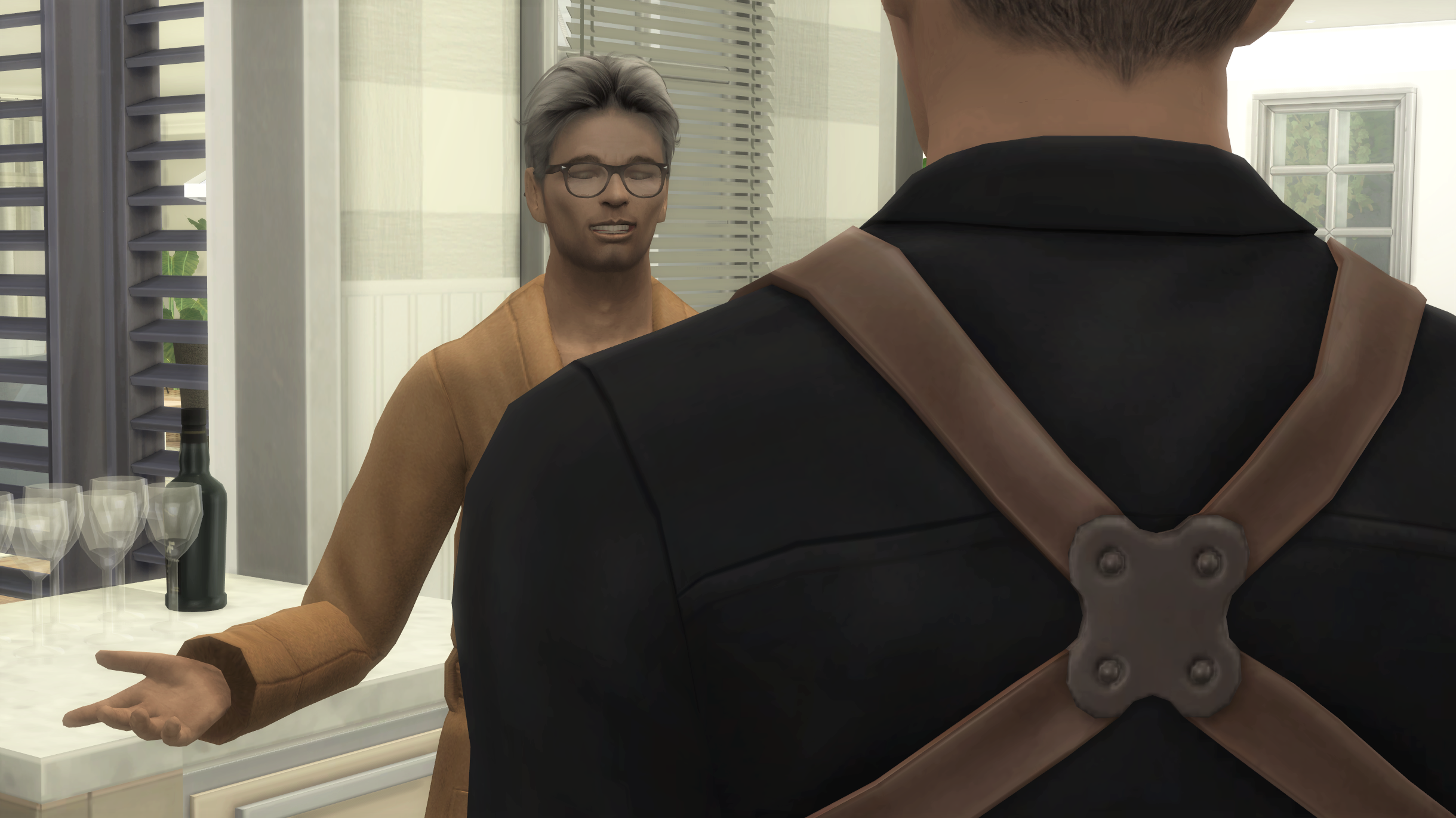 Eric blushed deeply as his father pat him on the back and went about getting his coffee while wearing a knowing smirk, making Eric smile too. There was no use getting into way too private details with his dad about what did or did not happen last night.

The Cameron grapevine was legendary. Not much ever stayed hidden, and if, then usually not for long.

Eric made it through work, albeit a lot more distracted than usual. His mind kept going in circles around the true meaning of the recent developments.

Was this actual progress, the fact that she came to him and spent the night practically laying atop him? Despite his shiner saying otherwise? Would it really have happened this time, had he not stopped her or would she have freaked out again?

He went over to see Charlee after work, once Caitlin got all her excitement about daddy being there out of her system and went to go play with her dolls, the adults got their moment to speak freely. 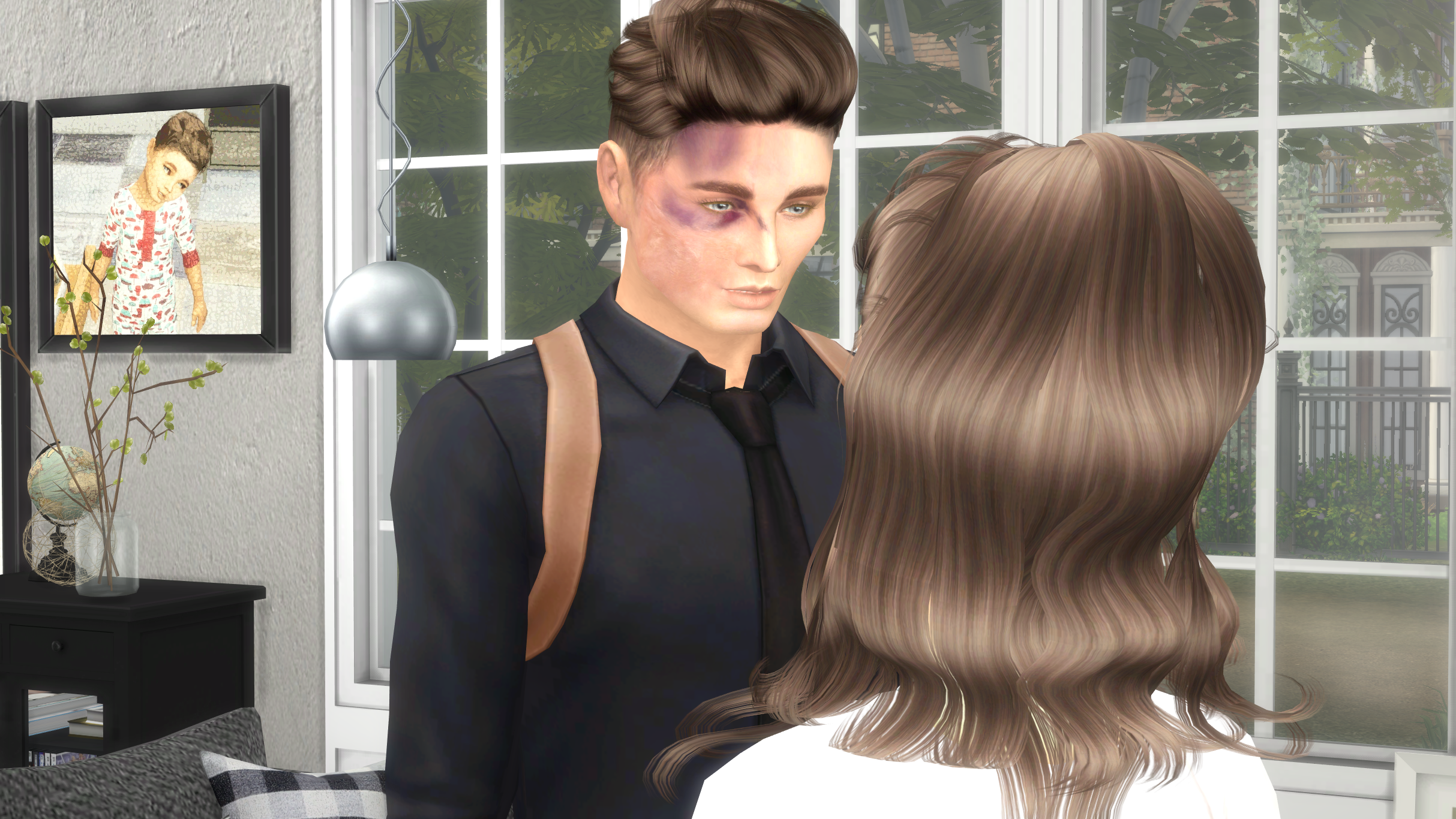 “Your eye is looking better every day.”

“Yeah. I wanted to see how you are doing today after everything. And I wanted to make sure that you bring what happened up at your next appointment with Dr. Holton. I know you weren’t raised to speak about bedroom things, but I think it may be important.”

“I think over a decade with your family has cured me of that. There isn’t much I haven’t heard by now.”

“Are you saying my family is a bunch of potty mouths?”

“No, of course not. Not all, but some are. Honorable mention goes to Ewan here.” 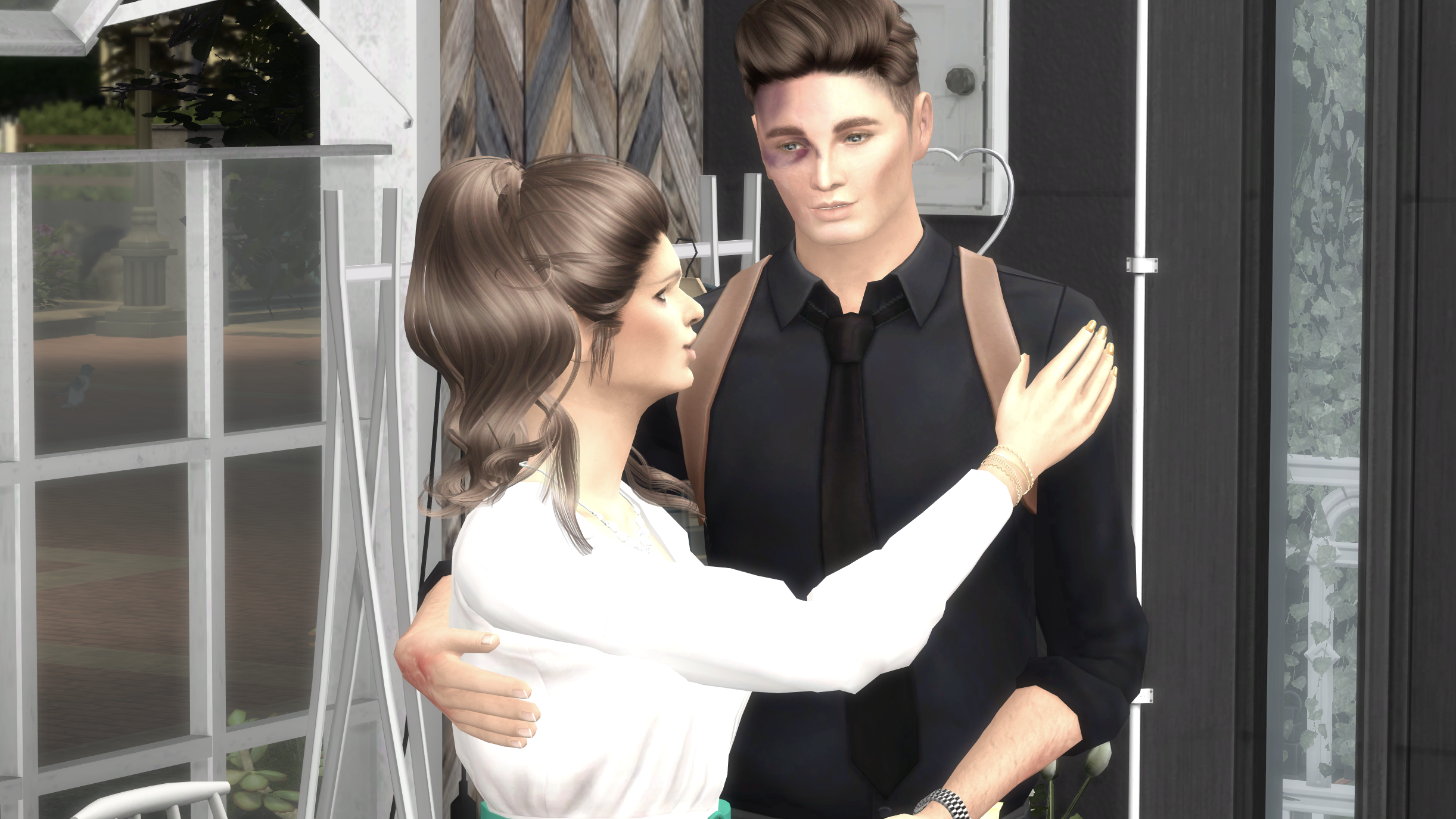 “Don’t tell him that. He firmly believes he is refinement incarnate.”

“He is, when the cameras are rolling or when kids are around. If it’s just us friends, I admire Ava for being able to handle him like she does.”

“Oh, never worry about Ava. Her petite stature is very misleading, she definitely can hold her own.”

“Thanks. If I didn’t know any better, I’d think you’re hitting on me.” 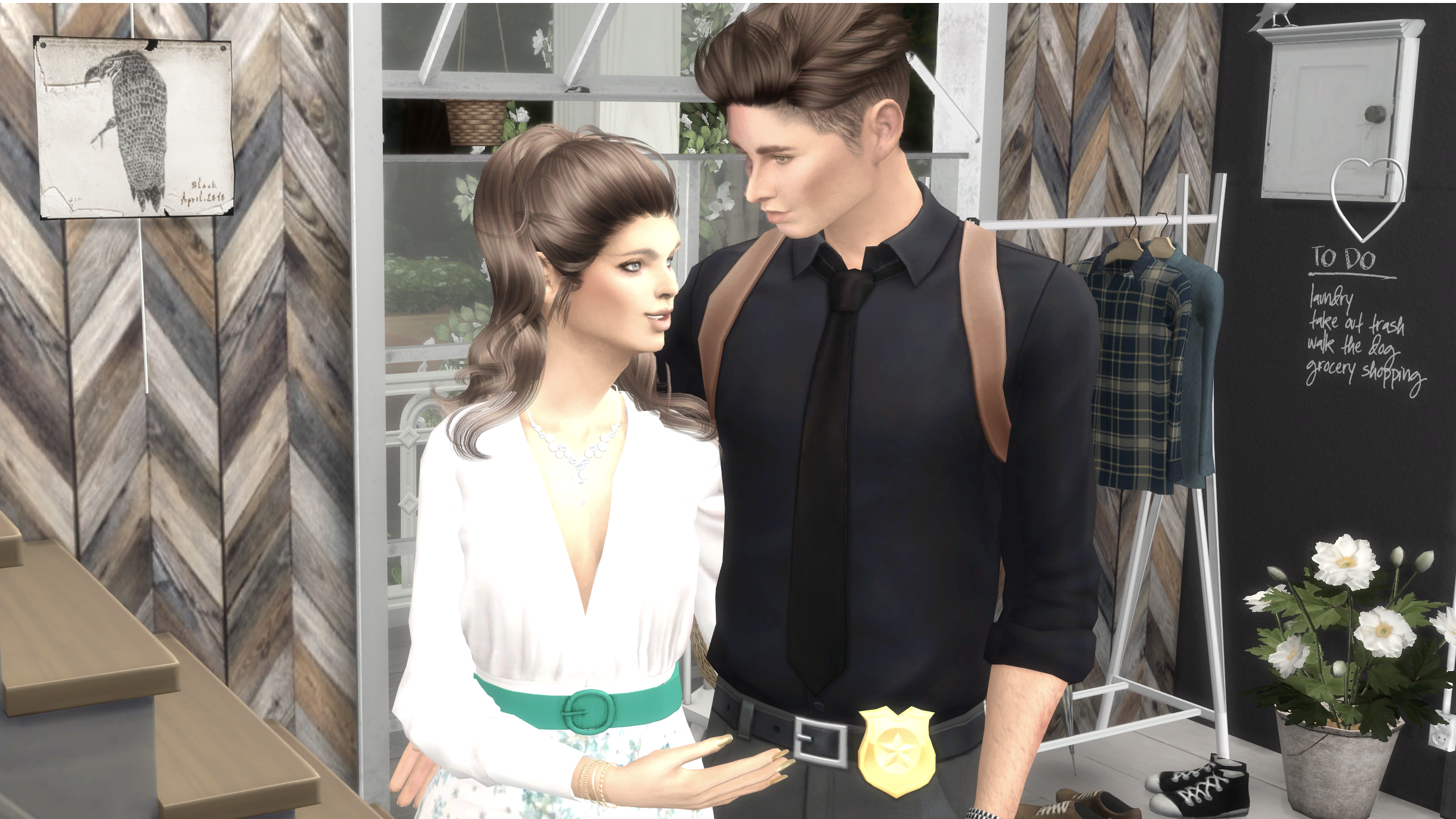 “I mean it, you’re smiling, in a good mood. I like that. I miss hearing you laugh, your laughter is so contagious. The only one who could make you laugh of late seems to be Ewan. But you do seem upbeat today.”

“I almost got laid last night, Charlee, by the most beautiful girl in the world. Of course I am thrilled. Under normal circumstances any man would probably be frustrated by getting so close and then stopping, but for us that still means progress.”

“I am happy too, but am worried that it means that I can only get there if I am in control. Part of me wishes you had not stopped me, so we’d know for sure. If it is what I think, a control issue on my end, that’s not really great either, right?”

“That may just be until you subconsciously deem me safe again. Until then, which man would complain about a woman on top? Not this guy. Joking aside, I get it though. All your life you have been bulldozed by your parents’ wishes and demands. Now that your soul is revolting it just wants you to be in charge all the time. Not a big shocker.”

“Eric, I want you back. You and Jamie. I miss you two so much. Move back home, please.” 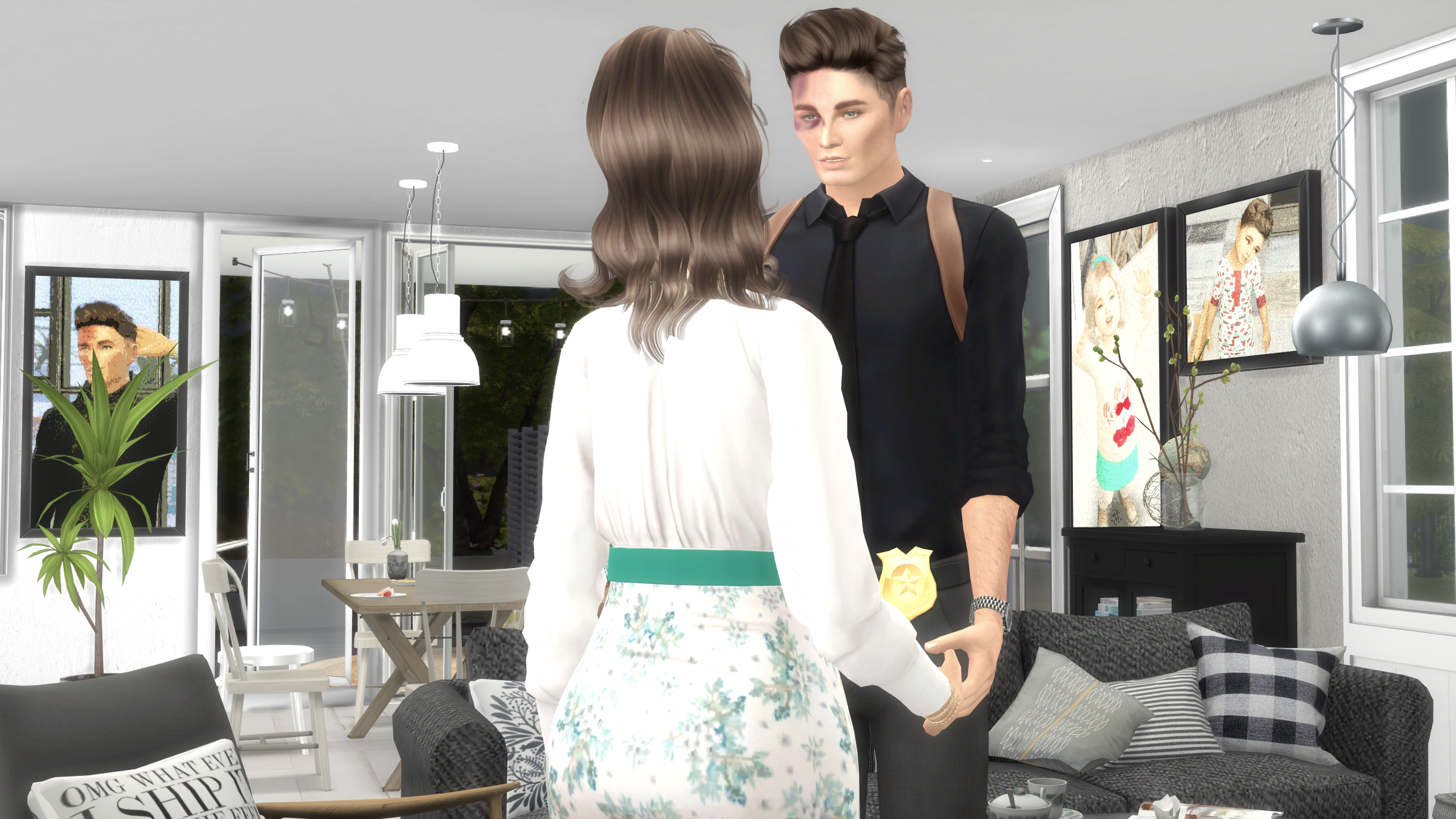 “No, I don’t want to have to sneak in and out of houses at night like a cat burglar to be sort of intimate with my own husband and to sleep in the same bed with him.”

“I am not sure how Dr. Holton would feel about us being sort of intimate already at all, let alone about the sleeping in the same bed part.”

“No need to tell me! But she warned us about getting antsy.”

“She also said that there is not like flags or fanfares going off when I am really ready. Maybe I am ready. Only one way to find out.” 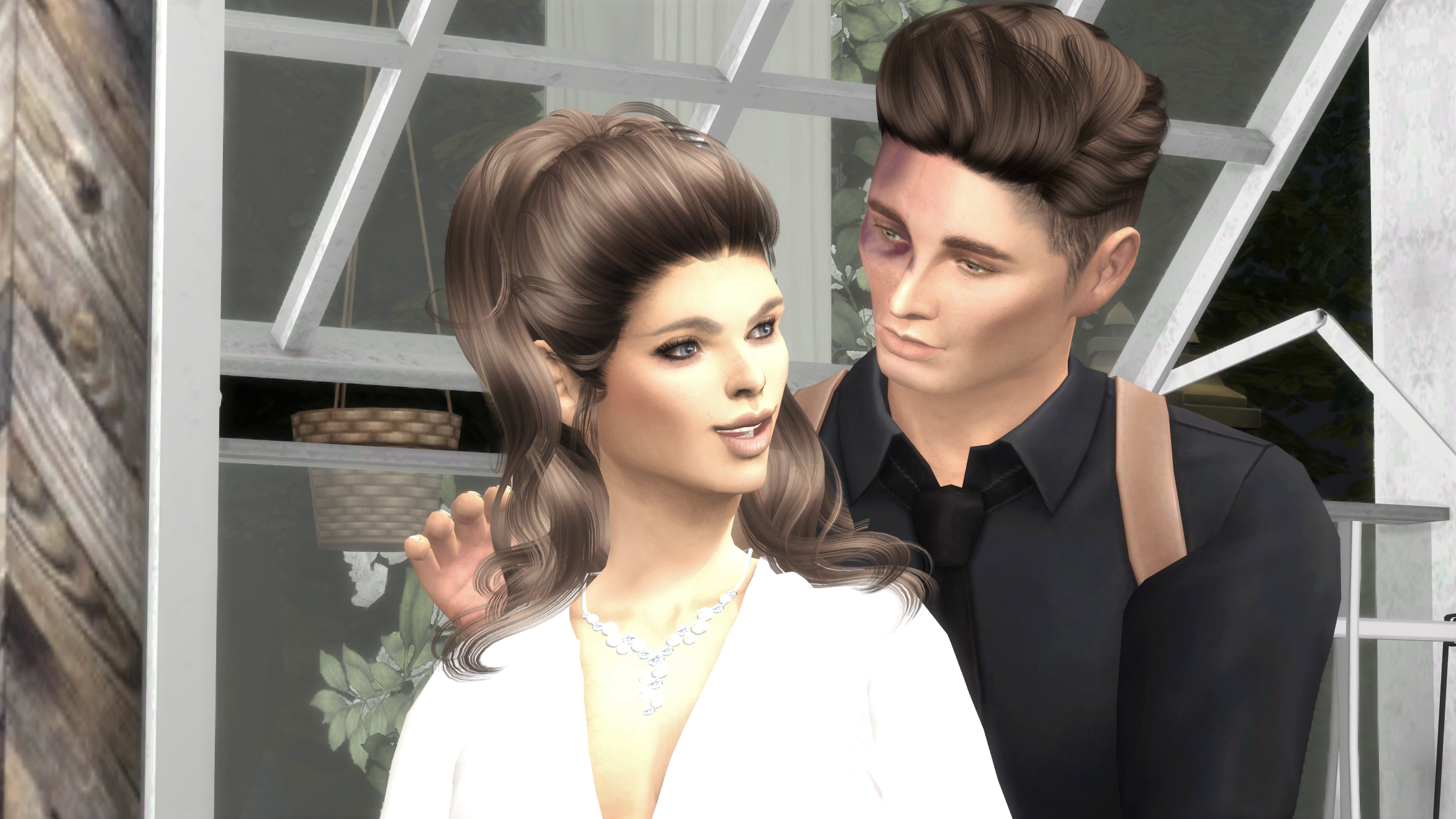 “Well, that would have to wait till the weekend then though, to give any potential black eyes time to heal a bit before I have to go back to work.”