All endings are also beginnings. We just don’t know it at the time.

Eric was tensely hammering away on the keyboard of the computer when his desk phone rang.

Internal call from the front desk.

“What?!” he barked at the speakerphone after slamming his finger on the answer button, only briefly interrupting his torture of the keyboard, stopping his colleague Carl in his tracks and causing him to look over their desks at Eric. 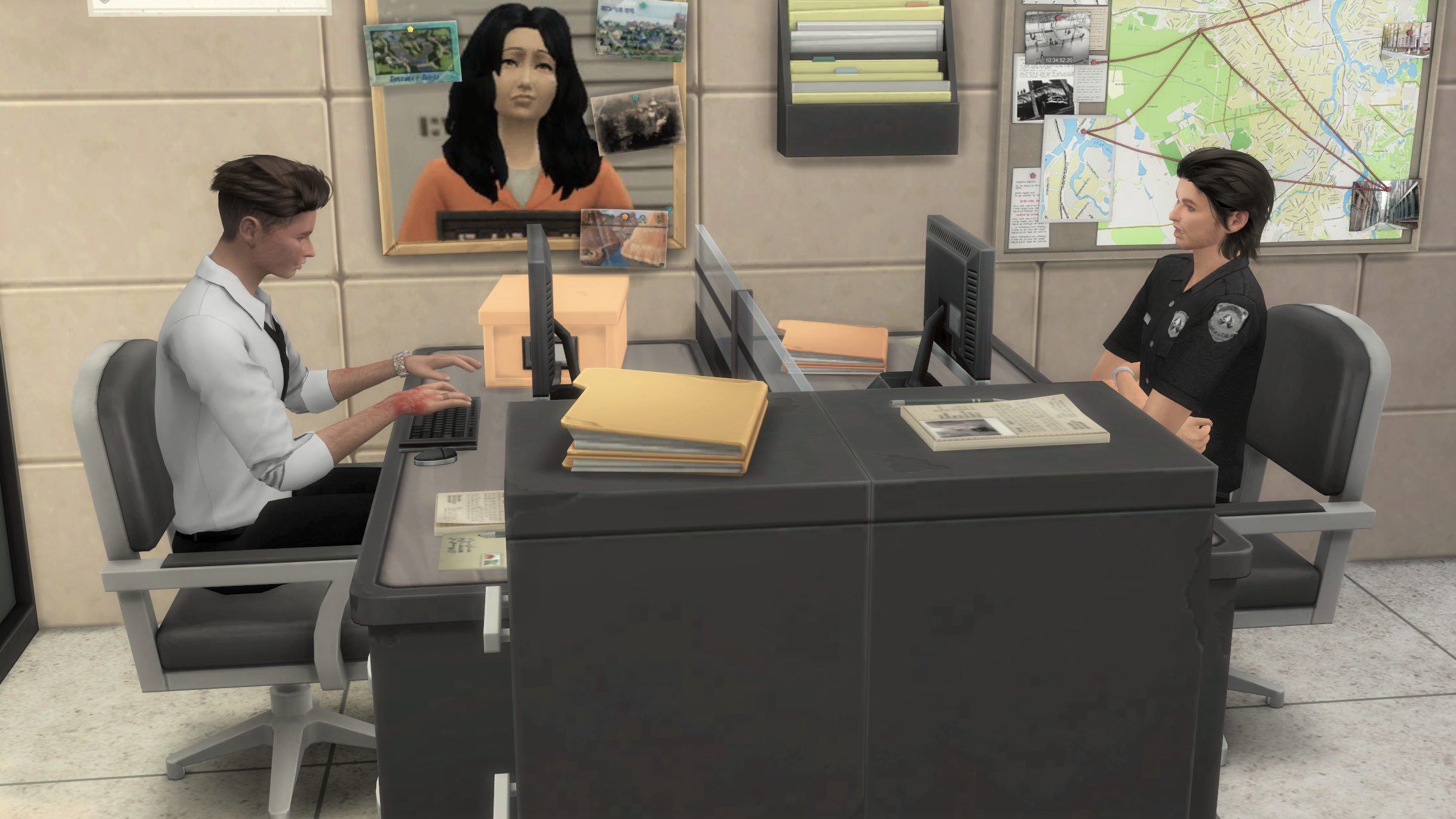 “Your wife is here to see you, Cameron.” it echoed from the speakerphone.

“Come on now, Cameron. Just come out and talk to the poor girl for a minute, man. Don’t be like that.” the metallic sounding voice of the Front Desk officer pleaded through the speaker of Eric’s desk phone.

He hung up and inhaled deeply, then exhaled long and audibly, frowning, when he noticed Carl looking at him.

“What?!” Eric demanded, his voice a challenge.

“That’s what I thought!” 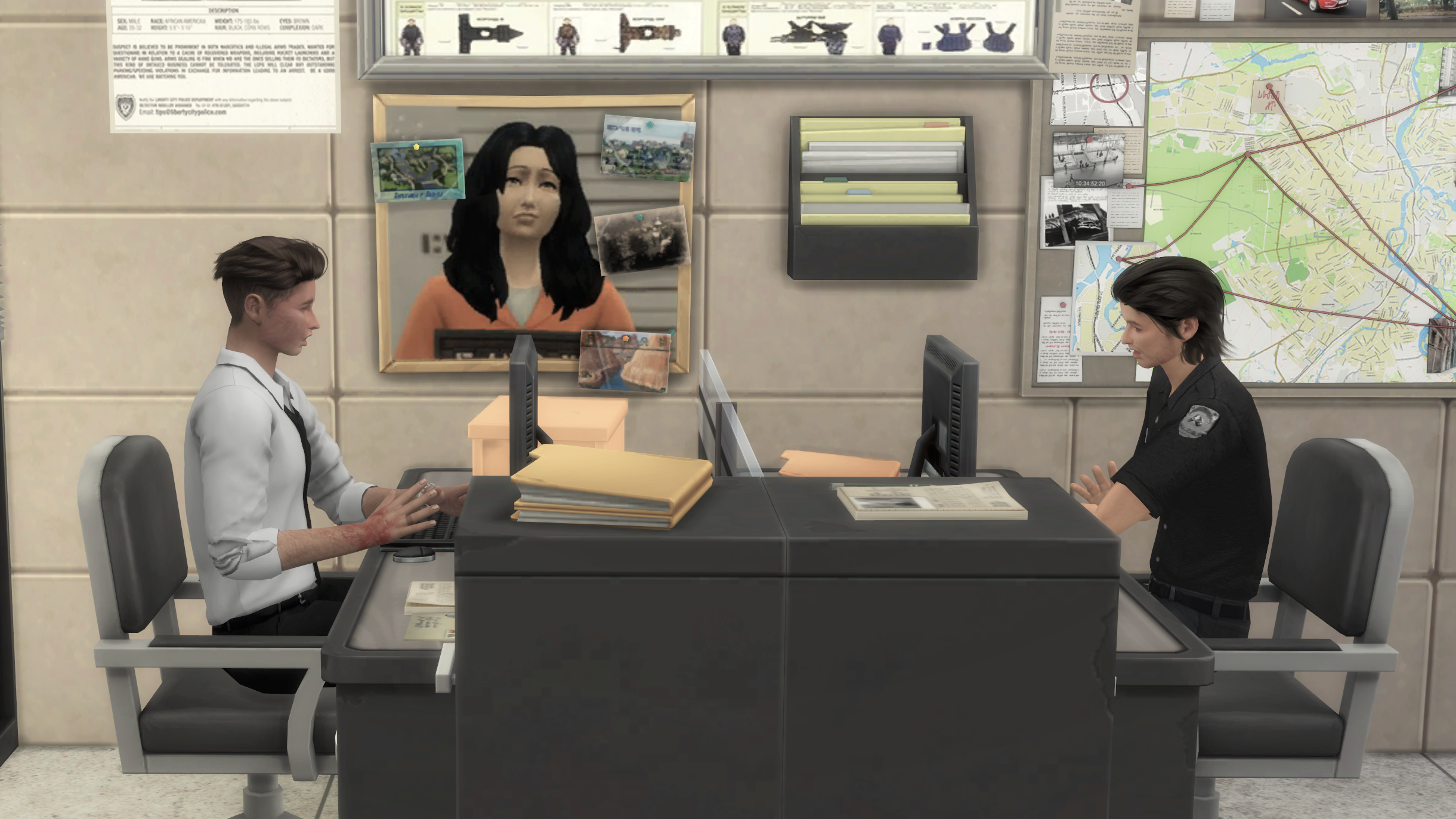 His mood had been in the dumps for two days straight, ever since he walked into a very dubious scene involving his wife and another man, he had cut off all communication with Charlee, was in a permanently bad mood and nobody felt like becoming the reason Eric would finally snap. He was known to be very composed and rational, seeing him like that made obvious the inner turmoil he had to be facing. His usual kindness had been bittered by some terrible experience, so much was clear to anyone who knew him, even though only a select few knew details.

Suddenly he jumped up and rushed out to the reception area, where Charlee looked at him with some relief.

“Eric, thank goodness. I tried so hard to get a hold of your to …” she told him, but was immediately cut off by him.

“Why are you coming to my place of work now? Think it’s wise to air our dirty laundry where our sole income comes from, since the Gallery has been purely decorative not generating a cent of income, since it was evidently more of a love shack for many months?!” he snarled at her. 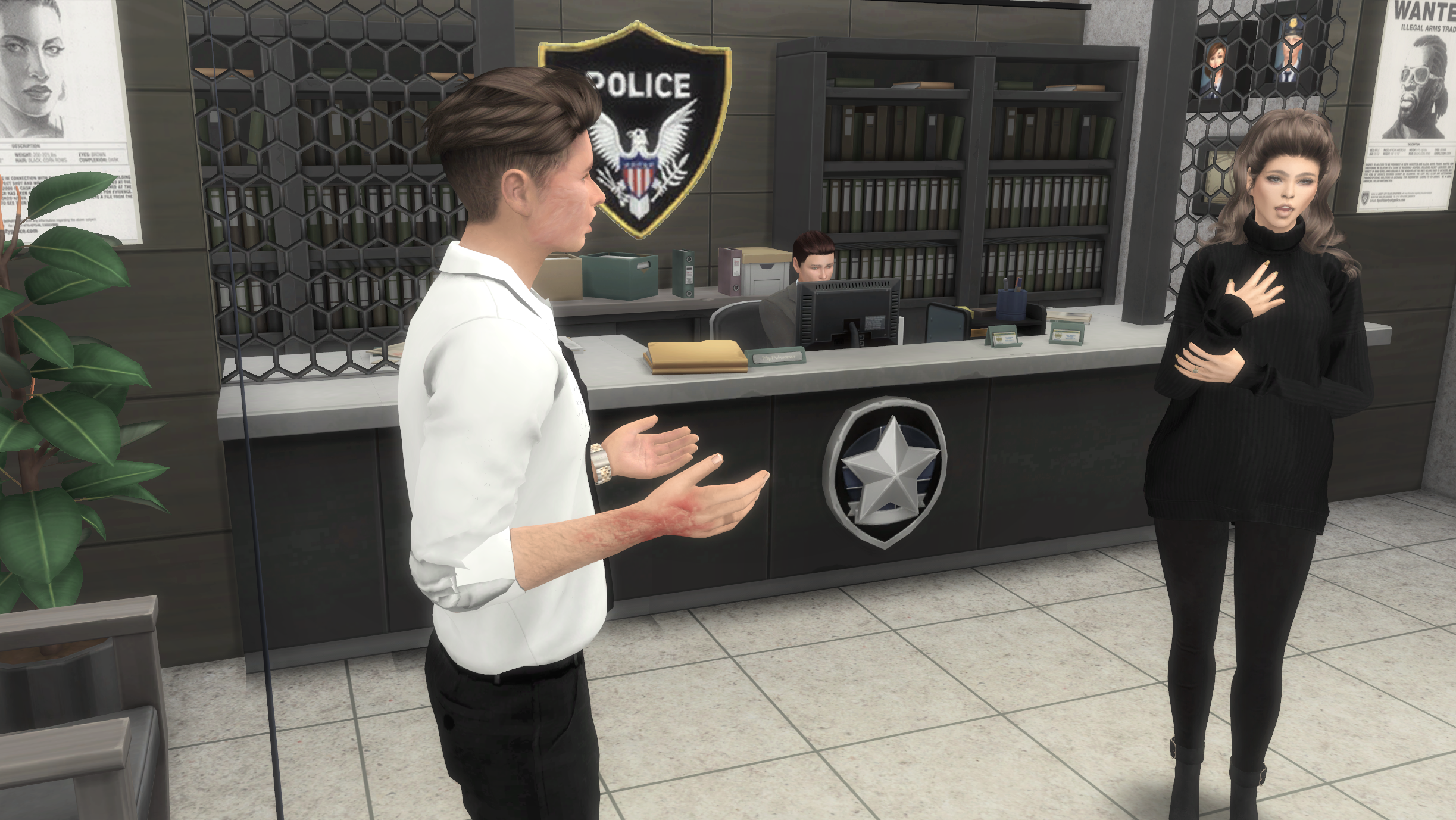 “OK, I deserve your anger even though it really wasn’t like that. There is a very good explanation. But please, calm down. Can we go somewhere more private to talk?”

“No. Some of us actually do real work at work and not just use that time to screw around with our coworkers.”

Charlee shot a humiliated glance at the front desk officer, who quickly looked away.

Realizing that airing their grievances so publicly at his place of work would not benefit anyone, he nodded. 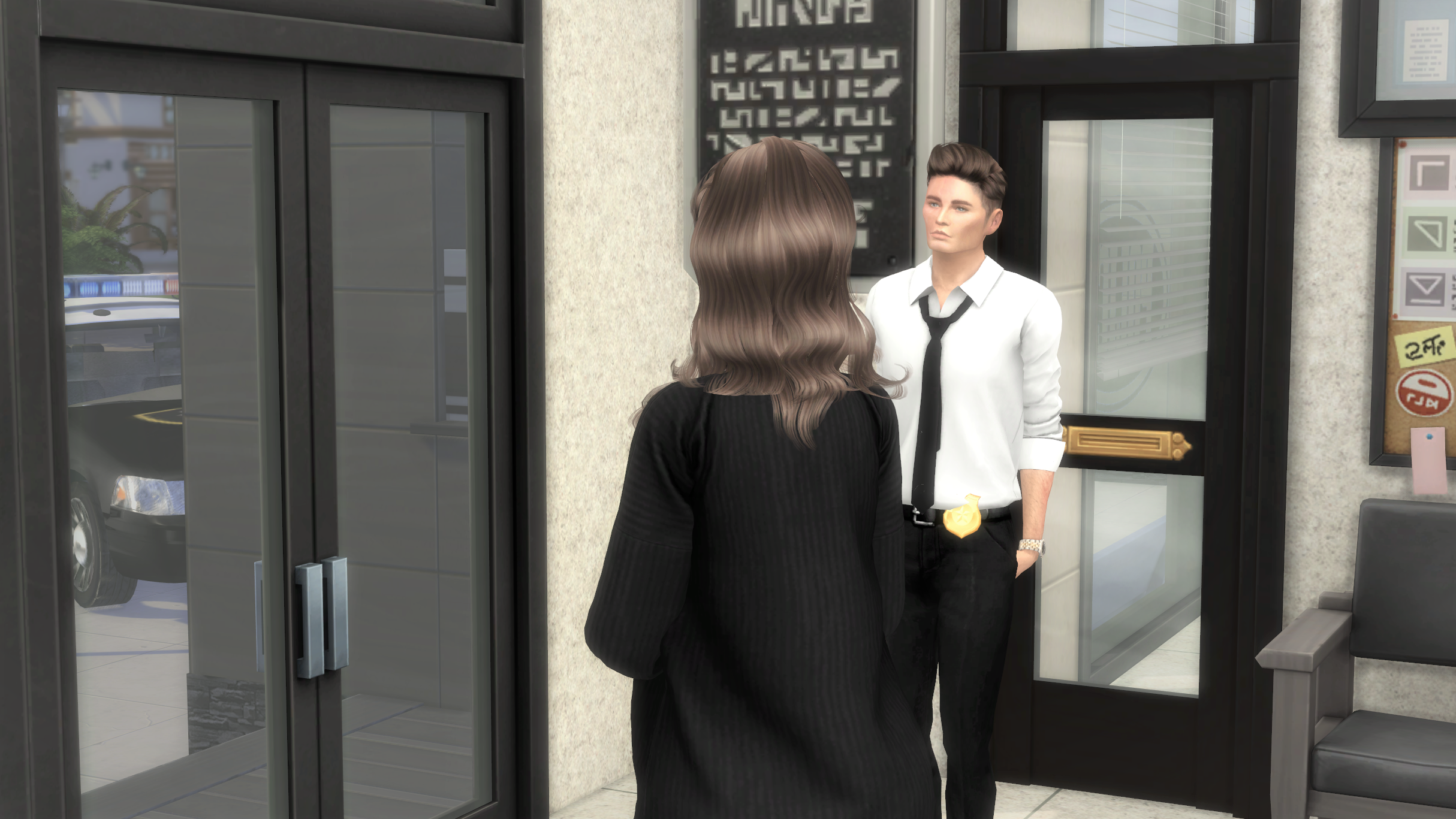 They went to a small room with two chairs facing across a table, a large mirror and a camera. Charlotte walked over to one of the chairs but when she realized that Eric chose to remain standing she did as well.

“Interrogation room. Aside from the large briefing room, we don’t have meeting rooms here, so this is the best I can offer with some privacy. Got a lot of work and not much time, so make it quick.” his tone was purposly and obviously disconnected.

“Okay fine. Eric, look, I know it looks bad and is hard to believe, but it wasn’t what you think. I was not cheating on you. I did this for us.”

“Oh, come on now …” he dismissed her words

“No, Eric, hear me out. Before he started working for me, Darrel was a life coach and is helping me get over my issues with a more atypical hands-on approach …”

“Charlee stop! I do not want to hear about his hands-on approach with my wife! Are you deliberately trying to hurt me more than you already have?! Why?! What have I ever done to you to deserve this?!” his voice reflected his inner pain. 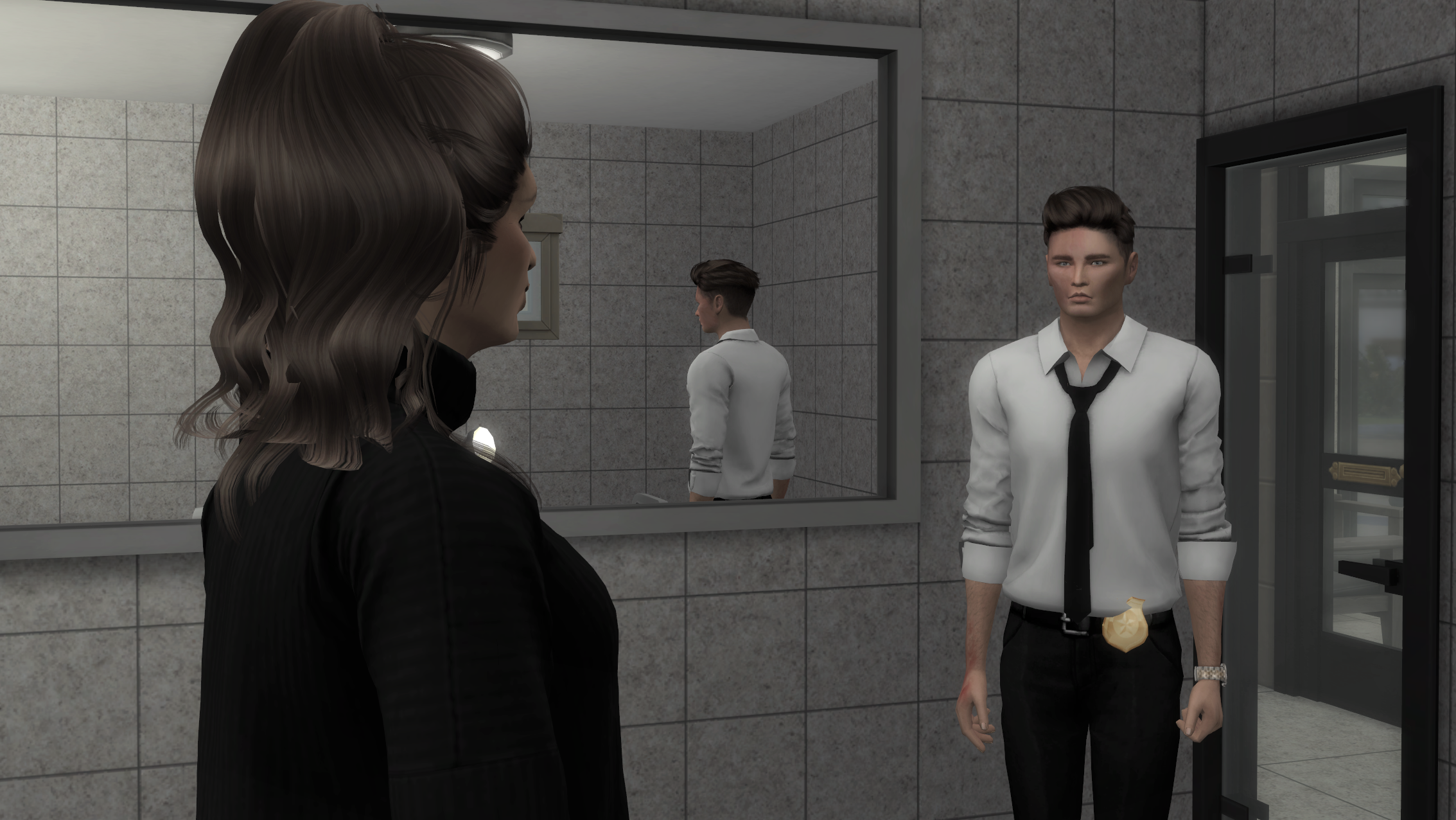 “But Eric, it’s the truth! He and I have been working on it for weeks to …”

“Weeks?! Wait, so what I walked in wasn’t even the first time?!”

“Fuck me!” Eric snorted a disapproving laugh, signaling he didn’t believe a word. Usually he never cursed in front of Charlee, but now he didn’t care.

“No, you do not understand. It’s not an affair. It is training. Desensitization … till I can fully stand being handled. I am getting better. You have noticed a difference, haven’t you? Little by little …”

“Charlee, I really cannot tell if you are so ballsy and think I am stupid enough that you can play me by hiding your skeletons in plain sight, or if you are so fucking dumb and gullible that you let him pull the wool over your eyes like that. He is screwing his boss, who is even grateful for it, and he’ll probably ask you for a raise afterwards! Unbelievable.” 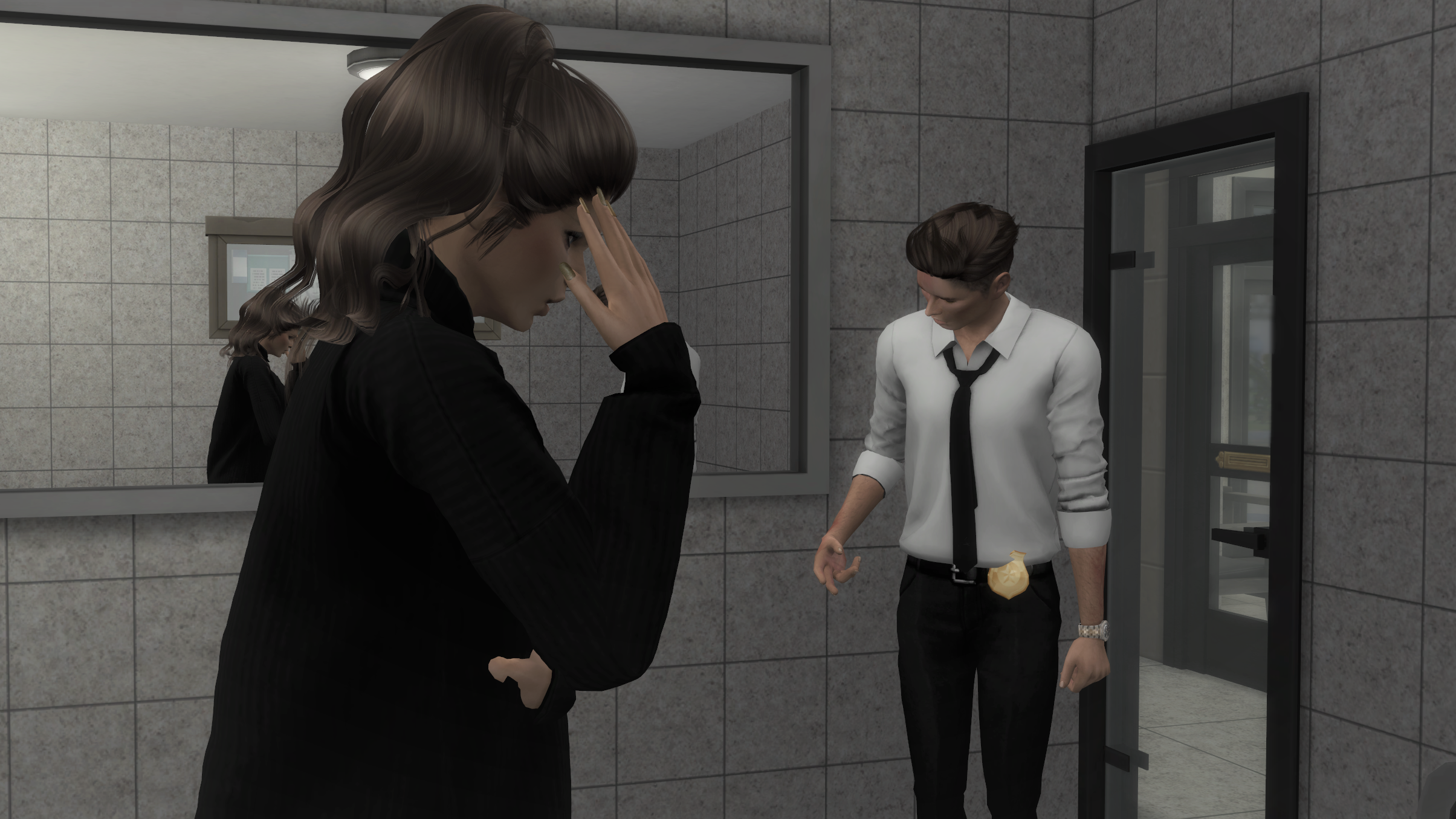 “No, you got it all wrong … it is totally innocent and best of all: it is working! Darrel and I … we never really kissed or … had intercourse. Nothing of the sort. Just kept working on getting closer and closer and I can stand being held on to now without freaking out. My heart rate barely goes up. That’s what he is good at, he knows how to speak to the inner fears and overcome them with a direct and forward approach.”

“Pardon me while I do cartwheels over you being able to stand another man near you like a happy couple, while you very recently tried to bust your own husband’s head in and stab our little daughter. So happy I could SCREAM!” Eric screamed the last word out, which eerily echoed back at them.

“Please, I know you are very upset but …”

“Upset? Nooooo, I am well beyond angry! I am fucking livid! I have been patient, understanding, forgiving, but I do not like being taken for a fool! All the while you have been playing your role while stringing me along, the smiling idiot, grateful for every little crumb you threw me! And I ate it all up! You run away screaming bloody murder when my hand barely grazes you, but have no inhibition playing tongue ping pong with your employee’s tonsils! What for though, Charlee?! That’s what I don’t get. If you do not want me anymore, than let’s cut the bullshit and make it real. End it. Divorce me. We’re pretty much there already anyway, what’s a piece of paper to close the deal, huh?!”

“Oh, right, because that is perfectly normal behavior. Well, then why have we been paying Dr. Holton if your employee is even more effective and you’re already paying him? You know we’re not rich. And why can you stand him holding you and sticking his tongue down your throat, but not me?” 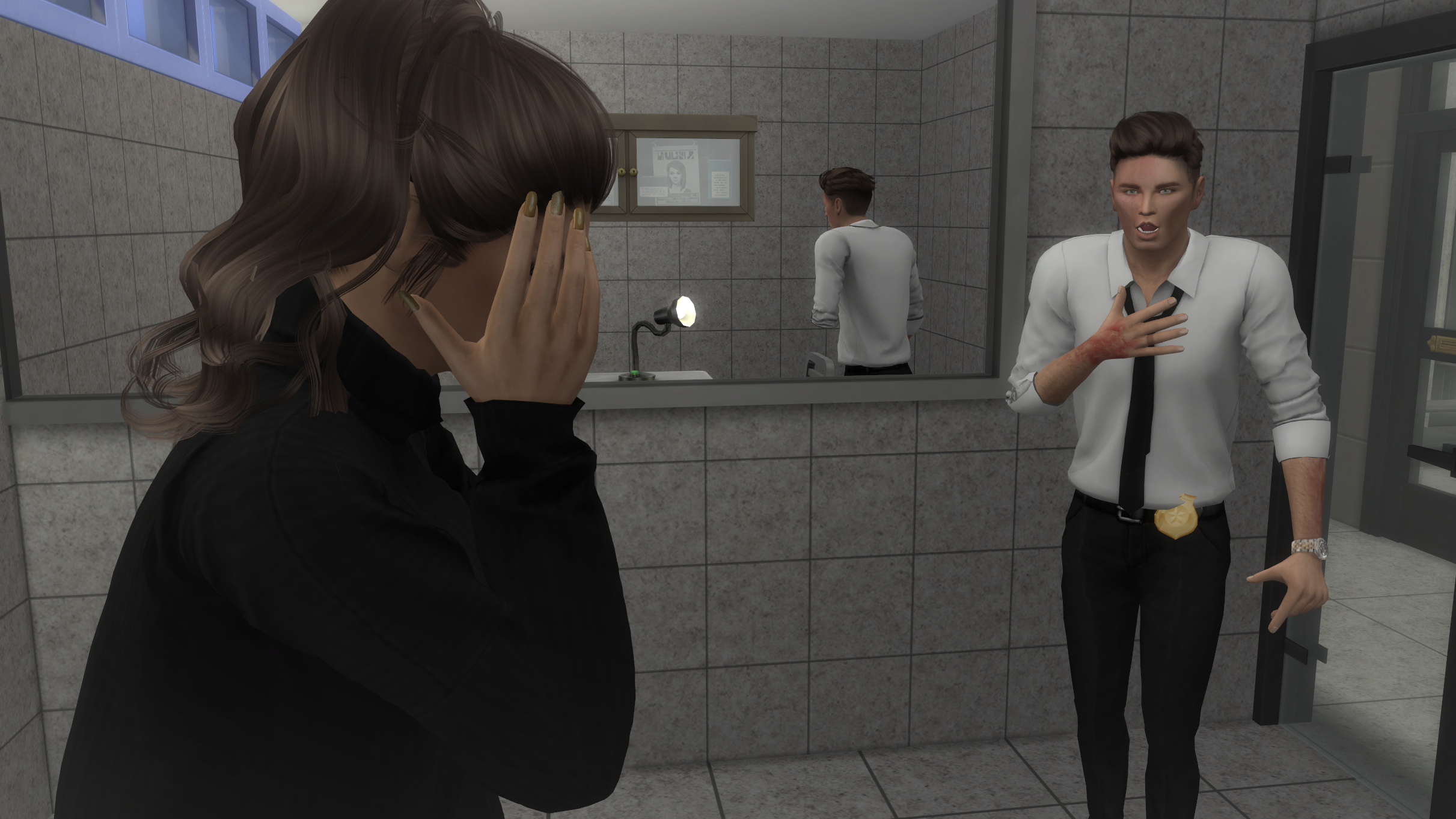 “But I can now. And he and I never actually kissed, nothing meaningful, let alone anything else! But I can do it now, be held, kiss … I am almost 100% certain of it. I can do it and even relax and enjoy it. Let me show you …”

She moved as if walking towards Eric, who shook his head, taking a step backwards, stopping her in her tracks..

“Charlee, really, no. That is the absolute last thing I want right now. You have to admit your story doesn’t sound very waterproof. And think how you would react if roles were reversed. I have a hard time believing you’d just shrug it off and welcome me back with open arms after you just caught me in another woman’s embrace! Honestly, it doesn’t even matter what exactly you have been doing with him, whether screwed him in the Gallery bathroom five times a day or just held each other while exchanging longing glances, you should never have done it – not for any reason. Dr. Holton instructed us to inch closer, not re-enact soft porn with self-proclaimed life coaches. If you really thought this was legit and innocent, why have I never heard about it until I caught you two?” 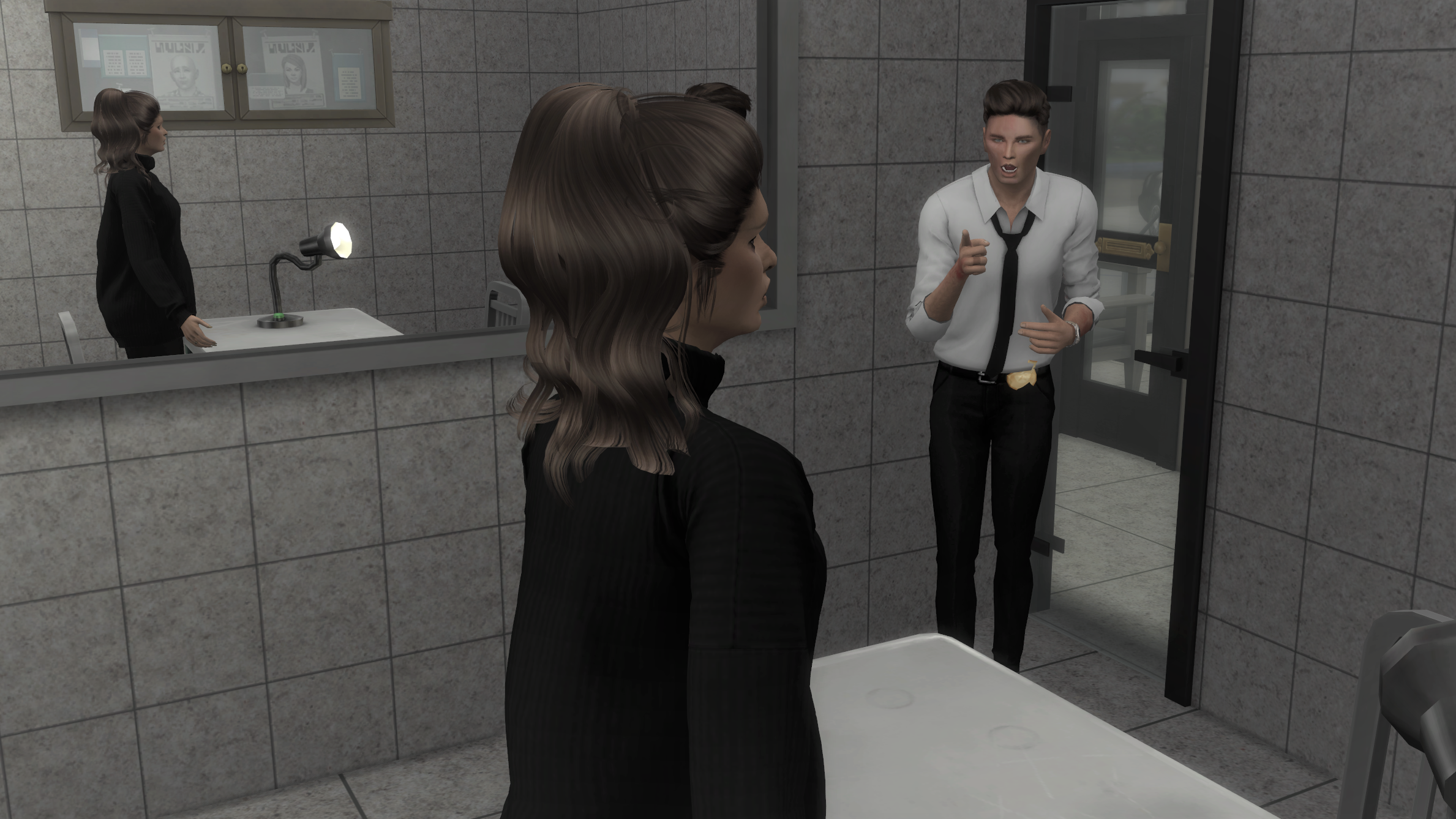 “I … I knew you wouldn’t like it, I know it is unconventional, but I was desperate to get better, make some real progress. You seemed so frustrated, and I was too, so I wanted something that worked faster than Dr. Holton’s approach. I swear. You do not understand what it is like, being in my shoes … ”

“Oh, right because I don’t have issues of my own and all is just happy jolly with a cherry on top for me. My life has been easy like a Spring morning.”

“Maybe you should go to sessions.”

“Right, that will help me with having been cheated on by my wife. Well, neither our good old Dr. Holton nor your life coaching gigolo are my type, since successful therapy evidently involves hands on contact. Call me when you find some hot chick I can screw until we both feel better, purely therapeutically, of course. Until then, I gotta get back to work.”

His words oozed sarcasm, underlining the depth of the pain he felt of the perceived betrayal. 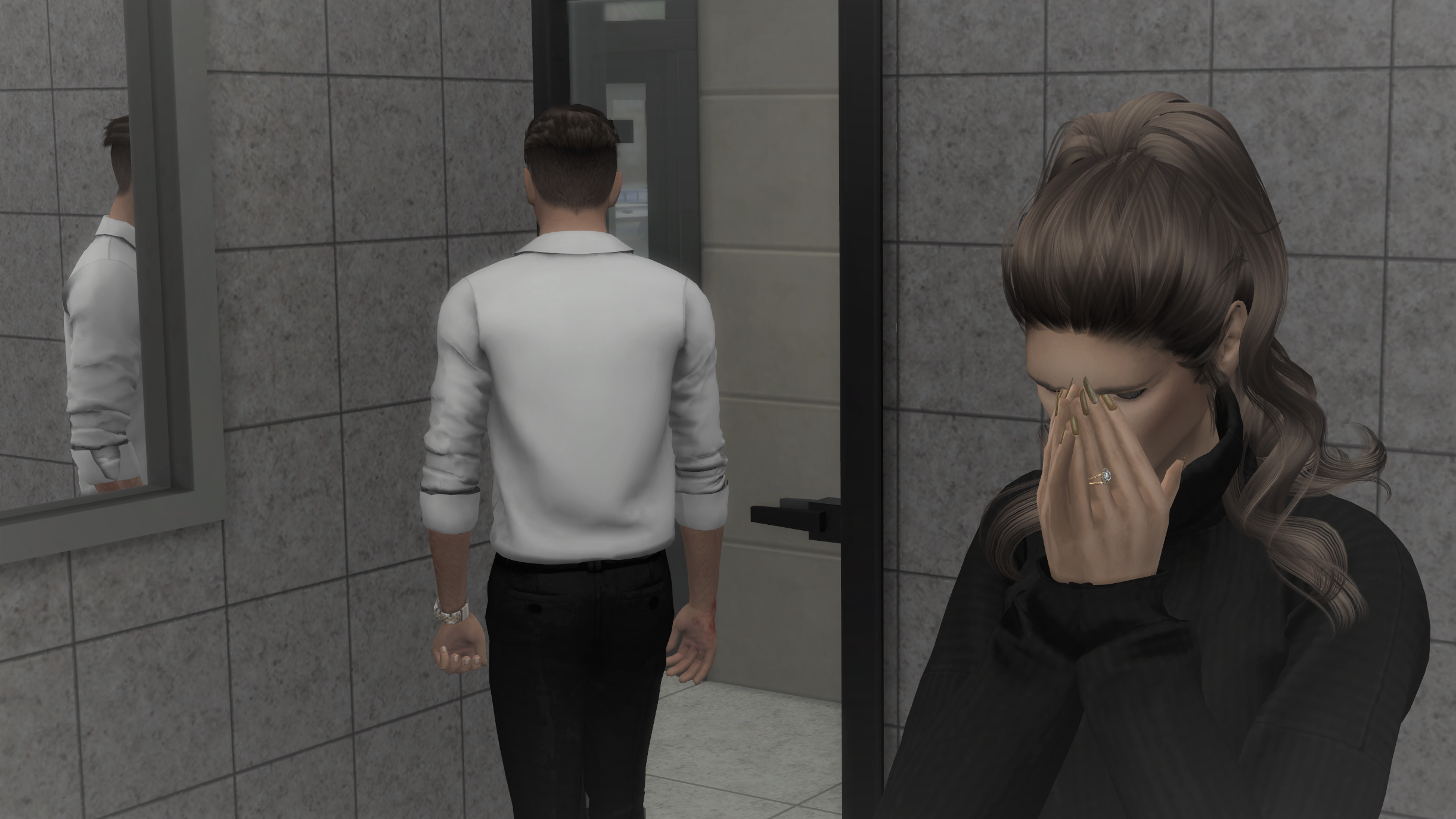 Eric turned on his heels and stormed out.

Charlotte held back the tears, then left herself, knowing he wasn’t going to come back. Not to the interrogation room and not home.
Not now.
Not later.
And the way things looked right now, not ever.
But hope, as they say, dies last.
Question was only, was there any hope left for them?